When Kiss Bee put out their promotion schedule for their upcoming single, I am aghast to see how many live appearances they had planned.  Not only that, there are additional events that didn’t even make it on to that original schedule.  Obviously Kiss Bee’s management are truly committed to making the new single, Dokkin Fuyaffuu a big success, an even bigger task since it is releasing opposite AKB48’s 49th Single.  But whatever, there’s room for more than one idol group in this world…obviously.  BTW, here is their new single PV… 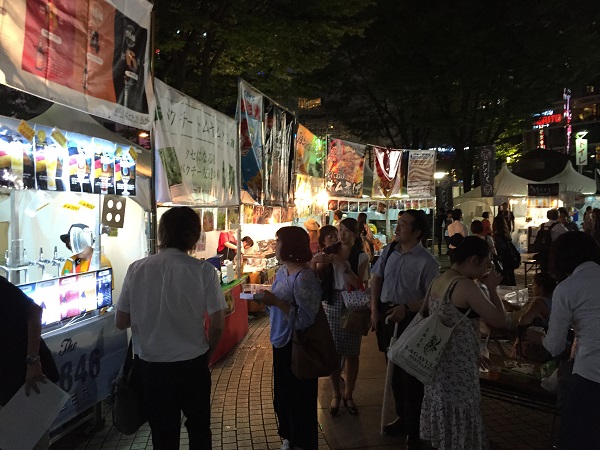 So checking Kiss Bee’s appearance schedule, I noted a few possibilities, beginning with their free live at HMV Isola in Ikebukuro.  This is one of my ‘go-to’ places for mini-lives, since it is quick and easy to get to from my apartment.  I got to West Ikebukuro early to grab some dinner, and I was pleasantly surprised to find the Oedo Beerfest going on in the park across the street.  I did grab a couple of beers (including one called ‘Vanilla Ice Cream IPA’) and made note to come back the next day to enjoy the festival properly (which I did, LOL)  But for this day it was about seeing Kiss Bee, so upstairs I went. 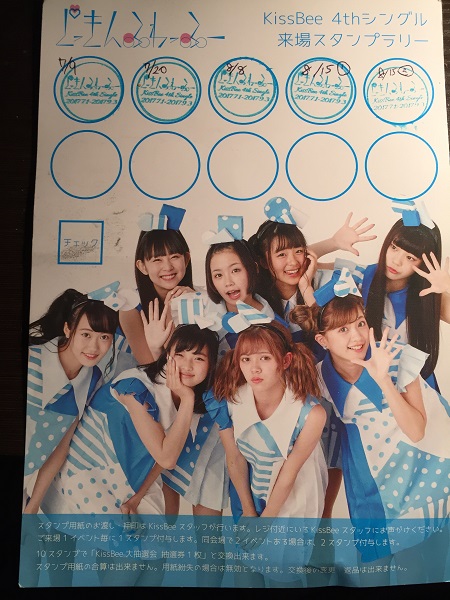 It was the typical Isola setup.  I have actually seen Wasamin here on multiple occasions, as well as FESTIVE and Chaki.  I bought three copies, with the intention on meeting at least two different members, and grabbed a spot around four-back from the stage, which was good since the place really filled up by showtime.  That of course was after I got all of my Kiss Bee promotion cards stamped.  I have one card where they mark all of the CDs you purchase, and another for each event you go to.  You need to purchase A LOT of CDs to win anything with that card, so I will probably just keep that as a souvenir.  But for the event card, I may come close to filling it up.  We’ll see… 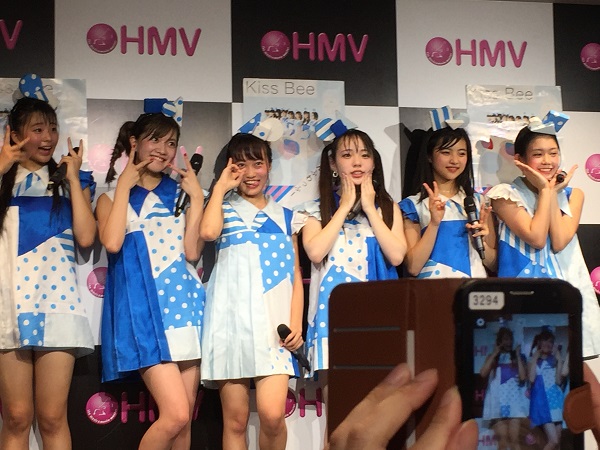 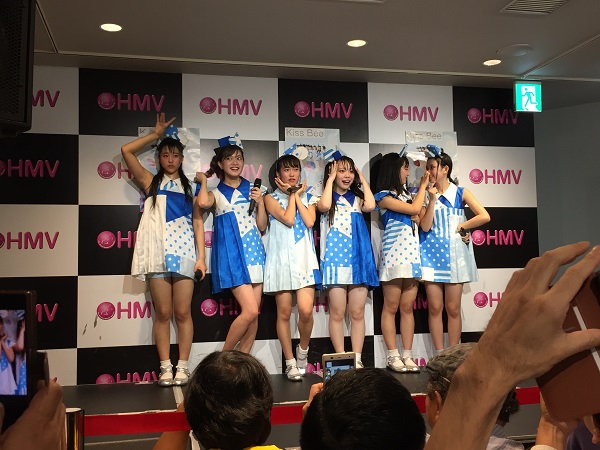 This was supposed to me a “mini” live, but they ended up performing for over 50 minutes.  And if you include the pre-event rehearsal, which they do in front of the fans, over 55 minutes.  So this was almost like a small concert.  So the fans really got bang for their buck, or at least for the CDs they purchased.  Afterwards it was time for perks, which always starts with a free high-touch for everyone in attendance.  After that, they offer three perks, in order.  The first is a Group-Shot, which costs four tickets, then a cheki (2 tickets), and finally a handshake/signature (one ticket)  For the signature you can have the member sing a cheki, a cd, or she will sign and give you a photo.  So the system is fairly easy, although I think it’s kinda steep when a signed cheki ultimately costs 3000 yen, which is why most of my chekis with Misaki-chan are unsigned. 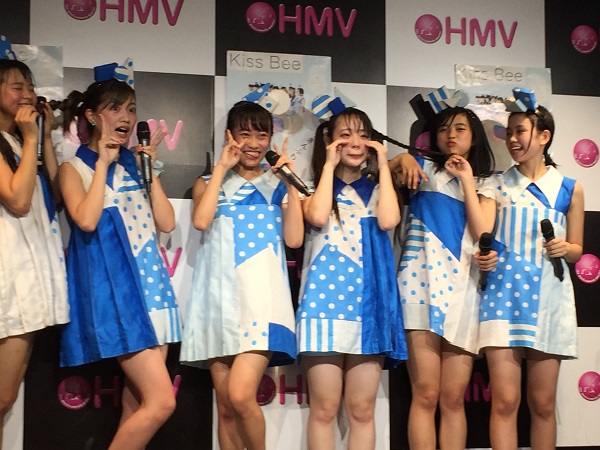 When I purchased my CDs, I originally planned on seeing three different members, but ultimately I used ALL of my tickets on Misaki-chan, one for a cheki, and another for a signed photo.  Oh, and a funny thing happened.  When my turn came to do the cheki, Misaki-chan, said “Hi Chris!  Chris is your name, right?  I thought so.”  Like with Miyabi from Minyo Girls, I had never mentioned my name to Misaki before.  In fact I think the only one in the group I had ever said my name to is Reon, but I had a sneaking suspicion how she knew it, which was confirmed at Saitama. (part two of this post)  Anyway, my cheki and autographed pic.  Since Misaki likes making weird faces on stage, I kinda like to do the same with her in photos…

During the handshake Misaki asked me where I was from, and I told her about the festival outside.  In fact, when the event was over I headed back down to get one more glass of that Vanilla Ice Cream IPA, before jumping on the bus back home. 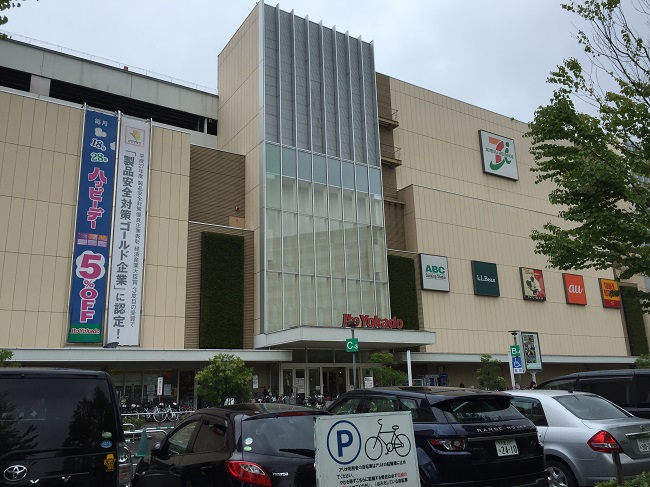 So my three-week vacation is turning out to be a total idol fest, despite the fact that Wasamin hasn’t been performing locally at all.  That will change next week when she does her new single promotion.  But for this week my schedule has been filled with events, beginning with the AKB handshake event, Minyo Girls, two Kiss Bee events, and THREE No Plan events, which I plan on writing my next post about.  I also had the opportunity to see FESTIVE on Monday, and was standing right in front of the club entrance, but decided against it since I had already spent enough money that day, and didn’t want to overdo it.

Kawaguchi is the first train stop in Saitama after you cross the Arakawa River, which makes it very easy for me to get to since I live on the Tokyo-side of the river.  Kiss Bee would be doing two shows at the local Ario/Ito-Yokado Mall, which brings back so many memories of going from mall to mall to see Wasamin back in the day.  Yes, I have been to quite a few Ario/Ito-Yokado locations over the years.  The stage was set up in the center court of the mall, which meant there would be tons of foot traffic going by the events.  I got there a little early to check out the crowd, and to have a little bit of lunch before the event started.  Like at Ikebukuro, I bought three tickets, intending on doing handshakes with three different members.  However, once again my plans changed. 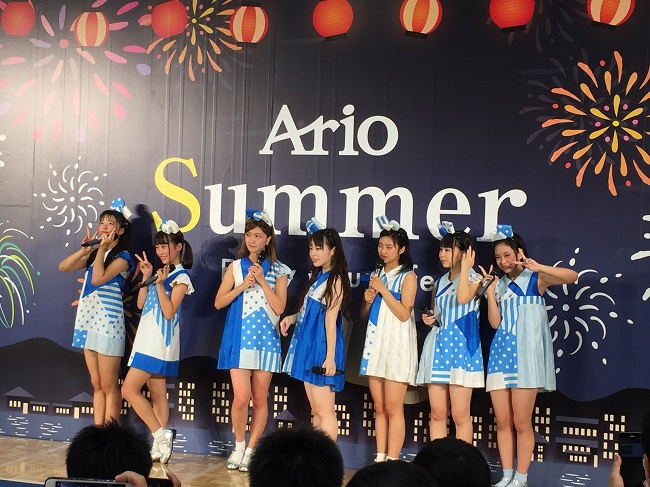 I grabbed a standing spot just behind the seats, and was ready to go.  Although the Kiss Bee fans seem to keep the fan antics at a minimum during the mall events, I am pretty sure that is by instruction from group management.  So you don’t here much chanting, or see much dancing.  Mostly clapping, and that’s it.  During the show I am usually paying attention to Misaki, but sometimes I look for members who are also impressing me, and the more often I see this group there is one member who I seem to grow more and more fond of each time, and the funny thing is that she wasn’t even on my radar when I first started liking this group. 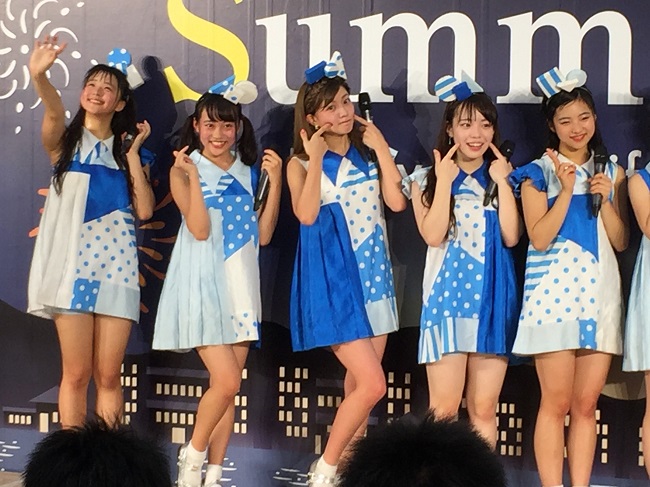 So after the high-touch, and almost winning one of the signed posters (I swear I am going to win one of those one day!) I decided to use my first ticket on that member who has been really catching my fancy lately.  I feel bad too, since every event I swear I am going to visit Sakura again, who I like also.  But this time I felt compelled to go and see Reon again. 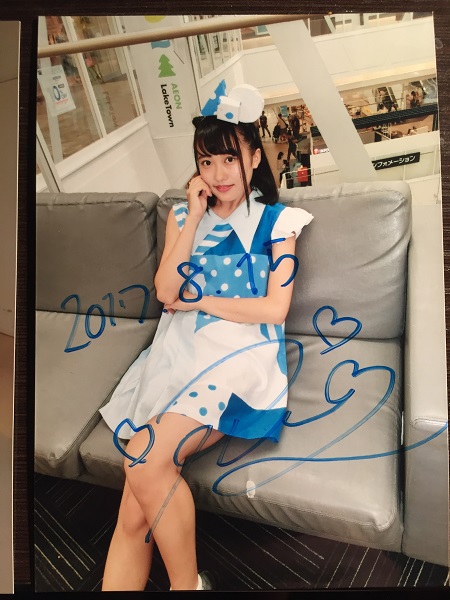 Reon isn’t a popular member in this group yet, and her line is usually one of the shortest.  But I love her smile, and I do catch her looking at me once in a while.  Anyway, she immediately asked me my name again, and I told her that I thought she did a great job on stage and that I like her smile, which she reciprocated.  Then she asked my what I liked about KissBee, and who my favorite member is.  I lied and told her I was a Kiss Bee ‘MD’ (Minna Daisuki)  But I couldn’t think at the time of how to explain why I liked the group.  I guess that meant I needed to see her again. 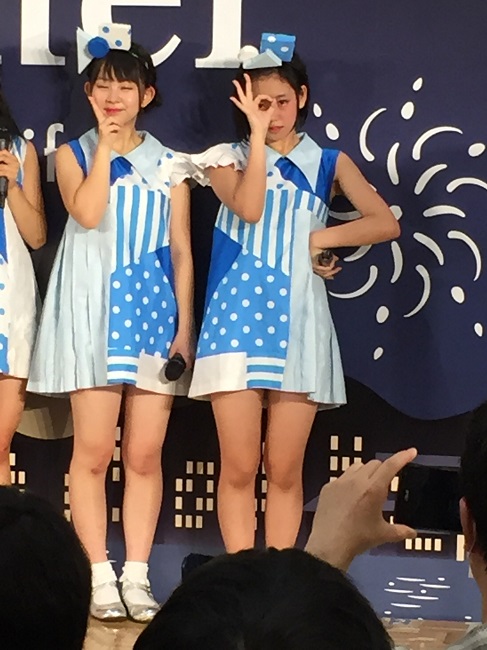 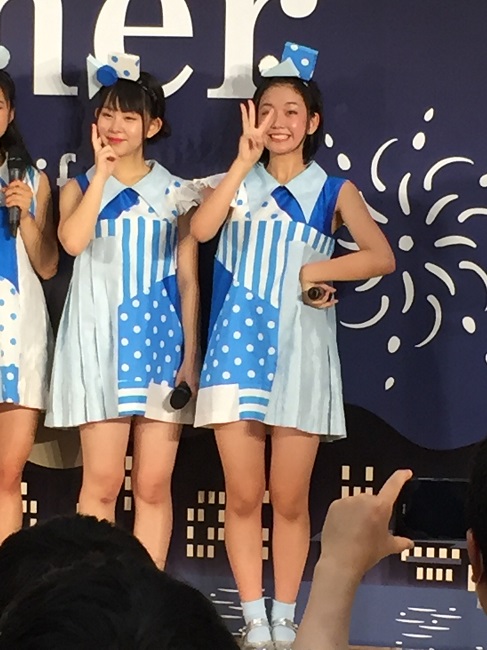 When I saw Misaki, she immediately greeted me as Chris, and then she asked me what ‘CK’ means.  Aha!!!!  Apparently another one of my personal Twitter Fan Club, LOL.  So I explained that C is for Chris, and K is the initial of my family name.  I also mentioned that I liked that they were at this location wince I live near Akabane (one stop away)  Anyway, I didn’t do a cheki because I heard they were doing a special costume for the second performance.  However, that meant I had to get at least 1-2 more tickets. 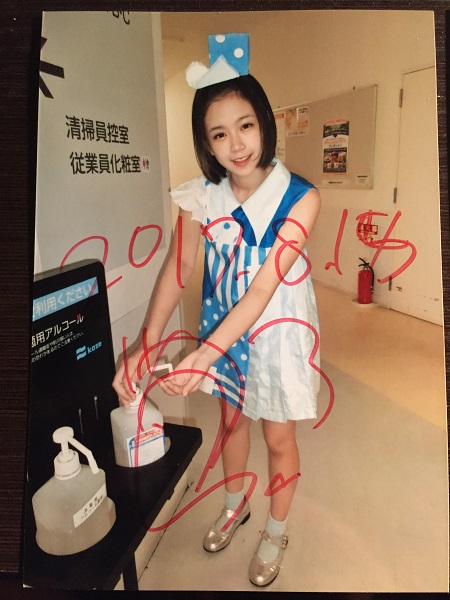 The break between performances wasn’t very long.  I had time to get a drink, plus one lap around the mall (they had some good looking restaurants) before coming back and staking out a spot.  Another interesting aspect of Kiss Bee performances is that they rope off an area for photography.  Yes, you can take pics of their entire show, as long as your are in that section. 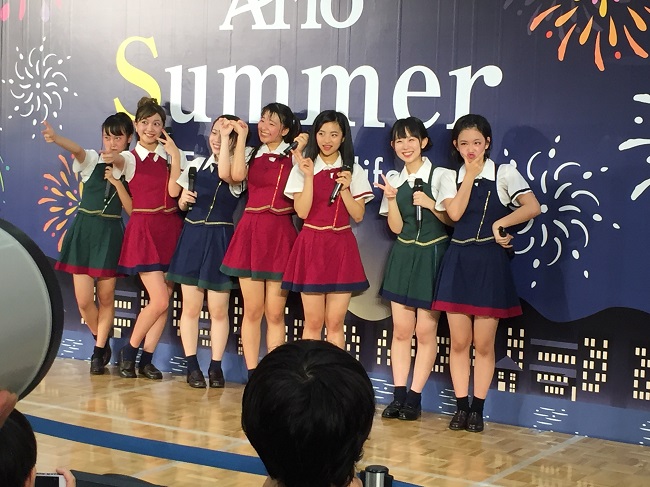 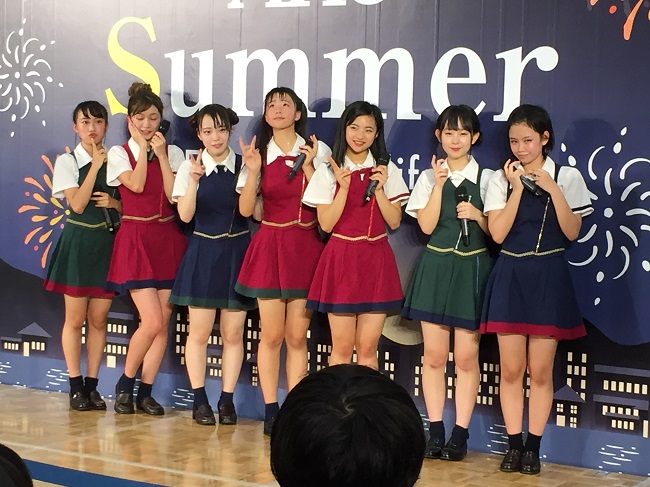 Anyhow, the girls came out for their second set.  BTW, a couple of the songs they performed I had never heard before.  One was called Puppy Puppy, which they played in both sets.  One of the things I like about Kiss Bee is that their songs have an interesting style to them.  They aren’t all idol sounding tunes, some of them have a jazzy feel to them, which I think makes them unique.  At the end of the show they were promoting their appearance today at Tokyo Summerland, which I didn’t plan on attending.  Good thing, since it has been pouring rain all day.

I saved my cheki for this event, so I could get a pic with Misaki wearing the different outfit, which I guess was some kind of Catholic School Uniform?  I don’t know.  What do you call that style?  Per usual, I went for a goofy pose, since it just fits her style too well.  I always say that Misaki-chan reminds me of Maeda Atsuko, if Acchan had a goofy personality.  Misaki is ALWAYS making silly faces before, during, and after the show. 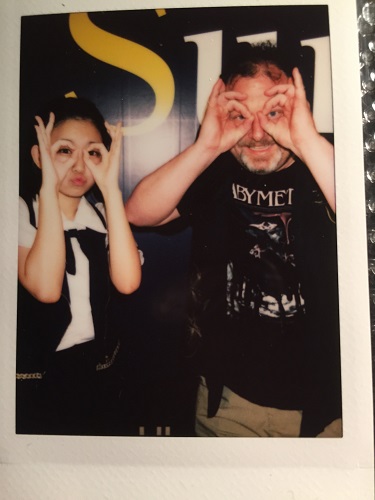 After that I had one more ticket left, and I really wanted to see Reon again.  So this time I was prepared, and I explained to her how I stumbled upon the group accidentally during Golden Week, but didn’t do any handshakes after the show, but then came back to see them at Venus Fort.  And that I tweeted photos from their performances all the time.  At the end of the day, I think I found my true #2 girl in Kiss Bee.  Sorry Sakura 🙁 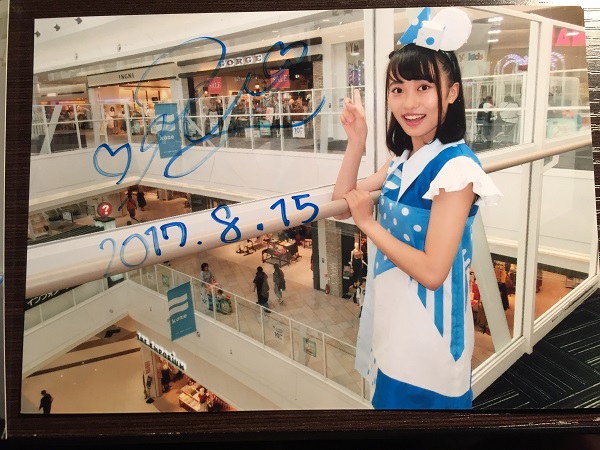 And that was it.  By this time it was raining pretty hard, sI made it back to the station and eventually back home.  I’m not sure when I will have my next chance to see Kiss Bee since my schedule is pretty busy for the next two weeks.  But I am sure I will see them again before the new single comes out.