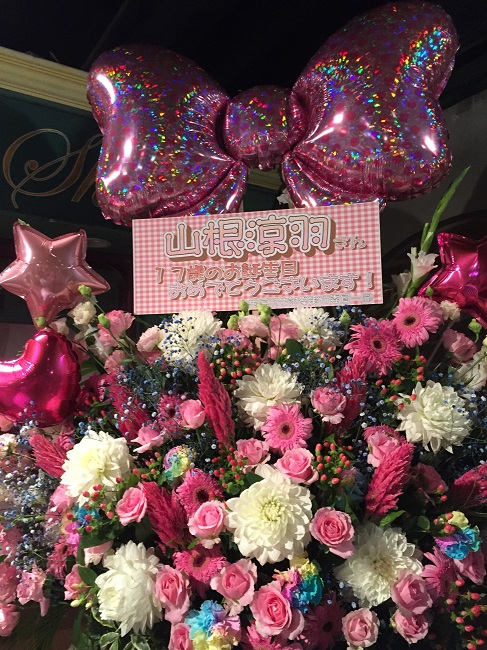 There are some who say that who you list as your oshimen on the AKB48 Ticket Center actually matters, and that it improves your chances of winning your oshimen’s birthday show, or any show that they are performing in. There are others that say that is a bunch of hogwash, and that it is purely by chance. But it should be noted that four months ago I changed my AKB48 Oshimen on my account to Zunchan, and lo and behold, not only have I won a lot of 16th gen shows, but I also won her seitensei performance. So I am a firm believer that who you list on your ticket center account actually does matter, and not only from this experience, but I have other firsthand experiences that tell me the same thing. Anyway, I won my “AKB48 Oshi’s” birthday show via ippan. What could be cooler than that? Except…

I actually already had plans for Thursday night. Another idol I am a big fan of, Yuki Himeri, was performing a free live in Yoyogi on Thursday night. Himeri used to be in Alice Project. After graduating she joined a group called No Plan, but is graduating from that group this weekend. I am definitely going to the graduation performance, but I also wanted to see this show since it featured another idol I saw for the first time recently and have developed a little crush on, Kurosaki Reon, who is an anime singer an gravure idol. 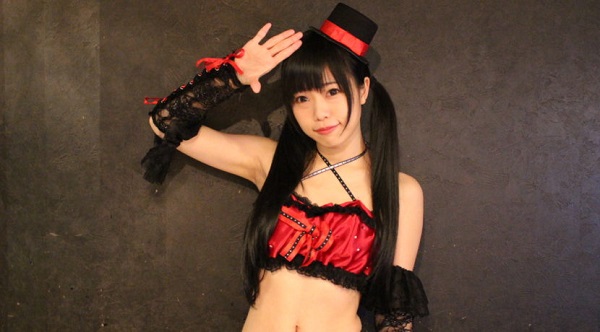 I think she is really cute, and am amazed by the fact that she is in her LATE 20’s!!! Anyway…

I was off to Akihabara, which was good since my computer mouse crapped out the day before, and I needed to pick up a new one. So after my quick trip to Yodobashi Camera, I made my way to The Hub for a quick pre-show cocktail. As I was walking near Akihabara Station I noticed someone really familar standing by the taxi area on his cellphone. I couldn’t be sure, and I didn’t want to bother him, but I was almost positive it was Sasou-san, who is one of Wasamin’s assistants. My suspicions were correct when I saw what Wasamin was up to on Thursday afternoon. 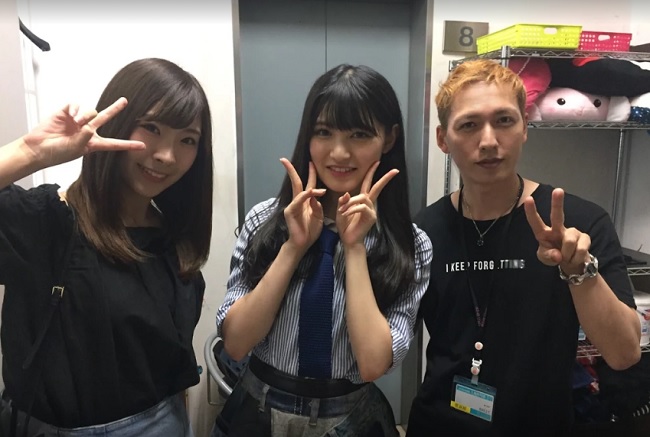 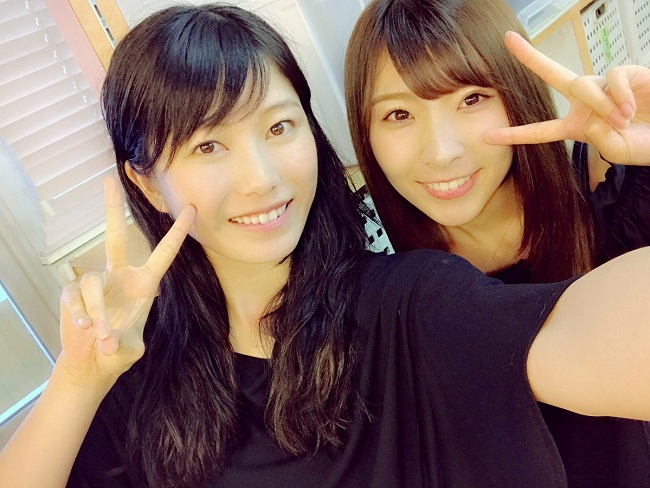 So Wasamin and I crossed paths, sorta. I guess she was at the theater to give Jiina tips on singing Saba Kaido. I’ll have to talk to her about this when I see her next week. So back to the show. This is my 36th Theater win, 34 in Tokyo and 2 in Nagoya. I finally got up to the theater around 25 minutes before the check-in deadline, found a locker to store my stuff, and went to purchase my ticket. I got ticket #101. Cool, that means when my group gets called I will be the 2nd one in. Hopefully we will get called in early. After chatting with a couple of fans who wanted to know who my oshimen was, as well as seeing another Wasa-fan who also won the show, I went to line up. I tried to get some photos of Zunchan’s birthday flowers, but there were too many people crowded in the lobby at the moment. The lottery finally started, the first group to get called in was #110-119. Damn!! I should have waited a little longer to show up. Second, #120-129. Group after group was called, and my hope for getting a seat, or a good vantage point sank lower and lower. After eighteen groups had been called, I was in the final five groups (40-49, 80-89, 90-99, 100-109, 151-159) Finally we heard our number. After going through the metal detector, and quickly gathering my stuff, I looked to see where I could possible stand… 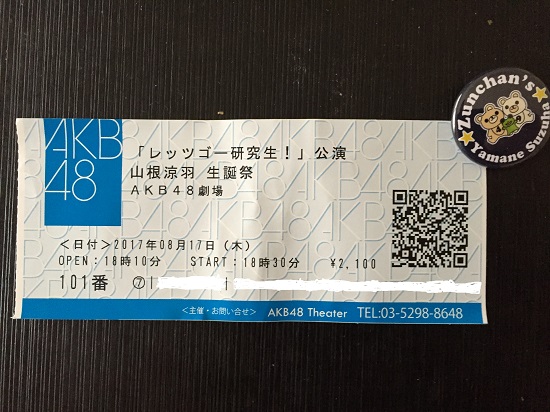 My ticket, and the button we received in our seitensei goodie bag

As I walked in they announced there was one seat left, but before I could grab it another fan ran past me and took it from me, drats! I considered standing in the center, which was only two people deep, but then I saw the upper rail was practically empty. This was perfect!!! For those of you who have never been inside the theater, just to the right of the tech booth there is an elevated standing area, which allows you to see over the heads of anyone below. So while it is in the back of the theater, it pretty much gives you, aside from the right pillar, an unobstructed view of the stage. So as bad as my draw-in was, I still got a relatively great spot. Satisfied with my ultimate luck, I got ready for the show… 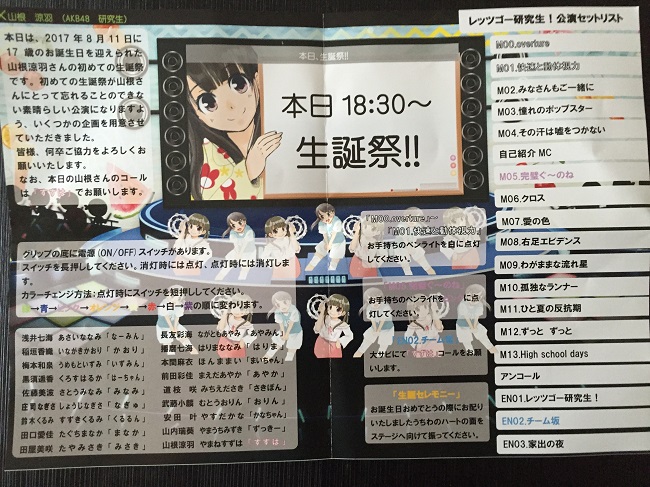 Birthday show instructions, front and back

One of the discussions we recently had in the thread for this stage on the  Stage48 forum, and in the forum chatroom, is whether or not this is a good setlist, and suitable for the 16th gen kenkyuusei. Some say it is a bit too heavy on B-sides, and obscure theater selections. Personally, I think that is what makes the setlist great. In fact, I contend that these theater songs are some of the most beloved of theater fans back in the day, and it is great to see them getting revived. The one issue I had was that the first time I saw this stage, which was the second ever performance, I didn’t think the girls were well-practiced enough, and at times the performance was lackluster and disorganized, especially in the beginning. After watching this performance, I still say the members need more practice, although this time the problem that stuck out to me was bad lip-synching. In fact at times it seemed as if some of the members weren’t even sure of the lyrics. LOL.

Since it was Zunchan’s birthday, the opening MC was all about her. However, there was a point in the MC where everyone congratulated Umemoto Izumi for finally getting a chance to perform. She became very emotional, but unfortunately she was standing in the exact spot that the pillar blocked me from seeing, so I pretty much missed it.

As for the standout members, I cannot overstate how much I think Zukki is a total pro who is totally ready for promotion. Normally she looks very young, and skinny, but she transforms during Migiashi Evidence, and absolutely owns the performance. I had also mentioned before that there was a member who stood out to me last show who I really liked, but I didn’t remember who she was. I may be mistaken, but I am fairly certain it was Kurosu Haruka. Just something about her presence that I like. I will also say that Yasuda Kana continues to impress me with her performance intensity, and that I am starting to like Asai Nanami. 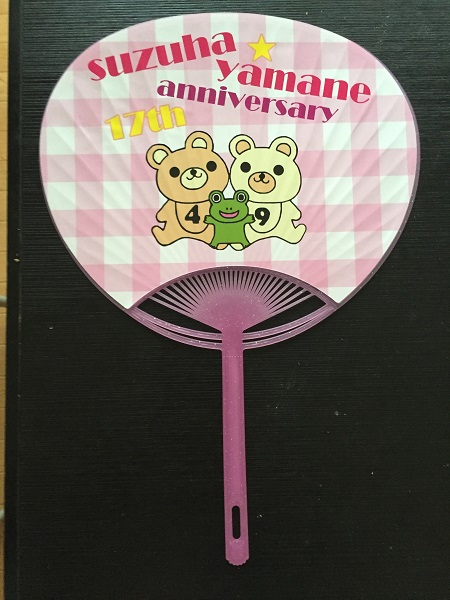 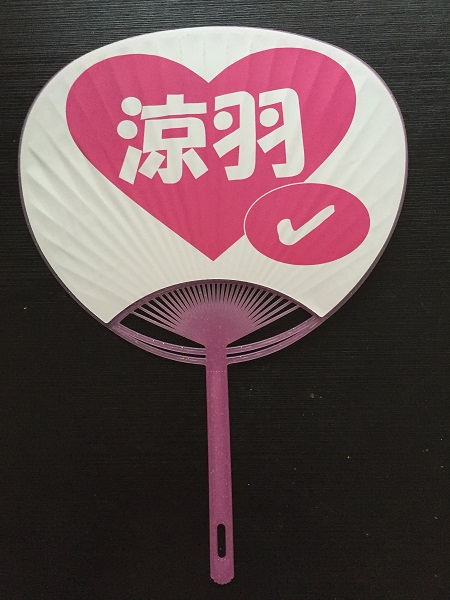 Zunchan birthday uchiwa, which we all waved after the last song

But this show was all about Zunchan, so like many others there, I paid a lot of attention to her throughout the show. I am amazed by her overall stage presence for so many reasons. First of all, that adorable face and smile just melt my heart. The one big thing I notice about her is she is always emoting. Always! There is never a point where she isn’t expressing herself with her face. Whether it be a smile, a silly face, a gesture. She never loses it. The other thing is that she ALWAYS looks like she is having the time of her life up there. She has tremendous positive energy. I just think it is hard to watch her perform and not smile. This was her seitensei, so she was in very high spirits anyway. But she is always like that. It just confirms to me why this girl is quickly rising to be among my favorite 48-group members.

Since I was fairly far back, I didn’t get much facetime with the members, that was until the end. At the last MC Ayamin noticed me in the back and was trying to get me to wave at her. I noticed her glancing at me a few times again right before high touch. She gave me an elevated greeting during high touch as well. Also, Orin gave me an English “Hello!” as did Zunchan who is becoming more familiar with me, especially since I have done handshakes with her at events. 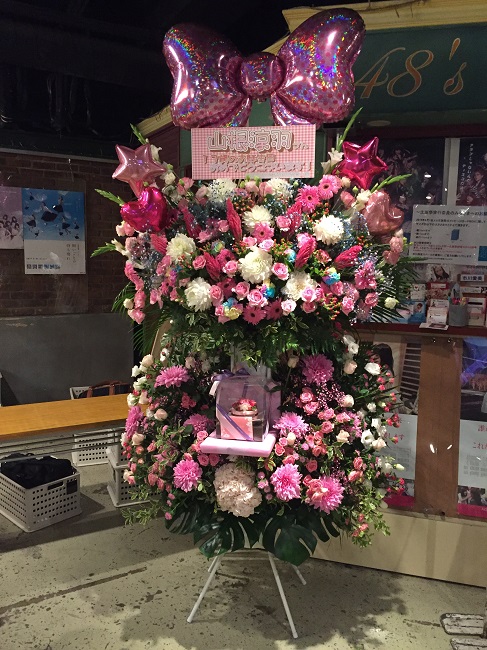 I forgot to mention, before high touch, they showed the SHOWROOM Senbatsu Music Video while staff got everything set up. All in all, it is a very cute music video, and a great showcase for Nakai Rika But Zunchan’s lack of screentime was noticeable, especially at her birthday show. You could tell that fans were waiting to cheer for her when she was on screen, but she is barely in the video, and usually just for a split second. Ultimately, I like the MV, but the song is just okay. Anyway, as I exited the theater, I had my chance to get a better photo of the birthday flowers, and then I headed out for a late dinner, and ultimately back home. 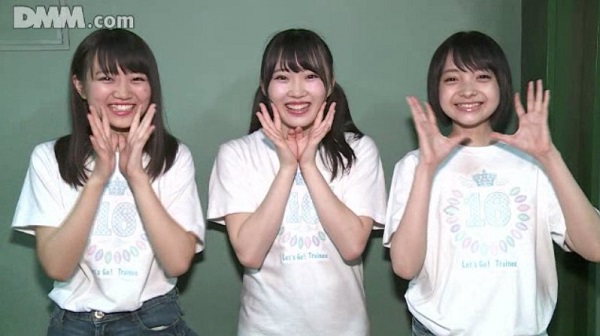 Next week I am very excited because Wasamin will be holding events all week to support the release of her ‘new’ Memorial version of Saba Kaido. It has really been a while since I have had a chance to properly talk to her. So I am really looking forward to it. If any of you are in town, she will be at Tower Ikebukuro on Tuesday, and Tower Shibuya on Wednesday. So come on out!