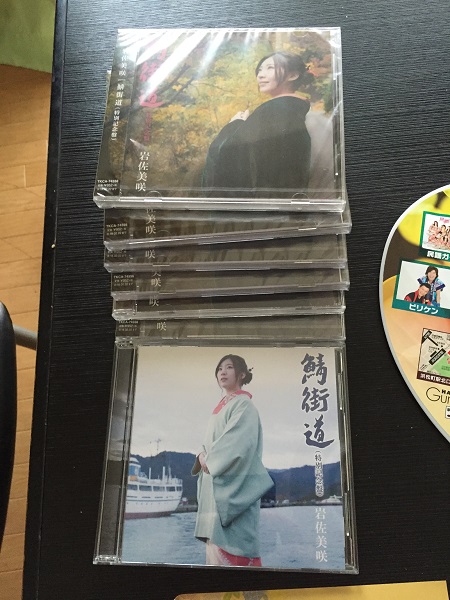 Wasamin returned from her big trip to Brazil, and had little time to rest before she started promotions for her new single release. By the way, the new single debuted at 25th on the Oricon singles chart this week. Wasamin has 7 appearances scheduled over an 8-day span, beginning with an appearance at the Meiji Gaien Fireworks Festival on Sunday. I didn’t go to this event, although originally I wanted to. However, given an apparent schedule mix-up it was probably for the best anyway. Here is the setlist. Wasamin and Hayabusa performed together… 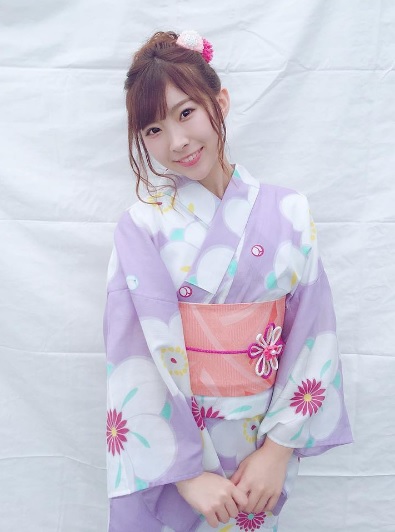 Ticket Pia was once my favorite Japanese online site to purchase tickets from. However, lately I’ve been having trouble with their system. There was a show recently I tried to purchase tickets for, and it would not let me use any of my credit cards. Not to mention it would no longer allow 7-11 payments. I recently got an email from Pia saying my card is registered and now usable. But when I went on to the site to get a ticket for this event, 1) the tickets were super expensive, and 2) there were only really crappy seats left, with a noted ‘Poor view” of the fireworks. And after all, Wasamin was only the opening act. The headliners were Miwa and The Brilliant Green. Not that I would mind seeing Miwa, I just didn’t feel like doing it in an outdoor stadium in the Summer with a really crappy and expensive seat. So I skipped the show entirely, and I guess that was a very good move because…

Apparently the tickets and the website said the doors would open at 4pm, and the show would begin at 5:30pm. What it didn’t say was that 5:30 was the curtain time FOR THE HEADLINERS. The opening acts (there were four) were all performing before the curtain. So many f the Wasafans were caught off-guard, and missed most of, and in some cases ALL of her performance. After I heard that story, I was glad I skipped the show. 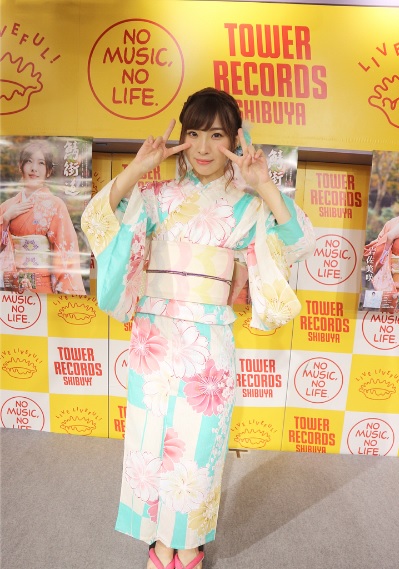 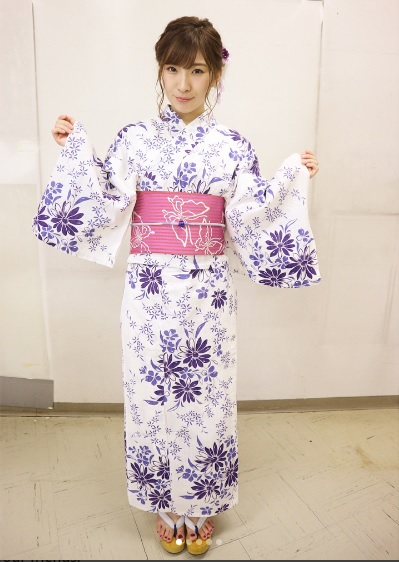 I was able to make it to both of the Tower Records events, but I was busy today, so I couldn’t see Wasamin’s challenge campaign. But those are the perils when you go a free show at lunch time in the middle of the week. For Wasafans, it was the first time in quite a while that any of us really had a chance to talk to her. Aside from her Monthly Challenge Campaign appearances in June and July (neither of which I was able to attend) it had been over 2 1/2 months since she held a live/handshake event. So I had a lot to talk with Wasamin about. In fact, it had been a while since I wrote her a proper fan letter, so I had one ready for delivery at Shibuya…

For me, it is quite the undertaking to write a fan letter in Japanese. This one actually took me two days to write. I started writing it early Tuesday afternoon, but I hadn’t completed it by the time I needed to leave for the event. So, instead of rushing it, I decided to finish it the next day, which I did. As I have mentioned before, one of the best gifts you can give just about any idol is a fan letter. I am yet to meet an idol that doesn’t appreciate it.

Wasamin was mainly promoting some of her upcoming events, especially her next concert in September, as well as her solo dinner show in October. I have already sent in my application and payment for both of those events, as well as for her Love Live acoustic concerts in November. So I am all set. Well, almost all set, as she just announced a couple more events. Yamano Music Enka Festival, as well as a special Wasamin Mobile Subscription event. Unfortunately, and surprisingly, I do not have Wasa-mobame, so I am ineligible. But I will head down to Ginza next week to apply for the Yamano Music show. 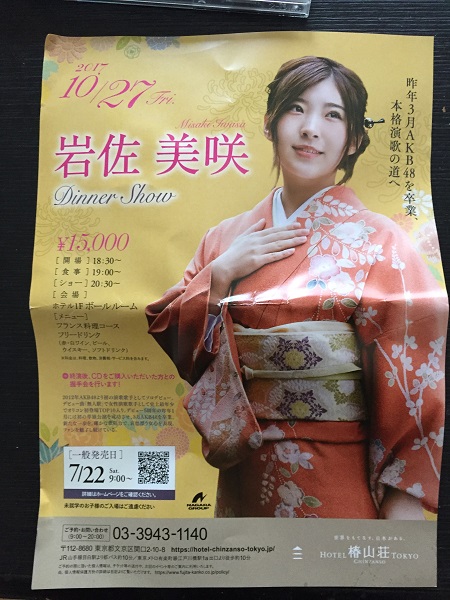 As for my six handshake opportunities, it was mainly Wasamin and I catching up. Wasamin notices that I am one of the few fans that mimics her hand gestures while she sings, especially on Saba Kaido (I do it on a couple other songs too) She remarked on Tuesday that she is impressed that I know the entire song. During my last handshake on Wednesday, we both did it together. I also asked her about her visit to the AKB48 Theater last week, and told her I was there too. At first, she was like “How did you know I was there?” I was like “Twitter of course! And then I told her that I had won the evening show, so I was there too. Oh, I also had the chance to show her the Wasamin concert DVD cover I made for my Photoshop final project. To be honest, it was really poorly done, but Wasamin liked it, and showed it to the Tokuma label rep who was there too. 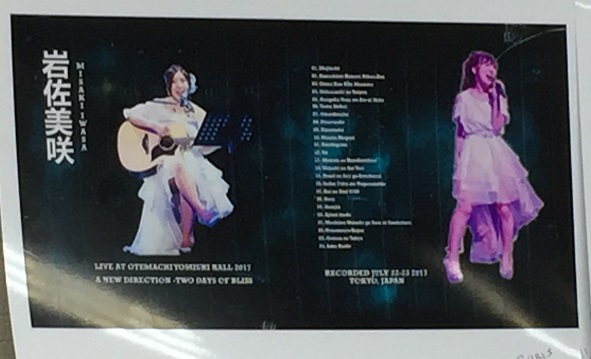 She asked if I was coming to the Chiba event the next day, but unfortunately I had orientation all day, but I said I would see her on Friday. Unfortunately that ended up being a lie, since I wasn’t feeling that great Friday afternoon. So I ended up going home to rest before heading out to see Wasamin (and Minyo Girls) But, I ended up falling asleep, for FIVE HOURS! When I woke up, it was too late for me to make the event. Wasamin gomen! 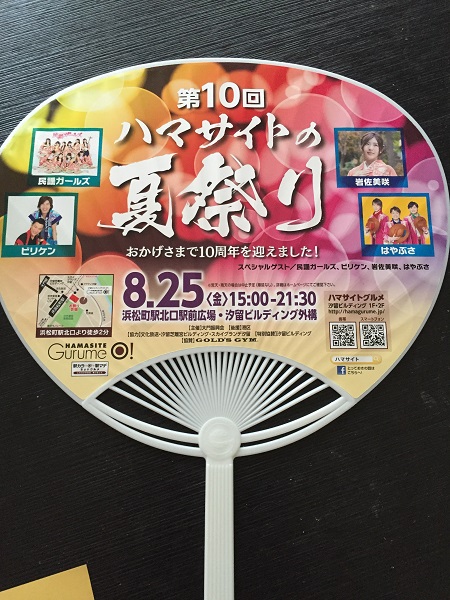 Uchiwa was a bonus giveaway at the events, promoting the Friday appearance.

Finally, Wasamin announced the release of her third concert DVD/Blu-Ray this coming October. Details are still coming in, but the item description says it is one-disc only, which basically says to me that it is only one of the concerts. Which one, I don’t know, since on Ichikawa-san’s blog it doesn’t list the “roaming the audience” or “guitar” portions of the setlist. I’m not sure if that means they will be omitted, or if they just aren’t sure yet. I believe, based on what I read, is that it just isn’t decided at this point. And anyway, it is probably best to keep it to a one-disc release since she does a lot of promotion for it at events, and that would be pretty tough, to get fans to shell out over 10000 yen at every event for a 2-shot.