Obviously I have been ‘chomping at the bit’ to talk to Wasamin ever since I last saw her, especially since she just spent last week in San Francisco, at an event that I certainly wanted to be at, and would have been at under different circumstances. I would have loved to spend time with Wasamin in the town I spent over 20 years of my life living in, but at least I have the luxury of seeing her regularly here in Tokyo. Suffice it to say, we had a lot to talk about today.

I made it over to the Tokuma offices before noon, since her manager,  Ishikawa-san, announced on her blog that they would be selling ‘day-of’ tickets for this event on a lottery basis. This was originally a Chara-ani preorder exclusive, but since they didn’t sell out they made tickets available today for anyone who wanted to come. Ultimately they had enough tickets that it wasn’t really a lottery. Basically anyone who wanted tickets could buy however many they desired. I personally took advantage and purchased three extra tickets, so now I had six, 2 for each slot. The original lottery number drawing ended up simply being for queue position. I would be third in line for the first slot.

They had us queue up early enough to see Wasamin and Ishikawa-san show up and enter the building. Per usual, Ishikawa-san is all smiles, and waving to us, while Wasamin keeps her head down, mask on, baseball cap low over her eyes, and doesn’t pay any attention to us. LOL. However, most of us know that Wasamin likes to keep a low profile outside of events, so we don’t really try to engage her in situations like that. Btw, the outfit she had on was adorable! Wasamin is very stylish.

Wasamin and I mainly spoke about San Francisco for most of the day. Here are the highlights… 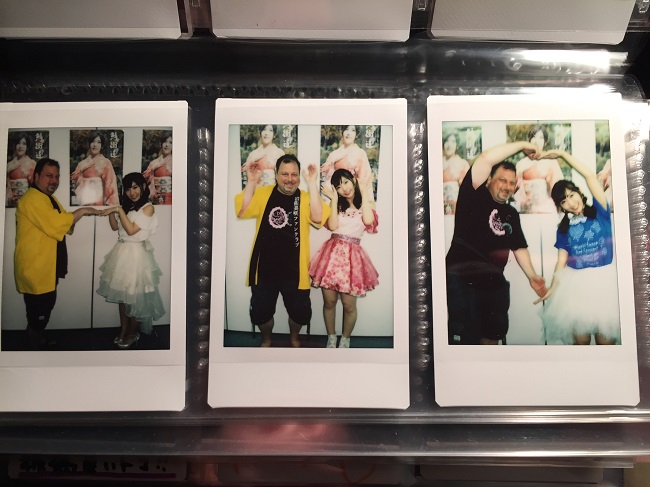 Photoset #1 (BTW, these are the costumes from her July concert!)

Slot One: The first thing Wasamin said to me when I walked in was “Chris-san has a lot of friends in San Francisco!!!” I said Of course, and asked her what she thought of ‘my hometown’ She said San Francisco was beautiful, and she really liked it. “Good, I want to hear more San Francisco stories” She then told me that she ate steak every day, LOL! She also mentioned that she saw Alcatraz, but of course the way she pronounced it was very Japanese. (Arukuturazzu) So I repeated it back to her like I say it.

For our second pose, we decided to do ‘Golden Gate Bridge’. I told her that I saw one of the interviews she did, where she listed all of her favorite shrimp dishes. I also mentioned that my friend took a picture of Ishikawa-san. Apparently Wasamin didn’t know about this and immediately started laughing. And when I told her I have the picture on my phone. Ishikawa-san got very embarrassed.

During the break, and while in queue, I was showing the Japanese fans some of the pictures you guys took They were all very amused at the photos my friend took of Kimura-san and Watanabe-san. I was also relating some of the stories and the feedback I had heard from you guys (and others too) Needless to say, everyone was very happy to hear all of the positive feedback. Oh, and Kimura-san brought everyone Ghirardelli Chocolate. And of course they all asked me how to pronounce it. 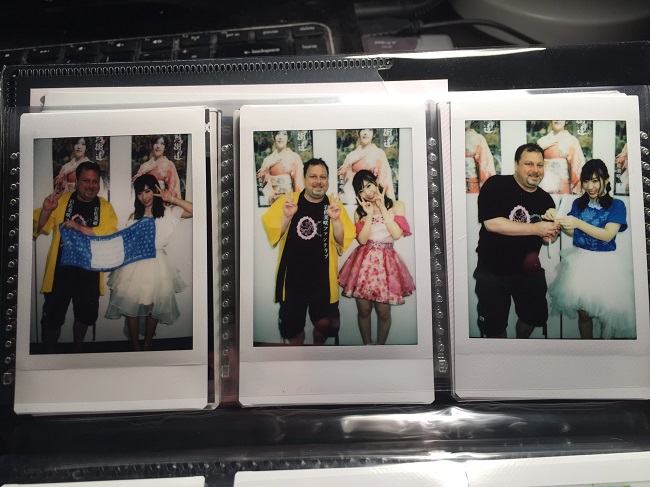 Slot 2: She was wearing my favorite costume of the three. The first thing I did was show Wasamin, and the rest of the staff my friend’s ‘s Ishikawa-san pic. The whole room was laughing. I also told her that everyone I spoke to loved her appearance, and wanted me to make sure I told her “Thank you for coming to San Francisco” She was really excited to hear that. Oh, and every time I brought up any one of your names she knew exactly who I was talking about. She was also happy to hear that I would be bringing my buddy Wil (from Nihongogo) to her appearance in Odawara next month.

Slot 3: Instead of looping, I used both of my pics at once since I had dinner plans, and I wanted to hurry home first to shower and change into different clothes. In any case, this time I wanted to ask her about the fan letter I gave her last month. I had missed the opportunity to get her feedback last month when I wasn’t feeling well and missed her appearance in Hamamatsucho. Anyway, I asked her if the Kanji was okay. She complimented me, saying that my Japanese is getting better and better. I told her that I want to write more letters, but they are difficult for me to write. However, I am still studying Japanese, so I will improve more. But she said she liked the letter, and to keep working hard.

And that was it for the day. On Monday afternoon she is appearing at a Niku Festival in Tokyo. I met with Rageballie (from 48-Talk) in Akihabara last night, and he mentioned he might be interested in checking it our. So hopefully I will soon have another Wasa-convert.