When this concert was announced back in late Spring/Early Summer, we weren’t sure if it another leg of Wasamin’s “Third Concert,” a “Fourth Concert,” or something else entirely.  They didn’t give it any sort of title like that, nor did they call it an “Acoustic Live.”  What we did know was that we had another solo concert on the schedule, which is a treat for any Wasamin fan. 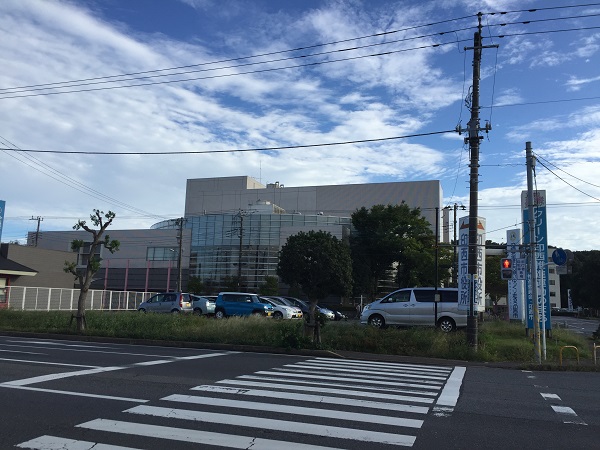 If you count the “Love Live,” this is Wasamin’s sixth solo concert in 2017.  And we have two more “Love Live” shows coming up in a couple of months, which will make eight, and I’m not even counting all of the other major performances she has participated in.  This show would be taking place in Chiba Prefecture, which is where Wasamin grew up.  Specifically, it was in Inzai City, which is a bit of a trek from Tokyo, fairly close to Narita Airport.  Although it isn’t too far from Wasamin’s hometown.  For those of us in the fan club, we had the opportunity to apply early, which hopefully meant we would be getting good seats.

A couple of weeks before the show our tickets arrived via Yamato Transport.  I got 6th Row Left, one seat off of the aisle.  In the days leading up to the show, it was announced that they would have some of the same goods from Wasamin’s July concert, plus a couple of new items.  A ticket holder, and a cap.

I really like the cap.  The ticket holder itself is kinda generic, but the strap, which Wasamin designed, is really cute.  Anyway, the day of the show finally came, it was time to make the trip out to Inzai.  It was about 50 minutes from Tokyo’s Nippori Station via the Joban Line, with a transfer to the Narita Line.  I ran into a few other Wasafans on the train, and we walked together to the venue, which was about a kilometer away.  We arrived around 40 minutes before doors opened, and hung around until it was time to buy goods.  They also announced that there would be a post-show handshake event, and if you pre-ordered her 3rd concert DVD, yo would get multiple handshake tickets, and a cute little bag, with a Wasamin design on it.  I decided that I would forego the bag, and save my money for the time being, instead opting for one handshake ticket via a CD purchase.

Anyhow, I made it to my seat a few minutes before the show.  It wasn’t a bad spot, and it turned out nobody showed up for the aisle seat next to me, so I have a bit of maneuverability when it came to the photo-op portion of the show.  I also had Wasamin’s family seated fairly close to me, so that was kind of a bonus.  Anyhow, here is the show setlist… 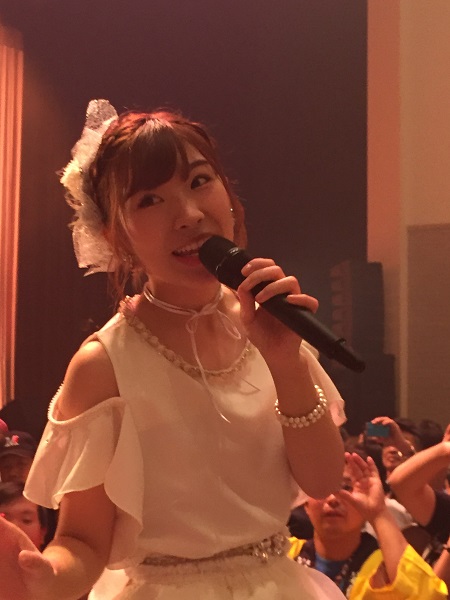 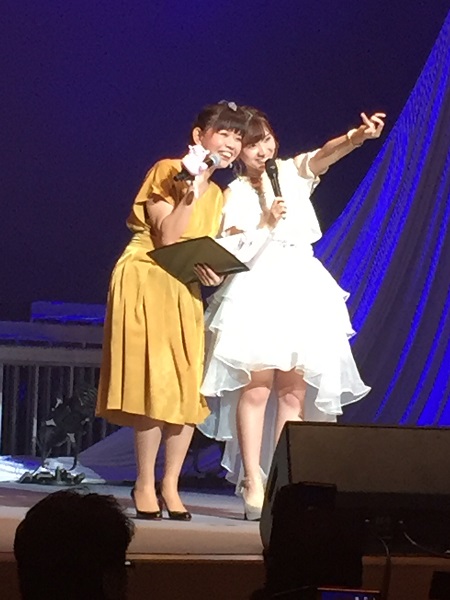 Ultimately this show ended up being a lot like the July concerts, so I guess we will call it an extension of the Third Concert series.  The setlist was similar, and the outfit she wore for the photo-op looked a lot like one of the outfits she wore in July.  However, there were a couple of differences.  Mainly the inclusion of Ikeda Megumi from TBS radio as the MC, and the guest appearance of Inzai-kun, the local city mascot.  We didn’t get a chance to take a photo of Inzai-kun himself, but luckily Wasamin posted one (below).  Megumi-chan was mainly there to cover for Wasamin while she did costume changes, but it was a lot of fun to see her.  If you ever listen to old episodes of Wasamin’s radio show, Megumi-chan is the MC that comes on at the end. 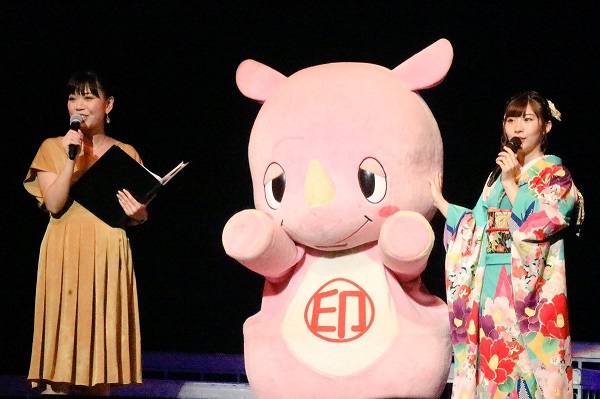 Wasamin was in a bit of a feisty mood, verbally sparring with the fans a couple of times.  When she was introducing the ‘AKB Enka Version Cover’ portion of the show, one fan up front sorta scoffed at the mention of AKB, and she snapped back “Mehh Janai!  During one particular MC she was talking about being from Chiba, and one fan yelled out “Where in Chiba are your from?”  She was like “Ummm, good question, where am I from?  Uhhh, let’s move on…”  Later on when she announced the last song of the main set, as a tradition we all scream out “EEEEHHHHHHHHHHH?” but this time she mimicked us.  LOL.  Finally, during Ringo no Uta and the ‘photo-op, roaming the audience’ part of the show, she took time to remark, mid-song mind you, that perhaps it wasn’t the best idea to pick “clapping songs” while everyone is snapping photos, LOL.  She mentioned it again during Ginza Kan Kan Musume, which by the way is turning onto one of my favorite songs that she performs. 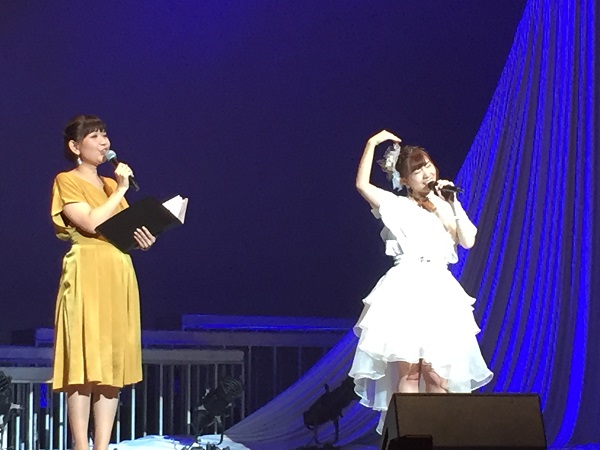 The show attendance was a little bit disappointing.  Inzai Bunka Hall seats around 500 people, and it was about 2/3 full.  So it was a bit disconcerting to see the last 8 rows pretty much completely empty.  Inzai is a bit far from Tokyo, so perhaps some people were discouraged by the long distance.  Her next big concert in February is in a much bigger venue, so let’s hope she picks up some momentum and can fill the place.  Anyhow, here are a few more shots I took of Wasamin at the show. 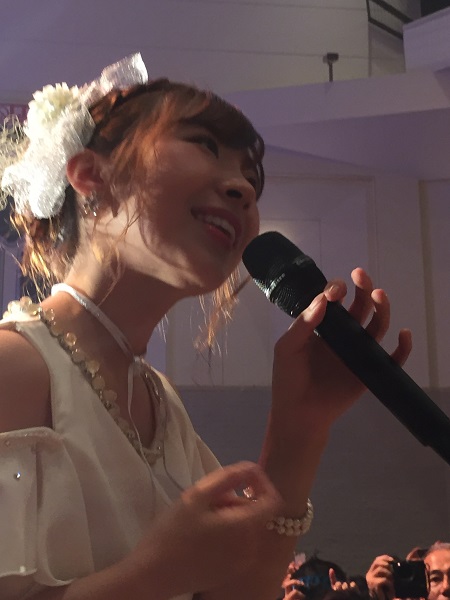 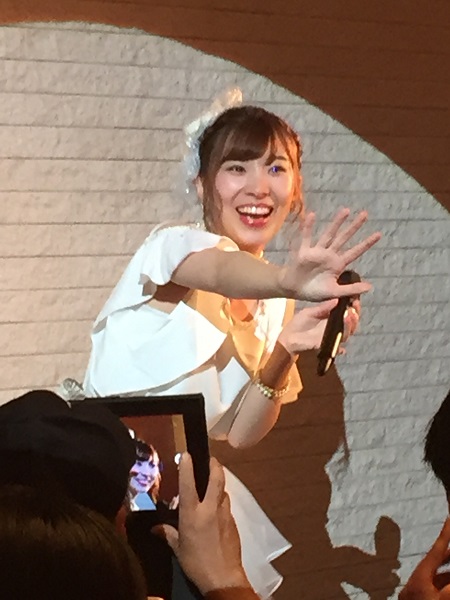 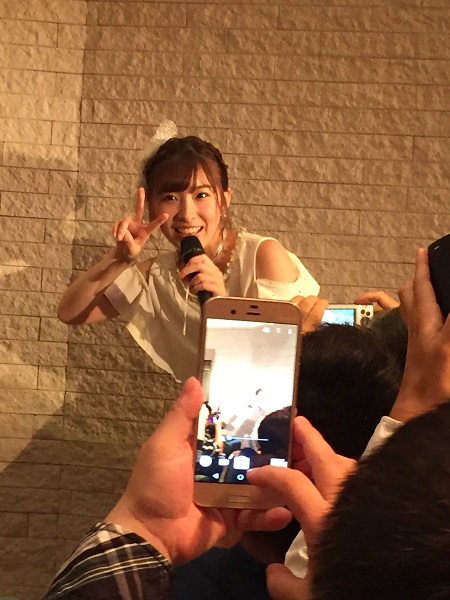 After the show ended I took my time before lining up for the handshake.  I knew a lot of people got tickets, and the line would be long.  Eventually I queued up, wearing my cap, ticket holder, and of course my Wasamin Happi.  When it was finally my turn, I thanked her and told her that I had a lot of fun.  She said “Really?  I am so glad to hear that!  And you have the cap and holder!”  I responded “Yes, aren’t I Ikemen???”  Of course that got a laugh out of Wasamin and Ichikawa-san, who both emphatically exclaimed that I did indeed look Kakkoii with all of my Wasagear on.  Before I was pushed out I told her that my friend Kenji had gotten some great pictures of her, and she should check them out.  Which according to Kenji, she later did. 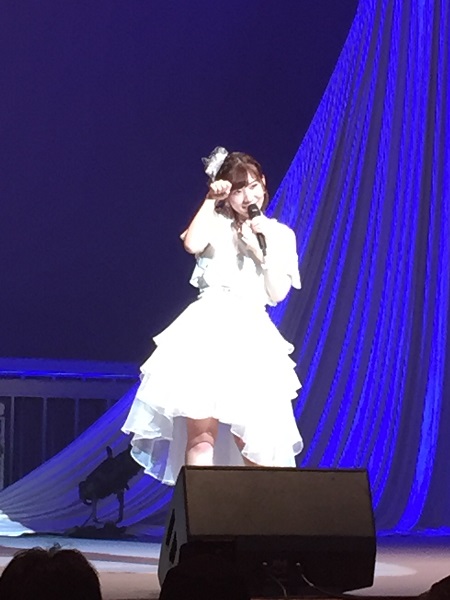 And that was the show, Kenji and I made it back to Kioroshi Station in time for the 8:20 train, and celebrated with dinner at Torikizoku, which is a cool Yakitori Izakaya Chain.

Oh, and let’s not forget the flowers sent by the Fan Club… 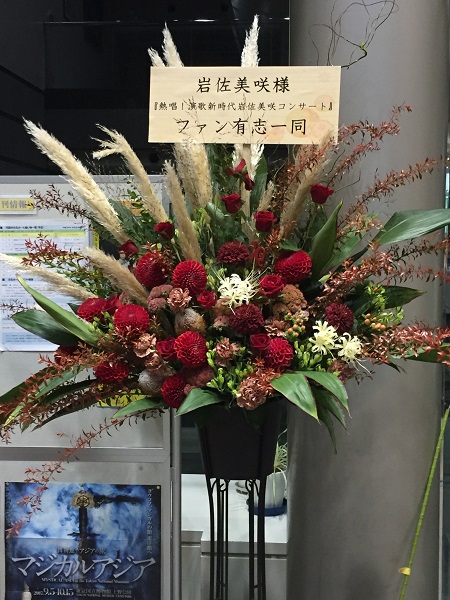 A few Wasamin events coming up…

Next month she has a couple of mini-live events scheduled.  She is doing another dinner show in late October, this time in Tokyo.  Her Autumn ‘Love Live’ in November will actually be two performances, and she will again be part of the Yamano Music Enka Festival this Fall.  My application is in.  I hope I win.