Okay, it is time for a much needed Wasa-update. Wasamin is busy promoting her upcoming DVD/Bluray release of her 3rd Concert at Yomiuri Otemachi Hall this past July. By the way, the tracklist has been published, and the DVD will show the third performance, with highlights from the other two performances as bonus material. 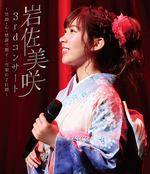 small image of the dvd box

Last week she appeared in Saitama Prefecture at Ito-Yokado Nishikicho, and yesterday she was at Odawara Dynacity in outer Kanagawa Prefecture.. Both memorable locations in Wasa-history…

I mentioned these are memorable locations in Wasamin history, both for similar reasons. Ito-Yokado Nishikicho was the location of the final day of her first album (Request Covers) promotional tour. It was hosted by Jumbo Kobayashi, who was such a funny MC. He loved poking fun at the fans, but at the end of the day he enjoyed hanging out and talking with us. Anyway, since this is a DVD release event, that means reserving a copy gets you a shamekai. They are also offering handshake tickets for buying the new version of Saba Kaido as well. 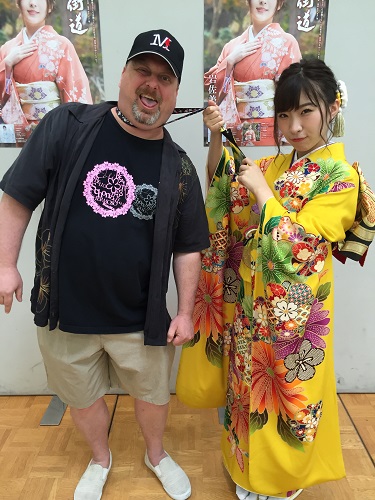 I decided to go with a goofy pose for a change, and Wasamin LOVED it! She was laughing so hard at this photo when I showed it to her later. (And then she dropped my phone

) By the way, the other great thing about Wasamin doing mall events is that I can get a lot of shopping done between shows, as well as get a haircut.

Wasamin has performed at Dynacity a few times. However, the last time she appeared here was for the Gomen ne, Tokyo tour final. She did three performances that day, and the Wasafans bought out every single copy of CD from the local Shinseido, which was promoting the event. This ultimately caused the event to go past the closing of the mall, which did not make mall security happy, AT ALL! 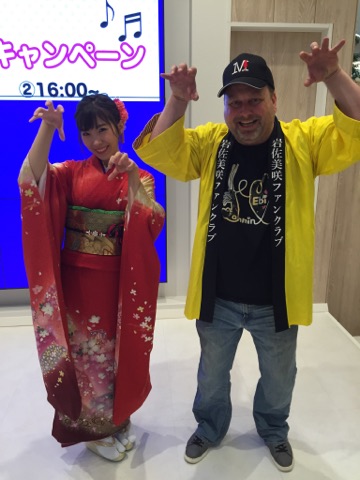 Wasamin and I pretending to be dinosaurs, in honor of Dynacity. Actually, I think the name of the mall is more a play on the term “Dynasty,” which I explained to Wasamin. Unfortunately, I really couldn’t explain to her what Dynasty means in Japanese. TBH, I have a hard time explaining it in English too. Fortunately Kentaro was there, who is bi-lingual, and he said he would explain it to her. Also, I brought a special guest to this event. My buddy Wil wanted to see the performance, since he was fresh off of seeing her at San Francisco. Both Wasamin and her manager were very happy to see that he made the trip.

Misaki has an appearance today near Tokyo Tower, which I am still debating whether or not to attend. I was thinking of skipping it, but I have to miss her pre-order event next weekend, so I’m not sure…