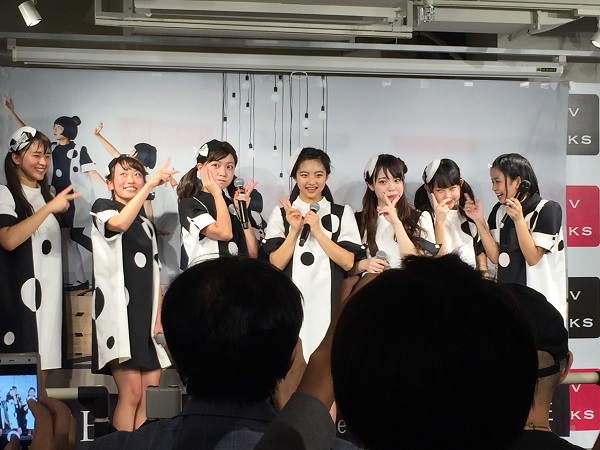 I am beginning to notice a new trend in the idol industry, at least with the groups I follow.   FES☆TIVE just announced on their blog that they will begin promoting an upcoming single next week.  What’s interesting is that they just released a single last week.  Not to mention the single they released this past Summer.  That’s three within a six-month period.  However, they are not the only group in my personal ‘stable’ that is employing this “rapid-fire” single release schedule.  Two weeks ago KissBee began promotion on their new single, this coming about a month after releasing a single, which came right after a single release in the Summer.  In the case of KissBee, this means fans will be enjoying a full schedule of mini-lives leading up to the early December shipping date.  And of course this also means the fans will be repeatedly doing pre-orders for the handshake tickets, and whatnot.

KissBee’s promotion started on the first of October, and according to their website there will be upwards of thirty promotional events over the next 2+ months.  Personally, I have gotten off to a semi-slow start, as tonight I went to just my second event of the promotional period. (They have already done around 10)  This is somewhat by design, as I do try to pace myself with idol events these days.  They are just murder on the wallet.  Not to mention Wasamin just scheduled a slew of new events I need to pay for, and let’s not forget AKB’s 50th single.  So it never ends… 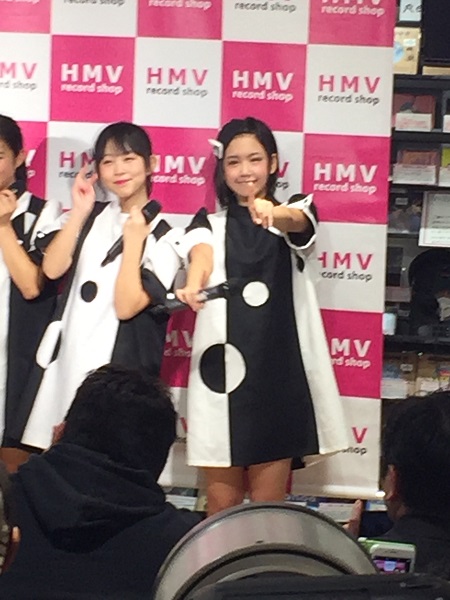 KissBee’s upcoming single is called “& Peach.”  It is a cute song, and has an interesting beat to it.  In fact, so far I really haven’t heard the fans make up any sort of chant to it, as the beat and melody do not lend themselves well to fan participation.  What’s also interesting is that the costumes they are wearing are sort of an amalgamation of the costumes of their last two singles.  The dresses look exactly like a black version of the costumes for “Dokkin Fuwaffuu,” and they are wearing black wigs, ala “Labyrinth”  It’s a cute look, although the dresses look kinda basic. 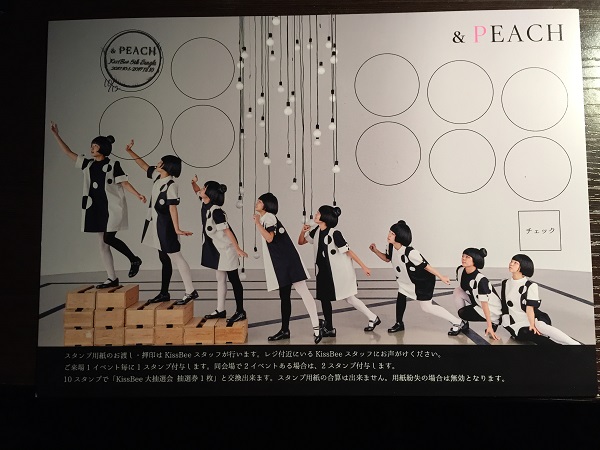 The two events I went to were both at event spaces I am well familiar with.  Last Thursday they appeared at HMV & Books in Shibuya, which is also a known haunt for Wasamin, FES☆TIVE, and Chaki.  Tonight they were at HMV ALTA in Shinjuku, which is a REALLY cool used vinyl record shop right across the street from Shinjuku Station’s East exit, and one of my good friend Frank’s favorite haunts when he is in town.  I had a nice seat at Shibuya, but I got to Alta a little late, and could only watch from the very back.  The bad vantage point was compounded by the fact that it was a narrow space, and they let the ‘photo otaku’ position themselves right in the middle.  This made it very hard to watch from behind them.  It was kind of annoying. 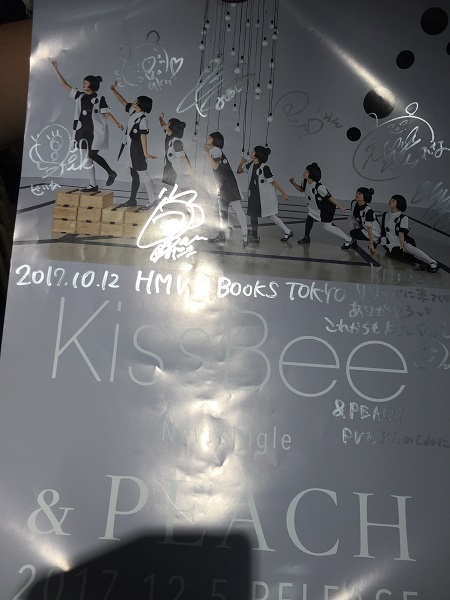 Oh, and in three singles I am still yet to win an autographed poster.  This was won by another Tanifuji fan.

Of course when I go to watch KissBee, I am mainly there to watch my favorite member, Tanifuji Misaki.  I also like visiting with Maeda Reon, who is one of their newer members.  I hadn’t seen either of them in over a month, so I got nice smiles from both of them when they spotted me.  I should also note that Misaki-chan is in a new Fall drama, which had its first episode last weekend.  I watched the first episode, and was really impressed how much screen time Misaki has in the show.  She isn’t the star, just a supporting character.  But the show has a great cast, with Sho Sakurai from Arashi, Seto Koji, who was “Kamen Rider Kiva,” Morikawa Aoi, who has been in tons of dramas lately, including ‘Prison School’, which is one of my guilty pleasures.  If you get a chance, check out the show! 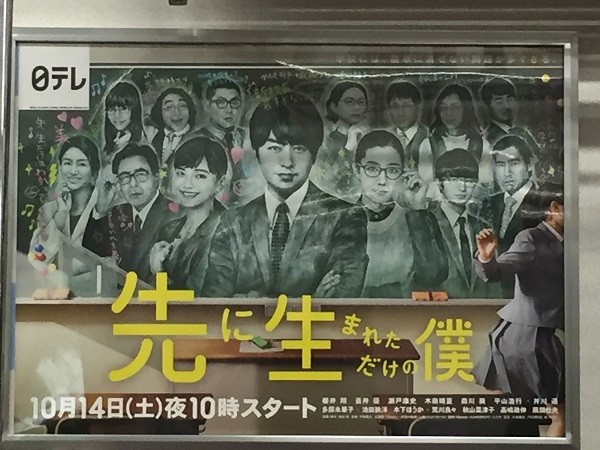 At Shibuya I did my usual 2-shot cheki with Misaki, and a regular handshake with Reon.  However, Reon has been out sick, and wasn’t at ALTA, so I used all of my tickets on Misaki-chan tonight.  Last week I had told Misaki that I was a big fan of Seto Koji, and that I was looking forward to the show.  She was surprised I was a fan of his.  However today I gave her my thoughts about the show.  I mainly told her I was happy that her part seems to be at least somewhat significant.  Here are the chekis… 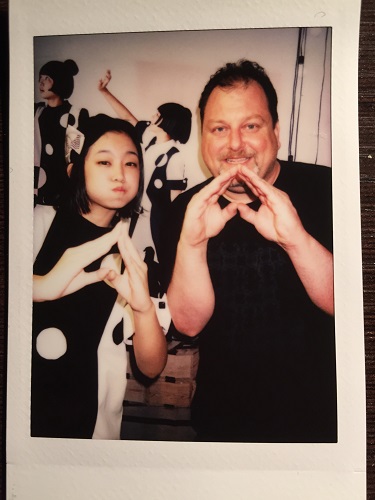 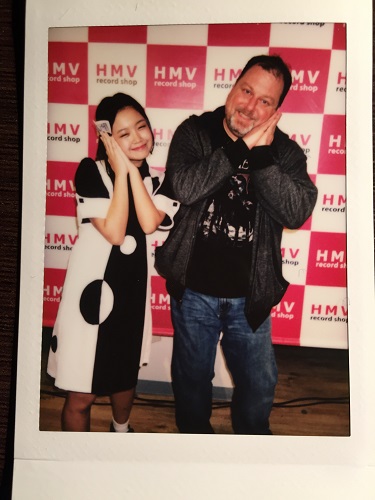 I have only seen Reon once since she was out sick today, but she was fairly genki last Thursday, which is interesting since I think that may have been the last event she attended.  Anyway, Reon is a real sweetheart, and she really goes the extra mile with her fans since she is not nearly as popular as the other members…yet.  Here are the two signed photos I received, once from each of them. 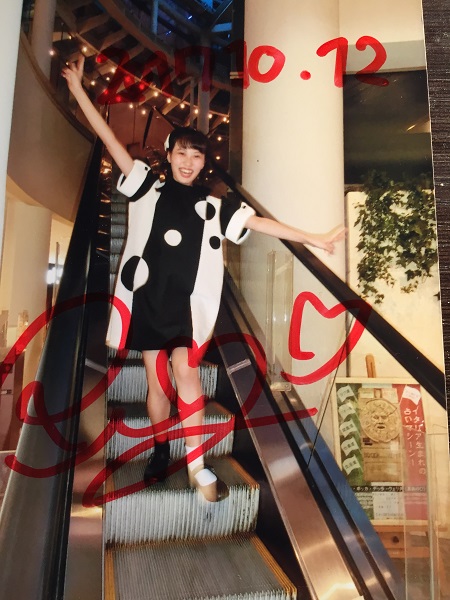 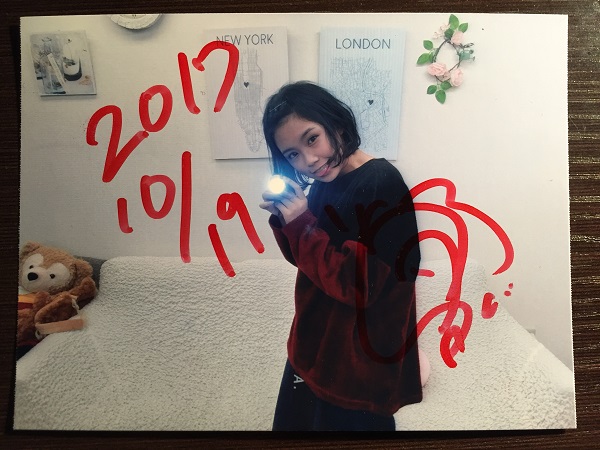 and a Reon ‘live shot’ (with Sakura-chan) 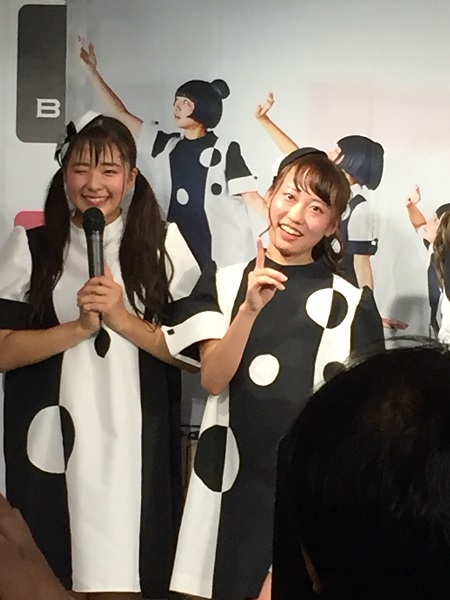 Of the 30+ events on their schedule, I will probably go to around 1/3 of them.  We’ll see.  In the meantime I have pretty much an open weekend coming up, and they have a bunch of appearances scheduled.  However, next week I will be busy with an onslaught of Wasamin events due to her concert DVD release, as well as her solo dinner show.

A couple of months ago I attended Yuki Himeri’s seitensai, which also happened to mark her graduation from the group No Plan.  At the time Himeri had mentioned she had something in the works.  That turned out to be her joining another, fairly well-known idol group called DISDOL.  This was a bit of a surprise since this group’s style is somewhat of a departure from Himeri’s ‘princess’ personality.  But I was happy that she would be staying as an active idol.  A couple of weeks ago I got a message from one of Himeri’s fans asking if I was coming to her DISDOL debut, which would be taking place later that evening at Otsuka Hearts.  I was actually at a Wasamin event at the time, but this club is VERY close to my apartment.  So I decided I would go and support her.

Now before I go into my brief report, I should note that when DISDOL announced their three new members (including Himeri) they also announced that the entire existing group would be graduating.  So it turns out that Himeri is leading the birth of DISDOL Mach-2.  In fact, both original DISDOL and New DISDOL were performing separately at this event.  So I would be getting a good taste of what this group was all about.

DISDOL has more of a hard rock edge to them.  Not that Himeri’s former groups, Alice Juban and No Plan don’t ever do songs like this, they do.  It is just interesting to see Himeri performing in black leather after seeing her almost exclusively performing in white in he previous groups.  (White was her official color in Alice Project)  But she really pulls it off well.  I think part of it has to do with her growing as an idol, and an adult.  After the event I took two chekis with her.

On second thought, she is perfect for this style.  When I first met Himeri 3-4 years ago she was somewhat of a dork.  She has that goofy helium voice, and slight discoordination in her dancing.  It was part of her charm point.  However, as she has gotten older (she is 23 now) Himeri has become quite sexy, and very hawt.  The blondish hair really makes a difference too.  And she is always so much fun to hang out with.

Just another group I need to keep track of.  I believe the original member’s will be officially ‘passing the baton’ to the new DISDOL members this weekend.  So yet another show I must consider seeing…