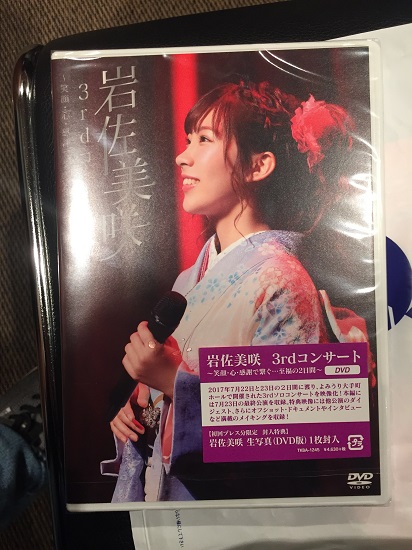 Wasamin was incited for the sixth year in a row to appear at Yamano Music’s Enka Festival. If you have ever been to the Yamano Music Store in Ginza, it is an amazing place. The first couple of floors sell CDs, mainly focusing on theJazz, Enka, and Classical genres. They do have an idol section too. However, once you get past the 2nd floor it is a true music store, with each floor dedicated to different instruments. It’s a really cool place…

So, they invite various enka artists to appear individually at this festival, and each one performs at a designated time at the ‘Jam Spot’, which is the top floor of the store. The tickets to the shows are free, however you must apply by mail, and you must purchase one of the performing artists’ CDs to get the postcards to apply with. You get five postcards per purchase, so technically if you want to you can apply for up to five different performers. For me, however, I put all five of mine in for Wasamin in order to maximize my chances to win. So you can imagine the surprise on my face this time when THREE tickets arrived in the mail. Jeez, I only needed one. 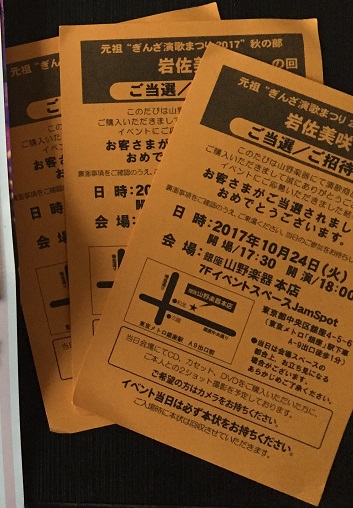 I got to Yamano Music a little early, just in case somebody needed an extra ticket. However, I was not the only one with extras. I eventually went and queued up in the stairwell. Oddly enough, with my three tickets, none of them were a good entry draw. (My lowest was #95) There was hardly anyone this far down the stairs. One of the other fan club members noticed me down there, and came down to hand me a much better ticket. (She had three as well, and they were ALL below #40) So I got to move up three flights. Not that it mattered. First of all, JAM SPOT is a really small room. With #39 I was in the 3rd row, left side. However, after everyone came in there were still seats in the 7th row, and beyond the 10th row there were plenty of seats. The difference between the 3rd and 10th row is less that 20 feet. 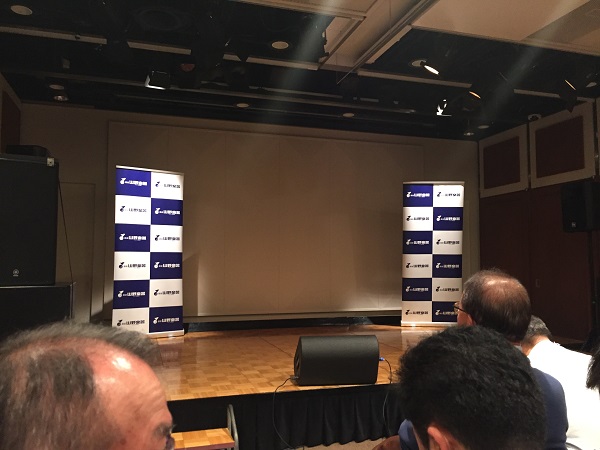 I should also note that this happened to be “Furage Day” for Wasamin’s new concert DVD/BluRay, so we were all getting our hands on it for the first time. And, we would be getting to do shamekai with the purchase as well. Ultimately, Wasamin’s Enka Matsure performance isn’t that much different from her usual mini-lives, except she does a few more songs. BTW, here is the setlist for Enka Matsuri…

Since I currently only have a DVD player in my apartment, and I wanted to watch the concert when I got home, I purchased a DVD. I do have one of each type coming in the mail from pre-order events, and I will be buying more copies later on this week as well. Also, I have been feeling slightly under the weather for the past few days. So when it was my turn to talk to Wasamin a basically said that I planned to watch the concert tonight. (Although I screwed up and originally said I was going to watch it “next,” then I corrected myself. LOL I did go home and watch the concert. I will do a mini-review of the DVD at the bottom of this post… 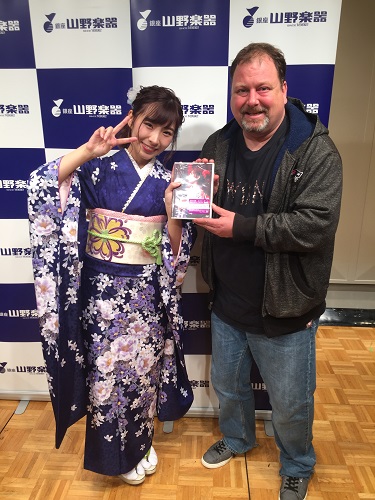 I was debating whether to go to this event in Kanagawa, or tomorrow’s event in Saitama. I wouldn’t mind going to both, but there’s the matter of purchasing an expensive concert DVD every time. Not to mention Wasamin’s Dinner Show is on Friday, and if they go Shamekai for purchasing the DVD there I definitely want to participate. In the last week I bought tickets for both of Wasamin’s concerts in February, her Boat Event in December, AKB’s 50th single, and Kiss Bee’s new single preorders. My wallet has been taking a beating. At the end of the day I decided to go to Kanagawa. 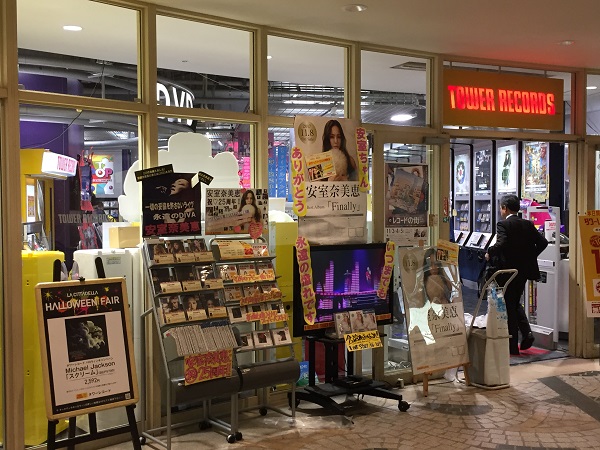 I had never been to this Tower Records before, and got lost trying to find it. It is on a big shopping street very close to JR Kawasaki Station, but the confusing thing is that there is a building with a big Tower Records sign on it, but that isn’t where the store is. It took me a good ten minutes to figure that out as I circled the building looking for an entrance. Finally I figured it must be somewhere else on the street. By the time I found the shop Wasamin had just taken the stage. Here is tonight’s setlist…

This particular Tower Records, as well as the Urawa Store she is performing at tomorrow, doesn’t really have a proper staging area. They basically push a bunch of shelves to the side and make a stage area. However, it is not a very big area, and gets filled up quite quickly. By the time I got there, I could barely get in past the entryway. There was space in the middle, but it was all blocked by people jamming the entries. Eventually I got annoyed with more and more people jamming into this little space, and moved behind the shelves. It was a bit further away, but it was more comfortable. 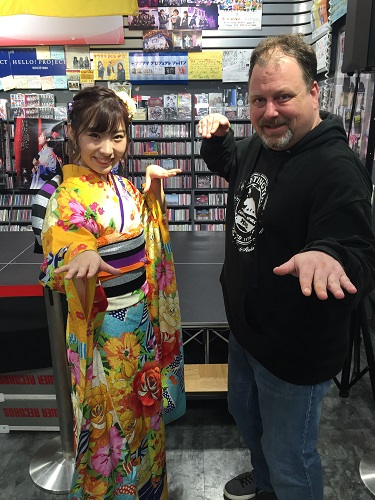 This time I bought a Blu-Ray copy. (My Blu-Ray pre-order from Odawara arrived in the mail too) While I was posing with Wasamin I mentioned that I paid for my Boat Event ticket today. And while I was doing my handshake I told both she and Ishikawa-san that I watched the show, and gave them my thoughts. It was late, and I hadn’t eaten, so I took off to find dinner, but not before I noticed that the mall has a replica of Rome’s famous Bocca della Verita outside the store. (The mall does have an Italian theme) 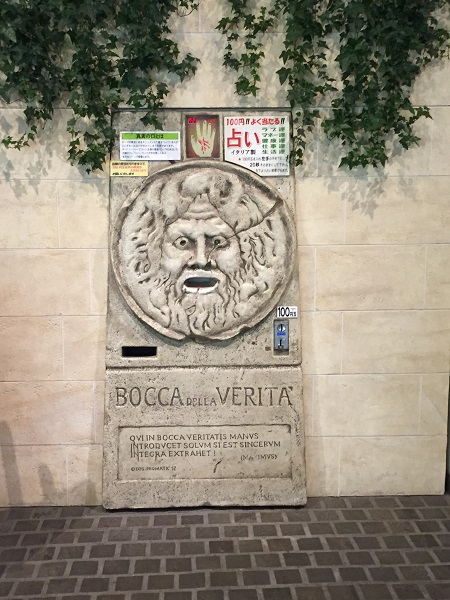 As for the Concert DVD, it is only one of the three concerts she performed that weekend, the last one. However, there is a “digest” of the other two shows on the DVD extras. Why they chose the third one? Not sure, but if you read my original review of the concert back in the Summer, I mentioned that there was an issue with the camera positioning on the first night, and they had to re-position all of the cameras at the last second, even causing the show to start late. So I am guessing that the first show’s filming wasn’t that good. But the good news is that we at least get highlights on all the sings she performed that weekend. As for the filming, much of the concert is ‘extreme closeup’ on Wasamin. Now, if you are like me, and are a fan of Wasamin’s adorable face, that isn’t an issue.  In fact, I was for the third concert I was sitting right next to the cameraman who was filming that shot, and even had a closeup view of his monitors with all of the camera angles.  So that was a fun little bonus for me.  On the flip side, there were a couple of times where the color seem to drain out of the shot, mainly on longer shots from the side. But overall it is a nice concert, and I recommend it for YOUR collection!

There is also a segment where we get to see the preparation that goes into putting these shows on. Wasamin basically performs the concert in a little room in front of a bunch of execs while they decide which songs to perform and when. Additionally, we see backstage footage, and get Wasamin’s thoughts throughout the process.  Much of the backstage documentary-style footage was done with Wasamin’s performance of the song Misaki Meguri as the background soundtrack.  It is such a beautiful song, and adds a bit of nostalgia to the theme.

But the best part, and I had a feeling they were going to do this, is that they have a digest of all the Ichigo Seat festivities. So you get to see a bit of the first night post-show party. You also see the bit of the matinee pre-show events, and of course the special encore at the end of the last show. And yes, I am on the DVD plenty. Both in the concert, and in the extra footage.

Anyway next up is Friday’s Dinner Show. I will be sure and take good pics of each course on the menu. This is a really nice hotel, and I am really looking forward to see what our dinner is going to be.