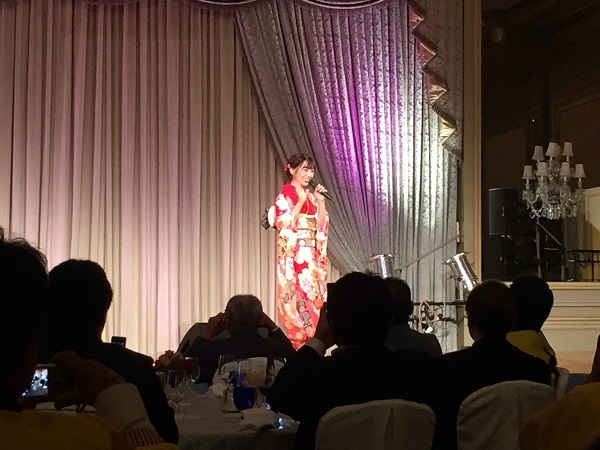 Wasamin has developed quite the repertoire of special events to keep her fans constantly engaged.  Over and above all of the in-store mini-lives she does on a regular basis, her schedule is filled with fan club events, live concerts, and special excursions.  Her dinner shows are quickly proving to be one of the most special events.  Not only do the fans get to see an intimate live performance in a beautiful ballroom, the show also includes a very nice dinner, with dishes handpicked by Wasamin.  Not to mention most of the fans get dressed up for the occasion.

So when Wasamin announced that she would be doing her first “solo” dinner show in Tokyo, we weren’t at all surprised.  However, we were surprised at the choice of location, Hotel Chinzanso Tokyo, which happens to be one of the nicest hotels in Tokyo.  One would figure this would be a fairly high-ticket affair, but at 15,000 yen, it was surprisingly inexpensive.  Anyway, it should be no surprise that I immediately reserved a ticket during Fan Club preorder.  But it should also be noted that this event was open to the public, so you didn’t need to have a fan-club membership to attend the event. 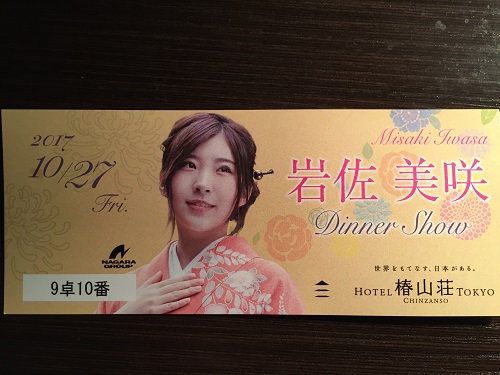 After a Japanese grammar exam in the morning, and watching NFL football while eating pizza for lunch at Rocco’s in Oji, (awesome pizza btw, and they show NFL, MLB, and NBA games) I headed home to rest and get ready for the evening.  I had originally misread the show info, and thought doors opened at 7pm, but luckily I realized it was slightly earlier, so I headed out early since the hotel isn’t very close to public transportation, and I wanted to account for the possibility of getting lost.  However, large hotels are normally not too hard to find, and after taking a nice walk in a beautiful neighborhood along the Kanda River, I found the back entrance to the hotel. 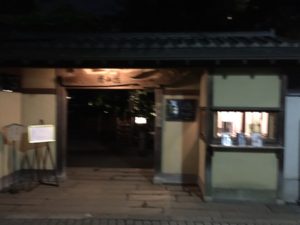 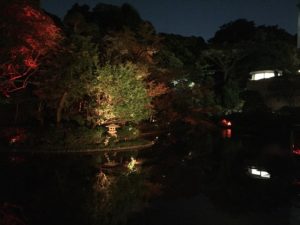 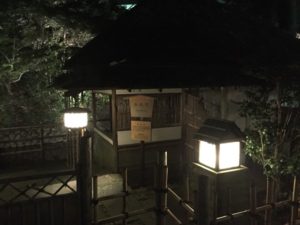 And what a gorgeous hotel it is!  The rear entrance isn’t even on a street, it is on a walking path in a park-like setting.  Once stepping through the rustic gate, there is an amazing onsen, surrounded by traditional Japanese structures, pagodas, and beautiful little lakes and streams.  Restaurants are tucked away into secluded and serene locations.  I was there at night, but I could tell that it is probably even more gorgeous during the day.  Eventually I wound my way through the paths, and up to the hotel’s 1st floor, which was where the ballroom was located.  However, most people were waiting on the main (3rd) floor of the hotel, so I hung out there while waiting for doors to open.

At 6:30 the doors opened, and we had 30 minutes of cocktails before dinner.  It was an open bar of beer, wine, whiskey, and non-alcoholic drinks.  Of course there was also a booth outside selling Wasamin’s CDs and DVDs.  It was then we found out that they would also be doing 2-shots if you bought a copy of her 3rd concert.  Awesome!  So many of us have been waiting for a chance to a do a 2-shot with her at one of these dinner shows.  So I immediately picked up another Blu-Ray before heading inside to my table.  In the meantime, the fan club had sent a Halloween themed flower stand for the event… 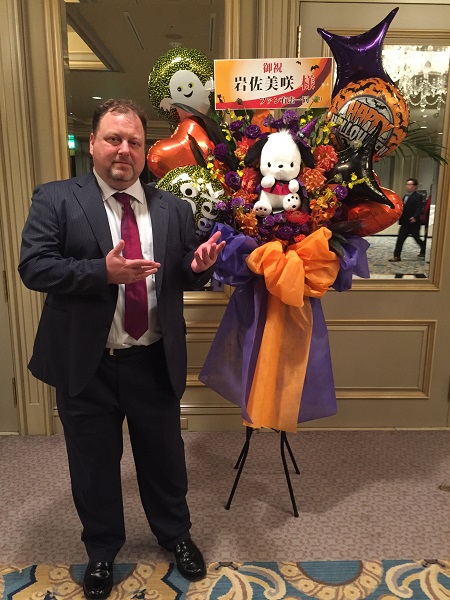 I was at table #9, which was pretty much dead center in the middle of the room.  The fan club was spread out pretty much all around the room.  Eventually dinner made its way into the room.  It was four courses, in addition to unlimited bread.  (They had onion bread!)  Here is what we had to eat… 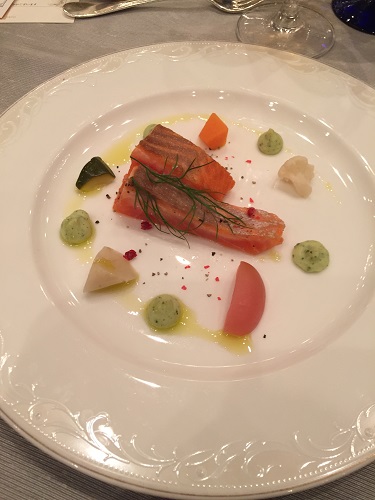 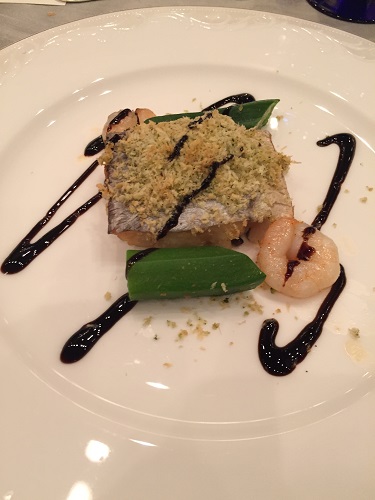 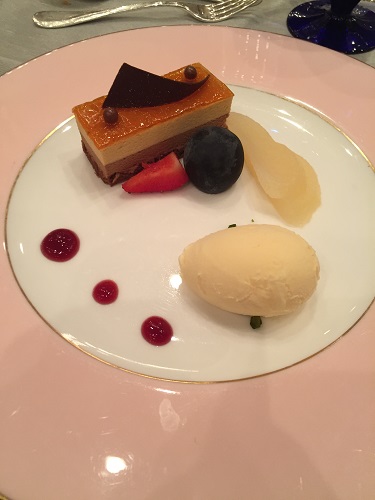 After dessert and coffee, the show was getting ready to start.  Actually, the show was supposed to begin at 8pm, but the dinner ran very late.  It was almost 8:45 when the show finally started.  But first Wasamin did a kage-ana where she was asking us how dinner was.  Also, it was announced the previous day that like at her concerts, there would be a camera-shooting portion of the show.  Here is the setlist…

7. Saba Kaido
8. Nora
MC: Wasamin leaves stage, recording plays of her asking us how we are enjoying the event.  (Unfortunately, she didn’t always leave enough time after her questions for our responses, LOL)  Wasamin changes costume, her guitar is setup on stage.
9. Misaki Meguri
10. Ito
MC:  Final songs, “Ehhhhhhh????”
11. Wakare no Yokan
12. Gomen, ne Tokyo
(Main show end)
Encore:  Another feature of the event, it was announced that there would be a drawing at the show where Wasamin would sign any memorabilia you wanted.  Ultimately they drew three people, two at table#8 and one at table #2.  One person got his Happi Coat signed, the second got his Wasamin phone case signed, and the last person had her sign his copy of Saba Kaido.
13. Moshimo Watashi ga Sora ni Sundeitara 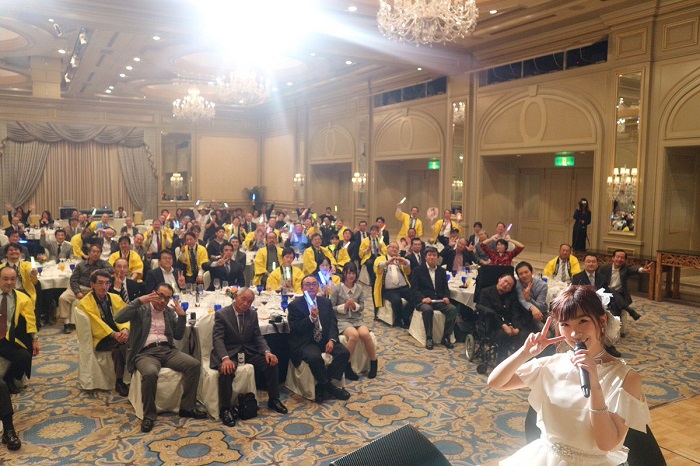 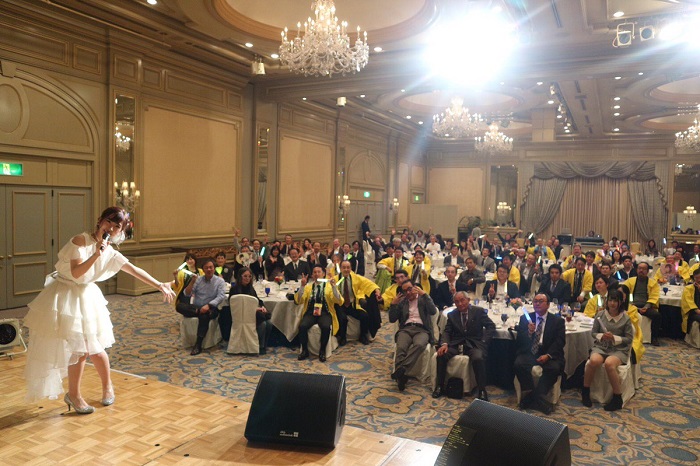 You can see me in both pics, although I am easier to find in the top photo

Wasamin always gets a kick out her fans when they get a bit of booze in them, as she makes comments about how genki we are at night.  She also thanked everyone for coming out on a Friday night after a long week of work, noting that this was “Premium Friday” which got a jeering laugh from the crowd.  One interesting moment, Wasamin briefly lost her voice in the middle of Saba Kaido.  She went to sing a line, and it came out all wrong.  She had to quickly clear her throat, but she finished the song just fine.  She quickly grabbed a couple sips of water before starting to sing Nora.

The audience shooting was a lot of fun.  There were 14 tables, so she had plenty of time to do complete circles around every single one, stopping for lots of closeups.  I got a lot of nice shots, including some where she was literally inches away from me.  At one point during Momen no Handkerchief she noticed that one of the fans had left his lens cap on his camera.  She actually stopped, pulled it off, and started making fun of him in mid-song.  It was too funny!

Here is a collection of shots I took during the show… 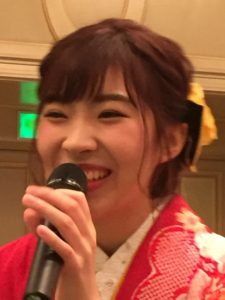 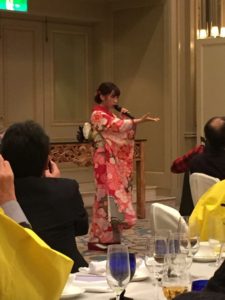 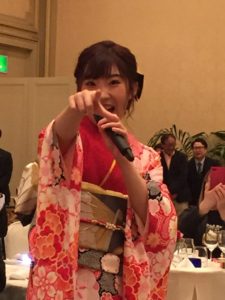 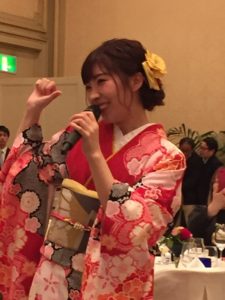 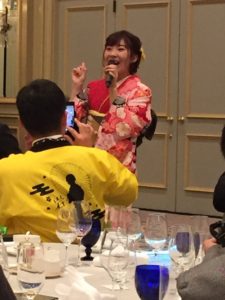 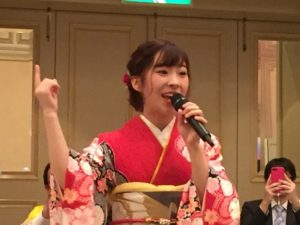 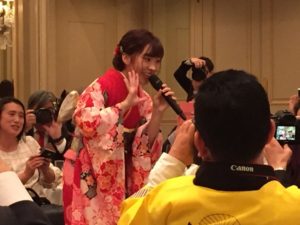 We were all hoping we would win the lucky drawing to get stuff signed, so it was kind of a bummer she only chose three people.  I keep hoping that one day I will get the opportunity to get my Happi Coat signed.  Anyway, the show ended, and we all dispersed into the reception area to line up for 2-shots and handshakes.  However, the event had run extremely late, and Wasamin needed to get to Osaka the next morning since she has events all weekend in Western Japan.  So they asked us to present all of our tickets at once instead of looping the line.  I actually waiting a little while before lining up, since the line was actually extremely big.  My turn eventually came… 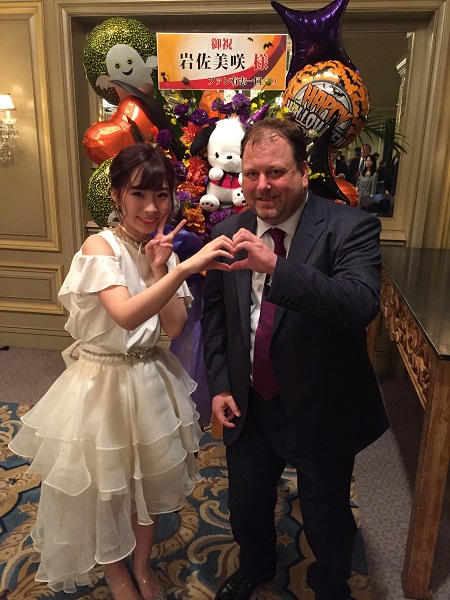 I basically told her that the show and dinner were wonderful, and I love when she performs Misaki Meguri, since it is such a beautiful song.  In fact, I would go as far as saying that her version is even more beautiful than the original.  By the way, they feature her performance of Misaki Meguri over the Documentary feature on her new concert DVD, so be sure and check it out!

At around 10:15pm we had all exhausted our tickets, and Wasamin gave us all a farewell before she left.  In the meantime Wasamin’s management asked us to all take a group shot.  Actually, we took around 8 group shots for various people’s cameras.  Oh, and before we left Ichikawa-san asked us to mention the hotel when we tweet pictures and reports from the event.  And with that, the event was over.  My friend Phil and I left through the rear entrance, which was actually closed.  But one of the attendants in a Yukata actually let us out through an exit in the onsen, which was really nice since we didn’t want to walk all the way back to the hotel.  I was able to make the second to last train on the Toden Arakawa Line, which made my journey home a lot shorter than trying to take the Metro or JR. 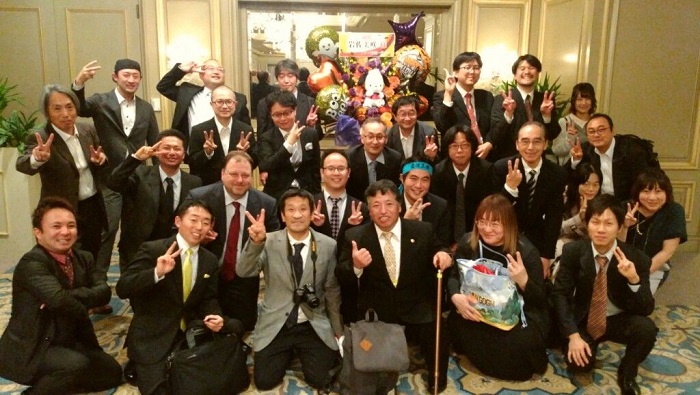 Once again, the “Rat Pack”

I can’t stress enough how wonderful this event was.  Just everything about it was perfect.  Wasamin looked beautiful, the venue and food were beautiful.  It was a really special event.  And the good news is that Wasamin’s manager blogged later that the event was a big success, and they think the next time she does a dinner show they might choose this hotel again, since it was so amazing.  Speaking of amazing, we have two special events coming up in the next six weeks.  First, Wasamin’s Love-Live acoustic show will be taking place in late-November.  According to the website, both shows are already sold out.  Then in early December there is a fan-club exclusive boat excursion which looks like a lot of fun!  According to Wasamin, that event is almost sold out too.  So lots of fun for Wasafans heading into the holiday season!