Back to Yokohama for the second half of the 48-groups big handshake weekend. This time I had a few more tickets than on Saturday, and I had a variety of different prizes I could potentially win. 1-shot videos, 2-shot selfies, autographed member recipe cards, and the autographed alternate CD jacket. The question was whether or not I would be lucky and win at least one of each prize. I also took pictures of a bunch of the member recipe cards. Let’s get right into the action…

Tani Marika (Lane 53) I only had the one Slot 2 ticket, so I didn’t really need to get to the venue until after 11am. Tani didn’t have too big of a queue. I checked in, drew on the lottery, and won. Good start! It was a choice of 1-shot video, or 2-shot selfie. Since I suck at taking selfies, and Tani, is so funny, I chose the video…

Looks like I got a girlfriend, eh??? Yatta! In that case, I better grab some Tani gear ASAP! I asked Tani if she was still a Soft Bank Hawks fan, and she replied affirmatively by exclaiming yes and pumping her fist. So I gave her a quick “omedetou” before getting pushed out. In the meantime, I ran into Matto, as well as Naruse . I also ran into a Hong Kong fan who I believe I met once before, but I don’t remember his name. Oh, and I signed a birthday card for Marika (as well as Bibian) and her fans gave me some Tani tissues! 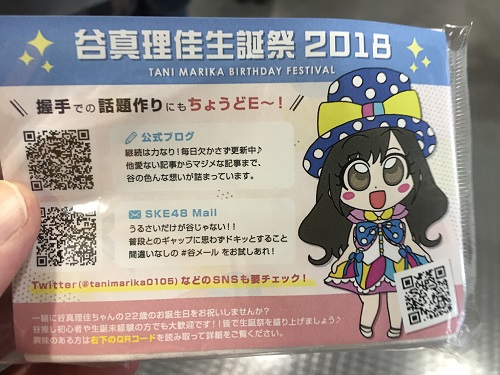 Yamane Suzuha (Lane 55) I decided to queue up early of Zunchan’s lane since it has a tendency to get very long. I lined up around 20 minutes early, just as Aramaki Misaki was finishing up with her last fan. I didn’t win the selfie/video prize, which wasn’t too big of a surprise since she is a bit harder to win for. Anyway, a short time later Zunchan entered her booth. What the hell, she is 20 minutes early? She wasn’t there to start meeting the members, she was there to decorate her booth. Balloons, streamers, toys, stuffed animals. It is amazing watching her do all of this. And it takes her over 10-15 minutes to get it all done. In the meantime, everyone from the neighboring queues are also watching and laughing in amazement. Even Shoji Nagisa came in to see what she had done to her booth. That isn’t even all. She then has a bunch of handwritten signs that she asks the staff to strategically place all over the lane. It is absolutely amazing what she does, and you can see it all from halfway across the hall! 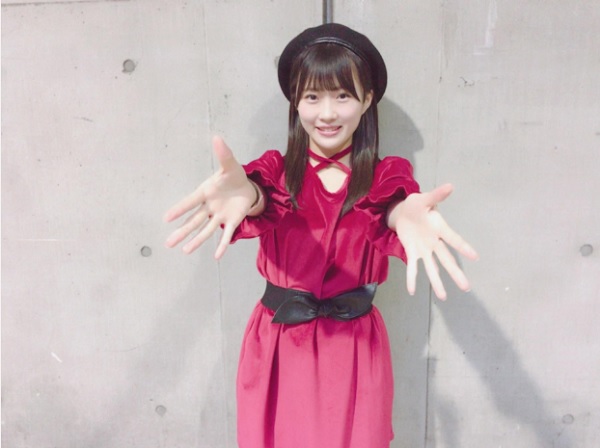 Needless to say when it came to my turn I told her I watched her put her booth together, and that it was amazing and totally cute. I then said that her bedroom at home is probably the same. LOL.  She basically laughed along with me. Later on I took my friend Nori over to see it, and he thought it was great. He said he had never seen anything like it before. I have seen members decorate their lanes before, but never to this level.

Akiyoshi Yuka (Lane 62) After Yuka-chan stole my heart on Saturday, I was really looking forward to seeing her again on Sunday. Luckily, I won the 2-shot selfie. But was this really good news? I suck at taking selfies. So while I was waiting in the queue (she did have a bit of a line) I practiced taking selfies so I wouldn’t blow it. I got her in perfect position, I had a good grip on my phone, I extended my arm out as far as I could, cracked a half-smile, and… 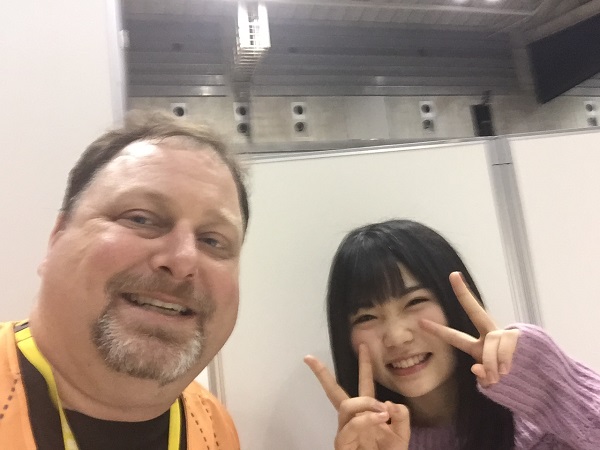 Success! I finally took a proper selfie. In my quick visit I noted that the sweater she was wearing was just as cute as yesterday, and that she always wears very nice clothes. She quickly thanked me as I got pushed out. But I would be seeing her again to lead off the next slot…

Akiyoshi Yuka (Lane 62) This time, surprisingly, I did not win for the 1-shot video. I wasn’t to disappointed though, since I already have three of those with her from recent events. I instead decided to congratulate her on the Hawks win. I noted that I was looking at her twiiter last night, and saw all of her Japan Series tweets, and that I saw she ate dinner with Meru. Anyhow, I hoped I would have better luck when I visited Yuka again in Slot 6.

Fuchigami Mai (Lane 73) Keeping with the theme, I had already set up with Maichan that I would be rooting along with her for the Hawks on Saturday night. I didn’t win the alternative jacket prize, meanwhile Maichan had a decent sized queue. However, I guess nomany people were winning since her line went very fast. In any case, when it was my turn she already knew what we were going to talk about, and started pumping her fist and cheering before I even got into the booth. I congratulated her, and she gave me a big High-Five. Maichan is so much fun. 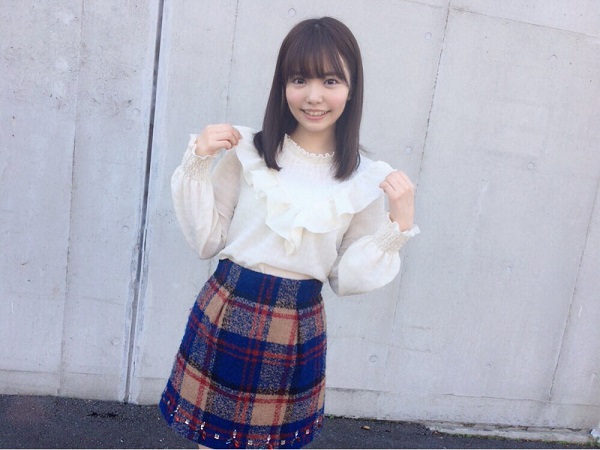 I had no Slot 5 tickets. So after visiting with my friend Nori for a little while, I bailed back to Queen’s Square for a late lunch and a cocktail.

Sakaki Miyu [Cuca] (Lane 32) I had three tickets for Slot 6, and decided to get Cuca done first since she never has a line. However, when I got there, she DID have a small queue. So I decided to wait for it to clear out, but it didn’t. More people kept entering her lane. This is really good news. She is starting to cultivate more fans! Her lane was still “automatic win” for the prize, so I would be getting the autographed recipe. 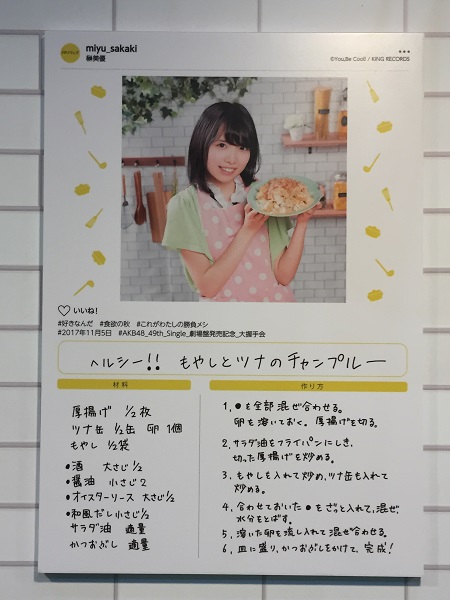 So I decided to ask her about the recipe. I neglected to tell her that I do not like dishes with cooked tuna in them like that. Instead I asked her if it was an Okinawan recipe since a friend of mine thought it might be. She insisted that it wasn’t. She also sincerely thanked me for coming, and asked if I lived in Japan. Since this is like the 4th or 5th time I have met her, I think she is getting that I really do like her.

Akiyoshi Yuka (Lane 62) One final visit with Yukachan, and I won her recipe card too! It seemed like most people were winning, since in my immediate vicinity everyone had won, save for one unlucky guy. 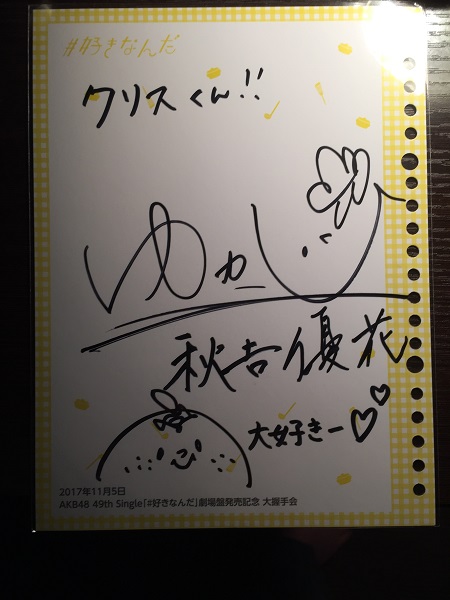 Her recipe was for a fried rice dish, so I asked her if it was Chinese inspired. She told me that it is actually her father’s recipe, something he makes at home. The guards were calling time, but Yukachan spent extra time on the autograph, even drawing a mikan at the bottom, as well as a special message. So a total score. I look forward to seeing her again at the HKT event in late-November.

Murakawa Bibian (Lane 58) Bibian had quite the queue, I was really surprised. It didn’t really matter, since it would be a while until I could use my final ticket. I didn’t win the 1-shot video, oh well. Bibian was completely decked out in Adidas gear, so I noted that when I entered the lane. And like with the other HKT members, I asked her if she was a Hawks fan. And then congratulated her on the Japan Series win. Short and sweet. 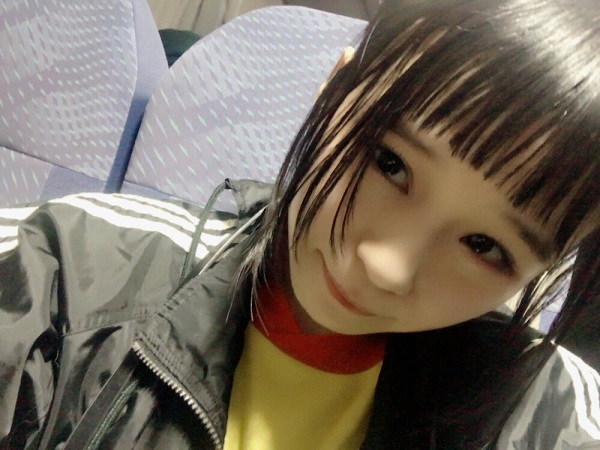 So we would have to wait until after the dinner break before Slot 7 started. This is why I usually try to be done after Slot 6. However, oftentimes some of my favorite members, like Tani, Kaotan, Bibian, and even Yukachan only have after dinner slots. In this case one member I like was only Slot 7-8, and since I didn’t even see her at all on Saturday, I would brave the wait.

Matsumura Kaori (Lane 41) I couldn’t decide whether I wanted to enter Kaotan’s lane early, or wait a while. But her queue kept getting bigger, so I decided to get in there before it got out of hand. In any case, she likes to take her time with the fans. I didn’t win the “alternative CD jacket” prize, but you never know with Kaotan. In the meantime her lane was positioned right next to the Handicapped lane for SKE. So I had a really closeup view of all the members coming over to that lane. It is really interesting how that lane operates too. The first member who came over was Ego-chan, then Ryoha, Hidaka Yuzuki, Suuchan, Obamina, Kaotan, and finally Masanya when I was really close to the front. Masanya spotted me and waved hello too. It’s funny, every time I think I am seeing Masanya for the last time, I end up running into her again. Is it fate? Anyway…

I also noticed that Kaotan seemed to be signing jackets for everyone, regardless of whether or not they won. Cool! Except, when I was five away they switched guard staff, and the one new guard asked why she was signing jackets for people who lost. The exiting guard basically shrugged. So it would be interesting what would happen when it was my turn, since the three people in front of me all won. So it was finally my turn, as expected Kaotan reached for a jacket to sign, but the guard interjected and said “No, he didn’t win!” She was like “Oh, he didn’t? I’m sorry.” I just played dumb the entire time, although I was slightly bummed that I got cock-blocked by the new guard. In any case, I told her I was just happy to see her. I then asked her about her Banana Juice recipe, and if it was better than the Butterbeer she had at USJ a few days ago. She then asked if I was coming back for Slot 8, and maybe I would win the recipe card. But I told her the next time I would see her was at the SKE event at the end of the month. After saying our goodbyes, I was done for the evening.

I ultimately went 4 for 9, which isn’t a bad percentage. I would have liked to have won at least one of those alternate jackets, and I would LOVE to get a selfie or a video of Zunchan. But oh well, maybe next time.

Here are the recipe cards I took photos of on the wall at the far end of the hall. I mainly took pictures of members that I like, with a few others thrown in for friends. And of course, Tani’s infamous recipe for Cup Ramen… 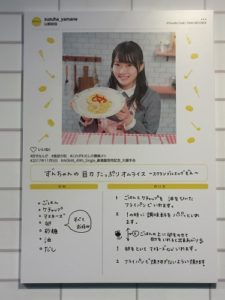 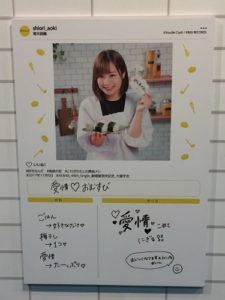 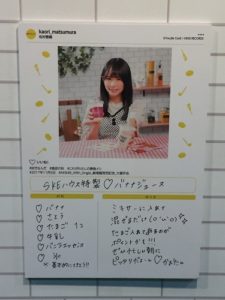 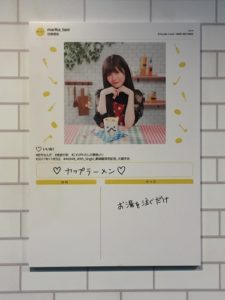 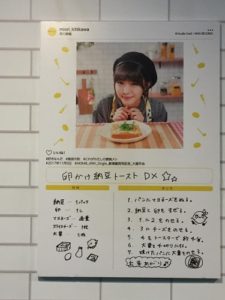 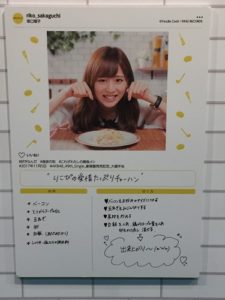 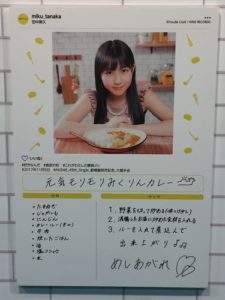 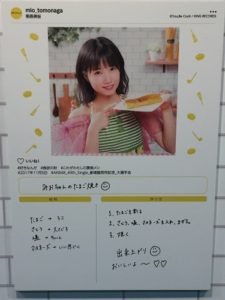 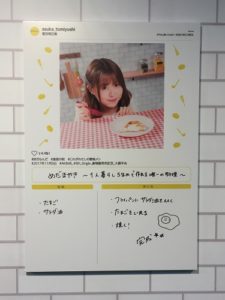 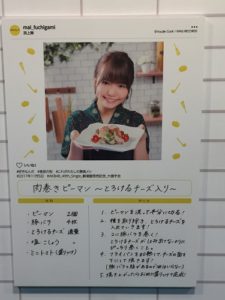 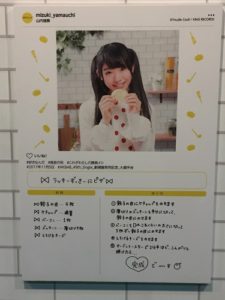 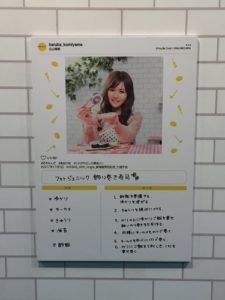 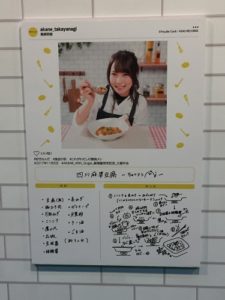 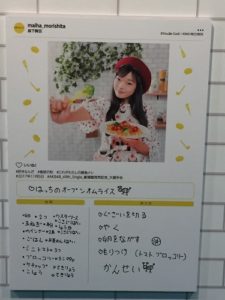 So rounding out the year, I have the SKE and HKT handshake events on November 23rd, and that is basically it for me and the 48-groups until 2018 since I will be back in the U.S. for 2 1/2 weeks in December. That is unless I happen to win another show. And of course I also have a bunch of Wasamin stuff between now and mid-December. So it’s all good.