It isn’t often that I have the opportunity to go to Wasamin’s monthly challenge campaign. It is held during the week, and during lunch time. So for the many who work, or go to school, or both, it is tough to make it out to the event. In fact, in almost two years this is only the fourth time I have been able to attend. It’s too bad because, not only does Wasamin debut a new song, (meaning a sing she has never performed before) this is also her hometown. Well, I think it is her hometown. Wasamin doesn’t reveal exactly where she grew up, and where her parents still live. But from the clues she has given over the years, we are fairly sure she is from this general vicinity. Anyway…. 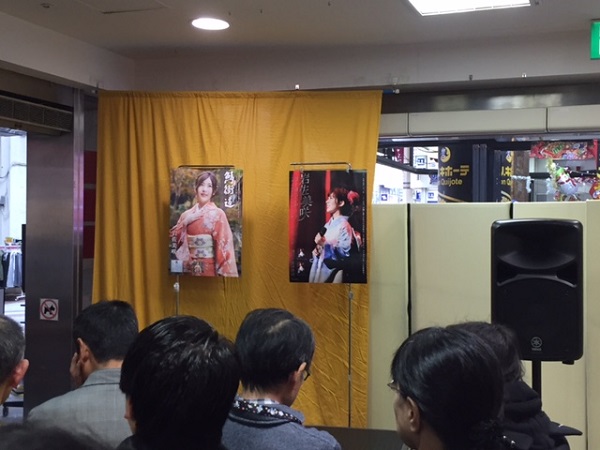 Sings 1-7 all ended up being recorded for Wasamin’s 2nd album, and her 6th single. Makes you wonder which of those songs might become the c/w tracks of her future singles. And quite the range, from 1945-1983. What would she sing today?

Wow, 1993! That’s relatively new compared to what she usually performs. But it is a beautiful ballad.

Some of the fans noted that it was a smaller than usual crowd, although Wasamin usually gets a lot of ‘walk-ups’ when she performs here since she is technically performing outside on a crowded shopping street. During her performance, a lot of people will walk over to check out who is performing. Many just keep walking, but some will stay and watch for awhile.

Since I grabbed a quick lunch right before the show, I didn’t have time to buy CDs beforehand, but I managed to be first in line to get two CDs/tickets after Wasamin finished singing. I was outside talking to a couple of fans, and didn’t notice that the handshake session had started, so I quickly jumped into the line. For my first handshake, I happened to have my study sheet from the Kanji test I took earlier in the day. I showed Wasamin the sheet, which happened to have the kanji for “song” (Uta) on it. I told her that I can always remember this kanji because I think of her standing in front of a microphone. She got a big kick out of that. She then noticed that on my sheet, next to the kanji, is a drawing of a cute girl singing into a standing microphone. She was like, “Yeah, it is me!” LOL

In-between handshakes I had asked the other fans if the Yamano Music shop upstairs from the event sold Wasamin CDs, and if they had the postcards that we can send in to apply for Wasamin’s January performance in Ginza. They told me that they do indeed have them, since Shinseido and Yamano are like partner stores. I interpreted that to mean that it was all one shop, so as I passed the sales table, I asked the woman in charge if they had the postcards upstairs. The fans next to me began to laugh; “Chris, that’s a different store!” Huh, I thought they just told me it was all one shop….

So as I get to the front of the line, Shim-san begins to relate this story to Wasamin and Ichikawa-san, and they all get a good laugh at my expense. In the meantime I was giving them the ‘sad, puffy lipped’ look. And as Misaki-chan grabbed my hand I exclaimed “But I want to see Wasamin in Ginza!” Anyhow, I told her that I would be spending Winter vacation in California. She said she would miss me while I was gone.

I did a little shopping around Kashiwa before heading back to Tokyo. In the meantime my tickets for Wasamin’s ‘Love Live’ later this month arrived in the mail…

2nd row and 6th row. Not bad at all! For the last ‘Love Live’ in the late Spring I was around the 13th row, in the second section. I also have my Minyo Girls ticket for Saturday, which is 10th row.

Wasamin has a bunch of events coming up this weekend. Saturday she will be in Higashi-Jujo and Warabi, then on Sunday she will perform in Koiwa and Akabane. I should note that both the Jujo and Akabane locations are almost within walking distance from my apartment, and Warabi isn’t too far from me either. So I have Misaki-chan hanging around my neighborhood for the weekend. Fun tiems!

And special bonus, Wasamin commercial for the water company she is the image girl for.