The was a last-minute addition to Wasamin’s schedule, although she does do these on occasion, especially during her single pre-ordering period. Perhaps they wanted to give her a bit of a warm-up before her ‘Love Live’ shows next weekend? Not sure, but it was only a week or so ago that they announced Wasamin would be appearing at four different Enka shops on Saturday and Sunday.

Prior to this announcement, I thought I would be having a relatively light weekend. Minyo Girls were doing a free live in Asakusa on Saturday, and KissBee were doing an appearance on top of Tobu Department Store in Ikebukuro on Sunday. However, that ALL went out the window for me when these events were announced, especially since most of the Enka shops Wasamin would be performing in were very close to my apartment. On the other hand, did I really want to go to all four of these events. I mean I love going to see Wasamin, but at each event I need to buy more copies of Saba Kaido. I have lost count of how many copies I have purchased in the last year, but it is easily in the triple-digits. Ultimately I decided I would go to three events; the two on Saturday, and then the late event on Sunday. I chose to skip the early Sunday show since it was in Koiwa, which is not near my house. Okay, my plans were set, until….

I had just finished eating lunch at Akabane Station, and was getting ready to board a train to Higashi-Jujo, when I got the email. I had gotten cancel machi for an AKB48 theater show. 16th Gen, Sunday afternoon. Yatta! Oh wait. Sunday afternoon. That would conflict with the Wasamin event. And the Sunday afternoon event was the on within walking distance from my apartment. Oh no!!! This was a dilemma, especially since it was cancel machi, and not a great cancel machi number, I might add. (#103) If I chose to go to see AKB, there was a decent chance i wouldn’t get in, and then I would be missing out on both events. However, I make it rule to ALWAYS go to the theater when have a win or cancel machi, so that was it. I guess I wouldn’t be seeing Wasamin on Sunday, unless I made the trek out to Koiwa in the morning. Ugghh!

I made it over to Music Shop Dan in Higashi-Jujo around 10 minutes before the event. This is the second time I had been to this shop. The first time was furage day for Saba Kaido, back in January. They were selling Wasamin CDs outside in the drizzle. I bought one copy, and headed down the street to a local community center where they hold their events. (The shop is extremely small) There were about 30 people in the room. 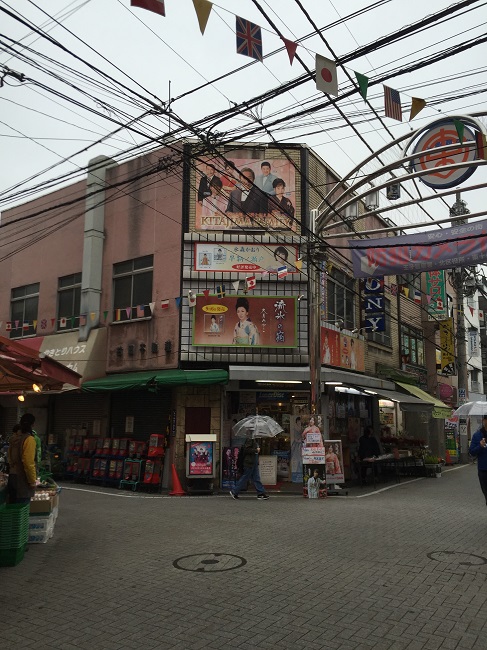 I only had one handshake ticket. During one of Wasamin’s MCs she was talking how cold it was this weekend, and mentioned that she was wearing ‘Heat-tech’ underneath. So I told her that I was also wearing Uniqlo’s Heat-tech. She asked if i had on tops and bottoms, but I told her just bottoms. She then asked if I would be going out to Saitama for the late event, which I affirmed…

Now there was over 2 hours to kill between the first and second events, and Warabi, which is in Saitama, is only 10 minutes away. I decided to kill some time by going to the local Dotour for a cup of coffee. I sat in the coffee shop for around 30 minutes or so, before heading back to the station. However, it dawned on me that Wasamin usually doesn’t leave the shops until a little while later. I hope I don’t awkwardly run into her on the street. As I walked past the shop, there was no sign of Wasamin. Cool. So I headed back to the station. I would still be getting to Warabi fairly early. I would figure out what to do when I got there. I went down the stairs to the platform. Oh shit…..

There’s Wasamin, standing there with her manager and assistant, waiting to board the train.

I quickly motioned an apology (praying hands) and walked down to the other end of the platform. For good measure, when we got to Warabi, I took a seat on the platform for about five minutes or so, and waited for Wasamin to hopefully exit the station before heading out myself. That would be the fourth time I have run into Wasamin out in public. And I know she likes her private time, so I don’t want to disturb her like that. With nothing to do, and an hour to kill, I went into the Warabi Dotour and had another cup of coffee.

I headed to the shop, which I had also been to before during Hatsuzake preorder. It is a tiny shop, and I wondered how the heck they were going to hold a performance there, unless, like many other shops, they had some kind of private performance area in the attic or something. Wasamin’s assistant opened the door, and said “Chris-san come in!” As I was purchasing my CDs at the door, I explained to her why I was still in Higashi-Jujo, and apologized for running into them at the station. She laughed, and said it was all good. A Tokuma rep happened to be there, and wondering what we were talking about, so she related the story. Anyway, they jammed us into this tiny store. It was so tight that shortly before the event they asked us to scrunch over to the left when Wasamin came in, so she could get through, LOL.

I had two tickets for this event. As I stood in line, a couple of fans asked me what I did between the two events, and I related the story about seeing Wasamin at the station. I also mentioned my cancel machi for AKB, and they all thougt that I probably wouldn’t win. Anyhow, Wasamin had talked about all of the cassettes in the store. So when it was my turn I told her that when I was a kid, that is how I listened to music. (I neglected to mention that I actually go as far back as vinyl and 8-tracks) It was at this point she asked if I would be coming to the Sunday events. When I said I wasn’t sure, she was like “Ehhh, why?” But I was being pushed away. I had another ticket though. So when I came back around, she again asked why I wasn’t sure about Sunday. I was like “Well, I have cancel machi for AKB…” She immediately yanked her hand back, folded her arms and gave me the pouting look, LOL. I was over a barrel, so I immediately blurted out that I would be coming to Koiwa. She started giggling, and said she was only kidding. Phew, I don’t want to get on Wasamin’s bad side. After that I quickly bailed back to Tokyo since I had dinner plans, and I wanted to pick up a postcard to apply for Wasamin’s New Year Enka appearance. 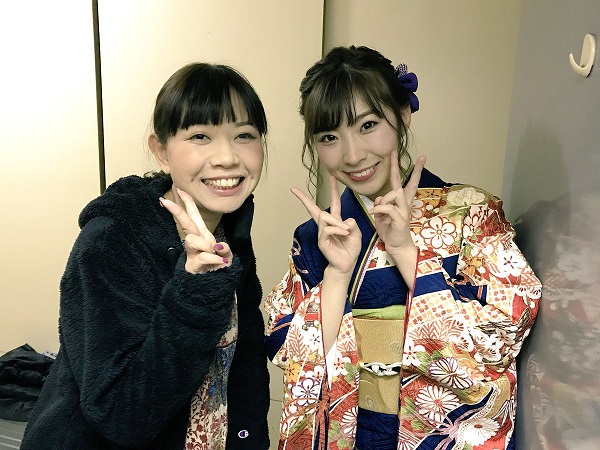 Apparently Ikeda Megumi, who is a presenter for TBS Radio, was at the event. I didn’t notice her. Perhaps she was backstage. 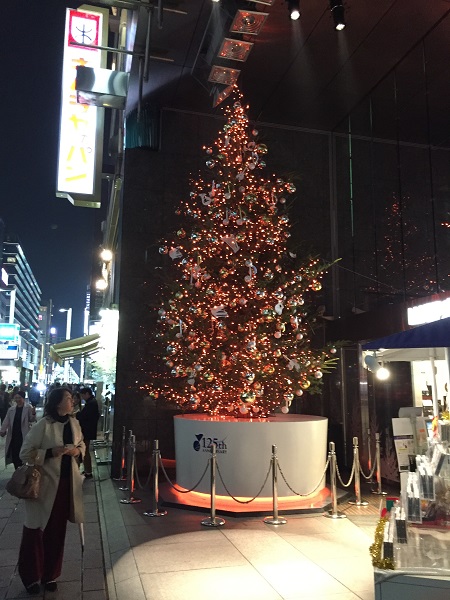 I decided to not bring my Happi-coat on Sunday since I was going to be out all day, into the evening, and didn’t feel like carrying it around all day. I made it to Koiwa around 15 minutes before the event. In fact, all the fans were already inside the upstairs venue. Once again, around 30 people. This is actually the third time I have been to this place. Again, for Hatsuzake preorder, and for Saba Kaido release week.. 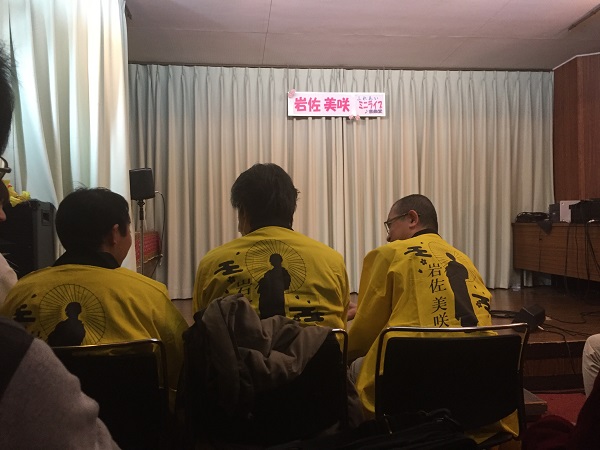 During the MC, Wasamin again brought up all the people who weren’t wearing their Happi. Dammit! I was wearing it yesterday! Then she made a big deal out of who was going to the event in Akabane later on. Wasamin indirectly giving me crap via the MC? Anyhow, I only had one ticket to see her this time, and as I got to the front Wasamin again pointed out that I always do the hand motions on her songs. In fact, she said it as “We do it together,” and said she actually aims it at me sometimes. (I actually noticed that a couple of days ago, she was aiming at me when she pointed to the audience) told her that I went to Ginza and got a postcard for January, so she was happy about that. Normally these Enka shops don’t want you milling around after you are done with your tickets, so I took off. I had a lot of time to kill before the AKB show (Which I ended up winning, it is on the previous post) but I also had a couple of errands to run. Oh, and I do have the setlist for Akabane…

Akabane Setlist
1. Hatsuzake
2. Toshishita no Otokonoko
3. Mugon-Zaka (the song she debuted at her challenge campaign this week)
4. Saba Kaido

I really like the Otokonoko song, so I am kind of sorry I missed it. Anyhow, Wasamin will be spending this week rehearsing for her ‘Love Live’ concert in Tokyo on Sunday. The following weekend she will be performing in Hiroshima and Fukuoka. The weekend after that will be her Lunch Cruise event, which I am really looking forward to. So still lots going on between now and when I jet over to Cali for Christmas. And one more bonus, Wasamin modeled one of the new goods available at Sunday’s show…

A soccer jersey? Awesome! I hope they have my size!