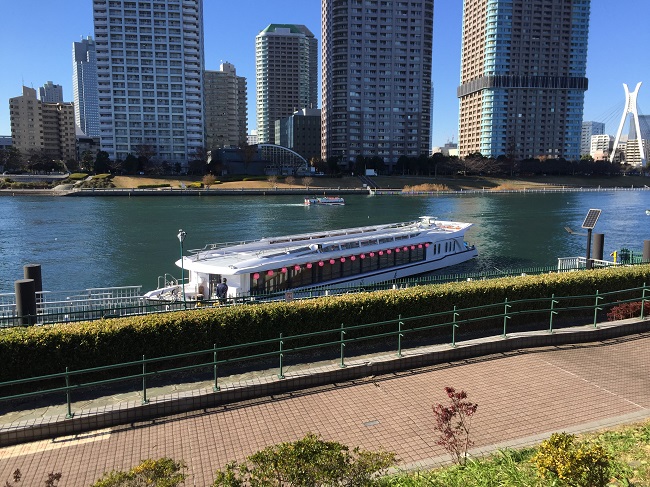 It’s always exciting when I receive a mailer from Wasamin. I never know what surprises might be contained within. Will there be some new, exclusive fan club items? A special event? Perhaps another dinner show or concert? The last major mailer had a few interesting promotions. Wasamin’s 4th solo concert, Nagara Pro’s Enka Matsuri, and a fan club event, which was the biggest surprise of all…

As a special treat, Wasamin announced that her end of the year fan club event would be taking place on a boat, complete with lunch, entertainment, games, and a cruise down the Sumida River past Sky Tree. Sounds like fun, eh? 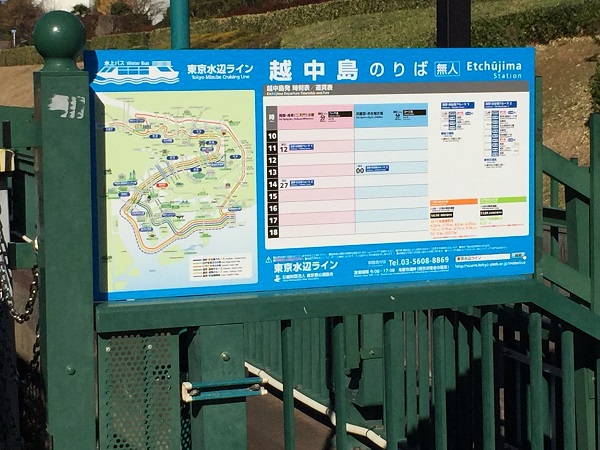 I quickly sent my application in well before the deadline, since I wanted to make sure I didn’t get shut out of this event. Interestingly, I got a telephone call from Nagara Pro a couple of days later. When I sent in my payment I naturally added 600 yen to the price of the ticket, which has been standard procedure with every Wasamin event I have ever paid for. However, it turned out that they weren’t charging the fee on this event. They didn’t want to send the money back to me, so they extended my fan club annual membership an extra month. At the deadline, Wasamin’s manager made the announcement that they had a very response to the event, and they would be renting a very large cruise boat so everyone could fit. Cool beans! 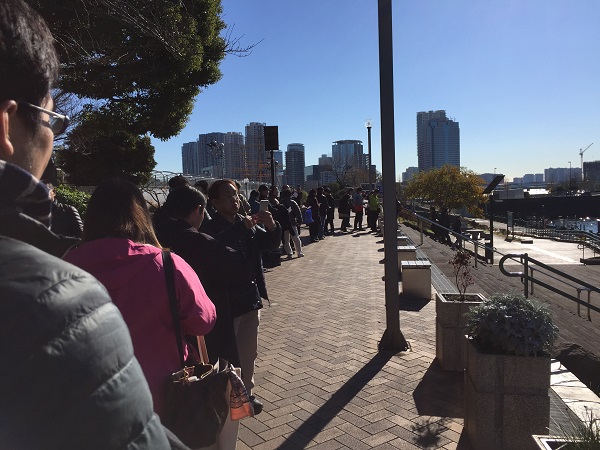 I made it out to the Etchujima docks in the late morning, and there were lots of fans milling around, waiting for check-in. I wanted to take a picture of the boat, but when I got there Wasamin was doing a photo-shoot on the top deck. When she finished, she waved to us and went below. At check-in they gave us a Nagara Pro guest pass, and told us where our seat assignment would be. I would be at table 3-B. I figured that would be somewhere in the middle, which was probably good since I sometimes, not often, but sometimes can get a little queasy on small boats. Although this was a river cruise, and the boat wasn’t that small. It was funny though, since we are supposed to show our fan club ID at check-in, but since I am the only foreigner the girl immediately exclaimed “Christopher-san!” without me even showing my ID, LOL. I have seen my name on the manifest before, and it does sorta stick out since it’s the only one not in kanji, AND it’s in all-caps. One by one we boarded the boat, storing our shoes since it had a tatami floor. There were small placards with our names at our assigned seats, and our bento lunch was waiting for us. Once we were all boarded, the boat left the dock. Wasamin was immediately introduced, and we were asked to open the bento. 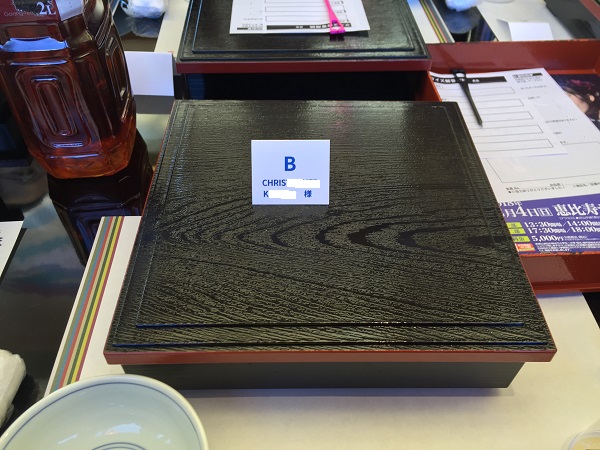 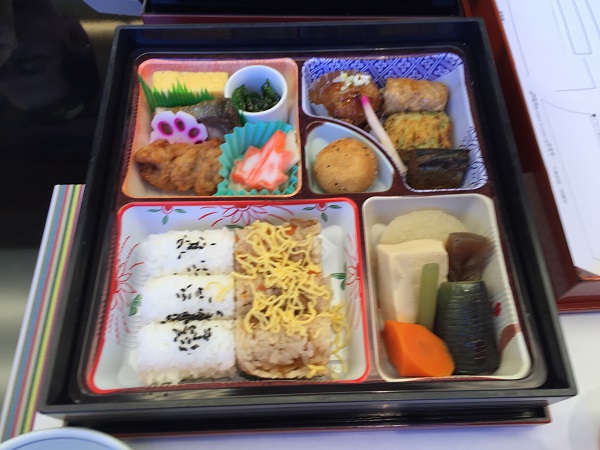 Quite a luxurious lunch, eh? It has just about everything on it. But that wasn’t all. They would also be bringing out tempura, and soup. As for drinks, we had unlimited oolong tea. 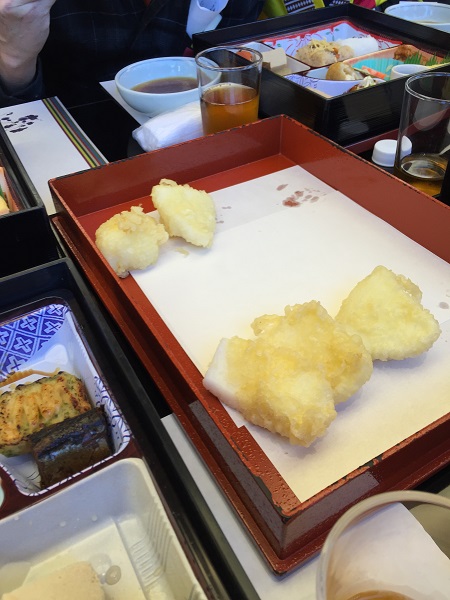 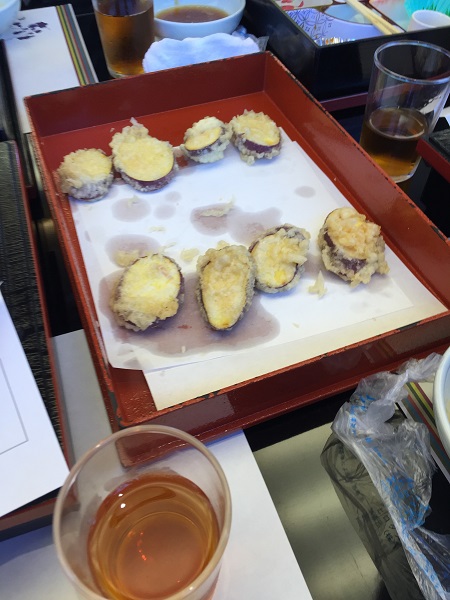 So that is squid, fish, sweet potato, and of course, EBI! Now at one point one of the fans asked Wasamin if she was eating a bento box too, but she said she couldn’t eat at the event. However, that ALL went out the window when the tempura came out. Wasamin took one look at the squid and was like “I wan’t squid too!” She immediately sat at one of the tables and took a piece, LOL. Ichikawa-san came running over with an extra plate, a napkin, and a drink. The funny thing is, I think all of us were wishing she had stolen our tempura. (the fan got another piece) Not surprisingly, it happened again when the Ebi came out. Wasamin saw the giant shrimp and practically started drooling, so they brought out a piece for her too. LOL

Wasamin also promised there would be fun and games too. The first contest was a sort of “Name That Tune” type of game where they would play a one-second snippet of a Wasamin song, and you had to guess what it was. Only one person got them all correct. People that got four or five won prizes. I only got two correct. But it actually was quite difficult. Not very many people got 4 or better. BTW, the answers were 1. Saba Kaido, 2. Heavy Rotation (Enka ver.) 3. Nagori Yuki, 4. Kita no Hotaru, 5. Namida no Sanbashi.

The rest of the contests were all Janken. I came close on the first contest, but ultimately didn’t win. As for the prizes? It was mainly a bunch of leftover stuff from Wasamin’s trip to France. T-shirts, Uchiwa. Oh, and everyone who didn’t win got a random bromide, also from the France events.

Wasamin reminisced about the past year, and all the different things she got to do, like travel and perform overseas. We were also counting how many solo concerts she did. Ultimately she did EIGHT major solo performances, and that isn’t event counting the Enka ensemble concerts she regularly appears in. That’s a lot of shows. It makes one wonder why they are still using the counter (2nd concert, 3rd concert etc.) At one point she started asking us how we liked her hair. She first asked if we like when she grows her hair long, and a lot of people raised their hand. Then she asked if we liked it the way she just got it cut. Oh crap! She trapped us. WASAMIN! So of course most everyone raised their hand. That was the answer she was fishing for, LOL.  Finally, it wouldn’t be a Wasamin event without a bit of singing. After all, they DID have a full karaoke setup on the boat too. The short, 2-song setlist…

And keeping with tradition, we were allowed to shoot photos during this portion of the event. Here are some of my best shots…. 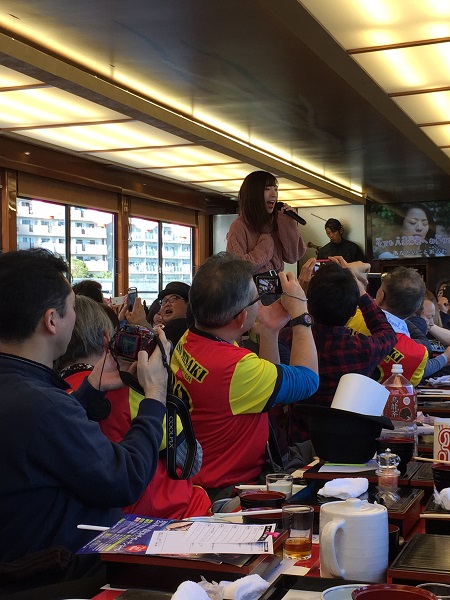 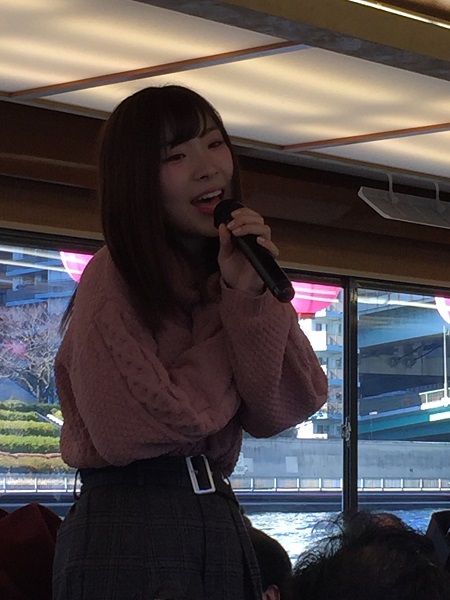 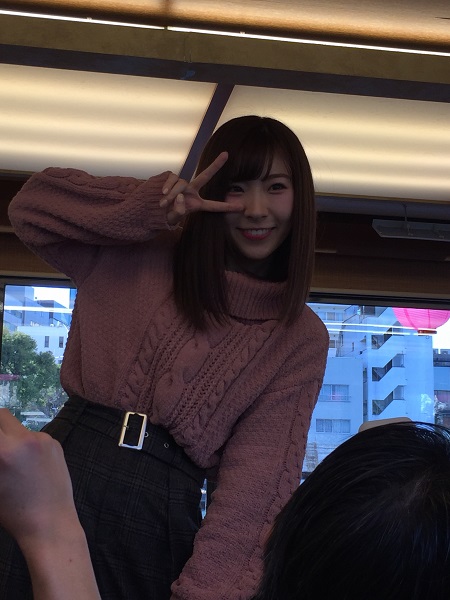 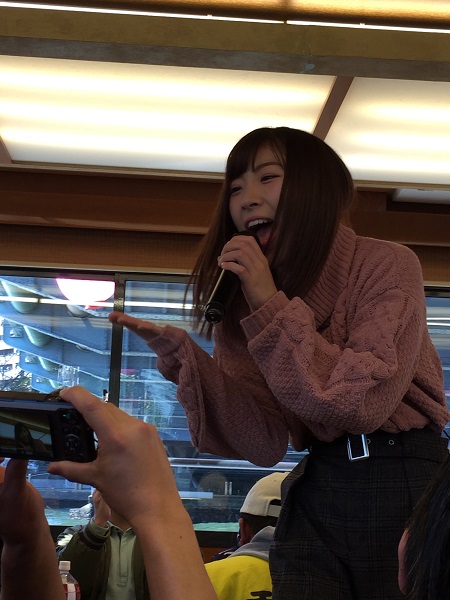 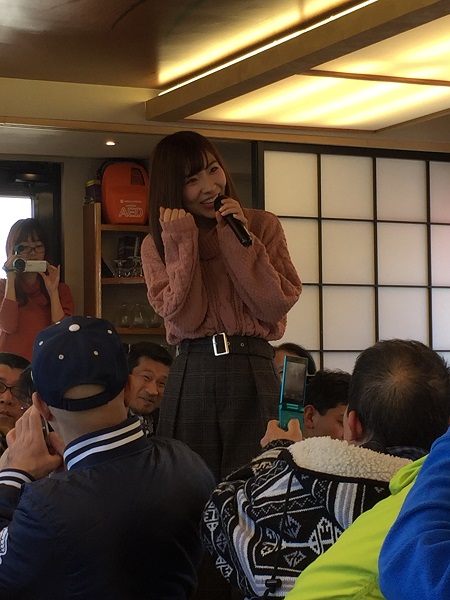 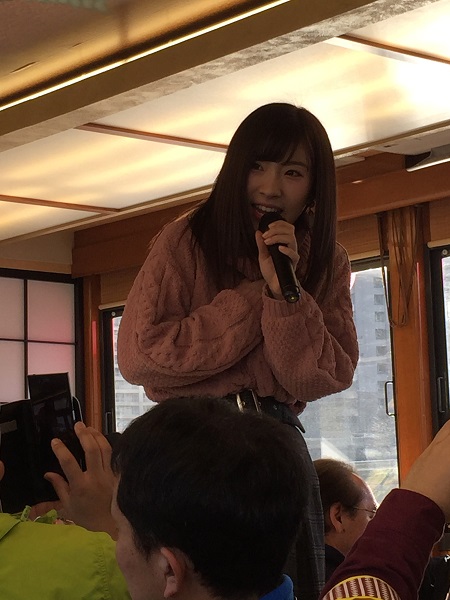 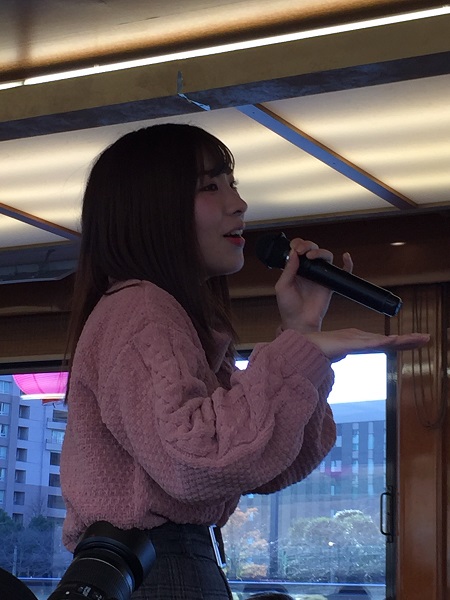 And that ended the event. One by one we filed off the boat, where Wasamin was waiting for us for a short handshake and talk. I told her I was going out of town for Christmas and my birthday. At first she confirmed I was coming back, then wished me a happy birthday. Once everyone was off the boat, Wasamin gave us all one last farewell, and boat took off back to its main dock; Wasamin giving us one last wave from the window. 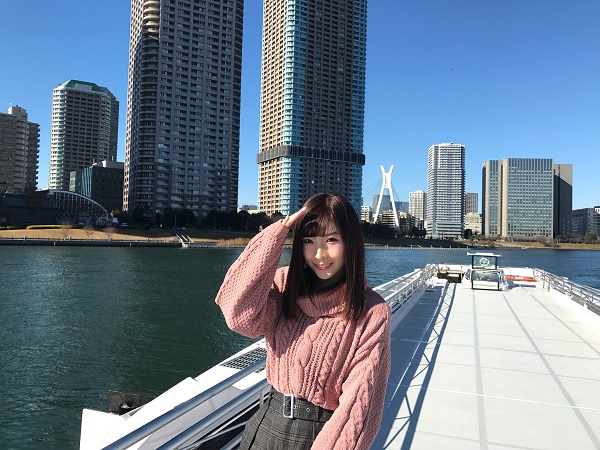 And that will likely be my last Wasamin event for 2017, unless she has something pop up just before the new year. The next event I can attend will be her Yamano Music event on January 2nd, but I have to win the ticket first. But yeah, it has been an incredible year to be a Wasamin fan. So many concerts, dinner shows, fan club events, mini-lives. She totally spoils her fans, which is why I have heard many fans of other AKB members say they are jealous of all the access Wasafans get to their oshimen. I should go back and count how many Wasamin events I went to this year. Perhaps I’ll have some time to do that over the holidays.