After a 1-month Wasa-vacation, I finally got a chance to visit with her on Tuesday.

Yes, the last time I spent time with Wasamin was at her Fan Club boat event on December 9th. It was just two days later that I would take off to California for 2 1/2 weeks, returning just in time for New Years Eve. When I got home, aside from dropping my bags, I was most looking forward to checking my mailbox, hoping there would be a ticket to Wasamin’s New Year’s Live in Ginza with Mizumori and Hayabusa, but unfortunately I got skunked for the 3rd year in a row

However, there WAS a correspondence from Wasamin in my mailbox. It was the latest edition of Misaki Magazine! Here are a few pages… 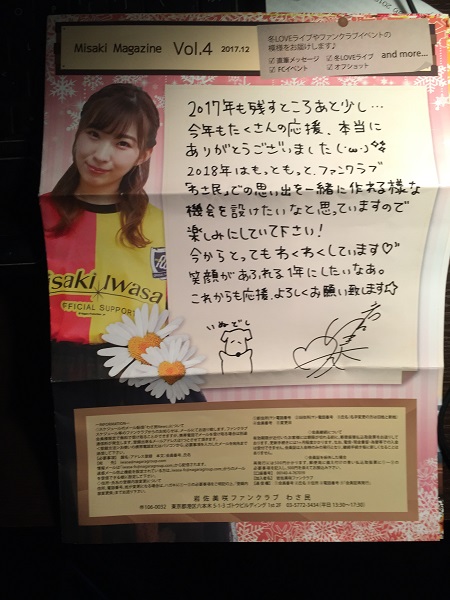 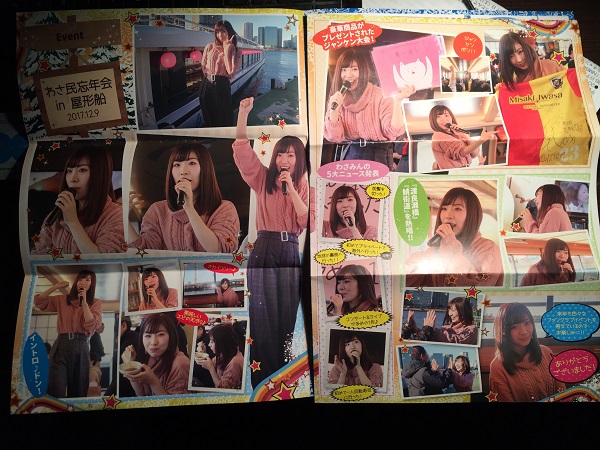 I was surprised there was such a tiny mention of the San Francisco event. The magazine focused on her Love Live Concert, and the Boat event. But it’s a really nice magazine, and I always look forward to receiving it. A couple of days later I received this…

A New Year’s Card from Wasamin, yatta! I got one of these last year as well. Anyway…

This past weekend, Misaki started her new single promotions, beginning with three days in Northern Japan, performing in Morioka, Aomori, and Miyagi. Beginning Monday she started her Tokyo portion of the tour. Two stops each Monday through Thursday. Then after a day off, she goes to Osaka on Saturday, then back to Tokyo on Sunday which looks to be an important day since she is performing at Sunshine City. That is usually where Wasamin makes big announcements and visits with the press. So I am guessing we may be hearing the new song, or at least finding out the title. Anyway, here is her schedule from yesterday (Monday)

She also has a few appearances scheduled in Chiba toward the end of January, including her monthly challenge campaign. BTW, this was the Setlist for Tuesday’s performance in Asakusa

In one of the MCs Wasamin was going on an on about how her manager is a very interesting person, and that is always surprised by her manager’s stories. Of course Ichikawa-san got all embarrassed, since Wasamin was implying that she was weird, LOL. For the rest she was promoting her upcoming concert, as well as the rest of the events this week.

It was a relatively small crowd. Then again, it was in the middle of a work day. Perhaps she will get more people in the evening, and on Sunday. I chose not to go yesterday because I was really tired from the weekend, not to mention the rain. As for tonight, I just didn’t feel like trekking out to Yokohama. I will probably go to most, if not all of the remaining Tokyo events this week.

It should be noted that like with Saba Kaido, Wasamin has a stamp card for this single. Among the prizes are an oshi-towel, tote bag, and a Jacket! But you need to buy A LOT of CDs for that one. I bought two CDs today, and had two handshakes….

For the first handshake, Wasamin welcomed me back, and I told her a little about my trip, mainly about the weather being nice in California, warm enough that I could go swimming. She was like “Ehhhhh???” When I looped back around Wasamin remembered that the NagaraPro Sakura Festival is in Itabashi, so she asked if I lived close to the venue. I told her I could almost walk to it. (Actually, it would be quite a long walk, better to take the train) But I told her I would be there since she will be in my neighborhood. Well, technically she will be in my neighborhood tomorrow as well since Music Shop Dan is probably closer to my house than Itabashi Cultural Hall.

Anyhow, I took off and went to Senso-ji to enjoy some New Year’s festival food. I ate grilled fish and grilled crab. Yum! I would be ready for a Wasa-doubleheader on Wednesday.

I finally participated in a full day of Wasamin pre-order events, after missing out on Monday entirely and only attending the early Tuesday event. Since there are ten Tokyo-area events this week, I am trying to pace myself. Although I promised Wasamin I would go to the Nakano event today (Thursday) and I am meeting a friend in Shinjuku in the afternoon, which is right by where she is performing in the evening. So I guess I will be attending both shows today too.

The first stop was one of Wasamin’s usual enka shop stops, Music Shop Dan in Higashi-Jujo, which is almost within walking distance to my apartment. I met up with my friend Derek for a little New York Pizza lunch before heading over. I have been to this shop to see Wasamin a couple of times before, and they usually hold the performance in a small community center around the corner. However, this time they would be holding the event inside the tiny shop. Like the little Enka shop in Warabi, they had to squeeze us in. 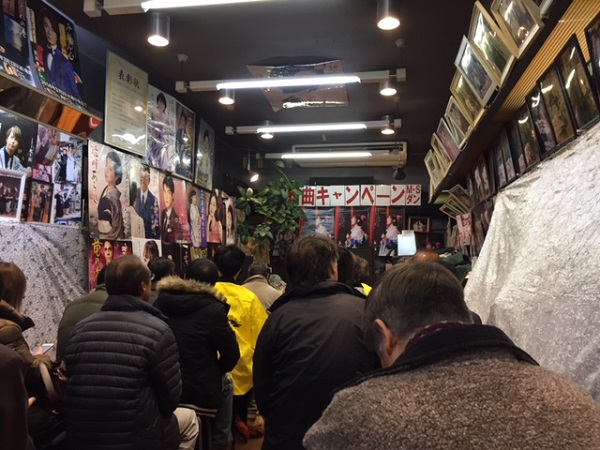 Here is the setlist…

I wanted to tell Wasamin about my interaction with Shiichan and Myao on Saturday. Since I know Wasamin is good friends with Myao, I made the story primarily about her, and explained that Myao thought I was an HKT fan since I was wearing my HKT48 T-shirt, but I corrected her and told her I am a Wasamin-oshi! Wasamin and Ichikawa-san both laughed,and I told them that Shiichan was also part of the conversation. She asked me who else was in the lane, and kinda giggled when I mentioned Chori. Also, Wasamin was happy I brought Derek again, and thanked me for helping him with what he wanted to tell her in Japanese. I would head home and relax for a while beforgoing to Ikebukuro for the evening event.

Wasamin had a considerable larger crowd for the evening show. (I suspect the same thing occurred on Tuesday night, and will probably happen tonight) I showed up just before showtime after having a couple cocktails at The Hub. Wasamin was wearing her black Kimono, which is one of my favorites. When I told her it was one of my favorite Kimonos, she asked me how many points. I wasn’t sure how to answer that, so I told her “full points.” LOL, I think I made the point.

Most of the fans were still filling out their pre-orders, so I looped the line. I mentioned that Nakano Broadway is where I used to buy all of my Wasamin photos when she was in AKB. Trio II in Nakano Broadway was AKB Photo Mecca back then. She asked if that meant I was coming tomorrow, which I confirmed. I kinda wanted to make this an early night, so I took off right after my second ticket.

So back on the horse tonight, so to speak. I will have two more events to report. As for Sunday, I’m not sure how that is going to play out. I do want to see Wasamin, and will definitely be at the early event. But I am torn between hanging out for the second event, or taking off to see Minyo Girls in Suidobashi. I guess I will let the time make the determination, as it will depend on how late Wasamin’s first event goes.