I love both of the new PVs, especially the one from the new CD. So pretty, and such a cute concept. Anyway, I had an open Saturday. And since Wasamin was down in Osaka for the day, I decided to see what other groups I like might be performing. Luckily, Minyo Girls added this appearance to their calendar at the last minute. I have been itching to see Minyo Girls live ever since their new CD came out around Christmas. This was the first chance I had, although Kumagaya is quite the trek. It is in Northern Saitama Prefecture, almost to Gunma, and takes over an hour to get there from Shinjuku. However, it is a direct shot on the Shonan-Shinjuku/Takasaki Line, so I decided to go for it. My other option was to go see KissBee in Laketown, but I opted for this. BTW, I saw Wasamin at this mall last year, so I was familiar with the layout.

The setup was basically each group alternated doing their event. Minyo Girls were 1st and 3rd, Hayabusa was 2nd and 4th. For some reason, they tore down all the other group’s stuff when one was performing. I’m not sure why they didn’t just keep everything up the entire time. Also, they were doing a cross-promotion with some hand cream/facial cream company, and were doing “treatments” on people right next to the event. (You got samples when you purchased CDs, LOL)

Another interesting, although not surprising phenomenon; I arrived 45 minutes early, but ALL THE SEATS were already reserved by Hayabusa fans. Female fans, jeez. They are more rabid and obsessive than the guys, I swear. Minyo Girls were performing first, but pretty much ALL of their fans were relegated to the standing area in the back. A couple of the Hayabusa fans eventually “Loaned” their seats to Minyo Girls fans, but not very many. They pretty much camped out in the seats for all four shows. The rest of the seats were taken by the local elderly crowd, who usually flock to events like this in small, out of the way towns. Anyway, I got my hands on a couple copies of the new release…

The odd thing was that the booth was only selling copies of “Minyo Girls I” when I got there. It was only after the girls started performing that they brought out the rest of the merchandise (although they were sold out of Minyo Girls II) They didn’t have very many copies of the new CD either, and sold out early on. Also, here is the new flyer they were passing out, with the animated versions of the members from the “zashikiwarashi” PV. 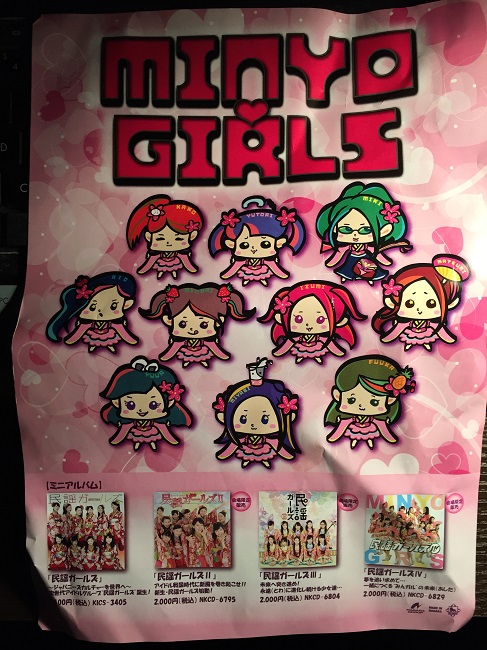 I ended up getting three tickets, hoping to do at least a couple of chekis with Miyabi and Yua. Unfortunately, they weren’t offering chekis for this event. Instead, one ticket got you a group shamekai. On one hand that’s pretty cool, except I really didn’t want THREE of basically the same group shot. I think I could have saved the ticket for a later date, but I wasn’t sure. So I just did the three shots… 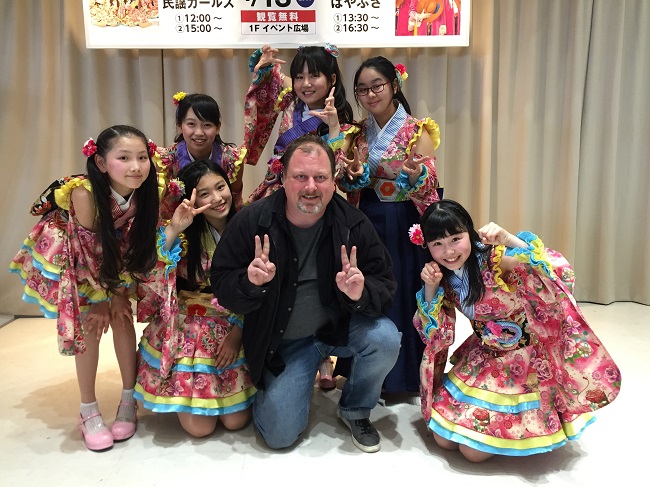 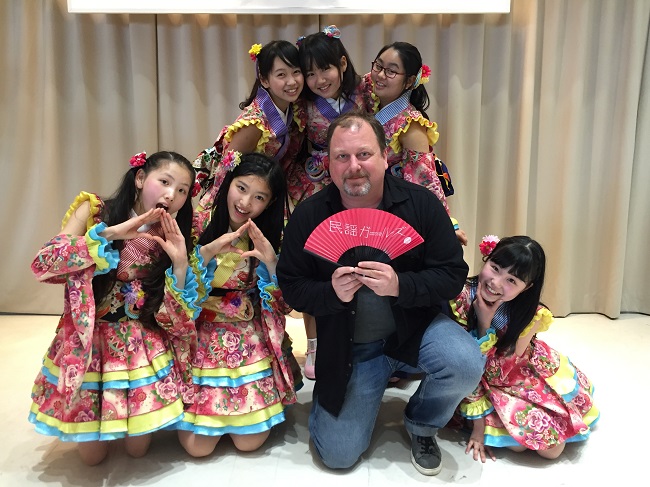 There were only six members at the event, who happened to be all the members who live closest to Saitama. In fact, Yua is from Saitama, so they made a big deal out of that. I did get a brief chance to say hello to Miyabi and Yua (my two favorite members) while they were passing out their “business cards.” Yua came over to me, and Miyabi ran up right after like “I was ginna give him one!” LOL. I also had a chance to talk to Miki the shamisen player, who was selling CDs. Miki actually came to Wasamin’s event in Shinjuku on Thursday. So I asked her if she had fun. She said she had a lot of fun hanging out with the Wasamin fans. COOL!

And here are a few performance pics. I’ll put one of Hayabusa on the bottom, since I did watch their early performance. 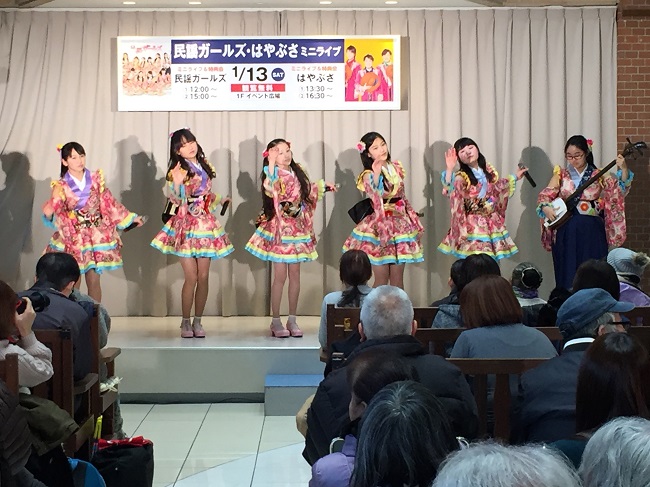 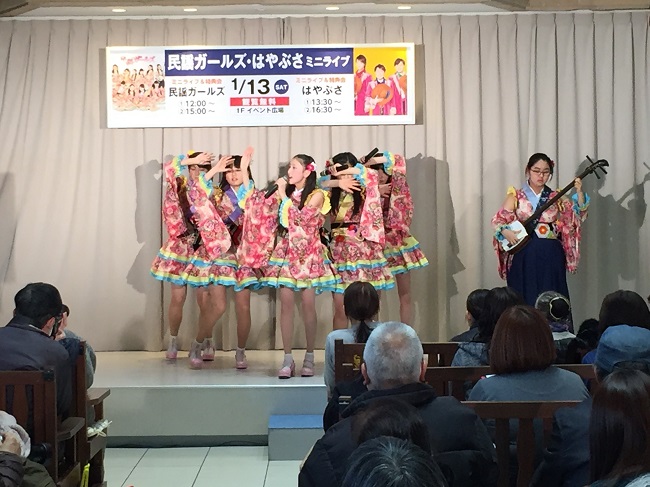 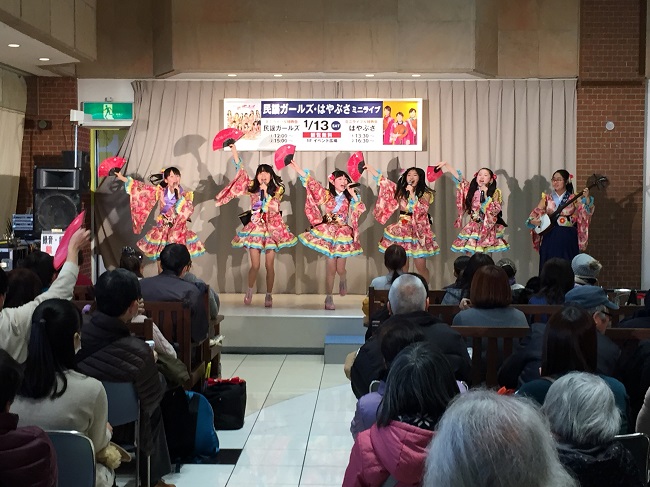 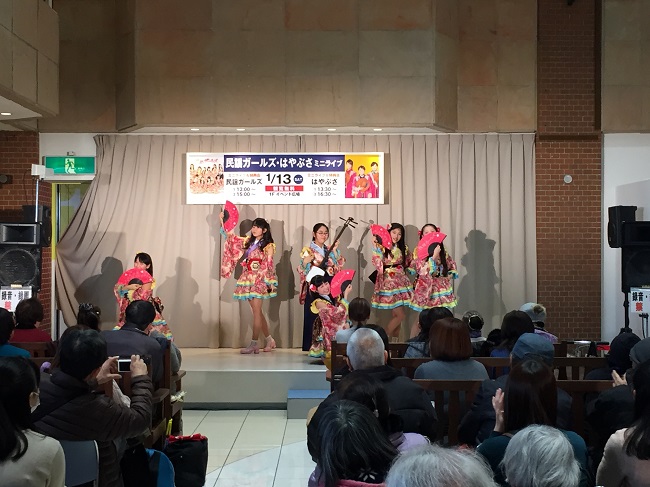 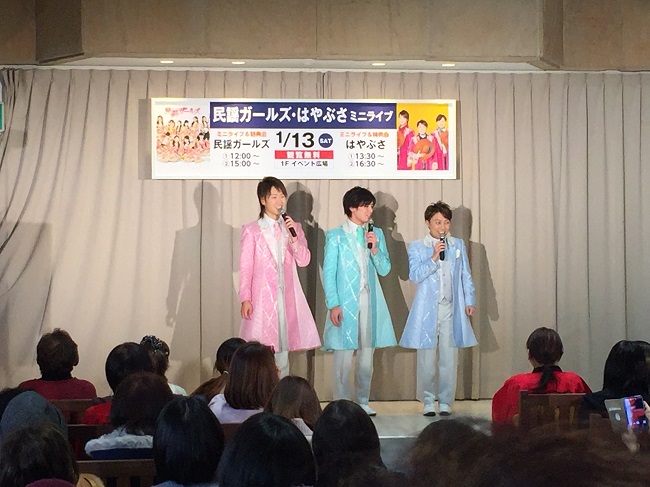 I was considering bailing on Wasamin’s late performance on Sunday to go see Minyo Girls at Tokyo Dome City. (Yes, while the AKB shows were going on) However, since I got to see them on Saturday, I stuck with Wasamin on Sunday. Next up for me and Minyo Girls will be their Solo Live next Sunday in Yokohama.