Wasamin wrapped up her week and a half of promotional events with two appearances on Thursday.  Then after a “day off” where she recorded a television program, and an event in Osaka, (which I did not attend, see the previous post) she finished up with two shows at Sunshine City in Ikebukuro.

This would be the seventh consecutive day of Wasamin doing promotional events. This would also be the second consecutive day I would be attending both events. First heading out to Nakano in the mid-afternoon, and then going directly to Shinjuku, where I would be conducting a little business, and then finding two friends who would decide to accompany me to the mini-live. First up, Nakano…

I have been to Nakano Broadway many many times. Not only is it home to a major branch of Mandarake, but it is the original home of Trio2, which back in the day was a mecca for collecting AKB merchandise and pics. Not to mention it is right across the street from Nakano SunPlaza, which was a frequent stop for the Hello!Project groups when they performed in Tokyo. I saw Morning Musume there a couple of times in the late 2000s, as well as C-ute during the “1,2,3” Tour.

Meikyoku-do, the Enka shop Wasamin would be performing in, is on the “hidden” 2nd floor of Nakano Broadway. I saw that because the escalators there do not stop on the 2nd floor, going straight from level 1 to level 3. You have to take a side staircase to get on the 2nd level. But I knew that already. I had never taken a good look at this shop before. And boy was it tiny! 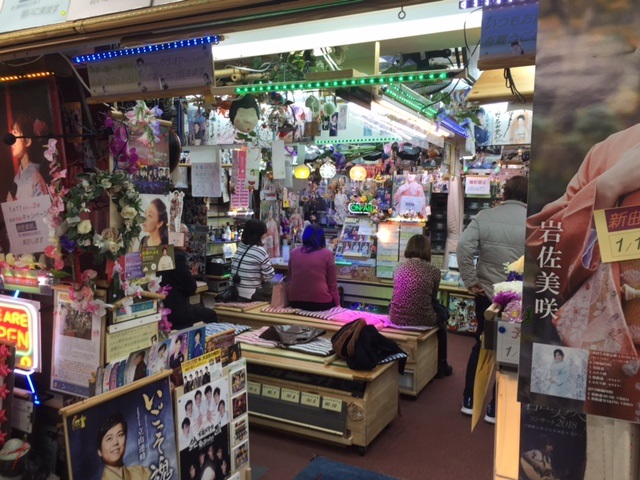 Of all the little Enka shops Wasamin has performed inside of, this has to be the smallest of all. Not only that, it is filled, floor to ceiling with random collectibles and souvenirs, many of which had nothing to do with Enka. Actually, I thought it was quite adorable. I actually got their early, and was able to sit front and center. I was literally inches away from Wasamin while she performed. Here is the matinee setlist.

It was a special treat to hear Wakare no Yokan, since it is a song Wasamin has only recently started to perform. Also, we were all instructed not to cheer loudly since it was such a small shop and it may bother the neighboring shops. So most of us either 1) did a very low cheer, or 2) pantomimed cheering. Both had Wasamin laughing. I had two handshake tickets, and for the first one I commented on how cute the shop was. I pointed to the pictures of Mizumori Kaori-san right above her head, as well as the shop’s Alcohol collection. Yes, they had a full assortment of booze on one wall. Wasamin asked me if I liked drinking. Of course! I usually go to the bar before her evening events. For my second handshake, since I know Wasamin was once an H!P fan, I told her my experiences of the concerts across the street. Wasamin asked me if I still liked H!P, but I told her not anymore.

It was a small place, but I took off after my second ticket. The shop proprietor stopped me to thank me for coming as I left, which was nice. 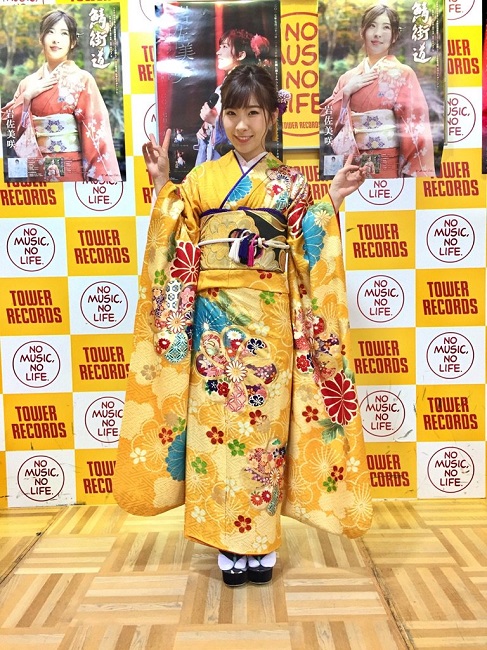 I got to Shinjuku early since I was meeting a friend for coffee. Also, another friend of mine was nearby getting his smartphone repaired. So after talking with my friend for a while, I got ready to leave to go to the event. I asked her if she was interested in going to the event. To my surprise, she emphatically said “YES, I want to meet Wasamin!” She is well familiar with AKB48, but has never seen any 48-group event in person before, so she was excited to meet a “real- live idol.” Around the same time, my other friend (A Sasshi fan) had finished his business, and announced he was coming to the event too, since he hadn’t talked to Wasamin since she was in AKB. Awesome! Two friends!

We got to the event around 20 minutes early. My friend Aya was in awe of how small the venue was, and we were right against the stage. She asked why I wasn’t wearing my Happi, so I offered to let her wear it instead. Just then, I turned around a saw an unexpected familiar face, or so I thought. I walked over and whispered to one of my Wasafan friends; “That’s Miki from Minyo Girls, isn’t it?” Yes it is! Miki is the Shamisen player in Minyo Girls, who I have talked about often on my blog, and in the Stage48 thread I created for the group. She was hanging out, talking with the fans. I caught her eye and she waved to me. So cool, Wasamin had a “celebrity” guest, LOL. Here was the evening setlist…

Niji wo Watatte is one of the most fun songs to hear Wasamin perform since the fans chant her name between each line of the verse. It was also a treat to hear “Otokonoko” since that is another song she seldom performs. I was watching my friend Aya during the performance, and she had the greatest smile on her face. I could tell she was having a great time. In fact, Wasamin actually talked to her at one point during the show noting that it was her first time at an event, yet she was wearing a Wasa-Happi. She would find out later that it was my coat.

So for my first handshake Wasamin thanked me for bringing to fans to the event, and also noted that I brought Derek to the event the day before. She really appreciates that I bring friends to see her. For the second handshake I had mentioned that Frank was also in town, and wanted to come see her, but came down with the flu at the last minute. She gave me the “crying” gesture. But I told her that he would try to come to an event when he returns. I forgot to mention that I have another Wasa-fan friend coming to town next week. (Kenjimaru, who she knows) Hopefully he will make to an event too.

This event was the culmination of a week and a half of mini-live events, beginning in Northern Japan, and after four days of Tokyo events, a quick trip to Osaka before finishing here. Wasamin didn’t have a live performance on Friday, but it turned out she was recording a television program that day with her senpai from Nagara Pro. 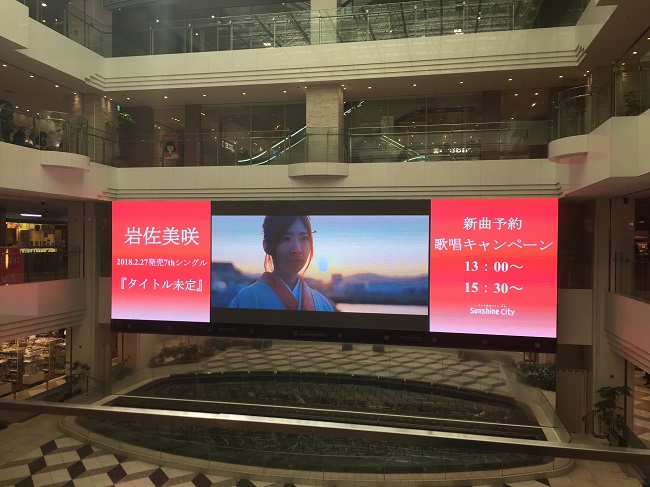 Considering this event was being held at Sunshine City’s fountain square, many fans were anticipating an announcement of some sort. This is usually where Wasamin holds her furage and/or press events, not to mention it is a high-profile place to hold an event. Sunshine City is a huge mall, and on the weekend it is slammed with shoppers. Ultimately there were no big announcements. Just a big live event, with a nice turnout.

I had a weird run-in with the staff of Shinseido, who run the Sunshine City events. When you preorder CDs for this event, you get to draw for priority seating. I filled out my preorder form, purchasing three CDs. At this point the clerk began asking me a question. I was reasonably certain I knew what he asked. He was saying that I can only select priority seating for one of the two events. It’s dumb, but you have to fill out two separate preorder forms to get two priority seats. In any case, I told him the last event. But he is telling me I don’t understand the question. So I repeat, the last event. Again, I don’t understand. I tell the guy I want to go to both events. And he is saying I need two forms. He is holding up the forms. So I say fine, I want a ticket for the last event. Again, I don’t understand. So now I think I really don’t understand, so I tell him how I am going to distribute my handshake tickets at the event. Now he is frustrated, so he gets a clerk who speaks English. She explains to me what they are asking, which is what I thought they were asking. I said. “I told him three times already, I want a ticket to the last event!” It just pissed me off that I did understand the question, answered appropriately, and he treated me like I was an idiot. It was compounded when he told me my total was 3702 yen, and he gave me a confused look when I put 5202 yen in the tray. I mean, c’mon! I got the last laugh, however, drawing priority entry #3. I got to be front row center, and actually had a pretty good vantage point for the early show too, although I was standing. Anyway, here are the setlists… 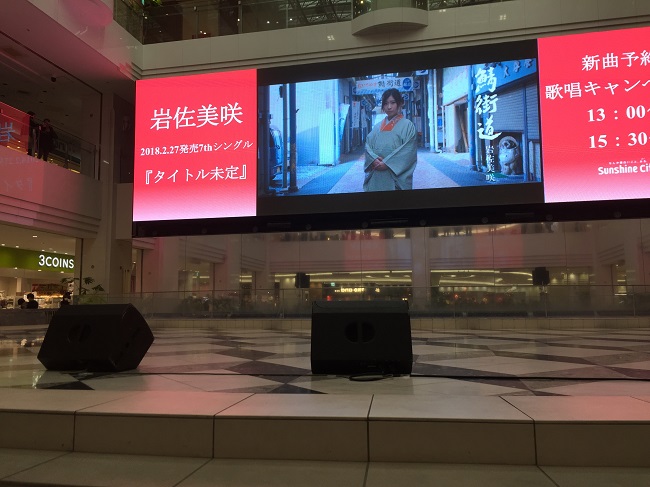 Whenever Wasamin performs at a big mall like this, I love to people watch, watching the reactions to the passers-by. Quite a few of them will recognize her from her AKB days, and get really excited. It’s just neat to see the smiles on the faces of people who are seeing Wasamin perform live for the first time. And again with the “Otokonoko” song. I wonder if this is a preview of one of the new single B-sides?

I ultimately had three handshake tickets for the two events. I used one in the early show, and told Wasamin that I ate Saba the previous evening. Suddenly she said “Oh yeah, I saw your tweet last night!” (I had tweeted a pic of the saba and linked it to her) She asked if I went to dinner alone, but I told her that I was with friends at Iso Maru Suisan, which is a 24-hour izakaya chain that specializes in fish, particularly grilled shellfish. Wasamin is well familiar with this restaurant chain, and seemed to be somewhat surprised that I ate there. But I actually eat there all the time, and have for quite a while. 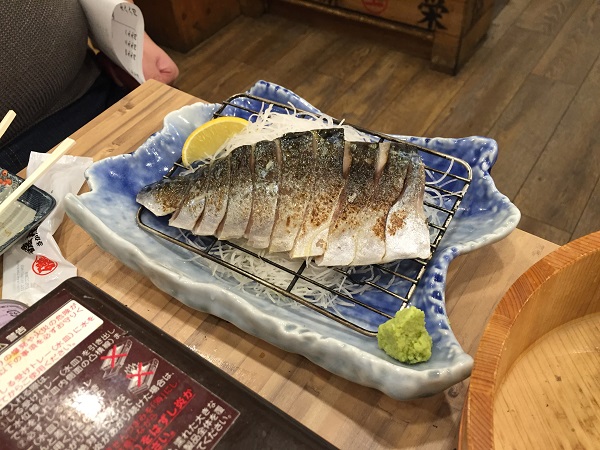 For my second ticket I told her about my adventure going out to Kumagaya to see Minyo Girls and Hayabusa on Saturday. She remembered that Kumagaya was Nittoh Mall, and asked who I shook hands with. She laughed when I told her that I only shook hands with Minyo Girls. Finally, for my last ticket I mentioned that it was finally my last day of vacation, and that I would be heading back to school on Monday. I told her the classes I was taking, although in the moment I forgot the word for “culture,” so I described the class as the study of Japanese people, LOL. She said my Japanese was getting to be very good, to which I responded “Chotto….” I wasn’t feeling too confident in that moment, especially after that interaction with the Shinseido dude.

Wasamin will be resuming her promotional tour over the next two weekends with three events in Chiba. I won’t be able to make the first two, but I may be able to make the last one. We’ll see. But after that, it will be Wasamin’s big concert at Ebisu Garden Hall. Exciting!