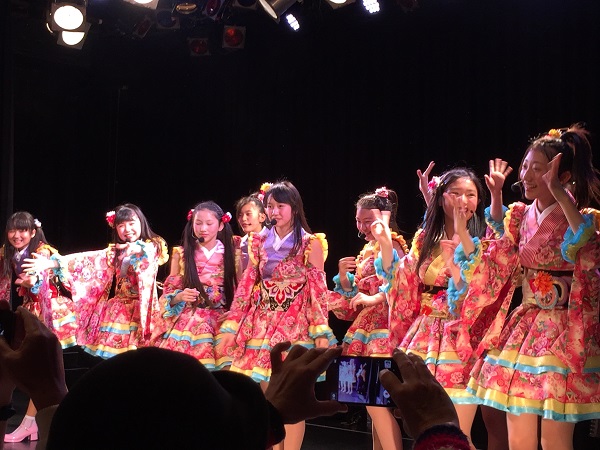 After seeing and having such a great time at their Vol. 2 Challenge Stage last Summer, I was really looking forward to attending Minyo Girls’ next big solo live. Needless to say, I wasn’t disappointed. This show was full of surprises. New songs, new members, and then the biggest surprise that happened after the show as I was leaving the venue.

Unfortunately I am just out of the picture, but you can see my penlight on the far left side of the pic

Yokohama O-Site is a short walk from Yokohama Station, right in the middle of a major shopping and entertainment area outside the West Exit. I didn’t get to the venue until shortly before doors were opened. I wasn’t sure if it was festival seating or not. I mean I did have a ticket, and it had a number on it, but it wasn’t clear if it was a seat number. Once I saw the seating chart I decided there was no need for me to be in queue, so I instead went to the goods booth. The two big items they were debuting were a group T-Shirt and a Hoodie. They both came in XL size, however Japanese XL’s are kinda hit and miss with me, so I decided to just pick up the T-shirt. Additionally, I picked up one of their CDs (a friend wanted it) and a presale ticket to their solo live in February. That would afford me three post-show 2-shot/group shot tickets. Anyway, I made it to my seat, and put on my Minyo gear, this time remembering to wear not only my Miyabi pins, but my Yuua pins as well. I was in the second row, but had the last seat on the far right, right in front of the speakers. 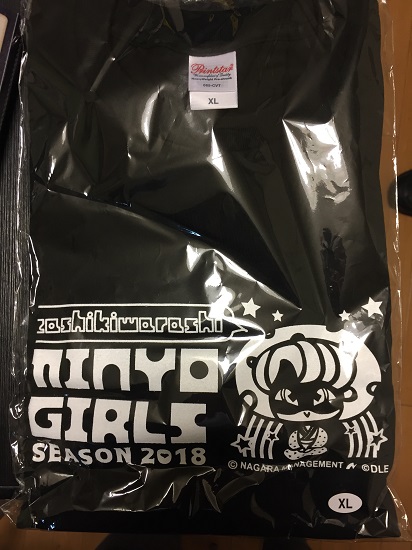 I still haven’t tried on the shirt yet, LOLZ

The setlist had a few of the songs from their new CD. However, they also debuted three new songs they had never performed before. The first one was an original song called Hankachi DROP. Later they performed two old traditional songs, Akita Ondo, which was awesome. I think it instantly became my favorite Minyo Girls song. It almost sounds like something BABYMETAL could perform. Finally, Kokiriko Bushi, which they have released on video…

I hope they release more videos from the show, especially Akita Ondo!

As usual for the Minyo’s, they did have a photo-op portion of the show (much like Wasamin’s) Unfortunately for me, my seat was not very advantageous for photos, and I ended up trashing a whole bunch for being too blurry. However, I did get a few good shots in… 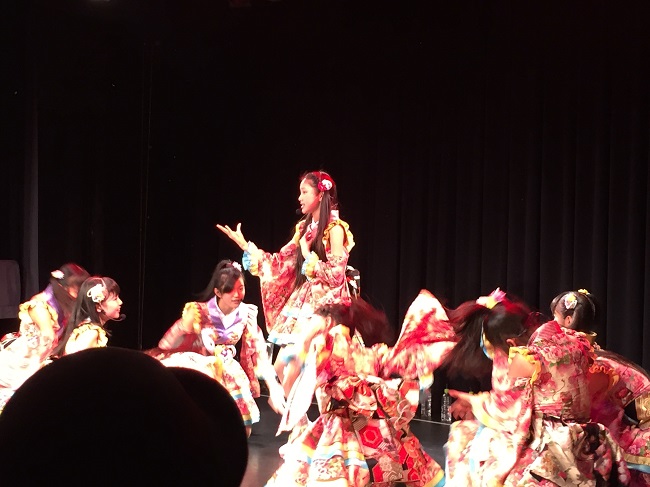 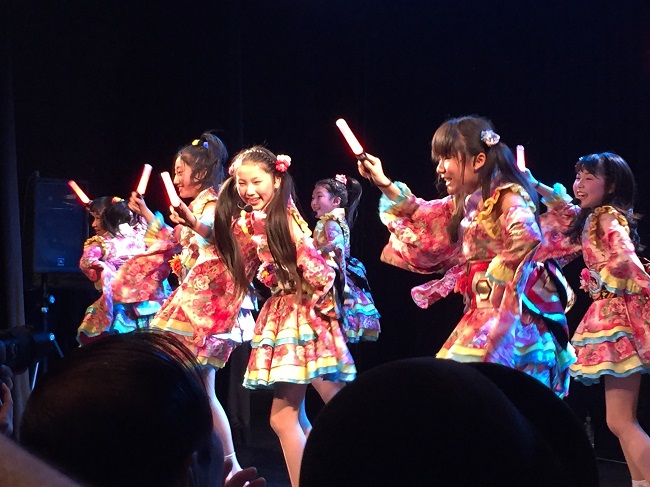 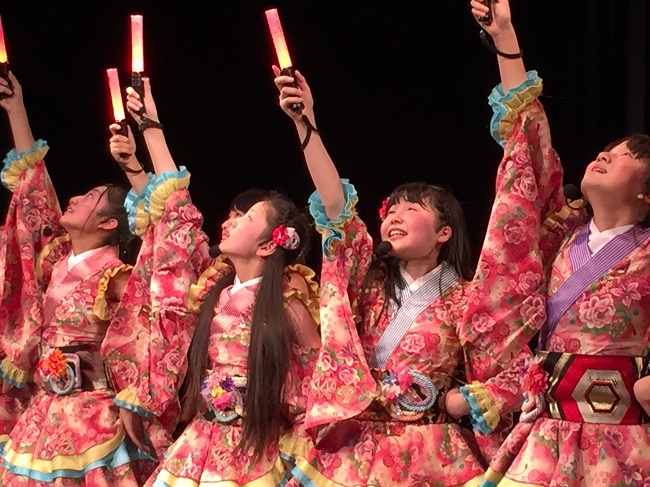 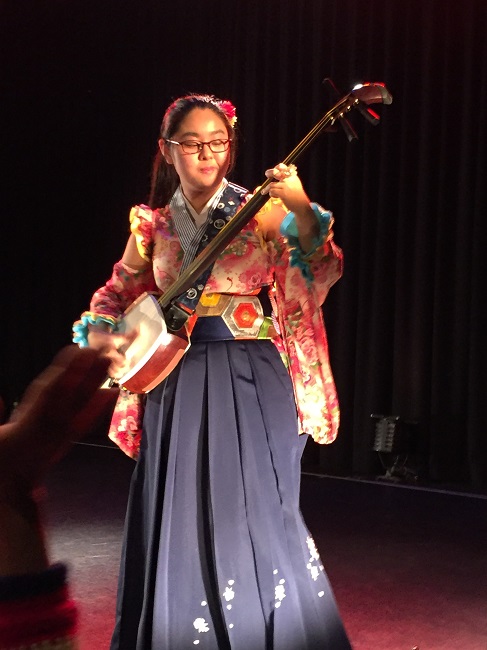 Miki and her Shamisen

However, the biggest surprise was when they introduced their new “kenkyuusei” member, Rina-chan. Interestingly, Rina-chan looks like she might be in the upper-half of the group, age-wise. They haven’t added her to the official site yet, so I’m not sure. But I am guessing that performing ability is a major factor in her selection since pretty much every member is a decent singer. 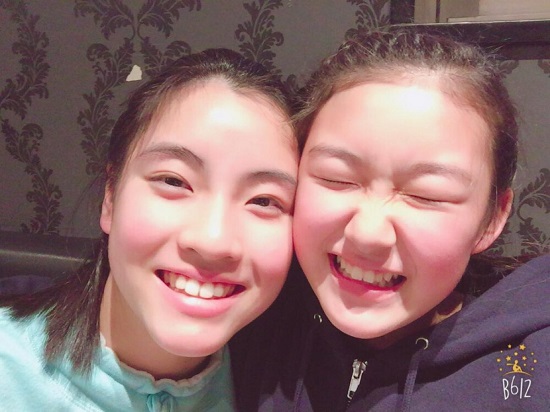 After enjoying my prerequisite 600 yen cola, I went back into the venue to line up for photos. I wasn’t sure why there were two separate queues, but once the event started, I realized the shorter queue was for group shots. Since I usually do group shots with this group, I switched over to that queue. 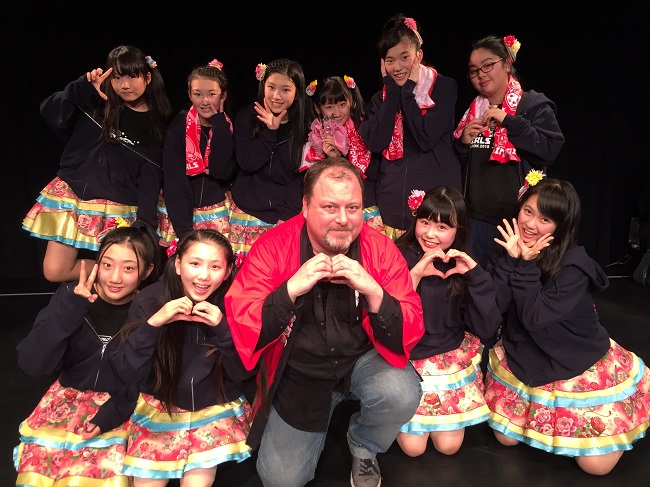 Have my two favorite members flanking me, and Yutori has her doll again, this time on top of my head.

I was kinda hoping Rina-chan would be in the group shot as well, but they had her helping with the sales table. In any case, the single-member cheki queue had grown considerably, so there was a bit of a wait. When my turn came I chose Miyabi, and she was very thankful. I confirmed that they sang three new songs in the setlist, and told her that she performed really well. At the end, she gave me a big “Thank You CK-San!” This would become very funny later on. 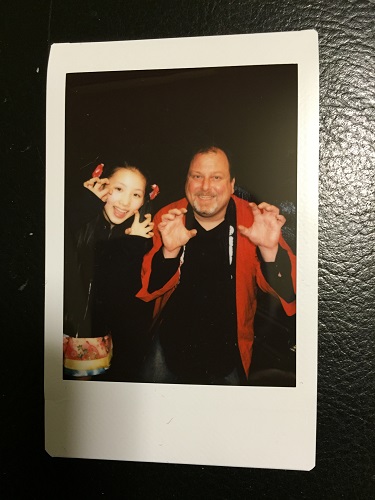 After the cheki I went back to the sales booth because I really wanted to take a cheki with Yuua as well. I still hadn’t purchased a ticket for their March Solo Live, so perfect. I bought the March ticket, and am now covered for the Minyo’s over the next two months. I could take another cheki too. 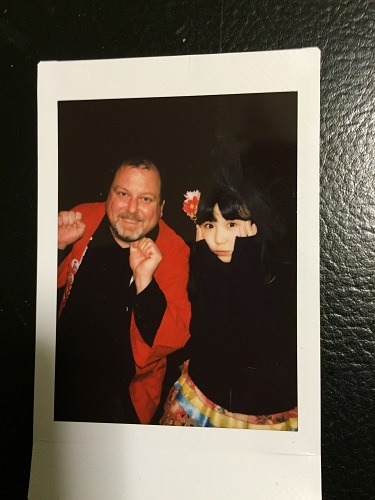 Yuua is such a sweetheart, although she isn’t quite as conversational during chekis. It is sorta surprising since she (and Fuuka) are essentially the main MCs of the group. I did manage to tell her that I love their new MV. Anyway, I didn’t want to spend any more cash, so I changed out of my Happi, gathered my things, and headed for the exit. It was at this point the most interesting thing happened…… 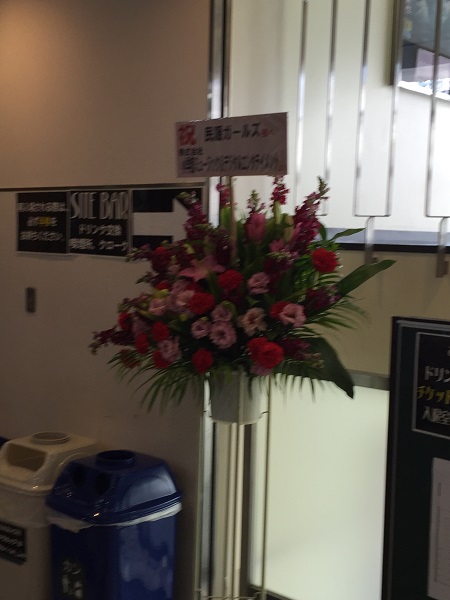 A woman was waiting for me at the exit. As I stepped out she said Hello, and asked me my name. she then introduced herself, as Yuua’s mother. She was standing there with Yuua’s Dad and younger sister and they were thanking me profusely for supporting Minyo Girls. We talked for a few minutes; she was asking me about what I was doing in Japan, and how I came to know the group. Her English was quite good (she said she takes lessons) I was about to leave, and she tells me to follow her…. 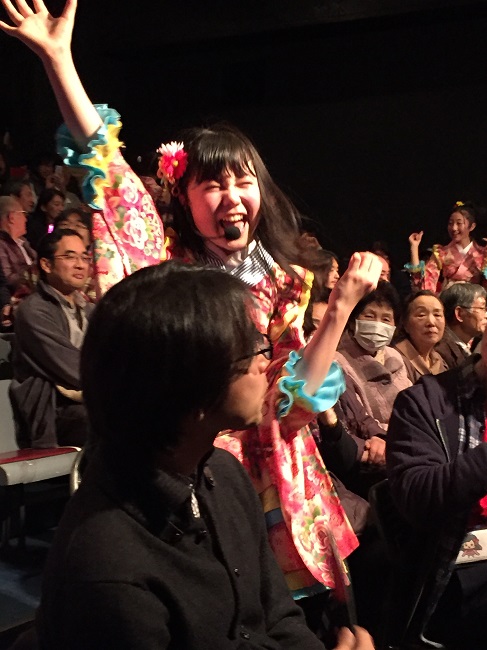 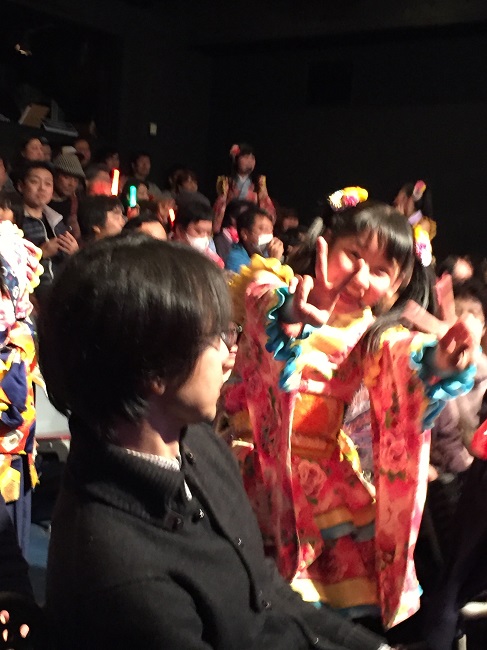 Yutori stopped, like “Hey, I’m posing for you, take a shot!” and I blurred the pic.

She takes me over to this group of women standing by the staircase and intruduces me to them in Japanese. Just then, the first woman says “Is this CK-San?” Hahahahaha!!!! I know exactly who this is. Like mother, like daughter, she was Miyabi’s mom. I told her the story about how Miyabi surprised me the first time she started calling me “CK-San.” The other two were Fuuka and Izumi’s mothers, along with Fuuka’s younger sister. It was just incredible to be invited into this little pow-wow with the parents of the members. I mean I have met Wasamin’s parents before, and once met Himeri from DISDOL’s (and former Alice Project) mother, but never on the level of this. It was pretty neat, and I have a feeling I will be talking to them more in the future. 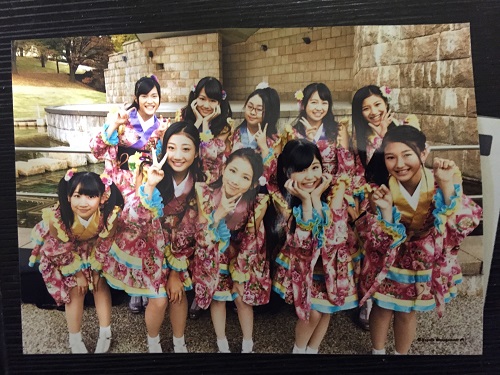 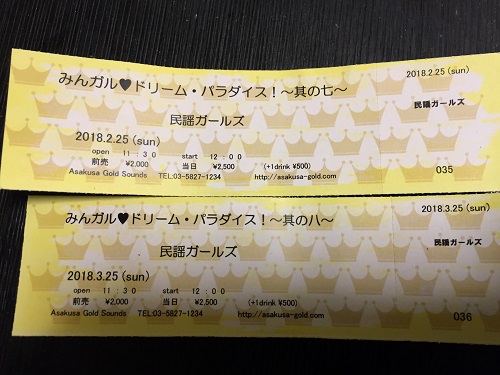 After a few minutes I bid my farewell and headed downstairs to find lunch.  But yeah, quite a neat experience overall, eh?  Minyo Girls are definitely a group that is demanding more attention in the idol world, so I invite you all to really check them out!