I had been worried about how this day would unfold ever since I realized the quandary I was in….

It all started back when the 50th Single Chara-Ani preorder was in its initial stages. It was the third round of applications, and I was trying to decide which days I wanted to attend. I knew I could not go to the February 4th event since it conflicted with Wasamin’s big concert. However, Wasamin usually doesn’t do an event the day before her big show since she needs to rehearse. So I decided to start putting in applications for the February 3rd event…

Unfortunately for me, around the day of the third round results, I received a mailer from the Wasamin fan club with a description of the “Ichigo Seat” benefits. (Ichigo Seat is kind of a VIP package, with guaranteed seat in the first few rows and other benefits and events) To my surprise, this time they were holding the “Ichigo” events on the 3rd instead of the day of the show. This meant that I really couldn’t go the the AKB handshake event on the 3rd, except I had already won four tickets. Shoot!

Ultimately I decided to only apply for “Ichigo” for one of Wasamin’s two concerts, as this could clear part of my day to go to Yokohama and use my handshake tickets on someone, most likely as “oshi-mashi” tickets as I didn’t know the time of my Wasamin events until a week and a half ago. So it was decided…sort of. I wouldn’t decide until the morning of the events if I would go to Yokohama before the Wasamin party, or afterwards…

If I went early, I could use two of my four tickets as scheduled, for Zunchan and Maichan. Among my early oshi-mashi candidates were Hidaka Yuzuki and Mio. If I went late, I could possibly make it in time to use my Akiyoshi ticket, and then oshi-mashi my other three tickets on Kaotan, Lemon, or maybe Chori. Ultimately I decided to go with the later schedule since Akiyoshi and Kaotan are my personal “2-top” 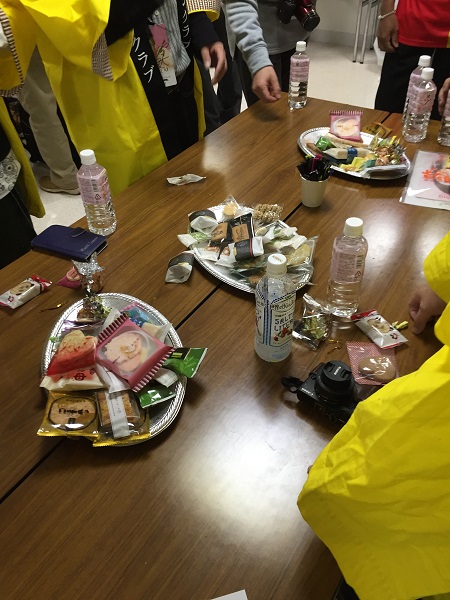 The snacks were kinda picked over at this point

The Wasamin Pre-Concert Party was set up similarly to the party they held on the third concert, except that it was being held in some random church just a stone’s throw from the entrance to Yasukuni Shrine. I arrived shortly before doors opened, there was a smatteringn of Wasafans milling around outside the church. Eventually we were let in, checked in, given a bottle of Wasawater, and led down to a small conference room in the basement of the church. We ate little snacks and listened to Wasa CDs while we waited for the event to begin. Eventually they announced the event was about to start. They had us call out for Wasamin, and we are all staring at the door waiting for her to burst through it……

But we didn’t notice that there was a second, more discreet entrance on the other side of the room. So Wasamin comes bouncing into the room, and we are ALL staring in the opposite direction, LOLOL! She was like “I came in, and nobody is looking at me!” She started off by modeling her outfit for us, which she had sorta previewed on Twitter a few minutes earlier. We did our infamous “water toast,” and then there was a 30-minute interview and Q&A session. Most of the questions asked by the interviewer focused on her turning 23 years old. She also spoke quite a bit about the making of the new music video for Sado no Ondeko.

As for the Q&A, the first thing we wanted to know was what the official lightstick color was for the new single. Wasamin originally decided pink, but the fans didn’t think that really matched a song with an Oni in it. So it was ultimately suggested and decided by the fans that the 7th single official color is purple. Fans also asked her about her recent trip to Ueno Zoo, as well as what Lovetan got her for her birthday. But Wasamin explained that she actually hasn’t hung out with Aika for a while, so they haven’t had the chance to exchange gifts yet.

After that it was time for our promised 2-shots. This would also be my chance to give Wasamin her birthday present. I asked Ichikawa-san, her manager if it was okay to give her a gift today, and she said no problem. I always have trouble deciding what I want to give her. I settled on a gift box of soaps and bath salts from Lush Cosmetics. I had so much that I wanted to say to her, but since this was a 2-shot, and they seemed to be rushing people through, I didn’t really get a chance to say much. Just a quick happy birthday, that I would be giving her a new fan letter soon, and finally that I love the new PV. I also wanted to tell her that I think a Fan Club trip/event at Sado Island, where she filmed the PV, would be awesome. I guess I will save that for next time. She has plenty of events planned in the next 3-4 weeks, so there will be lots of time to chat. 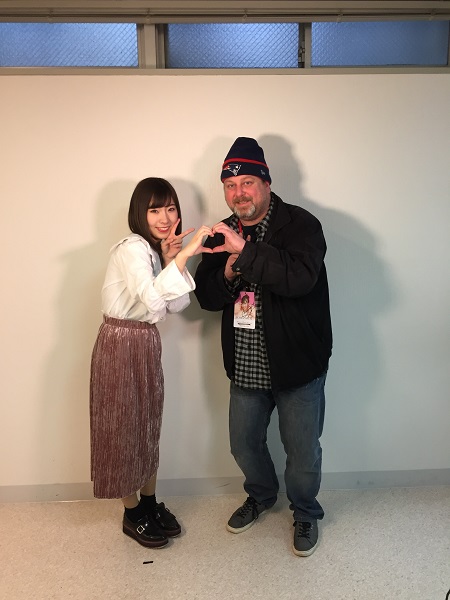 Anyway, I didn’t know if the event was over, and the line for 2-shots was still very long, so I decided to split and head to Yokohama. It was still early enough to make my Slot 6 ticket….

I was able to catch a limited-express train out to Yokohama, which got me to the event in record time. I hustled over to Pacifico, and since my tickets were already stamped in January I wouldn’t he to deal with that delay. I headed right over to Yuka-chan’s lane…

Akiyoshi Yuka (Lane 50) <2 tickets> I wouldn’t have time to visit any other lane this slot, so I decided to use two of my four tickets right here. The queue was going very slow since it was a signed photo slot. (which I lost) I finally made it to the front. I expected Yuka-chan to notice my Wasamin Ichigo badge, which I was still wearing, but instead she noticed my New England Patriots wool hat. I explained to her that it was an American Football Team, and that they were playing in the Super Bowl. She sounded as if she had heard of the Super Bowl, but not the team. In any case, I wanted to tell her that I saw the photos from her performance at Sasshi’s solo concert, and she looked cute and cool. 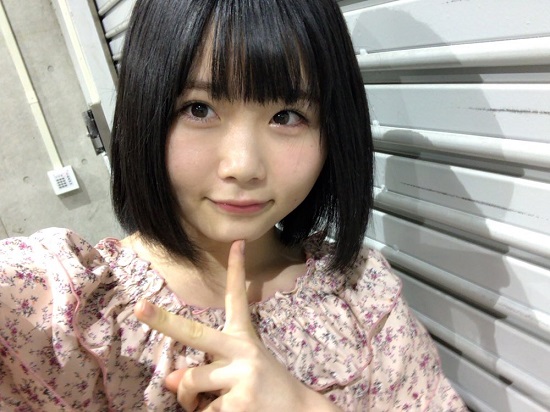 With that I went to dinner at Queen’s Square. I had almost 90 minutes until I could oshi-mashi my final two tickets in Slot 7. I knew I was using one on Kaotan, but I was still up in the air on the last ticket. Part of me wanted to use it on Lemon or Akiyoshi, but it isn’t too often I have oshi-mashi tickets. I like using them on someone I want to meet, or haven’t seen in a long time. With that spirit in mind….

Mutou Orin (Lane 102) At the last national event I shook hands with EVERY member of the 16th gen with the exception of Orin. Both Orin and Zunchan were excluded from the handshake event since they were on stage all day with Ijiri-san. But I did matome with Zunchan. I decided I would take the time to talk to Orin since she is one of the 16th gen I like, and I wanted to “complete the set,” in a matter of speaking…

I waited for the 30-minute mark so I could queue up, all the while watching my friend, and former Wasamin committee captain Okajiji-san circling her line. At about 6:59 people started jumping into the lane, so I ran in as quickly as I could and checked in. It wasn’t a long wait. Ultimately I told Orin that I had been to many 16th gen shows, and she always gives me such a great reaction at “high wave.” So I thanked her, just as I got pushed out. In the meantime, she pumped her fist and said “Yeahhh!!!” when I said that, so it was a successful meeting.

Matsumura Kaori (Lane 8) I had plenty of time to journey to the opposite end of the halls, and Kaotan’s queue wasn’t too long either, although the three guys in front of me all had 8-12 tickets. While I was standing in line the guy behind my gestured to my Patriots hat and asked if I was from Boston. I told him I had never been to Boston in my life, but I don’t really like any of the California teams. It turned out he had spent some time in Boston, and actually spoke pretty good English, so we chatted away about the Patriots, and our histories with AKB while we waited in line. It turned out this was his first time ever meeting Kaotan, and he asked what she was like. I told him how she used to be very feisty, but as she has gotten older she has become very sweet and caring toward her fans. He noted that she has gotten much cuter as she has gotten older. Finally it was my turn…

Of course I started by wishing her a happy birthday. I told her that I really wanted to apply for her Seitensai, but I had school that evening. Kaotan grabbed on to my Wasamin Ichigo badge, and said “Wasamin’s concert is this weekend, right?” She then confirmed that Wasamin is my Kami-oshimen, but asked if she is next in line. LOL, I said she was. In the mean time she made me wish her a big Happy Birthday in English. I said it once, but she wanted it louder. That got the entire queue laughing. 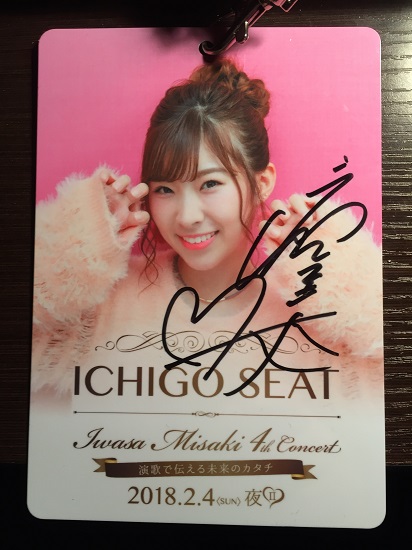 The front-side of my Ichigo Badge. It caught many eyes as I walked through the venue

I waited a minute to see how my new friend Shota’s handshake went. I saw him gesturing toward me, and Kaotan looking at me, but I don’t know what was said. In any case, he said it was an enjoyable experience, and she was really cute. With that I took my leave. I had a long journey home, and I was really thirsty.

I know I’m a bit late on this Wasamin concert report, but I promise I will get to it VERY soon!