The Nagara Group Enka Festival at NHK Hall, plus a couple of Wasa-News Updates 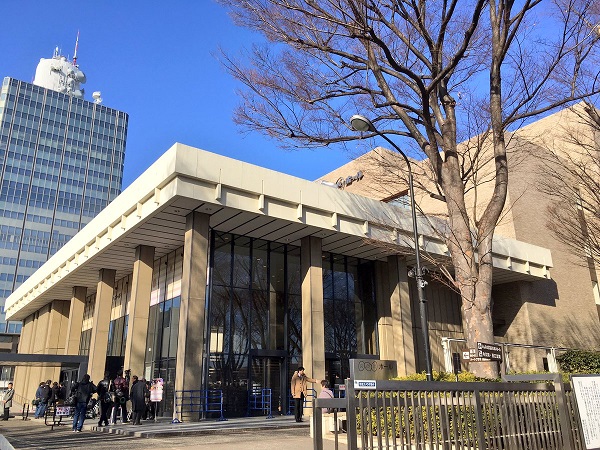 Today was the Tokyo leg of the Nagara Group Enka Festival. Earlier this week they performed in Nagoya, and two weeks from now they will be in Osaka. I will give a semi-brief experience review. But first, a few news items…

1. Wasamin will again be performing with Umezawa Fumio in a play/performance at the Meijiza Theater in Tokyo.
This is similar to the play she was in last Summer in Osaka. That play starred Umezawa, as well as Wasamin senpai Tegawa Toshimi. This time alongside Umezawa, Wasamin will also be sharing the stage with Enka artist Ken Naoko. The show will take place from 31 August through 25 September, and there will be special offers for Wasamin Fan Club members.

2. Wasamin confirmed today that Akimoto Yasushi composed and produced her 7th single.
I was wondering if Aki-P would be continuing his support of Wasamin’s Enka career. I guess I should have asked her at some point. But she confirmed it in today’s concert during the MC. Emcee Nishiyori Higashi remarked that it’s really nice that Akimoto has continued to support her post-graduation

3. MusicVoice article touts Wasamin’s versatility as a singer.
This is essentially a concert review from her Ebisu show two weeks ago. The writer notes Wasamin’s singing ability, and considers the possibility of Enka reinventing itself for a new generation…or something like that
http://www.musicvoice.jp/news/20180217087323/ (in Japanese)

I will keep this review somewhat brief. NagaraPro’s Enka Festival is a showcase for their top music talent, and stars heavyweights of the genre like Hikawa Kiyoshi, Mizumori Kaori, Tegawa Toshimi, and Yamakawa Yutaka, all of whom have appeared multiple times on NHK’s Kouhaku Uta Gassen. The show also features Wasamin, Hayabusa, Fujino Toshie, and Shiina Sakiko. Wasamin does spend considerable time on the stage, and did get the chance to sing her upcoming single, but the NagaraPro “Big Four” are definitely the stars of the show. On the other hand, it is really neat seeing Misaki-chan standing shoulder to shoulder with such big and important recording artists. 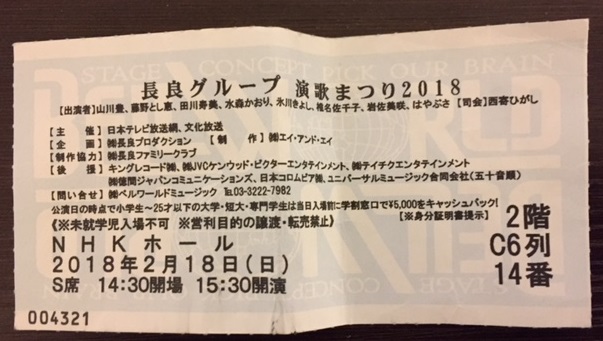 I originally debated whether I wanted to go at all. The tickets were quite expensive. 10,000 Yen for a seat on the floor or 1st balcony. 8,500 Yen for the Third Floor. However, they set up a special booth for tickets at Wasamin’s Love Live back in November, and you got to handpick your seat, so I went for it. I picked the perfect seat too. It was a “double aisle” seat, meaning I had an aisle in front of me and on the left of me. Given that the NagaraPro artists roam the venue during the show, this would be a great chance to see them up close.

Pre-show festivites, including a Wasa-handshake session. 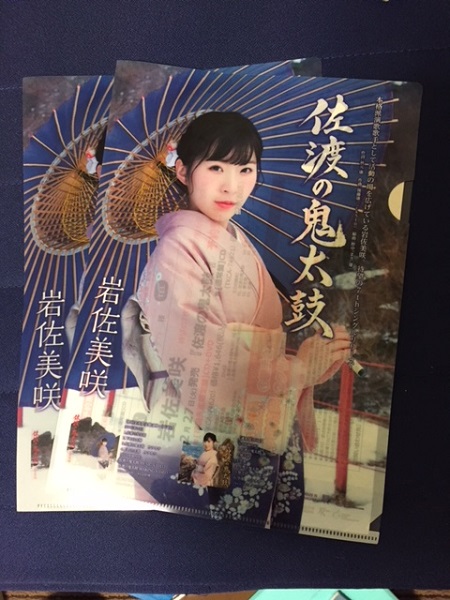 I was running late all day, but got to the venue just as doors opened. The queue to get in was really big, but didn’t take too long. I immediately headed to the goods booths. All of the artists sell CDs, DVDs and other stuff at the shows (In fact, Wasamin’s 4th concert goods were all there) Additionally, both Wasamin and Hayabusa do a pre-show handshake event. I was originally just gonna get one CD, but when I saw they were giving away Sado no Ondeko clear files, I bought a 2nd copy. As for the handshake, I used both tickets at once since they were running late and Wasamin was going to have to leave soon. “Chris-kun!” “Misaki-chan!” The first thing I noticed was that Wasamin was again wearing the green Kimono given to her by Toshimi-senpai. She asked if I liked it. Now she was standing right next to Hikaru from Hayabusa, so I told Wasamin that I was also looking forward to Hayabusa’s “Spider Man” song. (Kumoo no Dansu) Just then Hikaru turned to me and said “Yeah, Spiderman!” I mentioned that I saw him perform it in Saitama. Meanwhile, Wasamin was mildly amused at my interaction with Hayabusa. I turned back to her, leaned in close, clasped her hand in both of mine and told her to do her best. 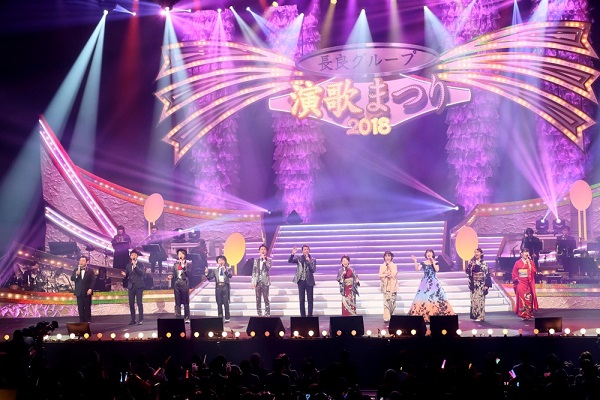 Part One (in brief)

The show actually started early, with one of NagaraPro’s new Enka performers on stage. Last year they did the same thing with Minyo Girls. I found my seat, which was a little higher than I expected, but still a great strategic spot. After introducing the performers, Kiyoshi lead off with his infamous Kiyoshi no Zundoko Bushi. The first half of the show mainly focused on the top four’s big hits. The rest of the performers sang in group songs. It was after the intermission that things got more interesting. By the way, I was kinda dozing off in parts of the show, so during the break I drank one of those Vitamin C Boosters AND a large black coffee. Needless to say I didn’t doze off again, LOL. 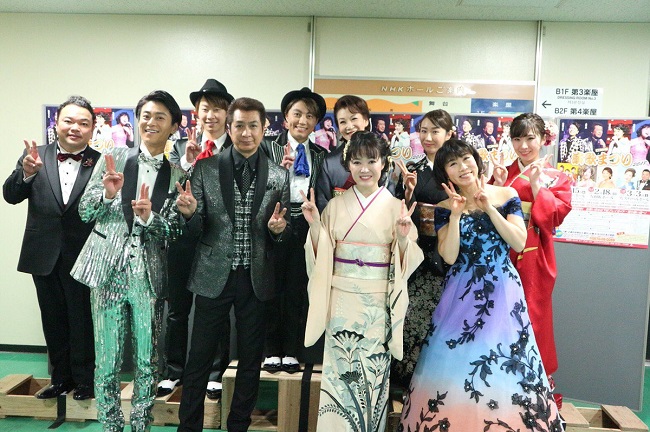 The second part of the show begins with a Nagara Group staple, all the performers roam the audience and shake hands with the fans for like a six song set. It is a lot of fun, and they always sing the Japanese version of “If You’re Happy and You Know It” We were all excited to see who we would get on the second floor, and all the obasans in my section gasped when they saw we had Kiyoshi. We also got Toshimi-san. After 3-4 songs, they all switch floors. Would I get Wasamin in the second part? Nope. Instead we got Mizumori and Hayabusa. Now remember I mentioned I was in the perfect spot for this portion of the show? Here were my experiences…

Hikawa Kiyoshi: It’s The Prince of Enka! Toshimi actually started off closer to me, but Kiyoshi made his way toward my section rather quickly. Oh my God!!! All the women go absolutely batshit for him. They are climbing all over each other to get close to him. He is flanked by like six guards who actually have to pull these women down, fight them off. It’s really funny to watch. They even get out of their seats (which they aren’t supposed to do) At one point I watched a guard jousting with this little old lady who was doing everything she could to run past him and get to Kiyoshi. Anyway, he passed right in front of me and immediately thrust his hand right toward me, so I shook his hand. He quickly glanced at me and smiled before getting mobbed by more obasans, LOL.

Tegawa Toshimi: I really like the sound of her voice! I always think of her as older, but she is actually the same age as Kiyoshi. Anyway, she finally made it to my section, and shook hands with the people on my left. After that she turned around to the people in front of me and passed me by. Oh rats! But then, she turned around and saw me. Her eyes got real wide, she waved and mouthed “hello” to me. Nice save!

Mizumori Kaori: This was the best interaction! I was really hoping she would come to me since I have always wanted to meet her. Mizumori is so cute, she is like a kid. It is astounding that she is almost the same age as me. She came across my section, and like Toshimi-san she shook hands with the people to my right, and then turned around and focused on the rows in front of me. Rats, I got skipped again! Or so I thought. Eventually she turned around and saw the two Wasamin fans sitting across from me. She motioned toward their Wasa-Happi coats and gave them a thumbs up, and out of the corner of her eye she saw me. It was like her jaw hit the floor. She came running straight toward me, grabbed my hand, said Hello, and Thank You! Her smile is so beautiful too. Just awesome!!!

Hayabusa: Unfortunately never came by me during the show. Both Hikaru and Yamato got close, but then the last song ended. That’s okay, since I have met both of them before, and talked to Hikaru before the show. Wasamin and Yamakawa Yutaka didn’t come to the 2nd floor, but I have met Yutaka-san before, and Wasamin, well….

After a couple of long MCs, all the members got to perform their new and/or upcoming singles. It was great to hear Wasamin belt out Sado no Ondeko on such a big stage. She did a great job! They had a Taiko drummer in the live band, and he actually sounded better than the Taiko on the recorded version of the song. I do like Hayabusa’s new single too. Actually, it seems that pretty much all of them have new releases coming out in the next month or two. Overall it was a really nice show, but I think the real fun happens after the intermission. The part in the audience is pretty much what everyone waits for. I enjoy the Nagara Group shows, but it isn’t the type of concert I could sit through more than once. That said…

Nagara Pro also has a special “Ward Concert” that they do every year, and this year happens to be the Ward I live in. In fact, I could almost walk to the venue, although I will probably jump on the train. That’s coming up in April. And of course the big push for the new single begins next weekend. So a lot of Wasafun coming up.