Yeah, I knew this would end up being a crazy day. For Wasamin’s release week, she performed in a few ‘off the beaten path’ areas on the outskirts of the Kanto District. The final event was no exception, out in the burbs of Western Tokyo. For me it was about an hour ride, and then about a 15-minute walk to the mall. I got there relatively early, but the place was already bustling.

Wasafans have made a tradition of doing one last big push on the final day. There were two performances, each followed by a handshake/2-shot event. The last event went for over three hours. There were a few fans with over a hundred tickets. Personally, I considered leaving since I did have work to do, and I was really tired, but I held on to the end. Here is the early setlist…

Wasamin was again wearing her new, personally designed Kimono, which you can see in the two shamekai. BTW, I was sporting my newly signed Wasa-Happi coat, as well as an Oni mask I picked up in Asakusa last week. I managed to get quite a few laughs from the fans AND the passing locals. I purchased five copies, leaving the option to purchase more later if I wanted to. If I wanted to do a shamekai, it would cost two tickets. A handshake was one ticket, and they were doing the special prize giveaway. For my first handshake, I chose the shamekai… 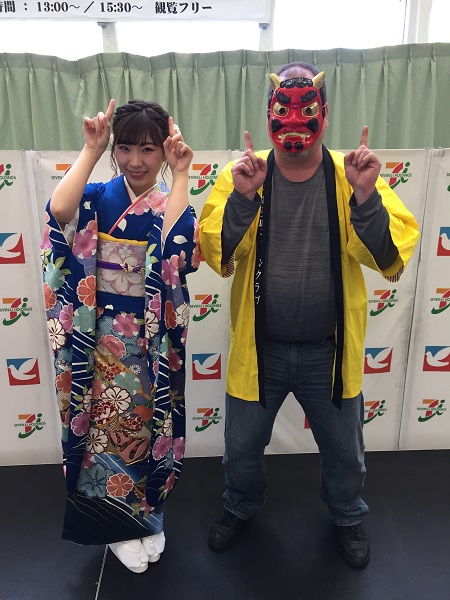 I’m actually not the first person to bring an Oni mask to the event. I couple fans brought them during the preorder events. But since I brought it, I figured I had to use it in the photo, right? Wasamin asked me where I got it, and when I bought it. I explained to her that I picked it up when I went to get my CDs from Yoro-do.

After my handshake, I drew two tickets. They were both losers. However, if you had 10 losing draws, you could get a Wasamin pin. I had eight so far, and I had three handshake tickets left. If I got two losing tickets out of those, I would get a pin. However, I was saving my three tickets for the late event. In the meantime, I grabbed some Tempura and cold Udon for lunch.

I was able to nab a front and enter seat for the late performance, so I had a nice view. Sasou-san was taking photos of the audience, so I kept my Oni mask on for much of the performance. However, I didn’t want to make Wasamin laugh. She smiled at me a few times.

I waited a little bit to queue up in the handshake line. For this 2-shot, I decided we could hold up my Happi coat. Most fans who get their coats signed do a ‘signed Happi’ shamekai, and some do it the way I do it. Others do it with their back to the camera. 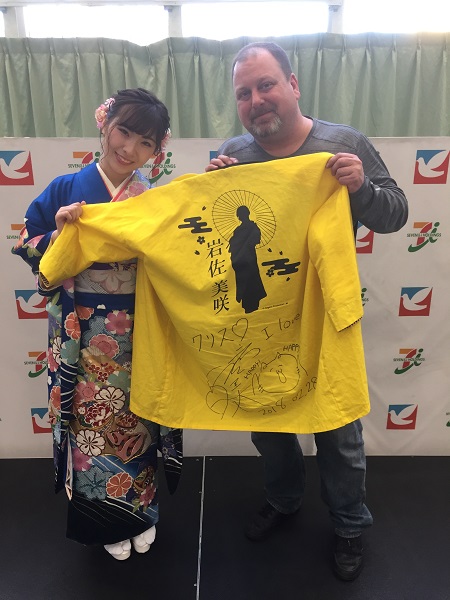 After the photo, I asked Wasamin if she noticed my hair. She was like “What, huh??” In the meantime, Wasamin’s manager is totally acknowledging my haircut. I finally pointed to my head, and said “Kami???” “Doko???” She burst out laughing at that. I can’t believe she didn’t notice that I buzzed most of my hair off, LOL. And of course I got to draw two more tickets. Hey Hey!!! A winner… 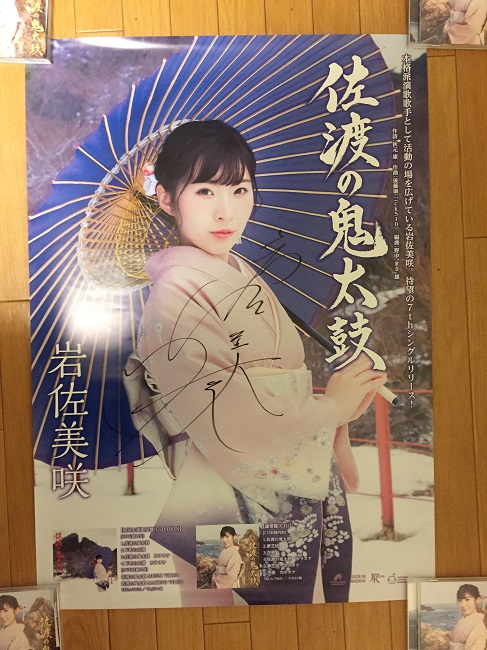 I got the autographed poster, which I was extremely happy about. The only other prize that I would really want aside from the two I had won this week was the signed CD. I had one ticket left. I had decided that if I didn’t win a prize, it would be my last ticket. If I did win a prize, I would purchase another CD. Eventually I queued up. I decided to talk to Wasamin about the DVD portion of the single, which I had watched over the weekend.

I told Wasamin that I enjoyed it, and I would love to eat at that restaurant. I lost the last draw, which meant I had enough to get one of the Wasamin pins. The one I draw isn’t a photo of her, but a drawing she did of an elephant, LOL. Since I got my pin, I decided that was enough for today. What I didn’t know was that the handshake event would go on for another two hours or so. I contemplated getting more tickets, but ultimately just ended up watching people circle the queue. And it was a good thing that I stayed, since one of the fans reminded me that the deadline to send in the postcards for the single prizes is Tuesday. I thought it was mid-month. So I spent most of this evening filling out postcards so I can get them in the post box by tomorrow. The Grand Prize is a BBQ Party, 2nd Prize is the Karaoke Party, and the 3rd Prize is a personalized and signed poster. I already have a signed poster, and last year’s BBQ Party was awesome. So I put most of my tickets in for that, and a few for the Karaoke party, just in case.

And that was it. A group of us headed to Saizeriya for a post-show dinner, before heading back to Central Tokyo. The next event is next weekend in Kanagawa Prefecture, and then the following weekend in Saitama. Hopefully Wasamin will get a little break in the next two weeks.

Oh, and Sado no Ondeko has been hovering around the 10th Spot on Oricon for the entire week, so I am guessing we will see a Top 10 finish for the week. What I am really interested in is how the single fared compared to her previous releases.