So this is essentially a report about Wasamin’s Event in Kanagawa Prefecture today.  But first, last month I wrote a post about Wasamin’s pre-concert party, where I mentioned giving her a birthday gift…

“After that it was time for our promised 2-shots. This would also be my chance to give Wasamin her birthday present. I asked Ichikawa-san, her manager if it was okay to give her a gift today, and she said no problem. I always have trouble deciding what I want to give her. I settled on a gift box of soaps and bath salts from Lush Cosmetics.”

And the other day Wasamin tweeted this… 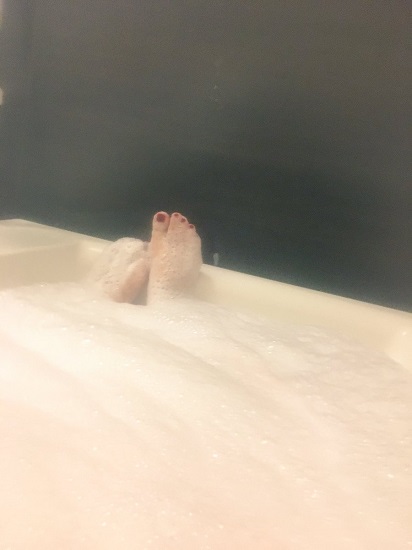 Wasamin tweeting about using bubble bath and bath salts she received as a gift. Could it be???

In all honesty, bath salts are a popular gift, and LUSH is a popular place to buy gifts since they create very nice gift boxes.. That said, I’d like to believe that is my present she is using. I know she likes LUSH products since she has mentioned it in the past. I’m debating about asking her.

It’s funny though. A few years ago I gave her this big brown scarf/shawl as a gift. And I have occasionally seen her post photos with her wearing something very similar. I have always wondered if it was the scarf I gave her.

Anyway, on with the performance….

One week after the big push for the new single, Wasamin was back at it with an event out in Kanagawa Prefecture, not too far from Atsugi Airbase. In fact, going to Ebina brings back memories, since this is also the town where Wasamin had her Christmas Eve Dinner Show back in 2016. Such an awesome memory.

I debated whether I wanted to trek all the way out to this event. But I really have nothing else to do this weekend, so I decided to go for it. I got to Ebina 90 minutes early, with the idea that I would enjoy a nice lunch before the event. However, I often run into this problem any time I go to a huge mall in a relatively small town. It seems like the entire city population heads to the mall on the weekend, which makes the mall insanely crowded. Moreover, it is nearly impossible to get a table anywhere. In the restaurants, in the food court, it is insane. I took a number at the Kaitenzushi, and after waiting 40 minutes I gave up. I ultimately had a Subway Sub for lunch, and even that restaurant was packed!

The event was actually being held inside the small music shop in the mall, Vanda Records. I had never heard of this chain before. They seem to have a lot of shops in Hokkaido. They had a stage setup just inside the entrance, with a few chairs and a small standing area. However, a lot of people watched the event from outside the shop, since like most mall shops it had an open front. I was in the standing section for both events, sporting my Wasa-Happi. Here are the setlists…

Wow, I don’t remember the last time we heard Wasamin perform Akai Sweet Pea. According to Wasamin, it was by request of her manager. Also, it seems as if Wasamin likes to perform Blue Light Yokohama whenever she’s in Kanagawa Prefecture, for obvious reasons. She was once again wearing her new Blue Happi Coat, which she has pretty much worn consistently throughout the 7th single campaign. She also spent some time promoting that television show she did with Mizumori Kaori, which I guess will be broadcast relatively soon.

They were still offering the 2-shot if you used two tickets. I had a total of three for the two events, so I decided to do the 2-shot early… 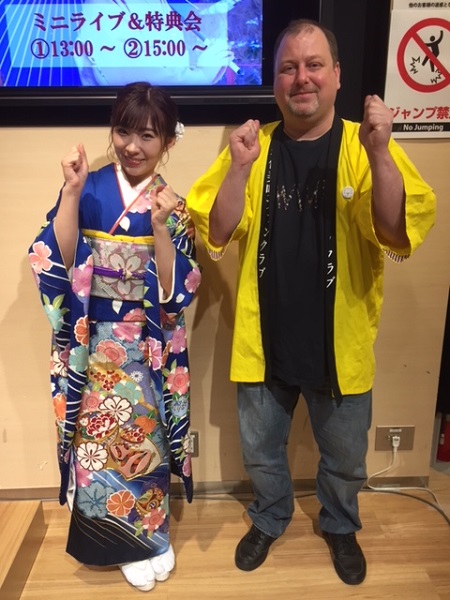 They gave me a little extra time to talk with Wasamin, so I discussed her SHOWROOM from the previous evening. Actually, I only watched half of it, but I saw when she did a drawing of an Oni. I told her my favorite was the Oni’s surf shorts, and I called him “Surfing Oni,” which got a laugh. 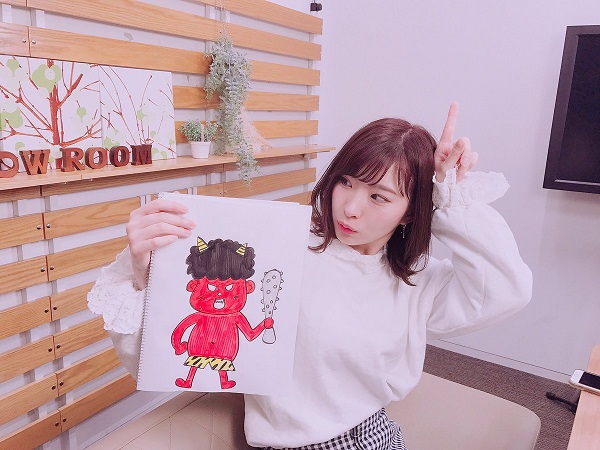 In-between performances I hung out in the Tully’s, one of the few places you could find a seat. I also did a little shopping. And since White Day is coming up, I decided to pick something up for Wasamin. I found this cute little set of gourmet cakes, which looked good. I also bought a smaller set for myself, and they are very tasty. Anyway, I was excited to have a gift for Wasamin…

It was odd, when the 2nd handshake event started, nobody seemed to want to line up. So after two people, the line was completely empty. Heck, I’ll go! So I went up with my present, and wished Wasamin a happy “White Day” I asked her if this was the correct custom, and she asked “Do they have White Day in California?” To which I replied “No, just Valentine’s Day.” So she asked me what you give on Valentines, and I said flowers or Chocolate. But I pointed out that my gift was cake. I’m sure she will enjoy it. I liked mine.

So it was nice to spend a Saturday afternoon with Wasamin. She has another event next Saturday as well in Saitama. I’m debating whether or not I want to go. It’s actually not far from my apartment, train-wise. But it is one of those malls that isn’t close to the train station, so you have to find a bus or taxi to ultimately get there. So we’ll see.