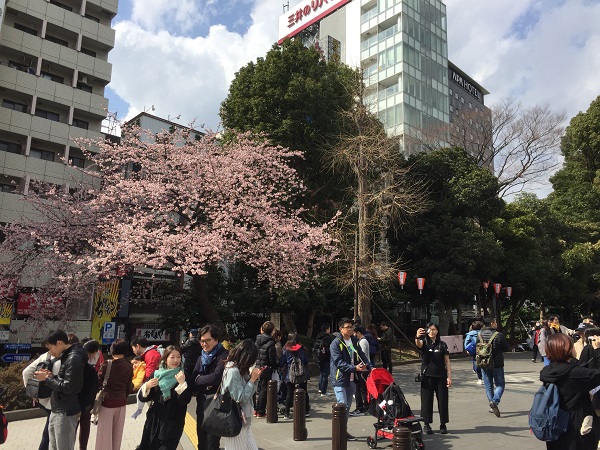 On Sunday my plan was to head to Asakusa and Higashi-Jujo to finally pick up my last two preorders of Wasamin’s new single. I got sidetracked, since I was passing through Ueno. I decided to take a walk through Ueno Park to check out how the Sakura were blooming, and to see if the food stalls were open yet. Most of the trees were bare, but some of the food stalls were open. 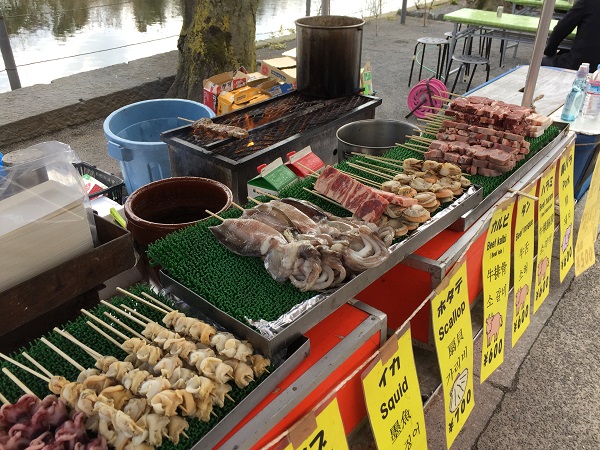 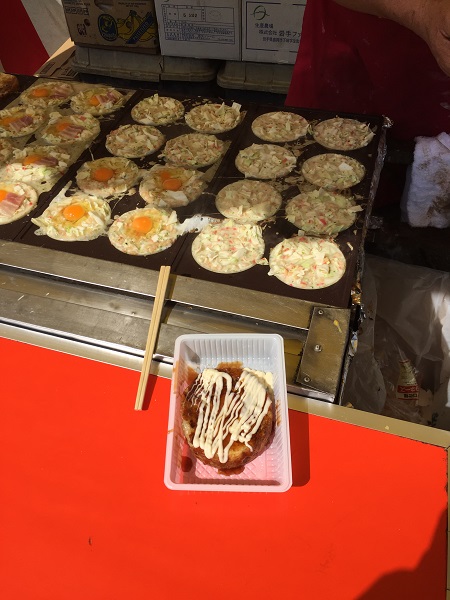 SCORE! So for lunch I had grilled beef kalbi, grilled squid, and a small okonomiyaki. After that I continued to Asakusa… 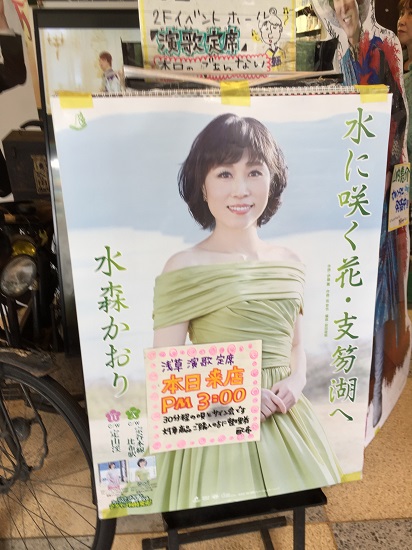 When I got to Yoro-do, the music shop Wasamin often performs in, I noticed a small crowd hanging out outside. I checked the sign. Mizumori Kaori, Wasamin’s senpai, was appearing. Well, since I was in the neighborhood anyway, I decided to buy a CD for the event. However, the shopkeeper informed me I could get a 2-shot if I preordered two copies. What the heck, I’ll go for it. 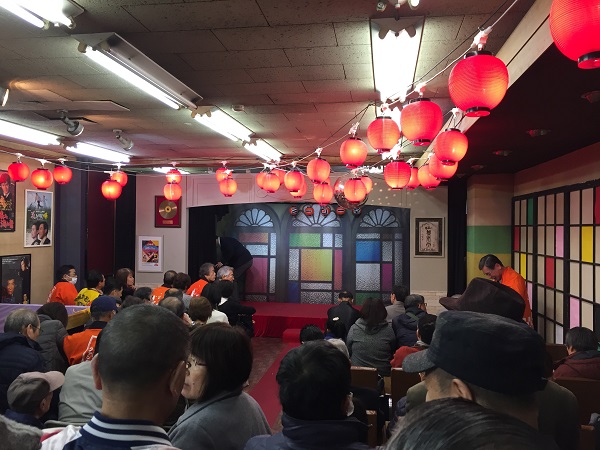 I had reservation #71, which meant I would surely be standing in the back. And to be honest, most of her fans or of the geriatric set, so I would feel kinda bad taking a seat anyway. By the way, Yoro-do has completely redecorated their performance venue. It looks really nice, and I LOVE the vintage movie posters framed on the walls! 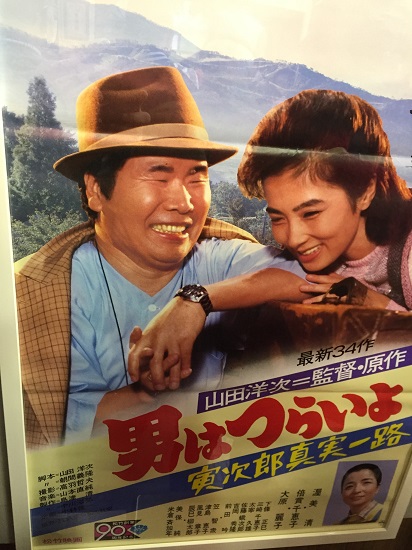 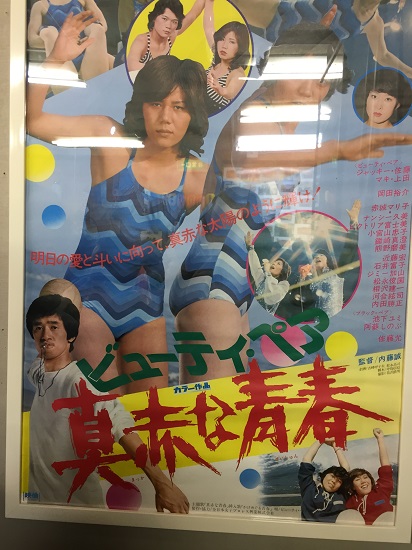 It was a fun little event. It wasn’t very long, and she only sang one song (the new single) And of course, being the one foreigner in the audience, Kaori-chan made a big deal out of my presence. Since there was a very big crowd, they decided to shorten the live, and get to the 2-shots.

I was in the back of the venue, so I was one of the last people to go. She greeted me, and I reminded her of the interaction we had at NHK Hall last month. She immediately lit up. She remembered what I was wearing, where I was sitting, and then she told me afterwards when she went backstage she mentioned to Wasamin that she met her foreign fan, LOL. 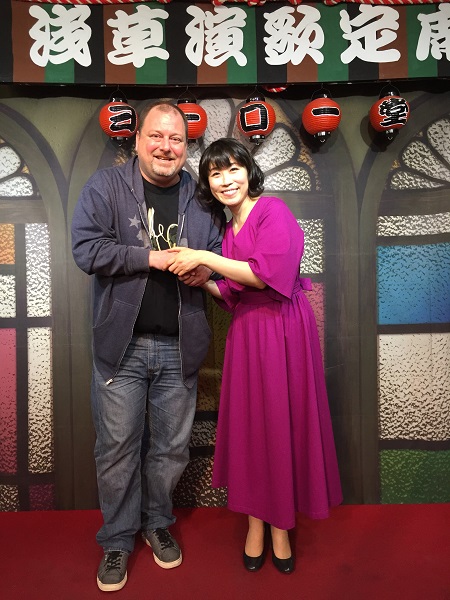 Come to think of it, I think Wasamin was trying to tell me that at one of her release events, and I didn’t understand what she was saying. LOL.

Anyway, when I told her I lived in Itabashi, she asked if I was coming to the Nagara Pro show in my neighborhood. When I said yes, she said she would see me there! LOL. I have mentioned before that Mizumori-san (I remembered to call her that) is like a big kid during lives, and she is no different in person. After that I left to go to Higashi-Jujo… 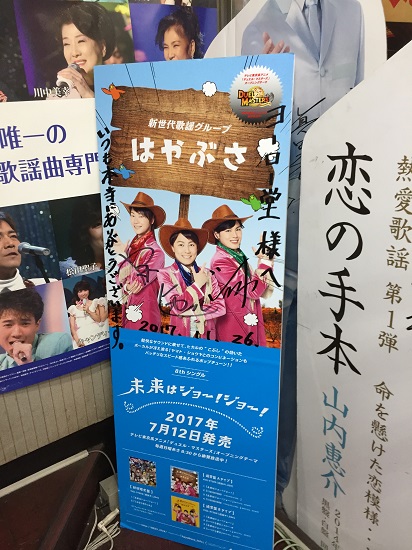 When I arrived a Higashi-Jujo to finally pick up my last Wasa-package, they were also holding a live event. LOL, it was Hayabusa! I was running into NagaraPro acts all over town. It was their last of three events that day. The shop owner asked if I wanted to go into the event, but it was already half-over, I didn’t feel like purchasing any more CDs that day, and of course, I am more into the female performers. Although if it had not started yet, or was just beginning, I probably would have gone in.

Anyway, quite an interesting Sunday. And to make sure this involves Wasamin properly, here’s a picture of her autographed signboard at Yoro-do… 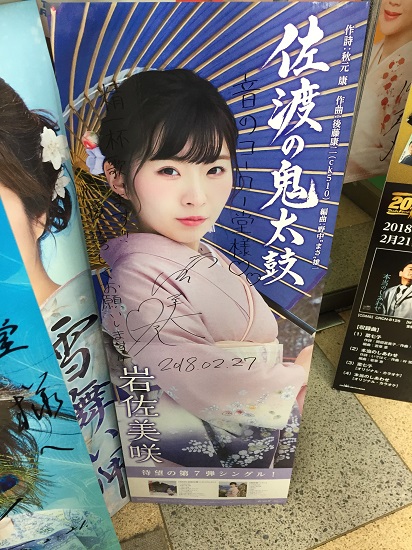