With the pending graduations of Yuna-chan, Koto, and Miki looming, I decided to go and see FES☆TIVE one last time in their current formation, especially since I won’t be able to see their graduation stage this coming weekend. Since my friend Anthony is a fan of both Yuna and Kotone, I invited him along.

According to their official blog, they were expecting an unusually large crowd, and highly recommended making a reservation, which I did. Although it seemed for the most part like the usual crowd size at Twin Box. If you have been to that venue before, it is tiny and cramped, even more so than Twin Box Garage upstairs. A had a couple of cocktails at The HUB before heading to the venue. Not to mention I have a bunch of Twin Box drink tickets leftover from previous shows. I thought I would be able to spend a few of them, but when I told my friend he handed me a few more, since according to him he never uses them, LOL. I guess I need to there one night and just drink!

I was trying to decide who I wanted to purchase cheki tickets for. Of course I would be getting a Hinarin ticket, that was a given. I thought I might want to meet with one of the pending grads, but I have skipped seeing Hiyo-chan the last two events I have attended, and she’s my #2 girl in this group. I would hate to skip over her for someone else, so I got a second ticket for Hiyo.

It was your usual Twin Box live. Loud, lots of fans going wild. My friend and I stayed in the back because he has some sort of inner-ear issue, and didn’t want to be close to the speakers. That’s fine, I’ll get less sweaty that way. They opened with some 3-nin unit I wasn’t familiar with Hinarin, Koto and Yuna. The song was really good though. When I hear a song I’m not familiar with, I always assume it is from their album, which I have never purchased. In fact, they did a few unit songs during the main part of the show as well. There was one song in particular that I liked, something “Nichiyoubi.” But I couldn’t find it on any of their tracklists.

All three of the graduating members looked really loose and carefree on stage, in a good way. Kotone was really getting into the performance, working the crowd. It’s interesting, I really like Kotone a lot, although for some reason I have never really clicked with her at handshakes. But tonight I had my eyes on her for much of the show, almost as much as Hinarin. They referenced the fact many times that this was the last Twin Box performance for the three members, and during the last song Piano started sobbing uncontrollably. It was a cute moment. 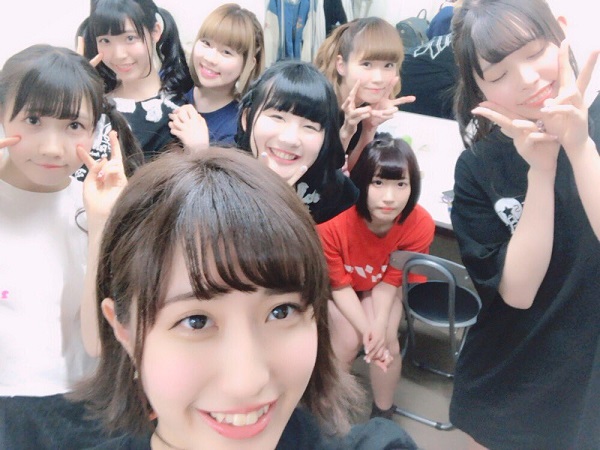 It was the usual clusterf**k setting up for handshakes. I usually run for Hinarin’s lane right off the bat since it usually gets very long very quickly. However, I was slightly confused since some of the signs were different, and I couldn’t tell where her line was. Moreover, the two HUGE queues didn’t seem to be hers. Finally, I found this extremely short queue with just 3 girls in it. This was Hinarin’s lane? What happened??? I’m hoping it was for the graduation since the lines for Kotone and Yuna-chan were huge. I wish I could say the same for Miki’s queue, but alas… Anyway, I was 4th in line for Hinarin, so I made it to her fairly quickly. I had planned on what to talk to her about, but they took our cheki quickly, so I got thrown off explaining the pose we did (It’s supposed to be the dance move from their last single) She laughed when I said that, like “Oh yeah!” She then mentioned that she could see me all the way in the back, and thanked me for bringing a bunch of orange glowsticks. (I don’t bring them all the time) I was basically apologizing for not seeing her in a while, neglecting to mention I skipped her birthday show. When I said the last time I saw her was at Tower Shibuya, she remembered. “That’s right, that was the last time” But I told her I really wanted to see everyone one more time before the group changed. My time was up, and it was time for me to go visit Hiyo-chan.

BTW, Hiyo-chan was once again waving to me while I was in Hinarin’s queue. I was really happy I had a ticket for her this time, since she remains cool with me even if when I don’t have a ticket for her. While I was waiting for Hiyo, Saria started smiling and waving to me. That was a first. I am used to Miki and Piano doing that, but not Saria. I was at the front of the queue fairly quickly. Interestingly, Hiyo-chan remembers that I take Japanese classes, and was asking me how it was going. I told her I go three times a week, and am also studying Japanese history. It was right in the middle of this conversation when the camera showed up. In fact I didn’t even remember taking the shot, LOL. Hiyo-chan said my Japanese was improving, and wished me luck. 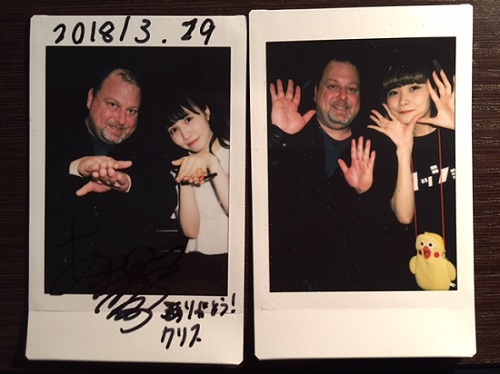 My friend was just using his first ticket, but I was done, and itching to get out of that stuffy club despite the fact it was raining outside. An interesting side-story, I went for a little walk, and was approached by some random guy offering me “Sexy time” with an idol, and was showing me photos on his phone of young girls, who I think he might have pulled off the 48-group websites. I told the guy I didn’t want any trouble, and then told him I only had 3000 yen on me, at which point he got the message and walked away. I can only imagine what kind of scam that was, but I’m sure whatever it was, it wasn’t going to involve “sexy time” with an idol, LOL. But back to FES☆TIVE.

This is kind of an end of an era of sorts. I first saw FES☆TIVE in San Francisco three years ago, and it was such a memorable experience. For the past 2 1/2 years I have maintained that “Idol-fan relationship” with them. After these three leave, that’s pretty much two-thirds of the original group gone. Lucky for me, my two favorites have both hung on since the beginning. And I must admit, Saria and Piano have ultimately meshed in very well with the group, which was something I wasn’t sure about last year. The rumor is they are lining up three replacements as we speak, so what this group turns into will be interesting. My friend Anthony pretty much said he would be retiring from idols after this (he also likes Alice Project), but he might go and see KissBee with me if I catch him on a good night. For me, as long as Hinari is still there I will stick with them….I think.