I have been anticipating these HKT shamekai events for a while now. Although I had heard mixed reviews about the event. As you may have noticed, HKT’s album was coming out right before AKB’s album, which meant that HKT fans would have to double-down on album purchases. Not to mention HKT’s album ‘theater version’ was more expensive than AKB’s. This ultimately negatively impacted HKT’s album sales. I know it affected me, as I originally bought only six cds/tickets, three for each Tokyo event, although I ended up purchasing two more in a later resale round to make eight total.

The other thing I heard was “Well, it’s basically the same as an AKB event.” We’ll see about that.

I had also purchased a ticket for Wasamin’s cheki event in the late afternoon, so the plan was to get out of the HKT event as quickly as possible and then head over to nearby Gotanda to see Wasamin.  I arrived at Ryutsu Center at 11:45, shortly after the beginning of Slot 2. The venue is in the middle of an industrial area without much surrounding it, and you have to take the Tokyo Monorail to get there, which is a slight pain, although it does drop you off right at the entrance of the building. There was a big queue to get in, but it went fairly quickly, a little more than five minutes. It was a strange setup, since the event rooms are extremely small, especially compared to Yokohama and Makuhari. In fact, they couldn’t even fit all the lanes on one floor. Lanes 1-13 were on the first floor, and lanes 14-24 were upstairs on the 2nd floor. LOL. The fan area was tiny too, so most people just went outside when they weren’t doing handshakes. Also, it was hot as hell inside, so I had no desire hanging out in there longer than I had to. I went to my Slot 2 lane, said hello to a couple of fans I knew, and headed in…

Akiyoshi Yuka (Lane 5) I got a message from a friend that Akiyoshi looked lonely sandwiched between Mikurin and Sakura. I told him I was on the way! As expected, she had no queue, all of her fans were hanging outside the lane. She’s still in a cast and on crutches, so she stayed seated. The neat thing is each lane has a special backdrop that is based on whatever the day’s theme is. Today is “Sports Day.” the girls are also supposed to dress sporty. I waited for two people to go before it was my turn. Yukachan greeted me with a big smile and I gestured toward the food on the table. “Tabetai! Of course, I could have been talking about her. (LOL) She asked what pose, and we did the one I usually do with Maichan. 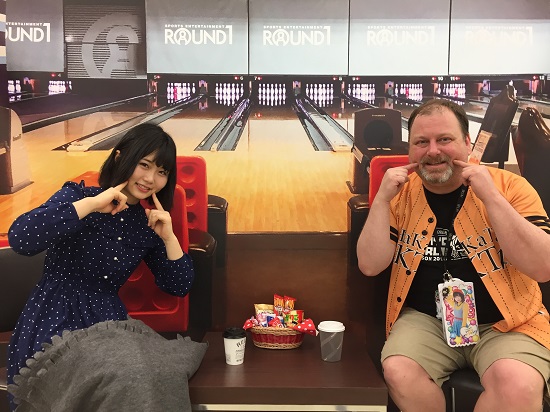 BTW, we’ll give Yukachan a pass for not dressing ‘sporty’. It’s a really nice pic, right? In fact, the first person I sent this to thought we really took the pic in a bowling alley. Anyway, Yukachan said see you again, but I told her that I only had one ticket for today. I think I disappointed her.

I went over to the map to see which lanes my other three tickets were, but I couldn’t find one of the members. Where was she? I double-checked the kanji to make sure I wasn’t overlooking her, and then I saw two members were out for the day, one being Tomonaga Mio. Oh no! I found out she recently had knee surgery, so I don’t know if she will even be back for the next Tokyo shamekai event. It’s times like these when I wish they offered oshimashi. I would’ve happily used the ticket on somebody else. Anyway, I spent the next 90 minutes outside. My plan was to do my one Slot 3 ticket toward the end f the time period, and then prequeue for my Slot 4 ticket since I needed to get out of there ASAP to go to Wasamin’s cheki event. Unfortunately, there were ants everywhere, and at one point I had a couple crawling on me. I was sure to brush them all off before I headed back in for Slot 3…

Murakawa Bibian (Lane 21) My one trip upstairs. Surprisingly, it was much cooler in the upstairs hall than the downstairs, but I think that was mainly because downstairs had all the senbatsu, and was much more crowded. Bibian’s lane was completely empty, and I could see her fiddling with her phone while in her booth. She spotted me coming down the lane and began waving to me. It’s nice when the experience begins early like that. I immediately noticed all the basketballs, and the schoolyard court scene as the backdrop. I asked her if I could pick up one of the balls. It was cool, we both grabbed one… 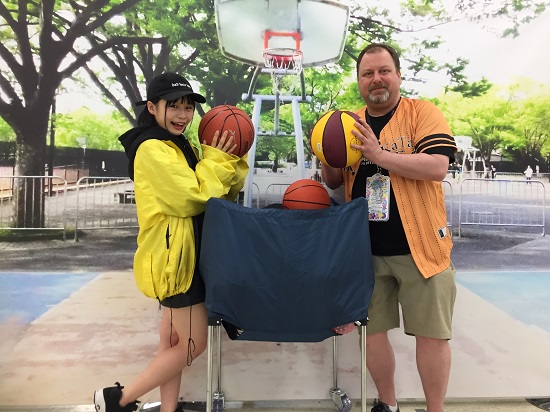 I think this pic is great. In fact, most everyone I have shown it too has really liked it. It makes me wonder what people were saying about it being “the same as AKB’s shamekai” I think it’s completely different. It’s also fun to play off the backdrop. Bibian asked if she would see me again soon. I wasn’t sure if I had any Bibian tickets coming up. Later I checked, and found I have one in July for the last Jabaja event. So it will be awhile. Oh well…

Fuchigami Mai (Lane 3) I got to the queue early, and maneuvered my way around all the Piichan fans who were waiting to say goodbye to her. I managed to get third in the queue, which was good since the queue got extremely long before the lane opened. I got a peak at the decor when the guard pulled the curtain for a moment. It was darts. Okay, bowling, darts, beer drinking sports, LOL. Maichan had a cute little tennis outfit on. She asked what pose, and I suggested that we pretend we are throwing darts. I didn’t notice that there were actual darts as a prop on the table. To my surprise, Maichan reaches in and hands me one. Really??? With all the caution about weapons? The guard immediately lunges over like “Nooo!!!” Maichan quickly grabbed it back from me. I actually left it resting in my open hand instead of clutching it since I had a feeling the guards would have an issue with this. I started laughing since I found whole exchange to be quite comical. 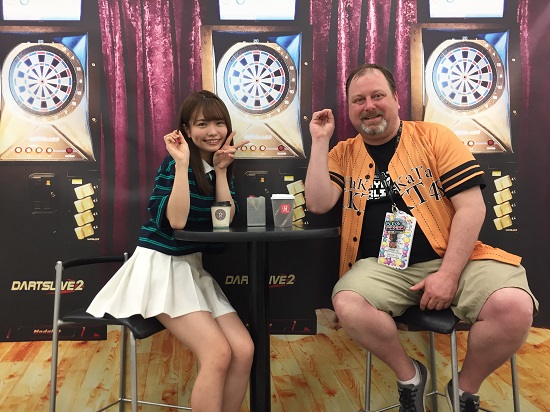 Ultimately, she was able to hold a dart, while I just had to fake it. No problem. It’s another cute pic. As I left the lane I heard the guards discussing with her about the darts. So I doubt they had that issue anymore. But yeah, interesting prop considering the safety concerns.

Ultimately, I really like the way these photos came out. The whole idea of the backdrops and the themed clothing is a really good one. They should definitely think about doing this again in the future. AKB could even do it.

BTW, the other HKT48 Shamekai event in Tokyo is next month. I was hoping that maybe I would be able to do a makeup for Mio’s tickets, but she might not be back by then. My other four tickets for that event are for Akiyoshi (x2) Maichan, and Rikopi. I’m looking forward to it.  Anyway, I had plenty of time to get to Gotanda to Wasamin’s cheki event, so I didn’t need to rush.

When Ichikawa-san announced the dates for Wasamin’s 7th single chara-ani events, I was disappointed to see that the first date fell on the same day as the HKT48 Shamekai event. I quickly checked the second date, and noticed I had nothing else scheduled, so that was a relief. However, I didn’t have very many HKT tickets, so I compared my HKT schedule with Wasamin’s cheki schedule and figured out that my last HKT ticket was at 2:30, while Wasamin’s 3rd and last cheki slot was at 3:30. So I could definitely make it. In that spirit, I purchased one ticket.

Well, all went according to plan. I finished with HKT at around 2:40, and made it to Wasamin’s event by 3:15. When I got upstairs, they had a booth set up to get additional tickets if you wanted. I never saw them announce this, but that’s ok. I wanted to make the most of the trip over, so I purchased an additional cd/ticket. I went into the pre-queue room, and all the Wasafans noticed that a) They hadn’t seen me in a while, since I have missed the last few Wasamin mini-lives, and b) I was wearing HKT gear (LOL) While we were waiting I showed them my shamekai from the HKT event.

Eventually I was called into the main queue. In the meantime I took off my HKT jersey. Sasou-san saw me peaking from around the corner and started laughing. Wasamin eventually saw me and exclaimed ‘KURISUUUU!!!” with kind of a crying face, indicating to me that she missed me, and perhaps wondered where I had been. I immediately noticed she was wearing the dress from her Ebisu Garden Hall concert., and she had on sexy red heels. She asked if I wanted to take a full body shot, but I said the face and torso were fine. I got two pics…

I got most of the dress anyway. Sasou-san is a pro at taking chekis. In the meantime, I was telling her about the big paper that I had to write tonight, and that I also had to write an essay in Japanese. She asked what the essay was about, and then asked if she would be seeing me again soon. (Actually, I didn’t mean to miss a bunch of events, it’s just that her events recently have either conflicted with the AKB handshake events, or have been very far away. Admittedly, I missed one because I had a hangover.) I reminded her that I would see her on Wednesday since she is performing very close to where I live. She was like, “Oh yeah Itabashi!”

And with that I took off. I rushed home to start my paper, but instead I am writing this report.

I’ll get it all done one way or another.