If you look at a map of the major JR Lines from Tokyo through Saitama Prefecture, you will find that almost every station has a big mall either very close to it, or attached to it. I was thinking about this as I was traveling on the Takasaki Line today. There are NINE Stations on that line from Akabane to Jimbohara where Wasamin has performed. If you add the other major trains that travel through that area, you can add around 6 more stops. It is safe to say that Wasamin has heavily promoted herself throughout the main Saitama corridor. 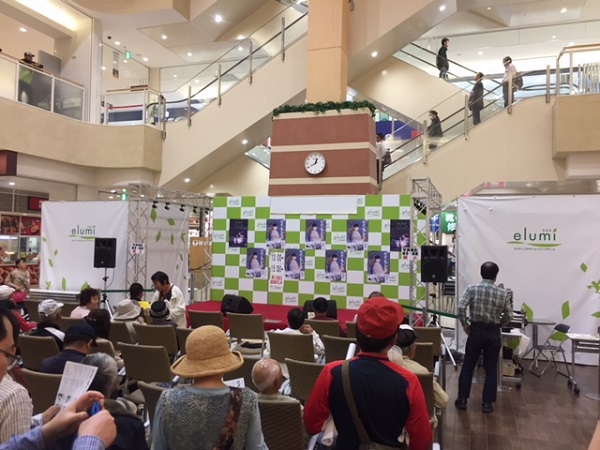 This is not the first time Wasamin has performed at Elumi-Konosu, although it was the first time I had seen her there. The mall is actually connected to Konosu Station. Go out the station gate, and there’s the mall. It wasn’t the most lively mall, although I wouldn’t call it empty either. It just seemed as if there wasn’t much of a selection of shops, so nobody would really go there merely to browse around. The stage setup was in the center court, against the escalators and opposite the food court. A great place to attract passers-by and casual onlookers for her two performances. Most of the locals had camped out the seats early, so many of the Wasafans stood in the back, including myself. I was also happy to see Wild-san, who had made the trip from Shiga Prefecture, and well as Mizuyu-san, who hadn’t been to an event in a while. Here are the setlists…

The audio system sounded terrible. This was probably another situation where the mall demands the volume be kept at an unreasonable low level. Quite odd since their ads promoted many musical appearances in the coming weeks. But it also sounded quite muddy too. I think it was affecting Wasamin a little bit too as she got a tiny bit pitchy a couple of times, which is unusual for her.

I decided not to do any preordering of the 4th concert DVD today, instead buying CDs. I ultimately went for a 2-shot in the early event, and a handshake in the second. 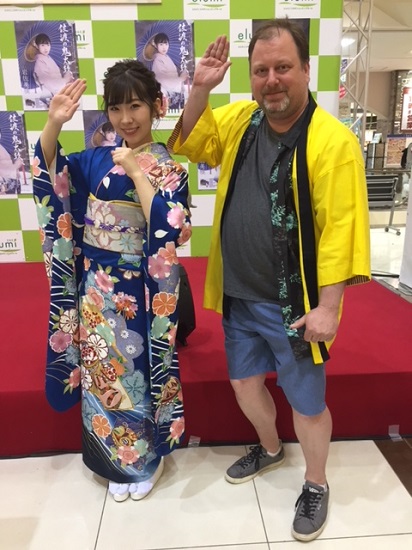 Wasamin and I doing a pose from Sado no Ondeko. Anyway, I decided to tell Wasamin all about my first ever trip to see a Japanese Major League Baseball Game. I was also relating the story of how I got to go onto the field take a photo with all of the mascots after the game, including the Phillie Phanatic, who was there as a special guest. Wasamin has performed at Maiji-Jingo Stadium before, so she agreed when I said I thought it was a very nice venue. 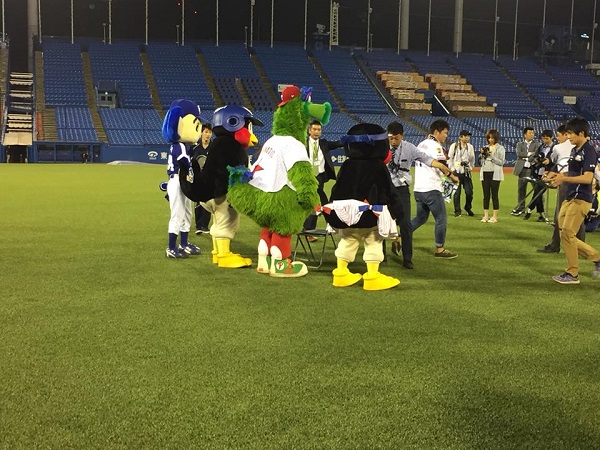 I took this while in queue for the photo. They are sending me the pic later.

For my second visit I showed her a picture of the mascots. (Not my group shot, they haven’t sent it to me yet) But I wanted to show her the Phillie Phanatic since he looks almost exactly like SLYLY, the mascot of the Hiroshima Toyo Carp, who Wasamin has also taken a photo with. Finally, I wanted to confirm the radio show Wasamin was going to be on. I thought I heard her say “Rajio Beverly Hills,” and I was right. When I told her that Beverly Hills is the town I grew up in, she asked me how to pronounce it, which led to the always hilarious Japanese trying to fake an American accent, LOL.

Wasamin and SLYLY back in 2014

Wasamin has performances in Yokohama on Saturday, and back up to Saitama Prefecture on Sunday. Her appearances on Sunday, and the following Saturday in Ibaraki are both at malls in extremely remote locations that are very hard to get to. No train, no direct bus. So I am probably going to skip those. I will probably hit tomorrow’s Yokohama events though. After that, next up is Wasamin’s Bus Tour to Shizuoka. That promises to be a lot of fun!