So I had a change of plans…

Originally I planned to hit Wasamin’s Saturday Event in Yokohama, and skip the Northern Saitama event since 1) Kamisato is friggin’ far from Tokyo, and 2) The Mall is not near the station, and there is no bus that can take you there. However, as I was going through the schedules of the various groups I like, I noticed that Minyo Girls was also performing at Kamisato on Sunday. Ahhhhhh, it’s a dual-live event. That changed everything! Although I did have tentative plans to go to the various Golden Week festivals in Odaiba on Sunday, I decided to skip them since I was getting both Wasamin and the Minyos in one shot.

By the way, although I didn’t go, I still have the lowdown on the Yokohama appearance. Wasamin hinted that she would be doing more than the usual four songs at the Yokohama events. Here are the setlists from Saturday…

So on Sunday I knew I had a long ride ahead of me, and the first Minyo Girls event started at 11:30am, so I headed to Akabane Station around 8:45am. By the time I arrive there were no Express or Rapid trains leaving until 9;40, so I grabbed some breakfast at the station while I waited. The nice thing, despite the 85 minute ride, is that it was only one train. Or so I thought, I didn’t realize the train split in half around halfway there, and I was in the wrong half of the train, so I had to hoof down the platform to the other side. Aside from that, it was a smooth ride. My next dilemma was how I was going to get to the mall. According to the map, it was a 2.4km walk. Not too bad, except I only had 30 minutes to get there. Luckily, there were a couple of other Minyo fans on the train, and we split a taxi. I made it on time, yatta! 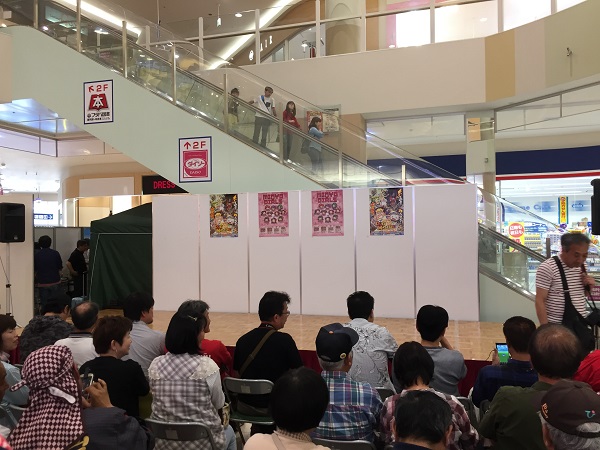 I’m going to skip the Minyo Girls portion of the report, and focus on Wasamin (I will post about the Minyos in their thread) For starters, here are the setlists for Kamisato…

Kamisato is just below Gunma Prefecture in Northern Saitama. In fact, there were a few big Wasamin fans from Gunma in attendance. I had never met these guys before, but one of them, Tanaka-san seemed to know who I was. He also knew @Tensai from TV. Ultimately, he ended up being my buddy for the day.

During the first performance Wasamin was asking where everyone was from. Some of the locals kept looking at me expecting me to say something, but I kept quiet. I always say now I’m from Itabashi, LOL. Wasamin also forgot her little cheat sheet that she used to talk about her upcoming appearances and stuff, so she had to wing it. Ultimately she told everyone to just check her website, LOL. She also talked about how often she has performed at this mall. For me, it was my first time seeing her here, but according to fans she has performed in Kamisato on six different occasions.

They had a weird system for pre-ordering at the sales desk, although they were offering free shipping. I had already pre-ordered four copies of Minyo Girls’ new single, so I decided to be frugal with Wasamin and skip the Concert DVD preorder. Instead I bought three copies of her 7th single, which afforded me one shamekai, which I use in the first set, and one handshake, which I did in the second set. 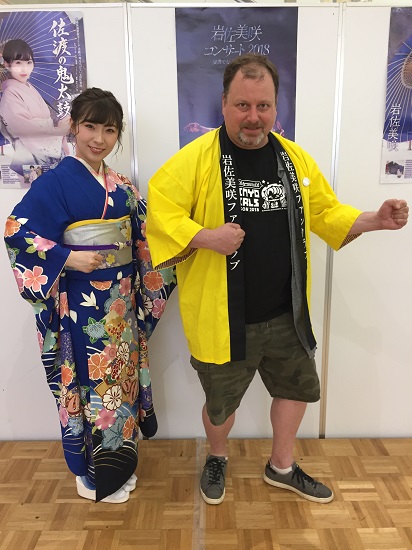 Wasamin and I doing one of the poses from her Sado no Ondeko routine, although I have it totally screwed up. Afterwards I told her that I knew from memory all of her promotions that she was supposed to do. However, as I rattled them off I forgot one of them, which she reminded me of. But I think she was impressed that I knew most of them. The TV appearance, the radio show, the upcoming play, the Yokohama concert, and some Karaoke event she is part of. For my handshake she asked me if I enjoyed Minyo Girls, it was just then that she noticed that I was wearing a Minyo Girls T-Shirt. Jeez, Wasamin, I have worn it to your event at least 3-4 times! Ichikawa-san was laughing since she is well aware that I am a Minyo fan. I whispered to her that I also have a Minyo Girls’ Happi coat. Anyway, I told her that I had an extremely fun Golden Week, and told her a little bit about my adventures in Odaiba last week before my time was up. Wasamin was like “too much beer!”

After the event, the fans who drove carpooled some of us back to Jimbohara Station so we didn’t have to take the big walk. Since this was the end of Golden Week, the train was packed with people returning to Tokyo. Suitcases everywhere. It was a local train too, so it took extra long. But I finally made it back to Akabane around 7pm, had dinner, then went home and crashed out!

I’m skipping Wasamin’s two events next weekend. Saturday she is in Shimotsuma, which is on the outskirts of Ibaraki Prefecture, and just too difficult to get to without a car. Sunday she is performing in Akita Prefecture, which is almost to Hokkaido. Not to mention I am going to AKB’s Shamekai event that day anyway. So my next Wasamin encounter will be her Bus Tour on the 16th! After that, just waiting on her concert DVD release week schedule.