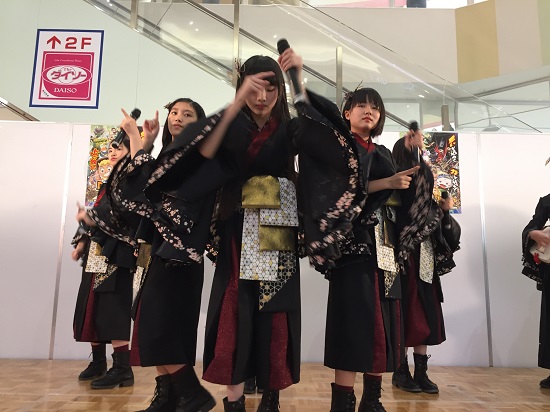 I must admit, I am still kinda bummed that I missed the Minyo’s one-man live last weekend in Asakusa. I had a great entry ticket number too, which probably would have gotten me against the stage. But I made the mistake of going out and partying late the evening before, and I was just too tired to go. With that in mind, I felt like I owed it to them to make it to one of their live events in the near future, especially since they are promoting the release of their first single, which is a tie-in to an anime called Dual Masters! The single is called “Kirari ☆ Yume Ondo,” which while having a hint of traditional folk to it, is definitely more of a pop song. Anyway, when I was planning out the weekend, I noticed that Minyo Girls’ and Wasamin were both performing at the same mall on Sunday. I originally planned on skipping this Wasamin event, since Kamisato is extremely far from Tokyo, practically on the border of Saitama and Gunma Prefectures. But since I was getting two-for-one, seeing both Wasamin and the Minyos, it made the trip more worth it to me. So I swapped my Saturday and Sunday plans, and made it out to this event….

Minyo Girls management does a great job of informing you about little details for each appearance. Not every member performs at every show, and their Twitter schedule details each performance lineup well in advance. That said, I was kinda bummed that Yuua and Yutori were both not performing on this day. However, Miyabi would be there, as would their brand new Shamisen player, Ramu. I was really interested in checking out her Shamisen skills.

Since I knew it would take me a while to get out to Kamisato, I left my house at 8:45am bound for Akabane Station. However, by the time I got there the next Rapid or Express Train wasn’t leaving until 9:40am. This was cutting it kinda close for me. I would get to Jimbohara Station 30 minutes before the first performance, but Aeon Town is around 2.4km away from the station, and there are no buses. So I would need to make the walk in 30 minutes, or take a taxi. Luckily, I ended up on the train with a couple of Minyo fans, and we split the taxi to the mall.

The girls came out 10 minutes early to do one rehearsal performance of the new single, and then went backstage to wait for the official event. The way the day worked, Minyo Girls performed at 11:30am and 2:30pm, while Wasamin performed 1pm and 4pm. It was going to be a long day. As far as the Minyo Girls’ Setlist, I don’t really keep track of which songs they perform in which order, but I am getting better at recognizing their songs and titles. He are some of the songs they performed, in addition to Kirari ☆ Yume Ondo, which they performed at both events…

Okay, let me take on a few Minyo subjects….

1) The new costumes. They are really cool. From the beginning I have always thought the group has nice costumes, and with each change they upgrade to something even better. The bottoms look like long skirts, but are actually baggy pants The tops almost make them look like samurai. The only trouble I see is that with the Summer fast approaching, they might be uncomfortable performing outdoors.

2) Rina-chan. She was the first “new” member to join the group shortly before Fuka and Miki’s graduation announcements. At first I didn’t think she was really fitting into the group. However, I feel totally different after watching these performances. First of all, she can sing! She has great projection and control. She’s definitely one of the strongest singers in the group, and that’s saying something since most of the members are pretty good singers. Second, she’s a good MC. This was the first time I had ever seen her take center stage and MC a segment. She seemed right at home, confident, smiling, having fun. Let’s just say that I have finally “accepted” her as a Minyo Girl, LOL.

3) Ramu-chan, the newest full member. OMG, she is as adorable in person as I thought she was in her photos. When Miki graduated, I was extremely worried that losing their Shamisen player would leave a gaping hole in the group dynamic. Apparently they felt the same, as they wasted little time in finding a replacement. Now the question is whether Ramu-chan is as talented on the Shamisen as Miki was. After seeing this live, I have no idea. She wasn’t really playing. First of all, the instrument wasn’t plugged in, and it was fairly obvious that she is in the process of trying to learn the songs. She had an intense look of concentration on her face, and seemed focused on following along. Keep in mind that she just joined the group a week ago, so we will give her some time to figure things out. That said, it seems like the entire fanbase has become smitten with her, as she was BY FAR the most popular member taking chekis. It seemed like every other person chose her to take a cheki with, LOL. 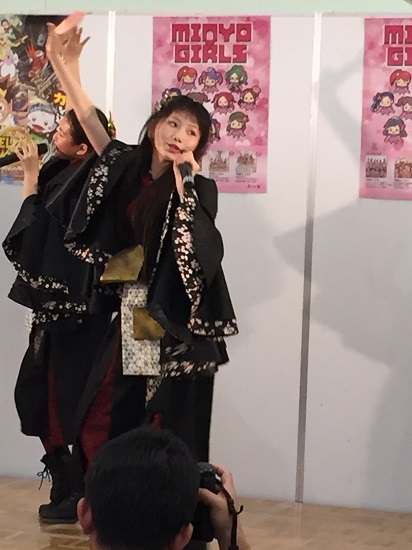 4) Miyabi-chan. With Yuua not performing at this event, Miyabi-chan functioned as the group sole center. Sh’s not the only one to sing solo lines. In fact, Kako, Matsuri, and now Rina all get considerable solo time. However, Miyabi stands at Zero Position at the beginning of every song. The other thing I noticed, and I noticed it a few days ago on her DMM Yell account, her face has completely broken out. Oh no! Poor Miyabi-chan. But alas, she is 13 years old. Sometimes these things happen.

5) With the exception of a few of their old ‘staples’, they are focusing a lot on their newer material. I m happy about this, since I think their newer material is really good. In fact, I can’t wait for their next EP since I want a recorded copy of Akita Ondo, as well as Kokiriku Bushi.

I stood in the back for three of the four events since I arrived late, and all the seats were taken by locals, and a bunch of the Wasafans who apparently got to Kamisato first thing in the morning. However, Wild-san, a Wasamin fan from Shiga Prefecture, offered me his first row center seat for thesecond Minyo Girls performance. Since they allow photography, I got a bunch of great shots of the group. Of course I focus most of my shots on Miyabi (and Yuua when she is there) But today I was fixated on taking pictures of Ramu-chan. LOL. 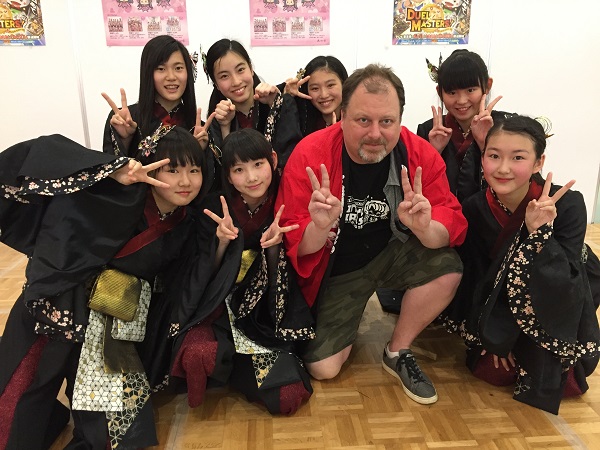 I had four tickets. In the first set I used two to take a group Shamekai. The nice thing is after the shot you get to shake hands with all the members. For the second set, I decided to do chekis instead. I cheki cost one ticket, plus one ticket to get it signed. However, I decided to forego the signing and get two chekis instead. For the first cheki I of course chose Miyabi… 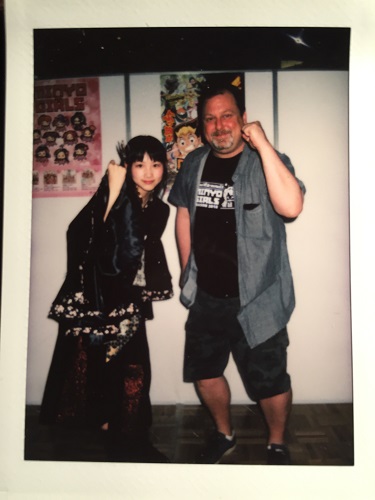 I basically told Miyabi that I think the new costumes are cool, and I would see her again soon. Afterwards I saw Miyabi’s mom, and I think her dad was there too. Since they live in Gunma it would make sense that her family would be there. I also saw Izumi’s mother, who I met once before. There was another family there, but I’m not sure who they belonged to. Maybe Ramu-chan? Anyway, Miyabi’s mom said hello and thanked me for supporting her daughter, and both her parents waved to me when they left after the second performance.

Now I could have just waited and had Miyabi sign the cheki, but instead I decided on another photo. Let’s see, who would I be interested in taking a photo with? At this point for me it was a no-brainer… 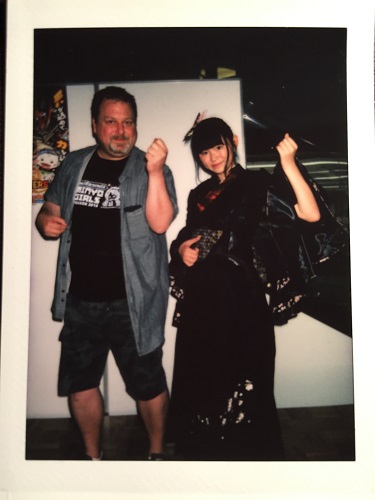 As I said before, it seems like all the fans are smitten with Ramu, and I totally understand why. With every photo she just seemed more and more amazed that everyone was asking for her. She must have thanked me 3-4 times while we were taking the photo, which was a “Shamisen Pose.” The bad/good news was that when the cheki developed, it didn’t expose properly. They had just finished the chekis when I noticed this, but I showed it to her manager, and she said no problem and had Ramu-chan come over to re-take it. BTW, I asked her a couple of times if she was practicing the new songs, but she just kept thanking me. 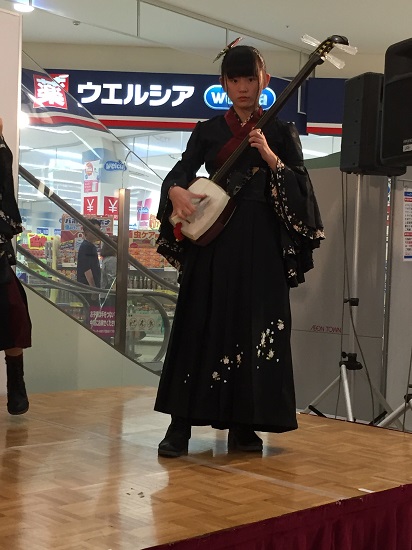 Ultimately, I am happy I made the trek out to Northern Saitama Prefecture to see them. They have a few live events coming up next weekend. The only one I can potentially make it to is on Saturday night in Yokohama, where they are doing a free outdoor live in front of Tower Vivre. But I have a friend coming into town that day too, so we’ll see.