This is the second time I have ever been to an NGT exclusive event. The first time was their Zenkoku event for the 2nd single, and I mainly went to that one out of sheer coincidence, since both HKT and AKB were also doing events at Makuhari on the same day. Actually, I hadn’t planned on going to this event at all. However, my friend Derek asked me to keep him posted on when the next NGT48 event would be, and when I reminded him he just assumed we would be going to the event together. So technically my main motivation in going was merely to hang around with Derek, the event was secondary. That said, one never knows when a magical idol experience might occur. And today ultimately ended up being very special…

I resolved that if I was going to attend this event, I was going to limit myself to two tickets. However, after checking the lane assignments there were three lanes I was interested in…

Lane #4: Nishigata Marina/Kado Yuria. I met Marina at the first event I went to, and she was really sweet. So I kinda wanted to see her again.
Lane #10: Yamaguchi Maho/Yamada Noe. Noe tried to fish me hard at that first event, and she was coupled with Maho, who I wouldn’t mind meeting.
Lane #1: Ogino Yuka/Murakamo Fuka. My brief encounter with Ogiyuka at Horipro Fes was quite memorable, so I considered this lane as well. 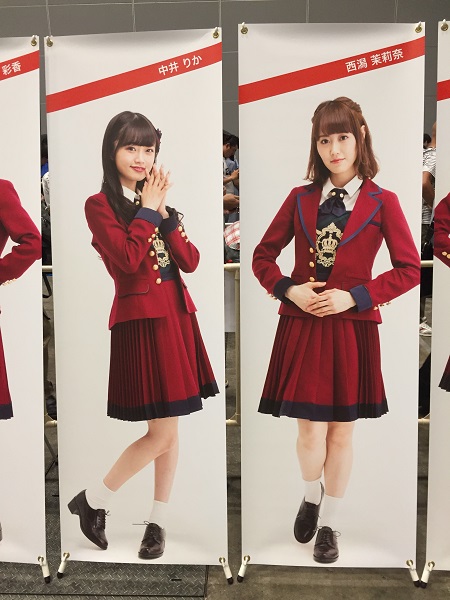 Marina was a possible for my two tickets. Rika I wasn’t so keen on meeting this time.

As for which of those lanes I wouldn’t visit, I decided I would let the event determine. Let’s see if any of these girls grab my attention during the live. I met with Derek outside the train station, and we headed to the hall to purchase CDs and get tickets. We also happened to run into Paul again, so we decided to all hang out together during the live. That is, unless we got different section tickets, but we all got section B, so we were cool. We positioned ourselves on the far right side of the standing area, just in case the members walked around the hall, we would have a great view. Although I wasn’t sure this would take place at all since there was no bag or body check before the show. At 1pm the Overture started, and here’s the setlist…

After the fifth song the NGT draftees came out and did their intros. I can’t really tell you which ones stood out for me, although a couple of them seemed extremely genki and outgoing, while a couple of them seemed more reserved. They were also playing a series of games, where a question was asked and everyone wrote their best answer. For example, “your favorite place in Niigata?” Most of the wrote the NGT Theater, although one member wrote “My room” and another wrote Niigata Eki, LOL. I thought the unit songs were kinda cute, although Watcha Gonna Do is quite fierce, and it was by far the loudest song of the set. At one point they asked who was seeing them for the first time, they also asked who was coming to their individual handshake event on Sunday. I heard a bunch of people muttering about the HKT Shamekai event, LOL. I mentioned to the three guys in front of me that I was also going to HKT, and we all started laughing. Oh, and there was another guy in front of me who smelled like a soiled diaper. I don’t know why I often find myself next to these guys. I wanted to move, however I had a really nice view from where I was standing, and didn’t want to give it up. But I was holding my towel over my face for quite a bit of the show.

They ended the show with their signature MaxToki, with all of the members roaming around the audience. They also had the plastic balls with personal messages to throw into the crowd. It seemed like all of the members kinda congregated in one general area, but then they spread out again, and only at the very end of the song did they start throwing the balls. All of a sudden I saw a ball coming in my general direction, but it was going to land a bit short of where I was standing. Then I watched it bounce, bounce, bounce until it hit me right in the chest… 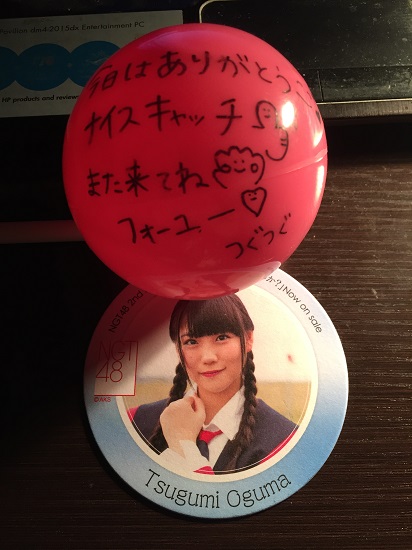 Both sides of the ball, and a gift coaster from the fan in front of me who I think tipped it into my chest.

I jammed it into my pocket as fast as I could. I guess nobody really noticed that I caught it, as a few minutes later I pulled it back out of my pocket, and everyone around me kinda gasped. “Sugoi, you caught it!” I didn’t know who threw it to me, so the fans told me it was Tsugumin. To be honest, I had never noticed this girl before. But that all changed after catching that ball.

So now I had a big dilemma. There was no way I was going to miss the chance of meeting Tsugumin after catching her ball. The question was which ONE of the other three lanes would I visit? I eliminated the Ogiyuka lane right off the bat, since I have never considered myself her fan. I do like her however. It came down to which lane I thought I would have the most fun with. Derek and I re-queued for the handshake portion of the event (I don’t know where Paul disappeared to

) After going through security, I checked out Tsugumin’s Lane assignment to see who she was paired with. I also wanted to memorize their faces since I had never met either of them before, and if they looked any way similar I might mix them up. 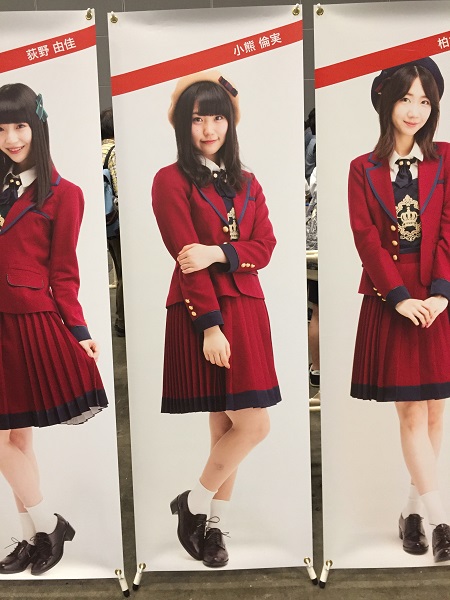 (Lane #2) Oguma Tsugumi/Kusakabe Aina: I checked their official profiles. Oh look, Tsugumin’s birthday is one day apart from mine, neat! But crap, they have the exact same facial expression on their profile pic. It was just then that I happened to see one of the Wasafans come out of her lane, but he kinda disappeared before I could catch him. As I was standing outside the lane still trying to memorize the girls’ looks, he came back. So I jumped in the queue behind him and asked him if Tsugumin was on the right or the left. He told me she was first, on the right. But then he took it a step further…

I entered the booth, and the first thing Tsugumin says to me is “Kurisu!!! Omedetou!!!!” It turns out that not only did he tell the girls I caught the ball, but he also told them my name. So both Tsugumin and Aina yelling my name and congratulating me, and Aina eventually asked where I was originally from, so it was an awesome experience. I left the lane so happy!

I considered using my second ticket for looping their line. But I believe in ending on a high note, and I will definitely see Tsugumin again, so I decided to instead use my 2nd ticket on someone else… 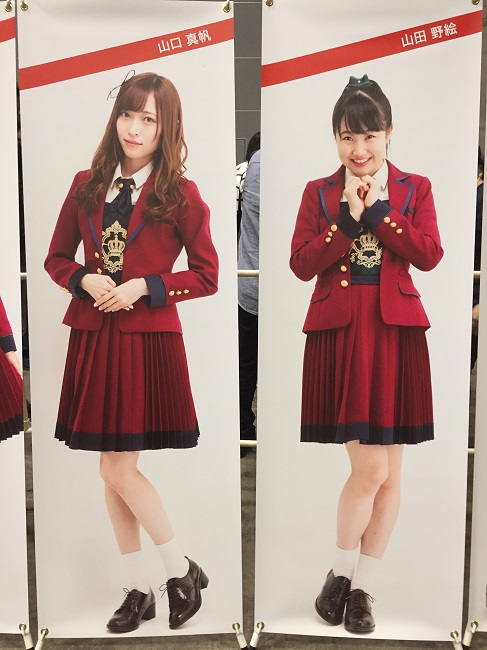 (Lane #10) Yamaguchi Maho/Yamada Noe: I know Noepii is always like ‘shot out of a cannon’ from meeting her before, but Mahohon seemed like an intriguing member to meet, plus she was highly noticeable in Watcha Gonna Do. I entered the lane, and Maho kinda put her hand on her chin and smiled as I told her that I enjoyed her performance on the song. She winked at me, and then thanked me. Nice and subtle, unlike Noe. As expected, I was immediately greeted with a rapid fire of English, which I parroted back at her. Eventually I reminded her that me met at their last Tokyo event, it was just then that I got a good shove from the guard. BTW, Noepii looked MUCH cuter than the first time I met her. In fact, now I am wondering why I didn’t think she was that cute the first time I saw her. Oh well…

And those were my two tickets. I considered getting one more, as they were still selling CDs inside the venue. However, I purposely brought a small amount of cash so I wouldn’t overspend. Instead I took photos of the cardboard stands before leaving the venue, and running into another Stage48 user (Riina!)

Ultimately, I am very happy that I decided to go to this event, despite the fact that I have never really considered myself an NGT48 fan at all. Moreover, I have never really had a favorite member in NGT. But when Tsugumin’s ball found its way into my hands it honestly felt like a fated moment. Couple that with the extra special way she greeted me during the handshake, and BAM!

I have found my favorite NGT member.