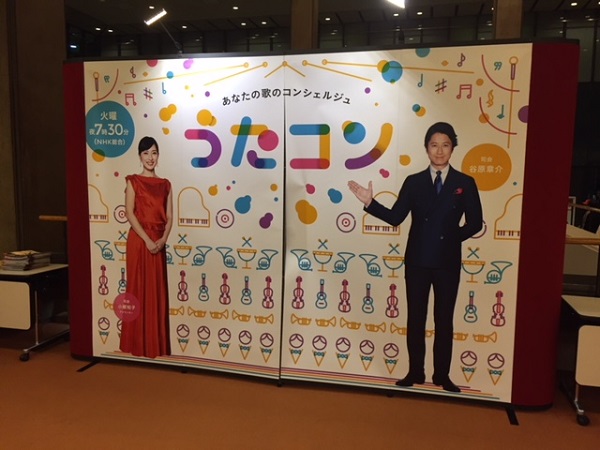 With your hosts Ogo Tomoko and Tanihara Shosuke

I love going to NHK’s TV show recordings when Wasamin performs. I have been to the NHK Kaiyou Concert a couple of times, as well as Music Japan quite a few years ago (where I saw SKE48, SDN48, Perfume, Kara, Speed, Ikimono Gakari, and NEWS, quite the lineup!) This time Wasamin was performing at Utacon, which is more of a mix of pop and traditional music. Tickets for these shows are usually relatively easy to get via the reseller shops, and they are generally pretty cheap. However, I didn’t have to worry about that this time around since one of the Wasafans had an extra ticket and asked if I wanted to come along. Score-a-rooni!

I had a little bit of trouble arranging when he wanted to meet me at the venue. At first he said 2pm, which I thought was really odd. Then he said 4pm, since according to him the show started at 6pm. Okay, I had nothing else to do on Tuesday except study Kanji, so I headed out to Harajuku and to NHK Hall, where he was waiting for me in front of the venue. I found it curious that it was kinda quiet around the hall, and when I looked at his ticket I saw that the show started at 7:15pm, not 6pm. Doors opened at 6:15pm. Why the heck were we here 2 1/2 hours before doors, and 3 1/2 hours before the show? 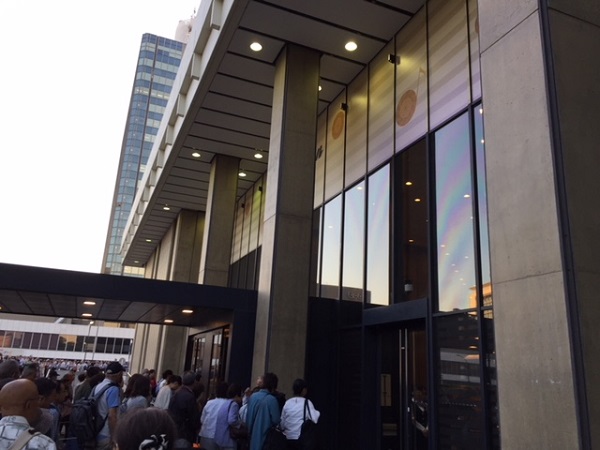 It turned out that it was his first NHK Hall show, so I guess he was under the impression the earlier you get there, the better off you are. As someone who has been to multiple NHK Hall shows before, I know from experience that this isn’t the case at all. In fact, the best ticket I ever got was when I showed up right as doors opened, and was far back in the queue. Anyhow, there was a small line already, which steadily got bigger as the hours rolled by. The front queue is under a bunch of trees, which was nice since Tokyo is currently experiencing a small heatwave. I spent most of the time playing Pokemon Go! while patiently waiting for 6pm to roll around. (LOL) Finally, at around 6:10, the queue began to move. We were among the first people to get into the venue. And when staff handed us our tickets, my expectations were realized, we got 3rd floor seats, albeit the first row of the third floor, so we at least had an unobstructed view. But you see? We were there 3 1/2 hours early to get nosebleed seats. 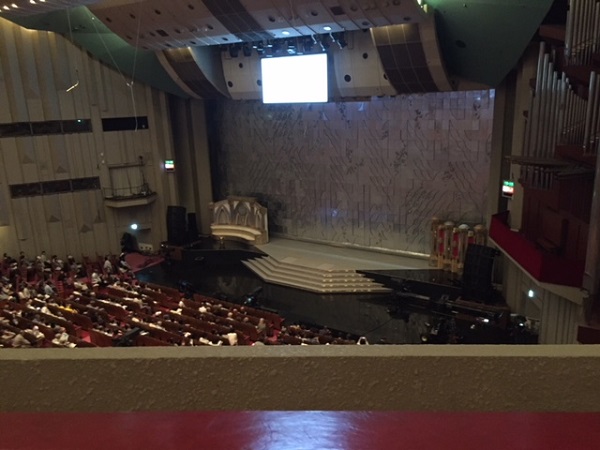 The theme of the show was a celebration of Tokyo in the 70’s and 80’s. So most of the songs would be Tokyo-centric. Among the cast were a few 70’s-80’s idols, and a few younger artists. In addition to Wasamin, the cast included…

E-Girls: who performed YMCA.
Hosokawa Takashi: has been on Kohaku 39 times since the mid-70s, and was in one of the famous Tora-san films. In fact they showed a clip from that movie. (I really want to see some of that film series! If you aren’t familiar, HKT48 did a send-up of it during their Spring Tour a couple years ago, with Akiyoshi playing Tora-san!)
Nagayama Yoko: an idol from the 80’s
Oginome Yoko: another 80’s idol
Miyama Hiroshi: A popular enka singer
Nishida Ai and Mori Konomi: who performed a duet.

There were a few other artists, but these were the most notable. Anyway, the director came out at 7:15 along with a few of his assistants, and they spent the 15 minute pre-show going over how the filming works, as well as a couple of key points where were would expected to do audience participation. We practiced our parts a few times before it was finally 7:30 and time for the show to begin….

I’ll spare you too many non-Wasamin related details. Basically the performers sang a bunch of songs related to Tokyo, inter-cut with video scenes of Tokyo in the 70’s and 80’s and old NHK Utacon clips. The main problem for us Wasafans was that aside from the short opening medley, Wasamin was largely absent for the first 2/3 of the concert. She was sitting in a gallery where the interviews take place, but she wasn’t involved in the conversation. 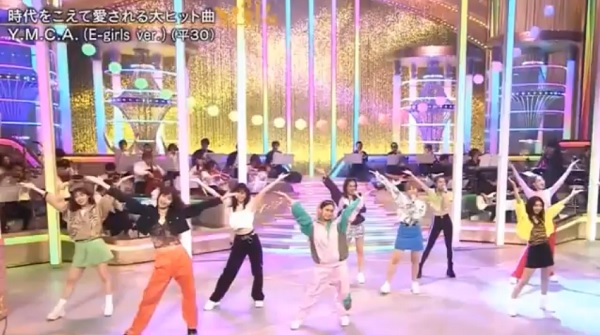 Probably the most awkward part of the show was the transition into E-Girls 2nd performance. Last week Saiji Hideki, who is well-known for his Japanese version of the Village People’s Y.M.C.A., passed away. They did a retrospective of his live on the VTR. It was extremely touching, and a couple people on stage started to tear up, especially Nagayama Yoko who was crying very hard. This directly transitioned into E-Girls, and going from such a depressing moment into such an upbeat and fun song was quite odd. If you have ever heard Casey Kasem’s infamous rant about a dog death dedication, this is exactly what I am referring to. As a former radio host, I am keenly aware of the importance of smooth transitions. This was quite the opposite. 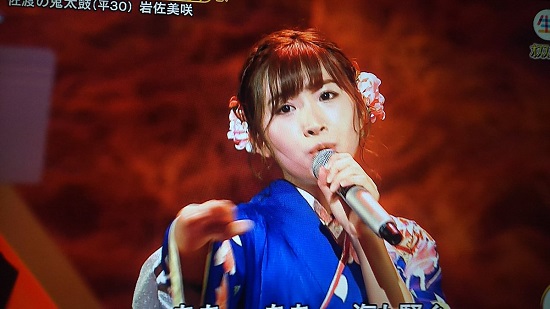 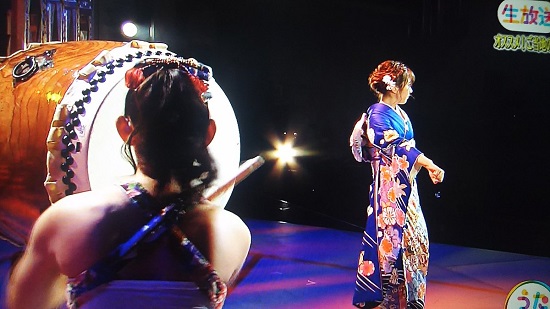 Around 45 minutes or so in, it was finally Wasamin’s turn. What she did was kinda different. She and Fukuda Kohei, another performer, both narrated videos about different locales in Japan. Wasamin was talking about Sadogashima, which led into her performing Sado no Ondeko. They had an ‘Oni’ Taiko Drummer on stage too, which was kinda cool. But it was also kind of odd, since the theme of the show was about Tokyo, and most of the performers sang cover songs. Both Wasamin and Fukuda’s performances just seemed kind of tacked on. As cool as her performance was, I would have loved to hear her do something related to the show theme.

Since it was a television show, it ended exactly on schedule. However, they do a couple more non-TV interviews after the show, and we get a couple more performances. Personally, I wanted to get out of there and have dinner, but we had to sit through the new singles of Nishida Ai, Mori Konomi, and Miyama Hiyoshi before our show actually ended. 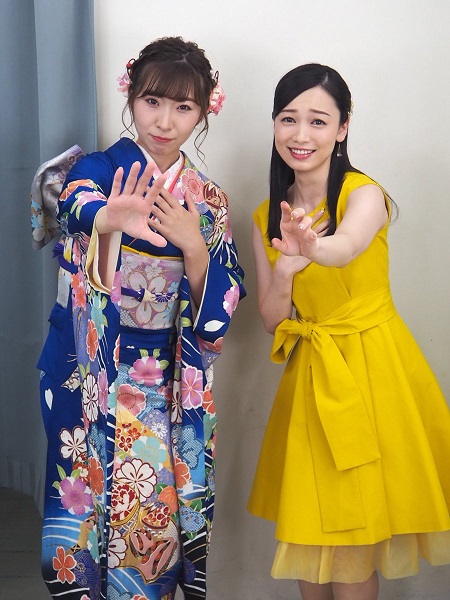 Ultimately it is fun to watch these shows being produced for a live presentation, the way the cameramen, directors, and staff work off-camera while the show is going on is just amazing. Granted, I didn’t enjoy this particular show as much because Wasamin was barely in it, but that won’t stop me from going to see these shows in the future if/when the opportunity presents itself. Anyway, I joined a group of Wasafans at a nearby izakaya for a post-show celebration. It was a long-ass day, and I need some rest.