I mentioned around eight posts back that I attended two mini-live events at Tower Records Shibuya for KissBee and FES☆TIVE.  What I didn’t post about was the return trip I made a couple of days later to see FES☆TIVE at Tower Records Shinjuku.  I didn’t create a new blog entry for it since a lot of it would have been repeating what I had already said in the previous post, save for one little anecdote.  Hinarin is always a fun handshake, and we have had many conversations that have occasionally even stretched beyond the usual idol handshake material.  However this particular handshake and cheki encounter was quite memorable…

I was fifth in line to see Hinarin. When it was my turn I told her that I had a lot of fun the previous evening, and wanted to come back and see her again. Her response totally floored me….

She told me she read my twitter post about her the previous evening. She then recited my entire post, almost word for word (in Japanese, of course) She said it made her very happy to read it…

In that tweet, I basically said I went to the event, and all the new members were really cute. However, Hinarin remains my #1 girl in FESTIVE.

I told her I absolutely meant it. Hinarin then went in for the kill and again started hammering me to go to their event on Friday night. I told her that I already had plans to do something else, but I would come to more of the preorder events.

It just goes to show, idols really appreciate when you write nice things to them.  Anyway, it is in that spirit that I decided to see FES☆TIVE at least once during their release week promotions…

I was trying to decide between two events on Thursday and Friday. One was Keyaki Matsuri, and the other to see FES☆TIVE. Since Keyaki Matsuri is all about beer, I decided to do that one on Thursday just in case I imbibed a little too much it would give me time to recover for Friday night, as opposed to Saturday when I will be at AKB’s handshake event all day.  After a couple hours and a few small beers in Saitama, I got a little bored of beer drinking and figured I would go to see FES☆TIVE after all, and one the way I could knock one other thing off of my “to-do” list and pick up all of my single preorders. 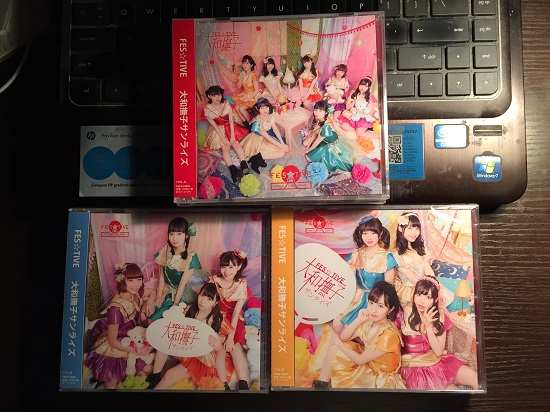 I really wanted to see FES☆TIVE this week since the announcement of Hiyo and Reia’s pending graduation. Not so much for them, but I could tell that Hinarin was stressing quite a bit over all the changes within the group, and I thought perhaps I could help cheer her up. Anyhow, I still got to Shibuya relatively early, and spent some time in the cafe across the street before going into MODI, I made it upstairs around 20 minutes before curtain, bought two more copies of the CD (which makes 2 of each version for me) and got a spot on the far left end of the rail by the DJ. There weren’t very many people in attendance. In fact you could have gotten within 6 feet of the stage up to five minutes before the show, although a few more trickled in at the last minute. I talked to Pin (a FES☆TIVE superfan, who has been going to see them since forever) and she asked where my friend Anthony was. Apparently Anthony told her that he was coming to see the group with me. I was like “Huh?” When I asked him a few days prior he said he might be busy. Oh well. 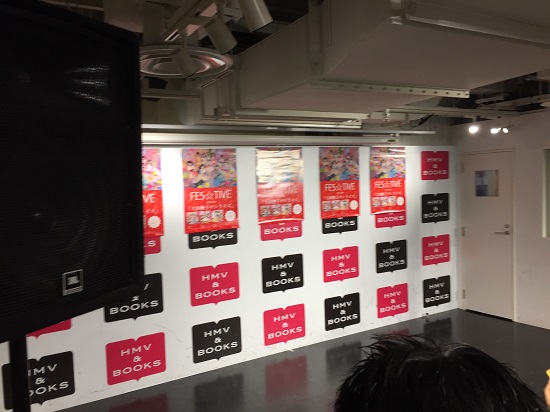 Before the show started Saeko popped out few times for unknown reasons, as did Reia. Well, Reia was talking to the music tech, and playing with his board, LOL. She seemed fairly “devil may care” since announcing graduation. Hiyo-chan seemed unaffected though. One interesting thing, and I didn’t know what to make of it, but at one point there was a very pretty girl standing in the back, and the girls asked shop staff to bring her up to the front, which they did. She was standing right next to me, but in the staff area. I was really curious who she was? Was it an idol from another group? Was it the sister of one of the members? (She looked A LOT like Piano) or could it have been a future member??? She was kinda tall, so maybe Hiyo-chan’s replacement? Ultimately I don’t know, but the girls paid a lot of attention to her throughout the show, and she disappeared right after the final MC.

Another interesting aspect of the show, the new girls are starting to fish me a little bit. First it was Saeko (new green), who was making a lot of eye contact with me and smiling during the rehearsal. Later on it was Minami Marika. (new blue) It seemed like every time I looked her way she was staring right back at me. She was really trying to get my attention.

It took a while to get the cheki portion of the event started. The girls spent quite a few minutes in the dressing room, then they do group handshake and individual handshake before chekis. I had two tickets, and was first in line to use them both on Hinarin. I was surprised, however, how short ALL of the lines were. Hinari had the longest line, with six people in it. After standing there for over 15 minutes, Piano and Marika’s lines were still completely empty, and Saeko’s line had one person. WTF?

Eventually it was my turn. I asked the staff to be careful with my bag. Hinari asked why, and I told her there was beer inside. She laughed, and said she could smell beer on my breath, LOL. (It had been over three hours, I was sober at this point) I asked her how she was doing, and she made the comment about being the only original member left. I told her when I read that I wanted to come see her, and that everything would be okay. It was cute, she dropped the genki demeanor for a few seconds and seemed completely authentic. We also reminisced about San Francisco, when the original group was still intact. At that point I noticed the guy never took our cheki. He forgot… 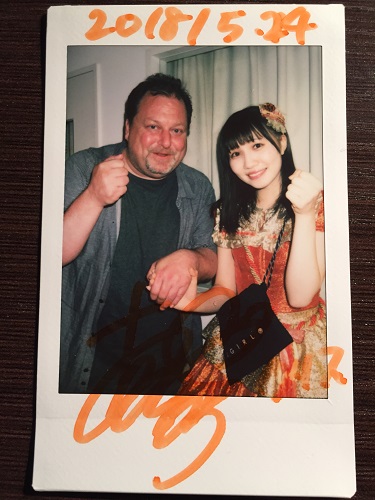 Hinari called the guy over, and he quickly snapped the pic as I was just turning, and still talking to Hinari, hence the weird facial expression. Unfortunately when she gave me the pic it hadn’t yet completely developed, and she had already signed it, so I felt bad about asking for another one. But I knew the moment he snapped it that it would turn out that way. Oh, and this is the second time a FES☆TIVE photographer has snapped me in mid-talk. In fact the last time I was not even looking at the camera, LOL. I finished off by reassuring her the the future of the group would be good, and that I still support her. And with that I took off.

I will be so busy this weekend with other stuff that I will not have the chance to go to any more of FES☆TIVE’s release events, so I am not sure when I will see them again.  However, I look forward to seeing who their new members will be, assuming they continue with that tradition of quickly filling in new girls.