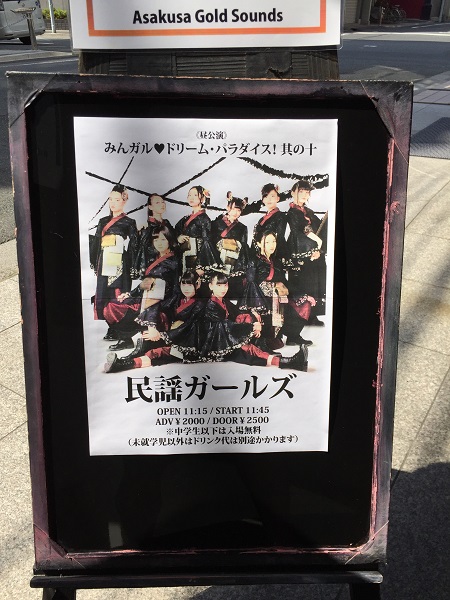 Minyo Girls have been doing their monthly “Dream Paradise” stage at Asakusa Gold Sounds for a while now. It’s a nice little venue located very close to central Asakusa and Senso-ji Shrine. The Minyo’s do a full one-man live with special games and prizes. This is also where they make a lot of their big announcements. It’s a lot of fun. They also use this show to showcase a different side of the group. Today’s theme was ‘Solo Performances.’

Limited Edition photo w/ our lottery drawing number on the back

I was excited to see their one-man live again after missing last month’s edition. I had a really low-numbered entry ticket, which would guarantee me a really good spot too. However, I lost track of time and left my apartment quite late. Based on the train schedule I would arrive 5 minutes before doors. It takes three minutes to walk to the venue from the station entrance. I might make it after all. I turned the corner with one minute to spare, and was disappointed to see they had just opened the doors. Damn! I still managed to get toward the front of the queue, only a couple of places back from where I should have been. Once inside I positioned myself just behind the people standing against the stage at the far left. Not bad.

The show started with the girls’ usual giggle-filled Kage-ana, and then their exotic intro music. Once again, the members were in plain clothes for this performance. Some of them dressed in theme for the solos they were going to do, others went for a cute outfit. After member introductions, the girls went directly into their solos…. 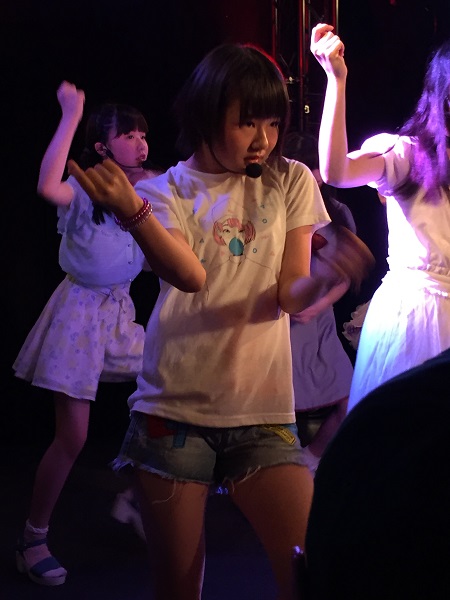 Minori (Yeah! Meccha Holiday!- Matsuura Aya) Once again, Minori shows that she is a true otaku at heart (last time she did a Momoclo song) Minori’s not one of the strongest singers, but like the last time I saw them she had a lot of fun and bounced around the stage quite a bit.

Matsuri (Boombayah!-Black Pink) This was more of a dance exhibition than a singing performance. However, Matsuri did sing parts of the song. This reminded me a lot of watching my nieces dance in the living room to their favorite pop songs. And by the way, I now have Matsuri to thank because I have been listening to Black Pink for the past couple of days, LOL 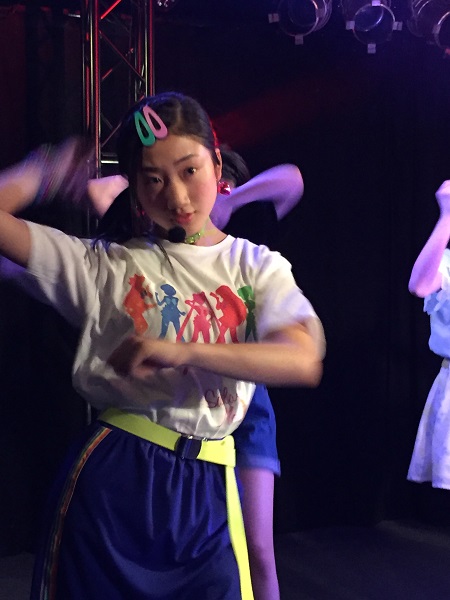 Rio (Moonlight Densetsu-from Sailor Moon) Rio was decked out in her Sailor Moon t-shirt and belted out this song quite well.

Izumi (Heart Shaker-Twice) More K-pop, and another dance performance. Izumin didn’t sing at all, instead trying to incite the crowd to jump, dance, chant etc. Dancing is more Izumin’s forte anyway, so probably for the best.

Yutori (Nagori Yuki- Kaguya Hime) Yutori on guitar and singing. The last time she performed on guitar I mentioned that she played the same chord the entire time. Well, she showed me! She played quite well, and sang the song decently too, albeit at a slightly low volume. This is a song that Wasamin also sings and performs on guitar. And I would say that Yutori’s guitar playing is close to Wasamin’s level.

Kako (Traditional Minyo-style Song) I have no idea what song it was, but Kako’s strong point is belting out that traditional Enka vibrato. She she was on-point in that respect.

Ramu (Shamisen solo) We finally get a chance to hear Ramu actually play. She was all ‘plugged in.’ I don’t think this was a particular song per se, more like general riffing. From the start I thought she was channeling George Thorogood. Really hard chords, and bending the notes. Toward the middle she changed to a more nuanced and traditional type of sound. But it was a nice showcase. It didn’t seem perfect, as I thought I might have heard a few mistakes along the way, but given I didn’t know what she was supposed to be playing, I wasn’t sure. Oh, and Ramukyun had on the cutest outfit of all. The little animal ears were adorable. 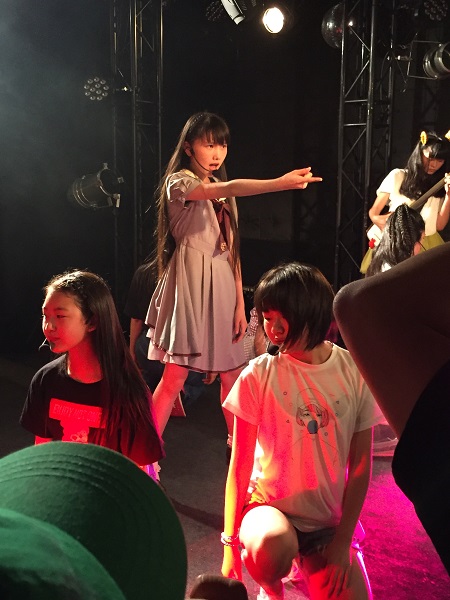 Miyabi (Amuro Namie song) Miyabi in seifuku and a pink wig. Cute! I don’t know which song this was, but per usual she did an excellent job, and showed why she is one of the best singers in the group. 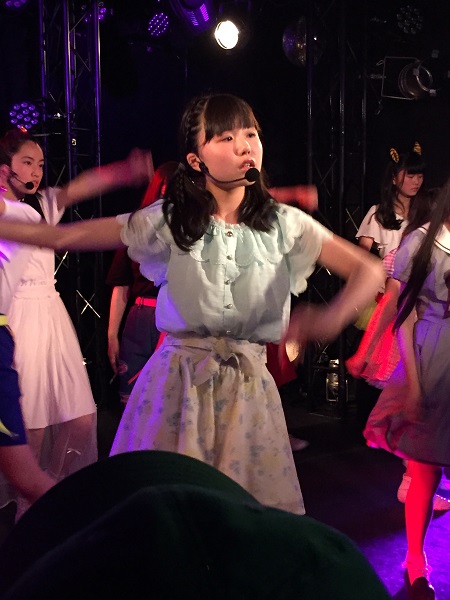 Yuua (Inoue Azumi song) I had to ask Yuua about the artist since I had never heard of her before. It was a standard pop song. Like Miyabi, Yuua did a great job.

Rina (???) I have no idea what pop song this was, or who the artist was, but Rinacchi was awesome! It is becoming apparent when it comes to singing, she is an absolute ace, and I expect her to be taking an even more front-line position in this group going forward.

The girls collectively asked how they did, and the audience gave them an enthusiastic response. Next, it was time for games and contests. The first was a batsu/prize game featuring that infamous “box” with a mystery item that the audience can see, but the girls can’t. They had to guess what was in the box. Now, this had the potential to be a hysterically funny segment, except Miyabi led off, and with no fear shoved her hands in there and started to feel around. She pretty much gave away that it wasn’t anything scary (although she wasn’t sure what it was) so the rest were all pretty much fearless in doing this too. Eventually most of the girls figured out what it was, and in unison revealed it was corn on the cob, LOL. The winners all got cotton candy, while the losers had to do something silly on twitter later on.

The next segment was the fan prize contest. Usually it’s signed photos, a framed picture, goods. But this one was really weird. It was basically like a garage sale. The girls were giving away a personal item. It was all very random (a pencil box, throw pillow, compact mirror) This was one time I sincerely hoped I didn’t win, and thankfully I didn’t. They did one more song, which was the photo-op portion of the show. I did get a few nice shots being close to the stage. Unfortunately I was far from Ramu-kyun, and didn’t get any real good shots of her. After this they left the stage.

The encore chant didn’t last very long before they came back out and sang their upcoming single Kirari ☆ Yume Ondo. Afterwards it was time for announcements. The first announcement had to do with the future of their monthly one-man lives. They are skipping June since they will be doing single release festivities instead. However, in July and August they will be moving their monthly show to Shinjuku Marz, which is a club I have never been to. Although I have eaten at the restaurant on top of it a few times. (Sekai no Yamachan) The last announcement was they will be doing a performance in Korea. They were all really excited about that. In fact they were all so excited that Izumin bumped her head and had to be taken off-stage for a few moments. After seeing the debut of the new full PV, they finished the live with their standard Ureshii Namida.

The above video is the 30-second TV Spot for the upcoming single.  You get the gist of the entie video from the preview, but what they don’t show is some of the graphics they use to ID the members, and show what they are shouting in spots (Think the old Batman TV show)  It’s a pretty fierce PV, and I love the outfits.

I was greeted by Yuua’s mom in the beginning of the show, and by both Miyabi and Izumi’s moms afterwards. There was another mom there who I had never seen before. She was kinda young and petite. Ramukyun’s mom? Maybe Yutori’s? I didn’t ask. I hadn’t yet bought goods, and wasn’t sure what I wanted to get. My original plan was to get a second t-shirt and a couple of buttons, which would afford me two signed chekis. However, they ran out of buttons, and there was nothing else on the main table I wanted. They had a separate single pre-order table, where you got a signed cheki for every two singles you bought. (Well, each cheki is one ticket, and each signing is one ticket) Since the pick-up shop was HMV Shibuya, I decided to go that route. I would be getting a signed cheki for both Yuua and Miyabi. I would love to get one for Ramukyun too, but I have to limit myself, and as much as I love Ramukyun she is third-banana in this group for me. 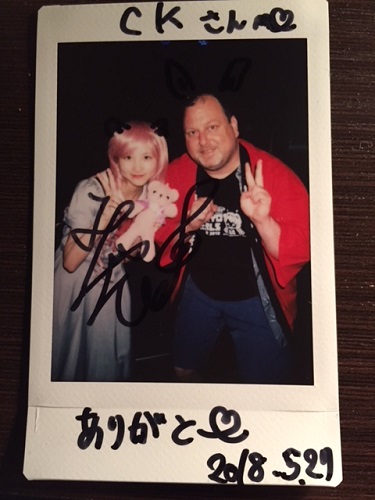 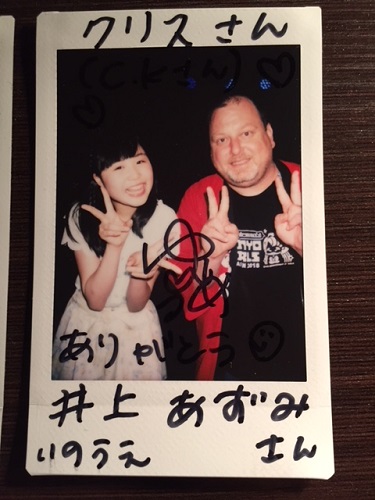 They do the photos and the signing in two separate processes. Oh, and they now also offer a shamekai option. Oh, and their newest kenkyuusei Ryou was helping run the cheki process. She is so tiny, but she is very outgoing. I was surprised. Between the two segments I went outside to get some air, Miyabi’s mom was like “You’re leaving?” No, I’ll be back in a few minutes! I did the signings pretty much consecutively. I asked Miyabi if she was a big Namie Amuro fan. She was like “Huh?” but Yuua heard me and asked her on my behalf. She was kinda non-committal about it, LOLZ. This was also when I asked Yuua the name of the artist she sang. When it was my turn with Yuua, I told her that I missed seeing her when the group went to Kamisato, which is close to where she is from. I assumed she was busy. She was like “Yeah, I wasn’t there, but I live close” Yeah, I know that. Rinacchi was right next to her, so I took the opportunity to tell her that I thought her performance was great. She smiled and thanked me, and then Rio nudged her shoulder as if to say “You see? You were good!” LOLZ. 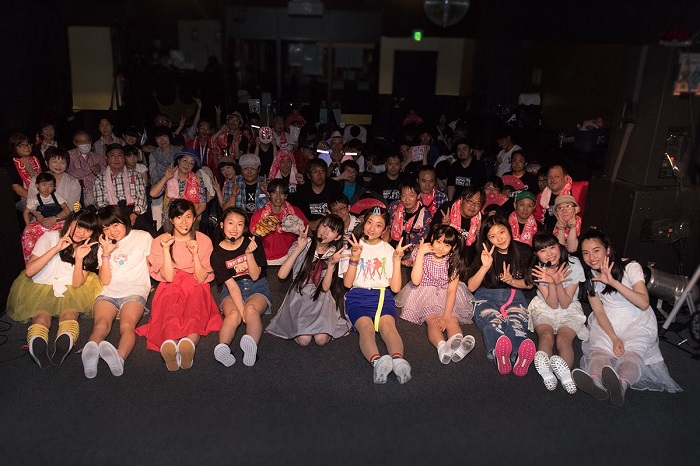 I should be pretty easy to find

With that I left to have lunch, and go to Wasamin’s mini-live in Minowa. (Which you can read about in the Wasamin thread) Not sure when my next encounter with the Minyos will take place. I’ll have to check the schedule.