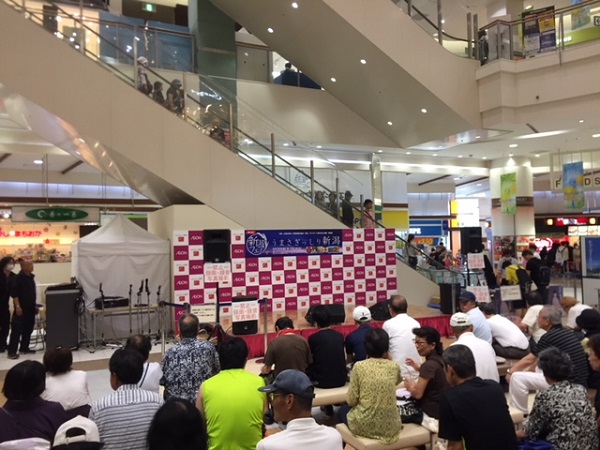 As far as Wasamin goes, absence definitely makes the heart grow fonder. It had been two weeks since I saw her ‘Virtual Reality’ concert in Yokohama, and her schedule over the next month or so was peppered with events in Kansai, Chubu, Tohoku and Kyushu. Not to mention, I missed out on her Ginza Enka Fes. appearance since I had class that evening. So I had earmarked this event as a “must-go.” After all, I live close to Saitama, so this was just a short train ride away.

I decided to head out early, figuring I could possibly reserve a seat for the event, and get lunch in the mall. (I was really in the mood for cold udon) BTW, Summer has finally “arrived” here in Tokyo, and the last 3-4 days have been hot, humid, and windy. With that in mind, instead of wearing my Wasa-gear, I decided to wear some of my lightest clothing. I wanted to be as comfortable as possible, especially since the mall is a bit of a trek from Kita-Toda station, so I knew I would be walking in the heat. I arrived just before noon, and immediately scouted the place for lunch.

What I didn’t take into account was the special event going on at the mall.  This was part of the reason Wasamin was invited to perform at this venue. They were holding a “Niigata Fair” to promote Niigata tourism. I guess they felt Wasamin’s 7th single, Sado no Ondeko, which is about Niigata Prefecture, would be appropriate for the event. Makes sense. So Wasamin was only part of the promotions going on in the mall. They had all sorts of games, other performers from Niigata, and of course….mascots. 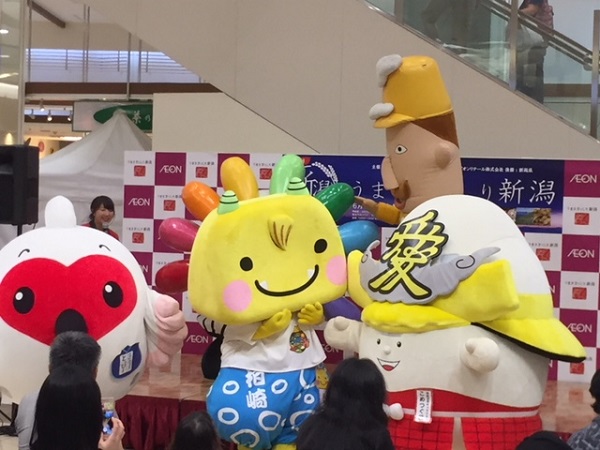 It’s funny watching kids react to mascots, they either love them, or they are scared to death of them. That tall one with the mustache seemed to be the best at scaring the heck out of the little kids. There was tons of screaming and crying going on, LOL. Anyway, since it seemed like the local geriatric crowd had camped out most of the seats for the day, I camped out in a cafe until showtime. (I have a ton of Kanji to memorize by tomorrow) Wasamin was doing two mini-live performances, and here are the setlists…

Six songs! Wasamin has been doing these ‘extra-long’ setlists a bit lately. Not every time, but usually when it is some kind of special promotion. She sings songs #2-4 in a row, without an MC, so ultimately she does the same amount of talking as a 4-song setlist. Plus, she sang two of the c/w tracks from the new single. Osaka Rhapsody is particularly fun. Not to mention, Niji wo Watatte and Ginza Kankan Musume are among my favorite songs she performs, so all in all it was a great set of songs today.

I pre-ordered 3 copies of the upcoming release, one of each type. I am in sort of a quandary with these pre-orders. The new release is scheduled for August 8th. I have (extremely) tentative plans to go to California in August. and since I live alone I cannot have CD orders coming to my house just after I leave town. So I have been ordering for “pick-up” rather than delivery. This means I am going to have to trek all over the place to get these singles at some point. But I’ll deal with that when the time comes. I used two tickets for the first event, and got a two-shot… 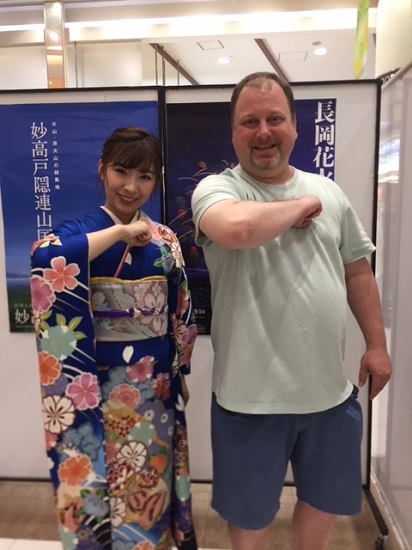 Wasamin asked what the pose was, and I mentioned it is part of her Sado no Ondeko routine. Afterwards, I mentioned I have three big Kanji tests tomorrow, and I had been spending most of the afternoon studying in the cafe across from the stage. When I came back to use my last ticket, I showed her all of the practice kanji I had been writing. She immediately pointed to 歌手 (Kashu) and said “That’s me!” I told her that when I think of the “song” kanji, I think of her standing in front of two microphones. In the meantime her manager said that was a lot of kanji to learn. Don’t I know it! Anyway, Wasamin wished me luck on the tests tomorrow. After a quick trip into Aeon Market to grab a few things, I sat down and watched the mascots while waiting for Wasamin to finish her handshake event, and then we all headed back to the station, and home.

As I said, Wasamin is spending a lot of time out of town this month. But checking her schedule, she is performing at the Hawaii Fest in Tokyo on the 14th (along with Minyo Girls) Plus, I am pretty sure I can make it to her ‘last’ Challenge Campaign event on the 25th. According to Ichikawa-san, they are taking a temporary hiatus from the monthly challenge campaign, although I got the ominous feeling that it will be quite a while before she starts doing it again. We’ll see. She has one other Tokyo event in July, but I think it conflicts with some other event I have tickets for. Nevertheless, at least I will be seeing her every 10 days or so, just enough to keep things fresh.