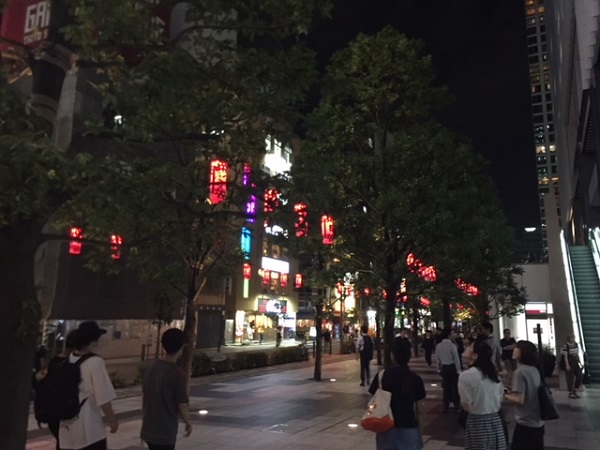 Lanterns line the outside of the UDX building behind the Donki, bringing a very festive atmosphere to Akiba

Things are beginning to look up, ticket center-wise. It had been slightly more than two weeks since my last cancel machi (and eventual theater win) for AKB’s Idol Chugyou Chuu! stage, and after waking up Wednesday morning I saw the email that had again won cancel machi for Friday Night.  It was a great number. (#6) With a cancel machi number that low, I would undoubtedly win. In fact, when I checked my ticket center account, it already said that I had won the show, which meant at least six people had cancelled overnight. Yatta! This was going to be my 43rd Theater Show!

So of course I was excited to be seeing Ranchan again. I just hoped that I would get a good draw in to the theater so I was close to the stage. Fast-forward to Friday; I headed over to Akihabara in the mid-afternoon after sweating (both literally and figuratively) my way through three Kanji tests. My brain felt like jelly, so I looked forward to blowing off some steam in the theater. But first I headed over to The Hub for a couple of pre-show cocktails. Eventually I made it over to the theater. I was kinda hoping to get a high lottery number, since I have noticed the times I have been in the theater that the high numbers are often called early. I mean it is supposed to be completely random, but personally when I get a good draw-in, it is often with a high number. The theater wasn’t very crowded at all, so I stored my backpack, and eventually queued up to buy my ticket. I had ticket #121, which meant when my group was called I would be the 2nd person in.

They also had some sort of special event in the lobby, where Inagaki, Yasuda, and  Suzuki Kurumi came out and did a Dare ka no Tame ni donation collection with the fans. I was a bit out of position, so I didn’t get to participate, but everyone cheered for them. It all took about a minute or two. Eventually it was time to call the lottery for seat draw…

Okay, I should at least be able to get a seat. How good a seat though? It didn’t help that I set off the metal detector for some inexplicable reason, which slightly delayed my entrance. I wanted to be on the left side of the stage, but that section was beginning to fill up. I wasn’t sure, but the right side seemed relatively empty, so I walked to the other side. Sure enough, only the first row was taken on the right, so I headed over to the second row. First I took the inside seat, but it was next to the pillar, and blocked half the stage, so I moved to the far end of the row, next to that little side stage the girls sometimes dance on. It was further from the center, but a much better view. I brought a lightstick for a change, so I was ready to go. Eventually we heard the Kage-ana, and the overture, it was showtime!

Per usual, since most of you are fairly well-versed in the stage setlists and such, I will focus on my impression of the members. Obviously my focus will be on Ranchan. But I have cultivated a bit of familiarity with many of the 16th gen girls in this show, and there are a couple other draftees I kinda like too, and since Ranchan was going to be on the opposite side of the stage for a lot of the show, I could focus on other members for a bit. So let’s start with…. 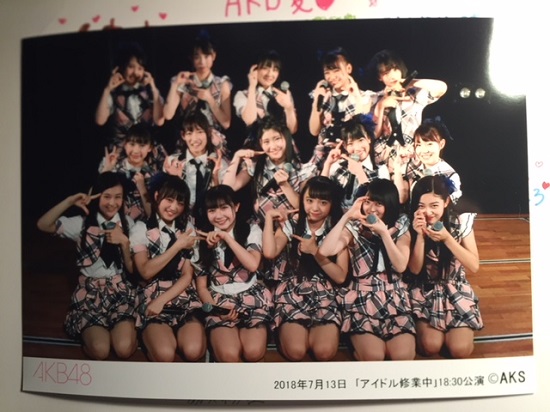 Members who fished me:

Tada Kyoka: I had never really noticed her before, but I got a closeup view of her last week at the handshake event since her lane was next to Zunchan. She always has a big smile on her face and is often ‘working’ the audience members. She looked at me quite often during the show, and more than once mimicked my response. She’s really not my type of idol, but I gotta give her points for the effort.

Yasuda Kana & Inagaki Kaori: I have been interacting with these two for quite a while now, and Kana is always scanning the audience for who she can fish, she is super-energetic and genki. I have to give her credit for being one of the most dynamic girls on the stage. Inagaki, kinda like Suzuki Kurumi, has really blossomed since I started seeing both of them in the ‘Let’s Go Kenkyuusei’ stage. I am also amazed how popular she is. Inagaki easily gets the loudest reactions throughout the show. Speaking of reactions…

Member who made a big impression…on somebody

Taguchi Manaka: I didn’t even see her name on the performance roster, but she was there, and it seems like she gets at least close to center position on many of the songs. She was also getting great audience reactions. She seems to be a good singer, but I have personally never been drawn to her. She also does an amazing job centering Tsundere!

Otake Hitomi: Okay, I have to admit, I find this girl totally hawt. Adorable face, nice figure, great energy and dancing on the stage. She is a lot of fun to watch. I found myself suddenly really wanting to meet her at a handshake event. There is just something about her face, she looks mature and cutesy-kawaii at the same time. Just my type, sexy and cute. And, she has a husky voice. Love it!

Honda Sora: So yeah, I have been talking up both Hitomi and Sora since the first time I saw the draftees perform, and I have had the same impression each time. Both of them are really cute, and have great stage presence and energy. I actually expect good things from both of them in AKB’s future.

Katsumata Saori: This is the first time I had ever noticed her, but she was in front of me quite often during the show, and I found myself drawn to her stage presence more than once.  She reminds me a bit of HKT48’s Yamamoto Mao.

Kobayashi Ran (Ran-chan!) I was there to root for Ranchan, but could only get a peripheral look at her for the first half of the show. She slid over to my side a couple times, but only briefly, and our eyes didn’t meet. It wasn’t until Saishuu Bell ga Naru that our eyes finally met, and she locked onto me for a good 5 seconds or so. It was awesome, totally focused on me. From that point forward, she would find me whenever she slid over to my side of the stage. A nice setup for when I meet up with her at the handshake event next weekend.

Notes on other members…

I am used to getting fished by Taya Misaki, but she left me alone for the most part, despite being in front of me for much of the show. Yahagi Moeka did not get as big an ovation as I am used to her getting, and I noticed she fiddles around with her outfit a lot when the MCs aren’t focused on her. But per usual, her singing is top notch. This was the first time I had seen Okada Rina, and she seemed like she wasn’t too comfortable on stage. In fact, her introduction MC was one of the shortest I have ever seen. Oddly enough, she sorta reminds me of a young Meetan.

I wasn’t in the front row, and I wasn’t in the center, but 2nd row far right does have its perks. Probably the biggest is when the girls go to the side stage. At that point my seat becomes temporarily a front-row seat. This is particularly evident during Shinkirou, where Inagaki did her first verse just a couple meters away from me. But the members also dance on the side during Kanojo ni Naremasuka and Sobukasu no Kiss, so I was in a great position for that. I also want to echo what @Riina said a couple weeks ago. The black, red, and silver outfits the members wear for RIVER are awesome!

Eventually the show ended, and it was time for “High Wave,” as I like to call it. I get the usual enthusiastic, and sometimes English greetings. I also tried to make a connection with Hitomi, but I blew past her fairly quickly. I was really waiting to get to Ranchan, who was second from the end. Of course it was my best reaction, and we are really connecting now that she has seen me at three shows and multiple handshake events. I feel sorry for Tacchan though, who was at the end. I was so focused on Ran, that I pretty much ignored her. Oh well. 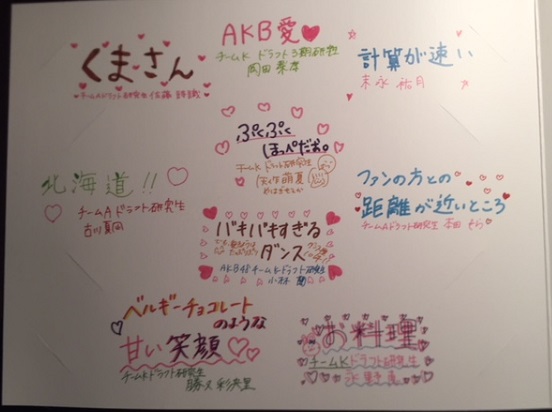 I headed out to buy the Group pic, and it wasn’t until I got home that I saw the inside has little messages from all the performing members. Another really nice touch, which to me has become an essential part of the theater experience. I am developing a small collection of those Team Picture booklets.

My next scheduled 48-group events are the Teacher Teacher handshake event next weekend, and then HKT’s handshake event in early August. I also have an application in for the #17-#100 SSK thank you concert at Yokohama Arena. We’ll see how good my luck is on that one. In the meantime, this will be a busy weekend as I am seeing both Wasamin and Minyo Girls. Should be a lot of fun.