When I say wild, I mean a lot of interesting things went on with the Mingaru’s two appearances this weekend. First off was their appearance along with Wasamin at the Oedo Hawaii Festival in Nihonbashi. I had planned on meeting some friends, as well as the Wasafans for this event. Minyo Girls would be performing first, on the 1st floor of Belle Salle, and Wasamin would be performing 40 minutes later on the B1 level, which was actually inside Nihonbashi Station. The actual festival was happening on the B2 level, and cost 1000 yen to get in. So lucky for me I avoided having to pay any admission…

The problem was that Tokyo is in the middle of a tremendous heatwave. Not only that, it is extremely humid, which makes any outdoor activity quite the challenge. Minyo Girls were actually scheduled to perform outside. Which brings me to the prediction I made a couple months ago. In a previous post back when the girls performed with Wasamin in Saitama. I mentioned that their new costumes would be hell to wear at any outdoor Summer activities. This pretty much came true. It was supposed to be a full group show, but Ramukyun was announced as cancelling her appearance in the morning. A short time later, Rio was announced as out for the show, and just before showtime Miyabi was announced as out sick for the show. In fact, I sorta witnessed the drama around Miyabi, especially since I am friendly with her mom. Mom was called backstage, and a short time later she came out and started apologizing to everyone. 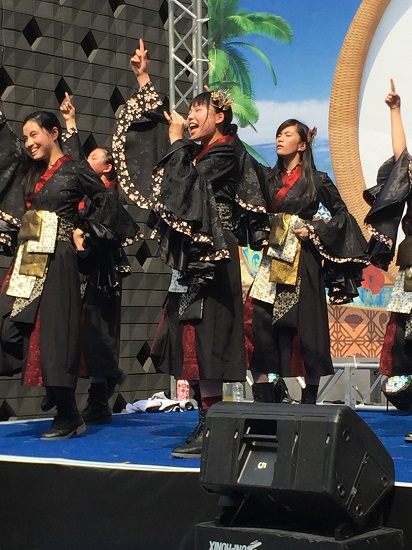 So the seven remaining members, plus Ryo, their one kenkyuusei, came out and did a shortened version of their performance. It was only around four songs, and they were sucking down water in-between each song. I felt bad, since the friend I was with was seeing them for the very first time. But with the heat, and the sudden lineup changes, they were really off their game. They didn’t do their intro properly, which I think is a cute feature of their act. The first song (Akita Ondo) sounded good, but the other three they sang all sounded off. The entire time I sat there I was just wondering how uncomfortable they were.

Taking all that into account, and since it was a free live, plus two of my three favorite members were out, I really didn’t mind the abridged setlist which was mainly songs from the single release. In fact, I didn’t even stick around for goods, chekis, and whatnot. Instead I headed down to the far cooler B1 level where Wasamin was about to perform. By the way, the reason I was so nonchalant about missing on goods and benefits, aside from the fact that Miyabi (and Ramukyun) were out was because Minyo Girls would be performing their one-man live the next day in Shinjuku. So I figured I’d save my energy (and money) for that. However, I did send Miyabi-chan a tweet telling her I hope she feels better. 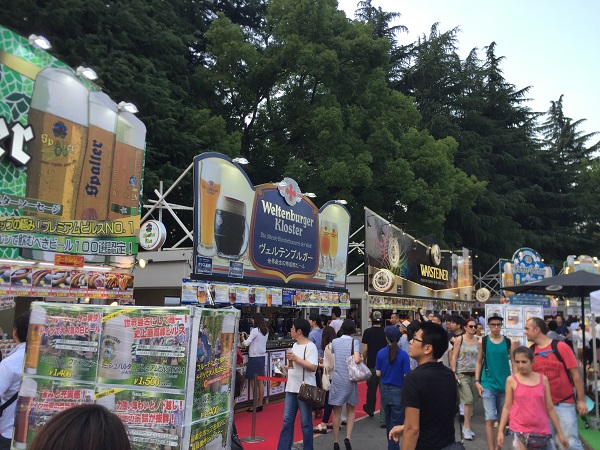 In the meantime, my friend and I headed over to Oktoberfest in nearby Hibiya. We ended up being there for around six hours, but I was very conscious about how much beer I was drinking because I didn’t want to be hungover for the Minyo’s solo live on Sunday. 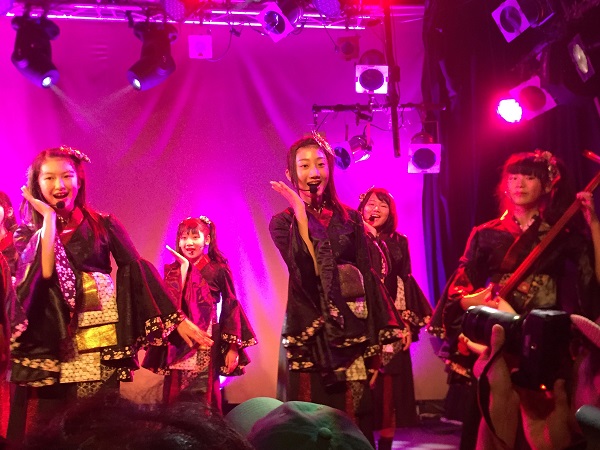 So my strategy paid off. I avoided drinking too much on Saturday night, and was good to go for the girls’ Sunday morning Solo Live. The group has been doing their monthly solo live in Asakusa for the past six months or so, but have changed that up for Shinjuku in the coming months. Why? I am not sure. It is technically not a bigger venue, and the stage seems slightly smaller. Perhaps it is less expensive? I am not sure, but I can say the tickets were considerably more expensive. I knew exactly where the club was since I have eaten at the izakaya above it (Sekai no Yamachan) on many occasions. Despite the fact that we had entry order numbers, I didn’t want to arrive early just to stand outside in the even more oppressive heat and humidity than the previous day. Luckily when I arrived they were already queueing everyone, and my spot was just inside the doorway in the shade.

Shinjuku Marz is not dissimilar from Shibuya Glad in that you enter the venue on a small balcony, and then go down a level to the floor-standing area, although Marz’ balcony is considerably smaller than Glad’s, quite a few people did watch the show from there. Also, since Minyo Girls always have a lot of family in attendance, there is a seating area on the far left mainly used by grandparents and siblings. (A few of these girls have very young brothers and sisters) I even got the opportunity to meet Miyabi’s grandmother. I told her that Miyabi is a great singer, and that I am glad she was feeling well today. 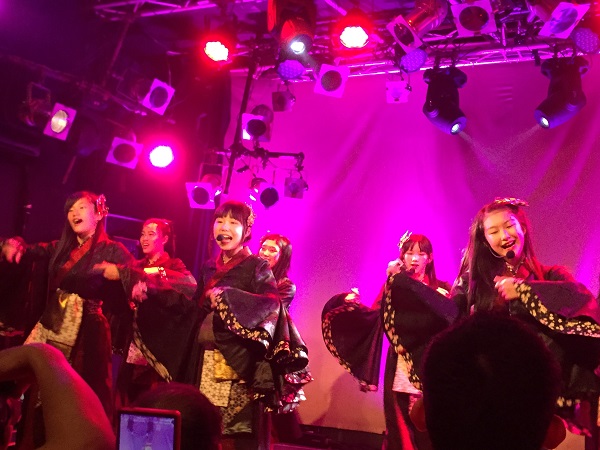 The good news was that none of the members were worse from wear the previous day, so we would be seeing the full group. After grabbing my prerequisite beverage (Oolong Cha) I took a spot three back from the stage. They were playing the new single music video on the giant screen behind the stage, and the show got off a little late. Also, the air-conditioning was on full-blast, so the place felt quite cool. Although when I stood very close to the AC unit upstairs I could sense the faint smell of mold.

Mingaru often “theme” their one-man live shows. This one was mainly Minyo-style songs in the beginning, and then it turned into a tribute to the Minyo Girls II EP. I love the second EP, so I was good to go. Moreover, I was so relieved that their performance skills were back on track today since the previous day was kind of a small disaster, LOL. Also, it was a very long show. They sang a lot of songs, and the encore was quite long too, I think 4-5 songs plus two long MCs. 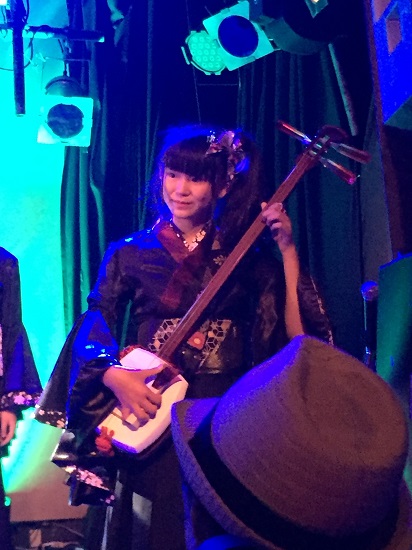 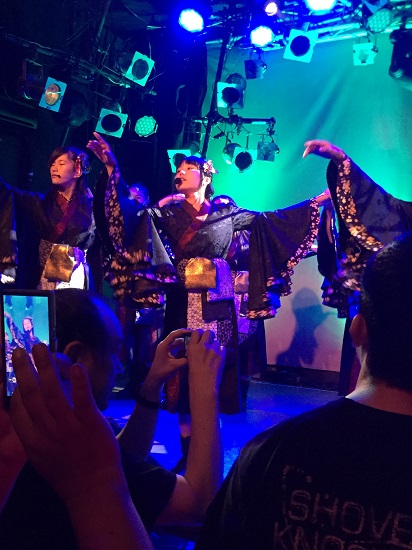 They allow photography for two songs in the early part of the show. I used to have a difficult time getting my pics to come out properly, and I think others had the same issue since the past couple of shows I notice they change the lighting for this part. My pics look a lot better as a result. I was on the right side, which meant I had Rio, Matsuri, and Ramukyun right in front of me. The awesome thing about Ramukyun is the way she reacts when you smile at her. I think she has probably been told she needs to smile more, since nearly every time I smiled at her she would instinctively smile back. It is so cute. On the other hand, Miyabi (and Yutori) were both relegated to the back row for this entire segment, so getting good pics of them was a bit difficult. I also had a tall guy between me and Yuua, so that was an issue. But oh well. I got a few good group shots. 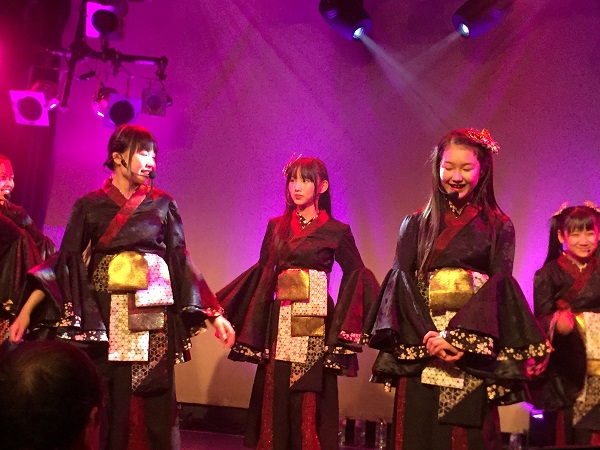 As has been a tradition at the 1-man shows, they had a VTR with announcements during the encore. We all have to kneel down for this (which kills my knees, BTW) They did a retrospective of all their releases, which some great early group footage, followed by an announcement of more 1-man live events in the fall. But the big announcement was the promotion of their one kenkyuusei, Ryo to a full-fledged member. It was cute how they did it too. The manager came out and presented her with a proper costume.  Nikkan Sports wrote an article about it…
https://www.nikkansports.com/entertainment/news/201807150000700.html 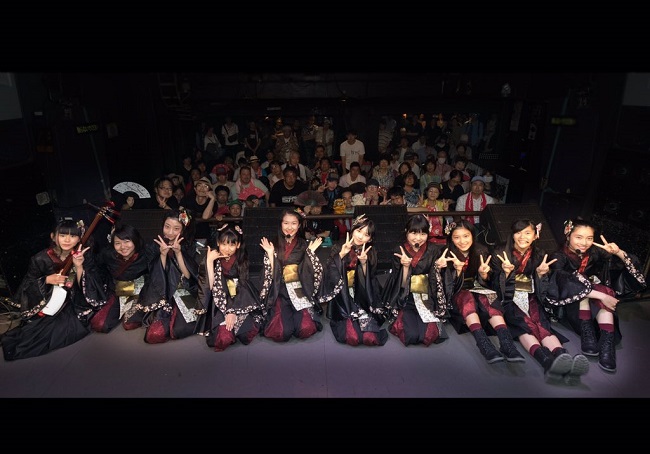 I waited to buy goods until after the show, and there was a bit of a mix-up, thanks to 1) my non-fluent Japanese, and 2) Mingaru’s complicated system. You see, how many tickets you get, and what kind of tickets you get, depends on not only how much you spend, but what items you buy. This totally confuses the process where it used to be “spend XX yen, get XX tickets.” So I spent 4000 yen on goods, and only got one ticket. This wasn’t what I wanted. Not to mention, I specifically bought something I didn’t really want just to get to the 4000 yen mark. I couldn’t explain my problem on the fly, so I told her I would come back. In the meantime I tried to explain it to one of the other staff, who understood, but told me I would have to explain it all to the people in the goods booth. Jeez! The big issue was that I wanted to return the second thing I bought, since it didn’t get me the second ticket I wanted. Eventually the guy behind the counter understood what I was getting at, and let me return the item. I bought something else, and had my two tickets. One was for a signed cheki, the other for a shamekai. 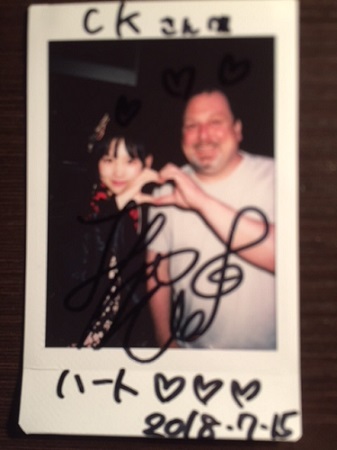 I used my first ticket on Miyabi. The first thing she did was thank me for the “get well” message I sent her the previous evening. I told her I was worried, but was glad she felt better. The rest of the time I essentially talked about the heat. 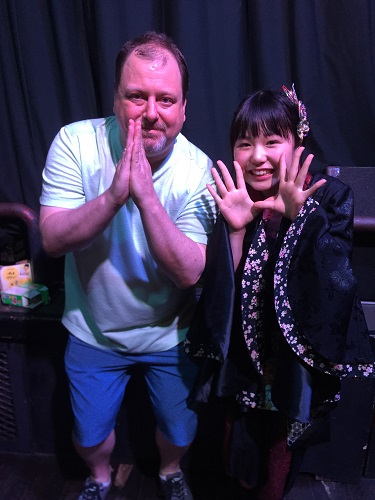 Which was the same thing I talked about with Yuua. I seriously considered using my second ticket on Ramukyun, but she and Yuua were right next to each other, so I just could not do it. I really want to discuss Ramu being an AKB fan though. Not to mention she reacts to me while on stage all the time.

And with that I took off. I had to return to Oktoberfest since I had purchased in IQOS there the previous evening, which was defective. So I wanted to bring it back so they could either fix it, or give me a new one. They gave me a new one. But it was yet another interaction where I had to explain my problem all in Japanese. And since I came all the way to Oktoberfest, might as well have a couple beers. Frankly, after all the explaining and complaining and whatnot, I really needed a drink!