First of all, let’s all congratulate Wasamin, for this weekend she surpassed 500 singing events. She has been a soloist for 6 1/2 years now, which means she has averaged over 75 mini-lives per year. When you think about it that’s pretty incredible, eh? So…

So it should be no surprise that Wasamin was quite busy this weekend with five mini-live events at three locations. Saturday was in Central Tokyo, Sunday in Western Tokyo, and then jumping up to Sendai for the Monday Holiday. I was only able to make it to the Saturday event since I had concert tickets for Sunday. Technically, I could have made it to her late performance in Western Tokyo, but I didn’t want to travel an hour and change to just see the last show.

I arrived at the Oedo Hawaii Festival 90 minutes early since I was supposed to be meeting friends there, and Minyo Girls was performing 40 minutes before Wasamin on the outdoor stage. I looked for exit B6 at Nihonbashi Station, since that’s where the Belle Salle building was, and to my surprise, the stage was practically IN THE SUBWAY STATION! It’s another really cool aspect about Japan. At many of the stations, the surrounding buildings and stores have underground entrances in the station, so you never have to go outside. It’s nice during extreme weather, and some of them have very nice restaurants and shops. Anyway, the Belle Salle exit opened up into a large stage area, flanked by a row of restaurants and a department store. Since it was the Hawaii Festival, most of the performers were performing the Hula and Ukulele music. I’m not not sure how Enka fits in, but whatever.

One of my two friends showed up, and we went upstairs to watch Minyo Girls on the outside stage. You can read my report of the Minyo Girls performance on the previous post, but suffice it to say it was scorching outside. The girls were definitely suffering. The members who dared perform (three of them cancelled out) were gulping down water every chance they had. I didn’t stick around for the chekis and stuff, instead going back downstairs to wait for Wasamin where it was MUCH cooler…

Wasamin threw in an additional song since it was a festival, and due to the heat she themed it out for Summer. That’s good since both of those ‘Natsu’ songs are fun to hear her perform, and of course most of her MCs involved the oppressive heat outside. 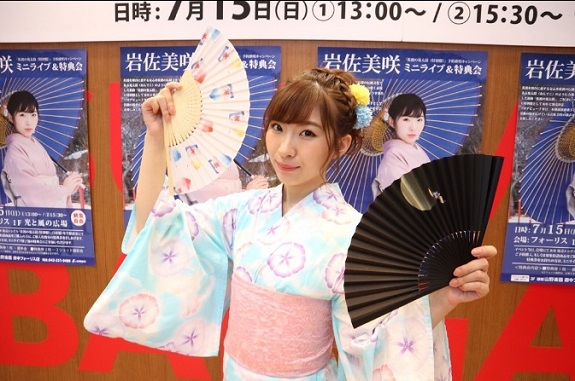 She has been consistently wearing her Royal Blue Kimono for a while now, but this weekend changed into some lighter colored outfits I would imagine to be more comfortable. She wore a light blue Kimono at the Hawaii fest, and switched to an off-white Kimono in Western Tokyo.

Since I was sweaty from the heat, I decided I didn’t want a shamekai, instead just getting one ticket for a handshake. I happened to be wearing a Hawaiian styled shirt, which I pointed out to Wasamin. She asked if I bought it in Hawaii, although I actually purchased it in California. But I told her I do love Hawaii and had been there on multiple occasions. My friend, who is a Sasshi fan, asked her about the ‘Trip to Hawaii’ she supposedly won at the infamous 2010 Aki Matsuri Concert. She confirmed what we all know, that she never received her trip. My friend offered to get Sasshi on the case for her, but Wasamin was like “No, no, she’s not involved!” LOL.

My other friend didn’t make it, oh well. But Robert and I took off right after our handshakes to go to Oktoberfest which was nearby. We were excited not only for the beer, but for the Austrian party band, which we had seen before and really liked. In fact, we ended up hanging out with the band after their performance. So it was a long day.

Oh, and here are the setlists for her Western Tokyo lives (I haven’t seen the Sendai setlists posted yet)

Wasamin is spending the next two weekends in Gifu, Nagoya, and Shizuoka, although she has her Chiba “challenge campaign” sandwiched in there too. However, the first half of August is filled with Wasamin events around Tokyo. So plenty of opportunities to see her if you are in town.