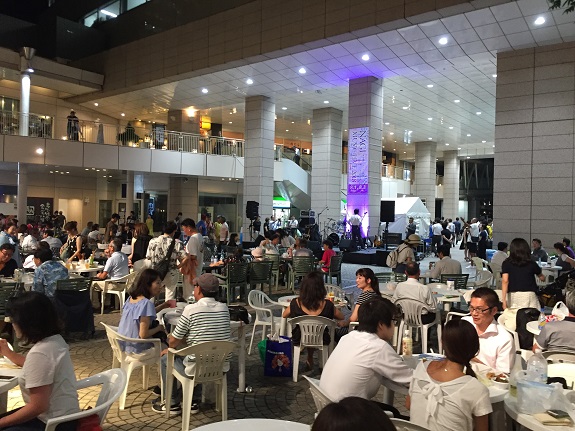 I was itching to see Wasamin since I missed the “all day Wasamin” day earlier this week, where she did two live radio shows and a record shop appearance in various parts of Tokyo and Saitama. Unfortunately it was right in the middle of my finals. But since finals are now over, and I am officially on vacation for almost five weeks, I had nothing stopping me from spending the evening in Tennozu Isle. In fact, I had a specific plan in mind. I would head down a bit early, go have a brew or two for Happy Hour at T.Y. Harbor, and then head over to the performance. However, the plans got changed. When I arrived in the shopping complex where the music festival was being set up, a bunch of Wasafans had already staked out the front and center tables. Since they had food and drinks on site, I decided to change my plans, grab a primo seat, and just enjoy the evening there….

And it was PERFECT timing, as I arrived just as Wasamin was starting her rehearsal. So I got to watch her “casual” (in street clothes) version of Hatsuzake. She had cute little denim shorts on and a black top.

This was the final day of the three day “festival.” (Minyo Girls performed there on Wednesday) Wasamin was the second performer out of four on the Friday night bill. I had never heard of any of these groups, although the last one seemed to be well known. In fact, all the groups had their own little following. The most interesting was the band on right after Wasamin, which was a Beatles cover group. They had the look down; great suits, the same guitars and drum kit. However, they honestly weren’t very good. But this is supposed to be about Wasamin…. 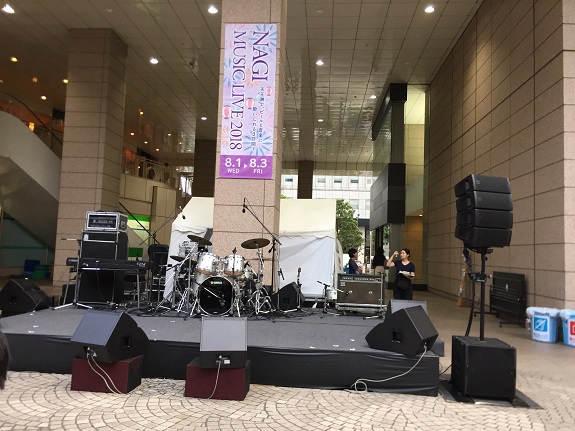 After having some Indian grub, a couple of beers, and watching the first band, it was finally Wasa-time. Misaki-chan had changed into her light blue Kimono. By ow there were lots of Wasafans crowded in the front, most of whom had at least a beer or two in them. We were ready to go. Here is the six-song setlist…

As expected, the fans were kinda rowdy. Wasamin was reacting, and the rest of the people at the event were getting a kick out of us. They had one technical screw up. Wasamin was supposed to sing songs 2-4 right in a row, but the soundboard guy didn’t start Ringo no Uta. Misaki stood there with a funny look on her face for a few moments, and then tried to cover with an MC, basically saying that there wasn’t supposed to be an MC at that point. It all got ironed out within a minute or so. Also, this was a great setlist for a festival crowd, since KFC is a song most everyone knows, and Niji wo Watatte has a great fan chant part in the verse.

After the show Wasamin was doing handshakes and 2-shots behind the stage. I had two tickets, which were good for one 2-shot. I thought about pressing her about the “DD” issue we talked about last week, I also considered mentioning the previous group singing “Sweet Memories” which is a song Wasamin also performs on occasion. However, I decided to stick with telling her my grades for the previous semester. She congratulated me on the “A” I received in my Japan History Intensive (from Meiji Restoration to WWII) 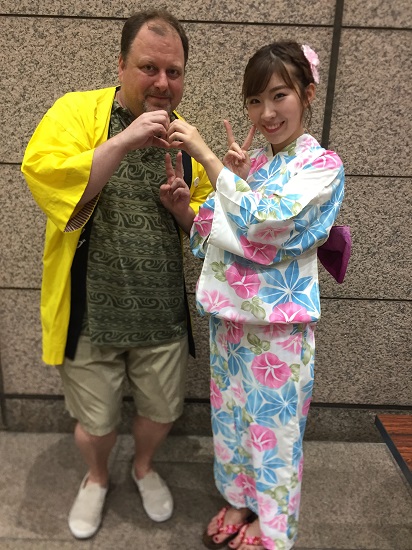 Wasa-toes made it onto the picture!

That was enough for now. I went over and watched a little of the Beatles cover band while everyone finished their handshakes. Wasamin has a whole bunch of events coming up next week for the re-release of Sado no Ondeko, so there will be plenty of opportunities to interact with her in the coming days. In the meantime HKT’s handshake event is tomorrow (Saturday) I am looking forward to discussing Yukachan’s Janken duo with Inagaki Kaori, but don’t tell Wasamin that.