I had just left Minyo Girls’ One-Man Live at Shinjuku Marz, and was trying to decide what to do with the rest of my Sunday afternoon.  After grabbing lunch at Taiyou no Tomato Men, I decided to see what films were playing upstairs at Toho Cinema.  It’s that big movie theater with the giant Godzilla head on the roof.  I wasn’t too interested in seeing the new Mission Impossible film.  It was sold out for the next six hours anyway.  I would like to see Gintama 2 since I saw the first one and liked it.  Plus, it has Hashimoto Kanna in it.  But again, the next available showing was almost 3 hours away.  Ultimately I decided to go with my original plan.  I wasn’t totally in the mood for the hassle of going out to Odaiba, but I hadn’t seen KissBee in quite a while, so I should probably go pay my respects to Misaki-chan (KissBee’s Misaki-chan, not Wasamin)  I had over four hours to kill before their live, and had no idea how I was going to spend it…

Ahhh, Sunday at Diver City.  What a mess!  The mall is packed, every restaurant and cafe is packed, there is pretty much a line for everything.  I decided to sit in Krispy Kreme for a while, sipping an iced tea and reading a book.  But they were packed with people, including what sounded like a dozen screaming infants.  I couldn’t concentrate so I decided to do a little bit of shopping to kill time.  Eventually I found myself heading to Tully’s for an iced coffee.  Perhaps they would have a quieter atmosphere.  As I stepped outside I heard a familiar tune.  I had no idea they wee also performing at Diver City, but I looked down to the floor below, and there they were singing Zenkai Hero…

It has been over two years since I have seen an Alice Project group, or have gone to PARMS, their theater in Akihabara.  Ever since my favorite member Himeri quit, I resolved never to go there again.  But Zenkai Hero (along with Mirai no Hikari) is one of my all-time favorite Kamen Joshi songs, so I headed straight down and jumped into the crowd.  Even when I used to go to PARMS I rarely saw the flagship group, so I didn’t really recognize any specific members other than Tachibana Anna. An interesting note, between the masks and the high-energy setlist they drew a lot of passers-by over to watch the show, including a significant number of foreigners.  Here’s a video of the Zenkai Hero performance, with an “interesting” fellow walking down the steps behind the stage at 2:30 (hehe)

A cute little side story; At one point they brought a young girl up on stage to try and break open a watermelon. Originally they had her blindfolded, trying to break the it with a wooden stick. That didn’t go very well, so they eventually took the blindfold off, and then helped her with the stick until finally she cracked a hole in it. 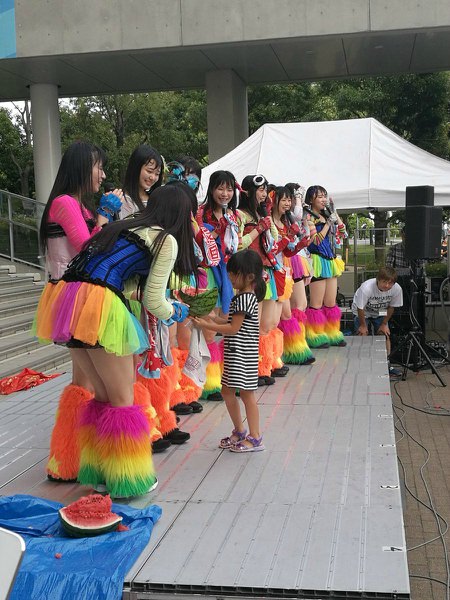 I was trying to decide whether I wanted to spring for a cheki or a handshake, when I noticed the CDs they were selling are all ancient. Don’t Alice Juban ever release CDs? And they don’t sell any of their early indie singles, which is what I would be more interested in.  I was saying to a couple of the KissBee fans that I see used copies of these singles in used bins at Akiba reisellers for like 100 yen, LOL. I ultimately relented though, and bought two 500 yen copies to get a cheki. But before that…

I went through their free “High Touch” line, and of course got a lot of “Wow a foreigner” reactions. However, when I got to Kojima Yuuka she wouldn’t touch my hands. She just gave me a thumbs up. I went to give her a high-five like I did with everyone else, and she kinda pulled back. So I also pulled back, and she laughed. I don’t know what was up with that, as I later saw her high-fiving other people. Perhaps she found me repulsive? Anyway…

When I went to take the cheki, I had decided I would choose Anna since she was the one girl I knew. I did consider picking Kojima just to mess with her. But the manager asked if I wanted to do a full-group cheki. Well, okay. 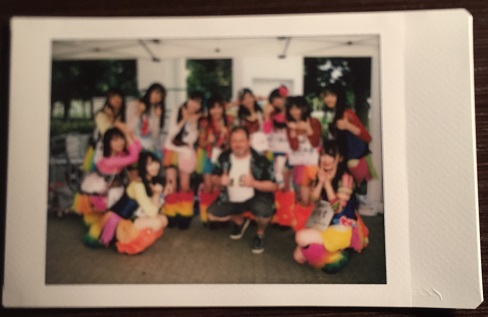 Afterwards I told the members that I had been to PARMS in the past, and was a fan of Oz and Pa-ken Girls, but stopped going when my favorite member graduated. Anna asked who my favorite member was, and when I said Himeri her jaw hit the floor, LOL. “Himeri? Honto???”   A short time later, in the middle of the cheki/handshake portion of the event, the Gundam Program started. All but two of the members ran over to watch the huge Gundam statue, with staff running behind them to try and maintain security. It was cute seeing a bunch of Kamen Joshi girls standing among the crowd, and nobody really bothered them. A few minutes later they returned to finish the handshake event.  I took a short break and grabbed something to drink, since the group I originally came to see would be taking the stage relatively soon… 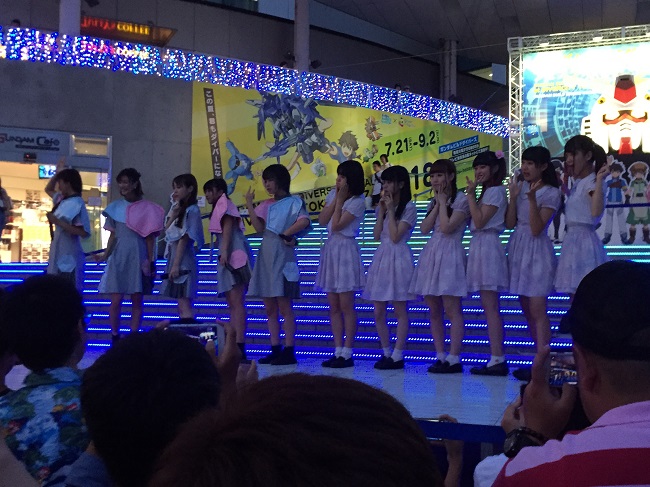 I actually had the opportunity to be right in front, but I didn’t want to stand there waiting for so long.  Plus it was on the far left, which is the opposite side from where Tanifuji Misaki usually stands on the stage.  I instead took a spot on the far right next to the camera bay.  The members came in from the parking lot and went into the tent.  Ahh, so in addition to KissBee, KissBee Youth, their kenkyuusei unit was also in attendance.  The members came out for a sound check, but there was a major issue with all of their microphones, so they went backstage.  In the meantime theKenkyuusei came out and performed one song.  There is really nobody in KissBee Youth that I know or even care about, so I was glad their set was short.  In the meantime the main unit returned, quickly checked their mics, and went directly into a song. 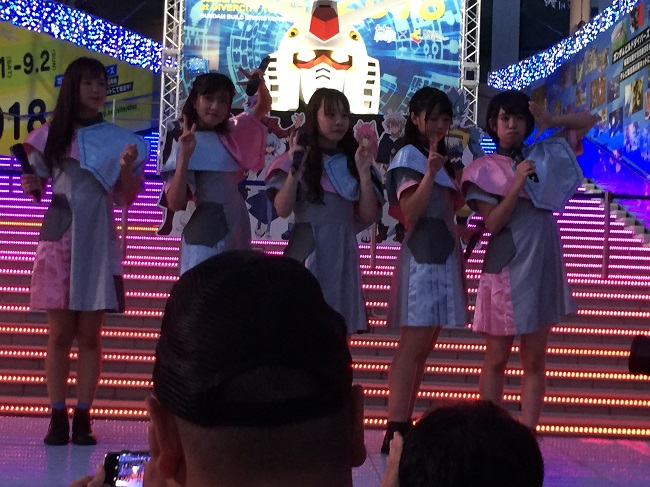 It took a while, but Misaki-chan did eventually notice me standing there and waved.  Technically, KissBee is a more mellow group, but their setlist consisted mainly of their lowest energy songs.  For a weekend festival crowd like this, I’m not sure I would’ve chosen those songs.  It had such a different vibe from Kamen Joshi, and also didn’t draw in nearly as many passers-by.  The final song they did was more medium-tempo, so I guess they raised their energy for that.  Ultimately they sang around four songs in total. 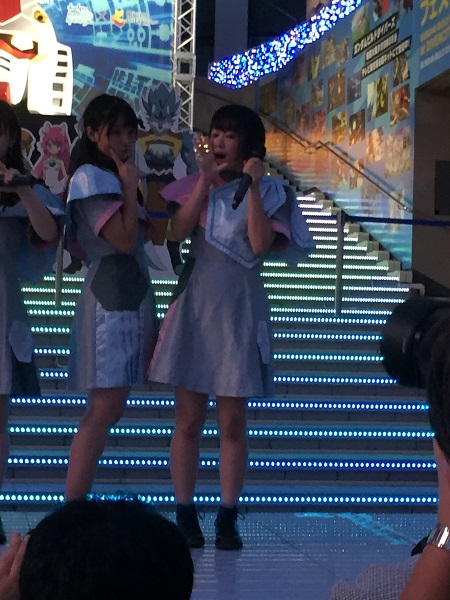 Misaki-chan with a new member I am not familiar with.

Like Kamen Joshi, KissBee also does a free “High Touch” after the show, and of course I got an excellent reaction from Misaki.  I had two tickets, and had decided instead of doing a cheki (2 tickets) I would instead do a shamekai and a handshake, which were one ticket each.  I lined up early for the photo, and was the third person to see Misaki-chan.  I got a big ‘hisashiburi‘ before apologizing, and admitting I am a “bad fan.”  She was like “No you’re not!  You were busy, ne?”  I told her I would explain more when I came back for my handshake. 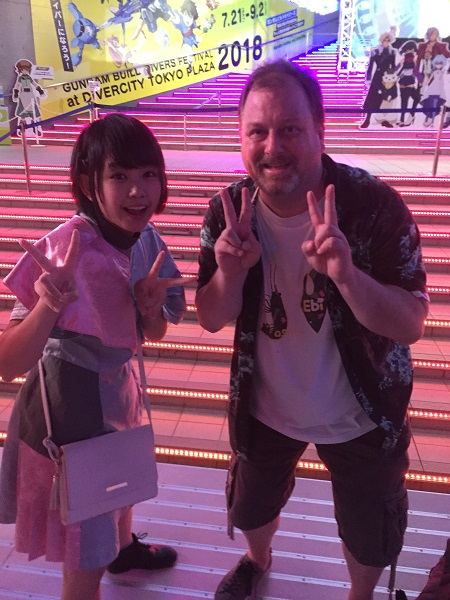 When I met with her for the handshake, I told her that I was really busy with school, and that Kanji class was very difficult last semester, so I wasn’t going to many idol events.  Technically, that is a half-truth.  I do go to idol events, but I cut down on the indie groups since they are generally more expensive to see, and frankly KissBee hadn’t been doing any in-store events that were convenient for me to attend.  In any case, I told her I was happy to see her, and thought the blue streaks in her hair were cool.  And with that I said goodbye. 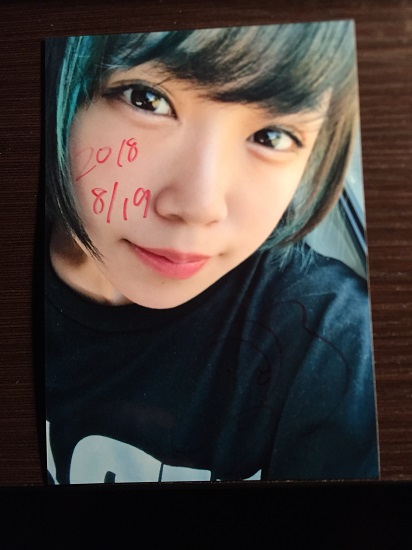 LOL, she forgot to sign the pic, she only dated it.

I went back into the mall to have dinner.  When I finished dinner and went back downstairs the event was just ending, so it went on for a while.  I headed for the station to go back home.  It had been a full 27 hours of idols for me, seeing HKT48, Minyo Girls, Kamen Joshi, KissBee, and I was not done yet.  I had won a ticket to see SKE48 in Nagoya Monday afternoon.  I had contemplated taking the overnight bus to Nagoya to save a bit of money, but at that point I was exhausted.  I just didn’t feel like going home, changing clothes, and turning right back around to catch a bus.  Not to mention all my electronics needed to be charged, including my portable charger.  Anyway, I would feel much fresher for Nagoya after a good night’s sleep!