I had cancel machi for last night’s Team K show, which happened to be Mutou Orin-chan’s birthday show. My cancel machi number was very high (#120) so I figured there was very little chance I would get in. However, I ultimately came very close (five people away) and won the drawing to go into the theater after the show and greet the members. Although I could feel that I was was coming down with something, (the flu?) I decided to stick it out. At the very least I could say hello to Ran-chan and congratulate Orin. If I remember correctly, this is the second time I have failed to get into a Team K show via cancel machi, but won the after-show drawing. Here are a few observations about the show, and the theater in general….

1) The theater staff has become a lot more lenient regarding tardiness: From a customer service standpoint, this is probably for the best, but it didn’t used to be this way at all. In the old days, if you had won the show but arrived after the cancel machi call had started, you had to wait and be part of the “Final Ten” group who goes into the theater last.  Now if people arrive late, even if they are in the middle of the cancel machi call, they let them in. This doesn’t happen all the time, but I have noticed it a couple of times recently. Last night there were at least 10-15 people who arrived during the cancel machi call who they let into the queue, which was probably the difference between me winning and not winning. Not only that…

A guy with his young daughter arrived 25 minutes late, and they let them in as well. Now on one hand, I would have a hard time turning away a young girl like that.  She had all her gear, and was ready for the show. However, at that point they were going to be stuck in the back, which would make watching the stage very hard for the daughter, unless dad put her on his shoulders. (Actually, that’s what he did!) Even more incredible, some guy arrived at the very end of the show and insisted they sell him a ticket and let him in, which they did! I am guessing he was part of Orin’s seitensei committee, since I can’t think of any other reason someone would want to enter the show that late.

2) The large screen to watch the show on is broken: I have no idea how long it has been broken, or how soon they plan on fixing it, but those who wished to watch the show had to do it on one of the small screens. However, the main audio still seemed to be coming from the large screen broadcast, and there seemed to be a slight discrepancy between the main screen audio and the small screen video. So while I was going to be critical of the member’s lip-syncing overall, it may not be a fair assessment in this situation.

3) I didn’t realize Team K has so many members who I like: Ran-chan is quickly becoming my favorite AKB48 member, but Team K also has Yasuda Kana, Komiharu, Team 8 Yokoyama, Orin-chan, not to mention a couple other members who are growing on me. And of course you also have Miichan.

4) Was Ran-chan the Center of Seifuku Resistance? I was so busy talking to friends via LINE that I was only half-paying attention to the stage. Technically it felt like all three members were sharing the center position equally, but I think Ran-chan was in Mako’s position. Moreover, she had at least a couple of solo lines in the group songs, and was sometimes singing and dancing in the front row. That’s awesome! Now she needs to work on her MC skills…

5) The cancel machi process, and the hashi drawing: So for those who haven’t read my reports in the past, this is the current process for cancel machi. 30 minutes before the show they figure out how many more people they can let in to reach 250, and begin calling cancel machi numbers to fill in the seats. When the show is “full” they do a secondary call of cancel machi numbers until they find ten more people. These ten get to see the show, but they are the last group to enter the theater. After that they line up everyone who had cancel machi but didn’t win, and we draw chopsticks to find 12 people who will get to enter the theater after the show to greet the members. Your chances to win depend on how many people are left. If there are 12 or less you will get in. Interestingly, last night there were thirteen of us, which mean one person was going to be out of luck. Luckily I wasn’t that one person. In fact, I lost the first two times I tried this, but I have won every time since.

6) My ‘High Wave’ Experience: On Thursday the show ended up going a bit late, since 1) they sang the Team K c/w track from Teacher Teacher, 2) the birthday festivities, and 3) The played the entire MV for Sentimental Train, except for the end credits. In fact, they let us into the theater in time to watch the video, although I could barely see. (I had already seen it on YouTube earlier in the day) After the people in the first row, they let the standing people go through the ‘high wave’ line, which meant I wasn’t in the theater very long. The girls lined up, and I was trying to get Ran-chan’s attention since she was right in my sight line, but the one who noticed me was Katsumata Saori, who started jumping up and down and waving to me. As I went through the line, I got great reactions from Oda Erena, who I am never met before. She is quite pretty, and enthusiastically waved to me and smiled. Nagatomo Ayami gave me a “Hey, I know you” reaction. I haven’t seen her in a while, but I guess she remembers me from all those ‘Let’s Go Kenkyuusei’ shows I went to earlier this year. Komiharu went full on English, and now I feel badly about oshi-mashi’ing all those handshake tickets I purchased for her recently. I tried to make a big connection with Yokoyama Yui, but wasn’t too successful, and Miichan seemed to be on auto-pilot. However, Ran-chan seemed to be surprised to see me. I guess she is used to me being in the first couple of rows. But I got a chance to chant her name as I passed. I also had the opportunity to wish Orin-chan a Happy Birthday, and she gave me an enthusiastic wave.

7) The Group Pic: I usually purchase the Team photo only when I win the show. I was tempted to purchase this one because in all the shots they took Tomu, who was positioned just above her sister, was either making a funny face, or doing some sort of weird pose. I’m not sure which photo they ultimately went with, but I saw Gunji-san snickering as he left the theater to develop the pic. I sometimes find the photo posted on twitter, but haven’t been able to find it so far.

8) Orin is getting cuter by the day: I used to think she was goofy looking, but now I think she is adorable. This was her seitensei, so she had a radiant aura about her. But it’s something I have noticed for a while now, and I believe Tomu even wrote something about it in her birthday letter that was read during the show. 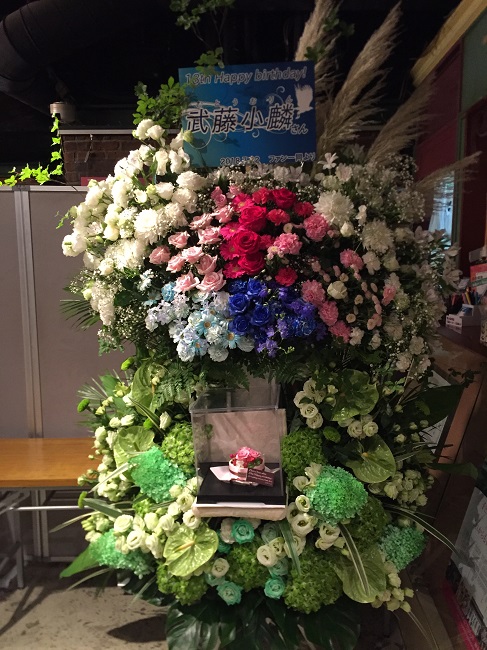 Anyway, that’s my report.  It was almost my 47th theater show, but I still had fun nonetheless.  And I am glad my body held out until I got home, as my temperature spiked around the time I went to bed, and knocked me out for about a day and a half.