It was nice that there was a six-week separation between SKE’s Tokyo handshake dates, as opposed to being back to back like last single. This was originally going to be the only event I would attend, since I wasn’t sure if I would be in town for the August event. I did ultimately end up getting a few August tickets for Tani, Kaotan, and Yuzuki. For this event I had tickets for a few more members, although I was kinda disappointed that I didn’t have any tickets for Sato Kaho, but that’s what happens when you have to apply so far in advance.

I arrived at Makuhari around noon, since I had strategically planned all my tickets from 12:15 to 4:45 pm. Since I had plenty of time I went to check out some of the special features of this event. The goods booth had a few new items for the 10th Anniversary. There was also a special area with drawings of ‘monster versions’ of the members, I think made by themselves. I’m not sure what that was about. They had the usual random member costumes on display, plus costumes girls could try on. Today the featured costumes were Koko de Ippatsu, which obviously made me happy. Finally, they had their badminton court set up, although I never saw it being used as long as I was there. Anyway, let’s get into the action… 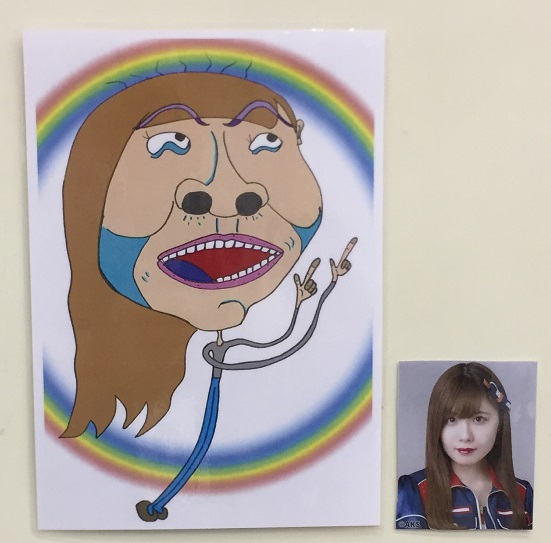 Tani Marika (Lane 16) This would be my first of two interactions with Tani, and I was looking forward to talking with her about all the excitement going on in her life right now. Her booth was a bit quiet. In fact, the crowd was kinda sparse throughout the venue. Anyway, I congratulated her, and she responded by thanking me and saying that she would do her best. I told her I had been slightly worried about her. She asked why, but I got pushed out before I could properly respond. 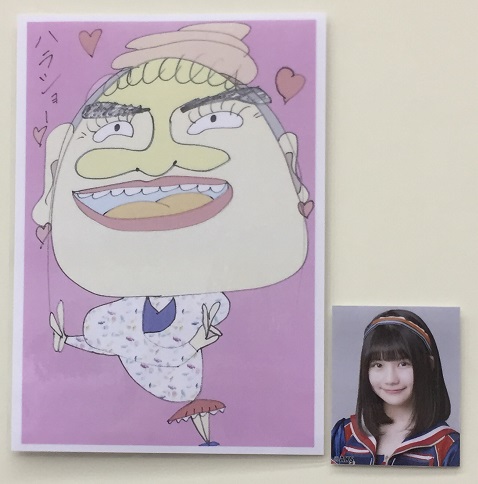 Obata Yuna (Lane 18) Obata is one of those girls who I really like, but don’t spend much time talking to. So I am always a bit nervous about what to say to her. I finally decided to tell her that when I saw Team KII in Nagoya that I loved the way she smiled on stage, and that she makes for a really good center. It was so cute, her smile got increasingly wider as I was making my little speech, and she thanked me at the end.

I took a break around this time and had lunch. Ya know, this “Jekyll and Hyde” weather can be annoying. It was quite warm today, and I was dressed as if it was not so warm. I wish I had worn shorts and a light T-shirt. When I returned I noticed a huge crowd on the left side of the venue. It turned out Suda Akari came out to promote her photobook, and was joking with the fans. It was odd though, they weren’t selling it at the venue. To me this was really a blown opportunity, especially if they wanted to boost the sales. However, I think she had to leave the venue early since she only had two slots originally scheduled (As did Jurina before she went on handshake hiatus) 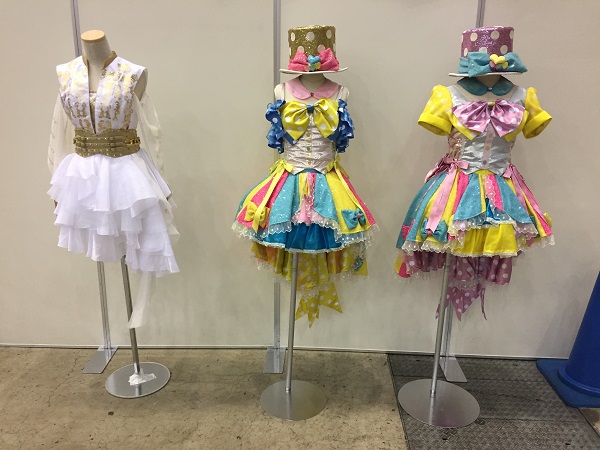 Matsumura Kaori (Lane 10) Since Kaotan will be graduating soon, I relish every opportunity to see her. I mentioned that I had seen the Koko de Ippatsu outfits, and admitted that my favorite outfit is Matsumurabu, which I had photographed when it was on display in Akihabara. She seemed surprised by this; “Really, you have a photograph of it?” Yes! My last ticket of the day would be for Kaotan, so I would see her in a little bit. 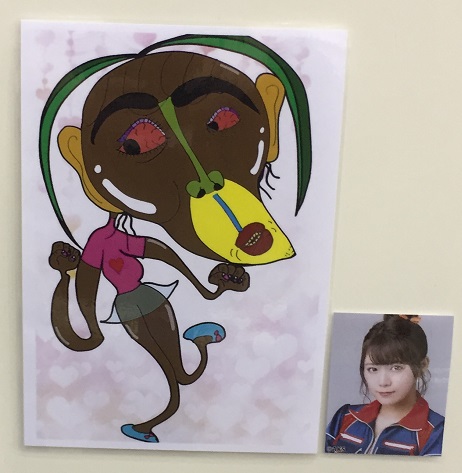 Yamauchi Suzuran (Lane 6) This would be my second meeting with Ranran since I saw her perform at Horipro Matsuri. She has long been known as a “fisher,” and I got my first up-close example of her tactics. The moment I walked into the booth she grabbed on to my Kaotan ticket holder. She seemed really happy that I was a Kaotan fan. (Ya know, I have some really cool favorite members, as I also get a similar reaction whenever a member finds out I am a Wasamin fan) Anyway, we mainly talked about the beret she was wearing. I have noticed a lot of idols (including Wasamin) have been wearing berets lately, so I told her it was really cute, and noted their popularity among idols. I cute thing was a) the way she pulled me close to her during her interaction, and b) the soft and demure way she was responding to me. I really got how fans would consider her a top member to visit at events.

I had been looking for @Tuhis all afternoon, and finally ran into him just before the next slots started. He and I have passed each other at events multiple times, but had never stopped and talked with one another ever before today. It was good to spend a few minutes talking about our event experiences, and of course our experiences in Japan. However, he had a lot of tickets since he was also doing make-ups for the cancelled event from last weekend, and I had a potentially long line to deal with, so we parted ways… 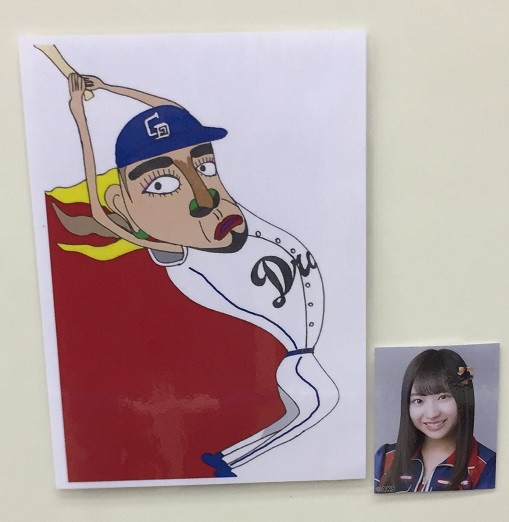 Hidaka Yuzuki (Lane 12) With Kaotan graduating, it is quite possible that I will upgrade the amount of tickets I get for Yuzuki going forward. But I screwed this visit up royally. Struggling with what to say, I decided to mention that her drawing was the easiest to spot, even from a distance since she used the Chunichi Dragons uniform. She was like “Yeah, I guess that would be easy.” Except at some point I must’ve called her “Mizuki” since she got this dissappointed look and her face and said “But I’m Yuzuki!” Oh shoot, I called her by the wrong name! I think I did that before at least once with another member, but she was the first one to ever call me out on it. Later on some friends tried to make me feel better by saying that they have called members by the wrong name in the past, and have been corrected. But I was bummed out that I had made a slightly bad impression. I need to make it up to her at some point. 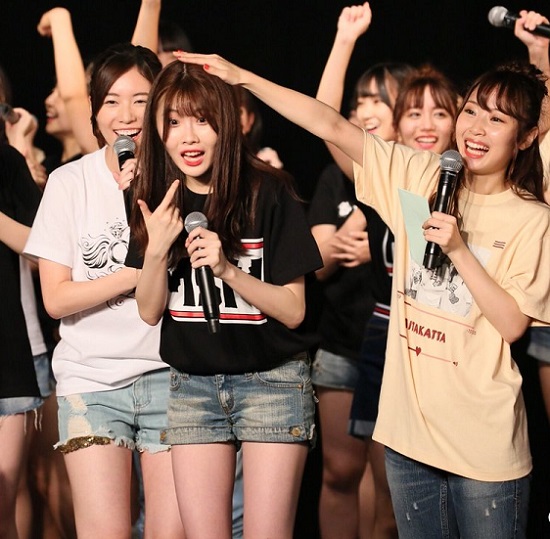 Tani Marika (Lane 16) My second visit with Tani, I told her that I was excited because I originally became her fan by watching her on television. Odekake, AKBingo, Ebishow, and a few others. She said she was going to do her best. I responded in English with “Never Give Up!” It’s a phrase I know she is familiar with, and she enthusiastically repeated it back to me.

Hirata Shiina (Lane 19) This is one of these tickets I sort of bought on a whim, and when the time came to use it I was like “Why the hell do I have this ticket?” I originally met Shiina at Yokohama Arena when she debuted at the Zenkoku event. She was my favorite of the SKE draftees. But that was around nine months ago. I hadn’t had any interaction with her since, and I have no idea what she has been up to. She had a relatively long line, as did a couple of the other draftees. So she must be doing something since she has cultivated a bit of a following. Anyway, when my turn came I reminded her that I met her at Yokohama Arena, and that I was impressed by her. I also told her I liked her drawing, but I got caught between saying cute (kawaii) and cool (kakkoi) so it came out all wrong. She kinda laughed, and said she hoped I come back to see her again, which was very nice. Maybe I will after all. 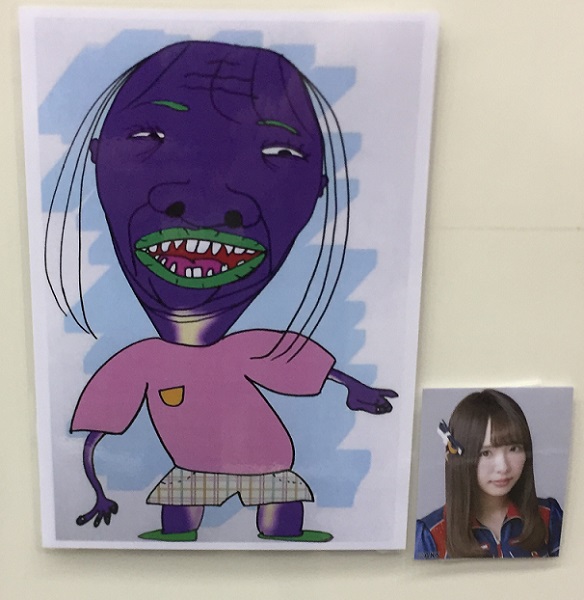 Matsumura Kaori (Lane 10) One last visit with Kaotan before I called it a day. I decided to tell her about my trip to Sadogashima last weekend, which was cut short due to the Typhoon. Ever the detective, Kaotan had a ton of questions about my trip. Why did I go? (to see Wasamin) Who did I go with? (members of the fan club) When I told her that Wasamin performed on the ferry boat, she seemed totally shocked. “She sang on the boat? Honto???” Yes, and it was a lot of fun. I told her I would see her soon, and hightailed it out of the venue and back to the train station.

I’m not sure how I am going to deal with SKE events going forward with Kaotan leaving. I mainly go to these events to see her and Tani. I mean there obviously are a few other SKE48 members I enjoy visiting, but losing Kaotan means losing my #1 motivation for the SKE exclusive events. When they post the schedule for the next single, I will decide what I want to do, but it will probably result in fewer tickets purchased, and I already purchase a small amount.