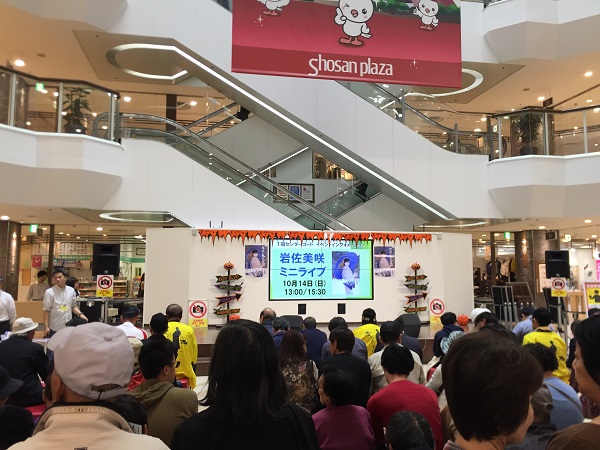 It had been two weeks since Wasamin’s eventful fan trip to Niigata and Sadogashima, which was the last time I had seen her perform. Last week she was in Kobe and Osaka. On Saturday she performed in Ibaraki, which I chose to skip because 1) It was one of those malls that is really difficult to get to without a car, and 2) I had other plans with a friend. However, Ageo isn’t far from where I live, and the mall is directly connected to the JR Station, so of I went.

I arrived around 40 minutes before the first performance, and noticed that most of the seats were already filled. That’s okay. I instead retreated into the nearby Choco-Cro for a cup of coffee and a danish, emerging shortly before the live. I picked up for copies of the CD (Types A, B, C and another C) and per usual, I chose all stickers instead of signboards since they are smaller, and easier to carry Standing in back, I changed into my Happi Coat, I was ready for the Wasa-show. The early setlist…

One of the events Wasamin is promoting is some sort of Karaoke Award show in Kawagoe next month, which features a few Nagara Pro artists. The details are a bit vague, so at this point I’m not sure whether or not I am going. There was a considerable older crowd in attendance. This isn’t the liveliest mall. In fact it seems the Supermarket downstairs is its biggest appeal. However, Wasamin seems to draw a decent crowd every time she appears here. Anyway, I decided to use two of my four tickets on a 2-shot… 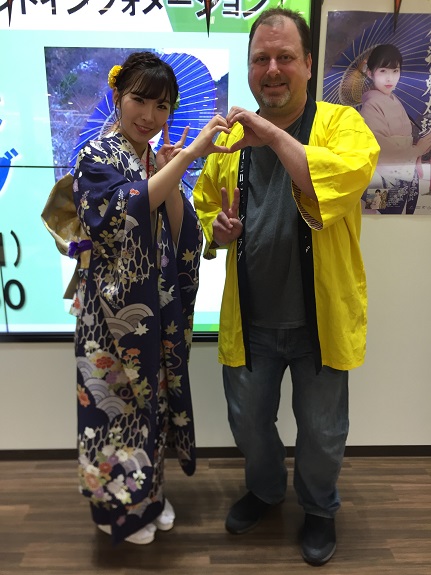 Since I didn’t get to talk with Wasamin after we got to Sado, I decided to tell her about some of the souvenirs I bought while I was there. Specifically, all of the crab-based food products. She asked if I ate them already, and I told her I wish I had purchased more of the Kani Miso paste. Wasamin also noticed my iPhone case is beginning to fall apart. Yeah, it’s time for me to find a new one. Perhaps she will have one as part of her 2019 concert goods. In any case, I bailed for lunch, and to do a little shopping. I was also battling a bit of a stomachache, which I hoped to take care of before the later show.

I was a little bit late getting back for the later show. Wasamin was taking the stage as I arrived, so technically I didn’t miss anything, but the back of the viewing area was pretty full, so I was almost back to the cosmetics department that faced the stage. No matter…

By the way, the had the stage set up with a Halloween motif. I’m not sure if that was Wasamin’s doing, the music shop, or the mall itself. In any case, they decided to move the decorations around to make put them closer to Wasamin while she performed. Originally I had planned to use my other two tickets for two individual handshake and talk sessions. But since they moved the props in such a way that they could be integrated into a 2-shot, I decided to do that instead. Monster pose… 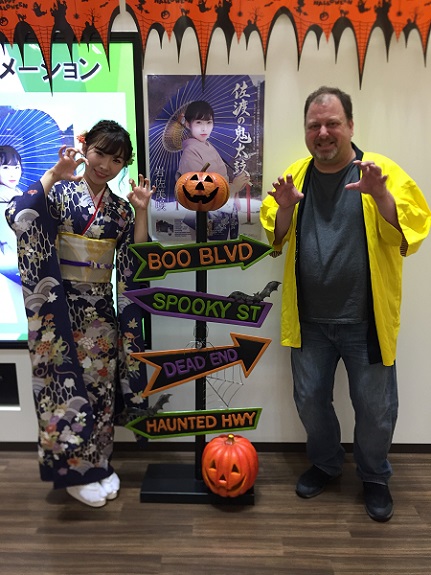 I guess the props reminded her, since she immediately asked me if I had applied for her Halloween party. I responded affirmatively, but then told her I had a little bit of trouble with the application process. She looked crestfallen for a moment, until I told her that everything was okay. Actually, Ichikawa-san (Wasa-manager) seemed to know about it, since she laughed and nodded affirmatively when I was trying to relate the story. (Technically, I overpaid for the event, which I also did last year for her Boat event.) I also told her I received my ticket for Yamano Music’s Enka Matsuri, which is in three weeks. So lots of Wasamin events coming up.

I decided not to stick around for the end, and head home since I had some work to do. However, the JR trains were stopped, so I ended up standing on the platform for almost 30 minutes waiting for the train to show up, Ugghh! Wasamin will be doing a lot of stuff outside of Tokyo over the next month appearing in Fukushima, Niigata, Kochi, and Ibaraki. After that there will be a bunch of Tokyo events to enjoy..