Tokyo CLEARS graduation is one week away, and although I really wanted to attend their final live, I didn’t pull the trigger and purchase a ticket when they first became available. Big mistake, as the Live FINAL sold out rather quickly. Actually, they are performing two lives next weekend, one each on Saturday and Sunday, and by yesterday Saturday still wasn’t sold out. However, I actually have a fairly busy weekend planned already for the 17th and 18th. So even if I did choose to go, it would be at the expense of either Wasamin’s cheki event, or HKT48’s National event.

All that said, I really wanted to see the group perform at least one more time before they graduated. I had two choices; Wednesday night, which conflicted with Wasamin’s Ginza Enka Matsuri performance, and Sunday in Akiba. I had no other Sunday plans, so the choice was made.

This event featured a bunch of small idol groups, most of which I had never heard of. The show started at 3:45, but CLEARS wasn’t performing until 6:55, so I didn’t even get to Akihabara until 6:30. Akihabara Zest is a couple doors down from Twin Box Garage, which was also holding a big Idol live, so there were tons of Wota all over the street. When I arrived, the venue wasn’t too packed, so I had my prerequisite drink and headed toward the stage. After sitting through three groups, the room suddenly became packed with CLEARS fans. We all eventually moved up and took over the spot in front of the stage.

They weren’t on stage for more than a few moments before I was reminded how much I like this group. CLEARS often wear such adorable costumes, and these were no exception. Red/White striped skirts and suspenders, over tight white shirts, showing off their busts. (Most of Tokyo CLEARS are kinda busty, at least compared to other Japanese idols) Not surprisingly, Sayuri was the first one to notice me in the audience, and gave me a couple of waves, followed by Sheena and Ruka. I’m sure Rion must have noticed me, but she wasn’t really reacting to me at all. Hmmm, perhaps she has had enough of my long absences. (I hadn’t seen them in six months) Eventually she pointed to me and winked. 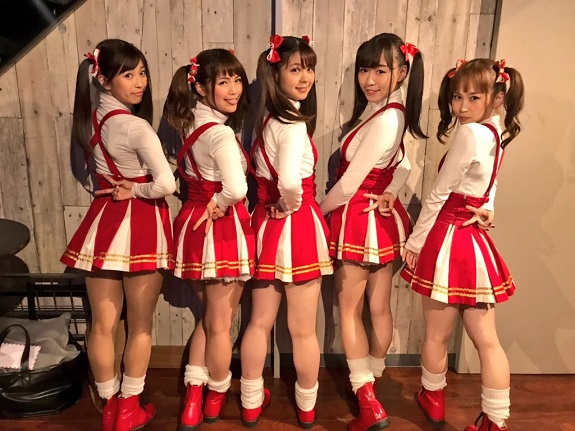 They performed a five-song setlist, including Kansha Fanfare, which is one of my favorite CLEARS songs. In between songs they reminisced about Akihabara Zest, where they have been making regular performances over the last year. They were also promoting their graduation live next week. Eventually their set ended, and there was a logjam in the doorway leading to the bar as the CLEARS fans all filed out while the next group’s fans were trying to file in. The CLEARS fans overwhelmed the tiny benefits area, much to the chagrin of the other three groups that were doing chekis and handshakes with their fans. Since it was such a huge crowd, I decided to just stick with purchasing a signed cheki with Rion. Luckily, I had just finished my purchase and was walking toward the queue when the girls came out and walked right by me, so I got to greet all five of them as they walked by. Rion gave me a big “Hisashiburi!”

As long as the queue was, it moved rather quickly since they were able to handle four customers at a time. So although the queue extended up the stairs and outside into the street, it only took slightly more than five minutes to get to the front. Rion was super genki as she greeted me for the cheki… 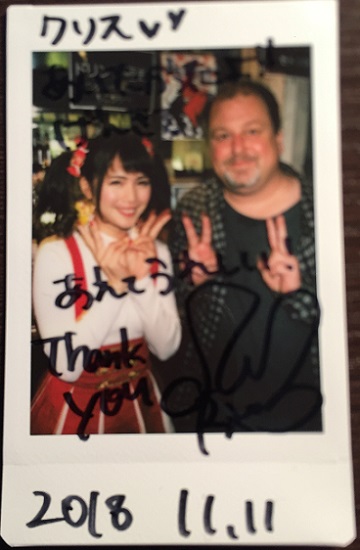 She looked so adorable with those twin-tails, you almost forget that she is going to turn 28 soon. That is until you talk with her. That’s another thing I love about Rion, she is very ‘adult-like’. That is to say she doesn’t really try to act like a ‘cutesy’ idol at all. Anyway, I asked her about next week’s shows, confirming that Sunday’s show was sold out. She told me to ask her manager, and that I might be able to come. I also mentioned the job interview I have this week. She wished me luck, and asked me to please continue to communicate with her on Twitter.

I debated buying more tickets, but ultimately left to get dinner at Gyukatsu Ichi-Ni-San, which is really good if you ever find yourself in Akihabara. We’ll see about next weekend, although I have a feeling that last night was my final CLEARS show. I feel a bit sad about that. They were a great idol group. Fun songs, and Rion is an absolute goddess. I hope that isn’t the last time I see her. Considering all the idols who I have subsequently seen after their graduations, never say never!