Skip to content
Since this event may be the last opportunity I have to hang out with Wasamin until Christmas Eve, I wanted to be sure and make an appearance. For the next month she will have a weekend off from fan events, and then do a series of appearances in Western Japan, and despite the fact that I will have the time off, I’m not sure I want to make the trip. Maybe I will change my mind. Anyway…

Last weekend Wasamin sandwiched her ‘Love Live’ concert with two festival appearances. Friday she performed at the Wongoo Fest in Ibaraki Prefecture, an event I was unable to attend since I had AKB48 handshake tickets. However, I had nothing conflicting with her Sunday performance in Kameido, which was a lot closer to where I live anyway. I did have a couple errands I really needed to run, but I would make it all work one way or another.

I arrived in Kameido around an hour before her appearance at Oedo Aki Matsuri, which was a tiny little festival in a small park down the street from the station. Kameido Ume Yashiki is a little park in front of a small market. However, the small square is Edo-themed, with a bunch of Edo-style art, not to mention the structure the market is housed in is also constructed Edo-style. There weren’t really any food or omiyage booths, it was simply a stage with a bunch of various artists performing. After grabbing a quick sushi lunch down the street, I headed into the stage area and watched some of the earlier performers. Billyken, another NagaraPro associated group, was just finishing up their set. After that, an idol group called Banzai Japan took the stage, and then a martial arts performance group called “Shadow.” 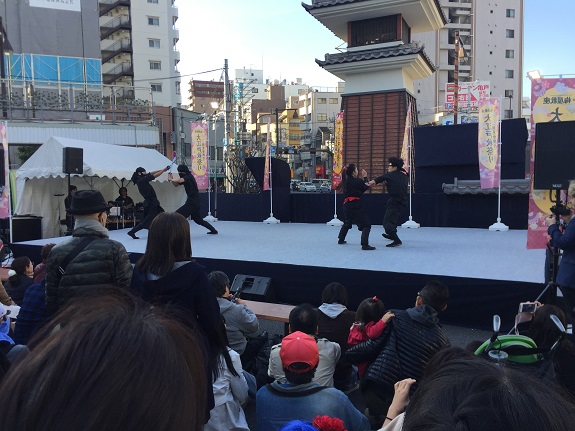 It was all interesting. I was trying to get some good action shots of the martial arts team, but I was really just passing the time, waiting for them to finish so I could see Wasamin. If you watch the short video I took, they were okay. Anyway, Wasamin took the stage almost immediately after the “Shadow” finished up. Here’s the setlist… 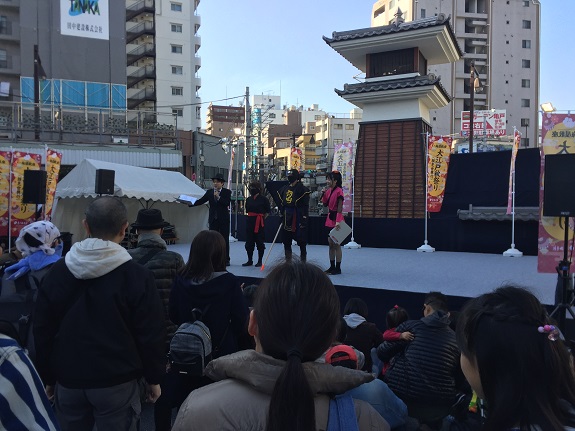 The MCs with “Shadow”

BTW, when the MCs introduced her, they called her single “Sado no Onitaiko,” a common mistake. Most of the Wasafans had scouted a spot near the front side of the stage on the left. I was on the opposite side, a bit further back. But all the Wasafans were fairly rambunctious throughout her performance, prompting Wasamin to comment that we may be annoying the people living in the surrounding apartments, LOL.

Also, the same TBS crew that was filming her show on Saturday were also filming this event. I wasn’t clear what show they were recording for, but from what I gather it was something that was shown this past weekend, so I didn’t get to see it.

The show ended, and we knew there was supposed to be CD sales and benefits, but none of us could figure out where we were supposed to go. Finally Ichikawa-san came out and directed us to the backstage area where they had a sales booth set up. We all thought that might be where it was, but it seemed like it was off-limits. Anyway, since nobody had any handshake tickets yet, we were literally buying our CDs, getting our tickets, and then immediately stepping right to meet with Wasamin and take our pictures. It didn’t help that the owners of the local Enka shop are a little old couple, and not exactly the quickest at performing transactions. It also turned out Wasamin had a surprise appearance scheduled for a live show that evening, so they were trying to process everyone as quickly as possible too. I purchased two CDs, and immediately came over for my two shot, holding my prized good from the Saturday night show… 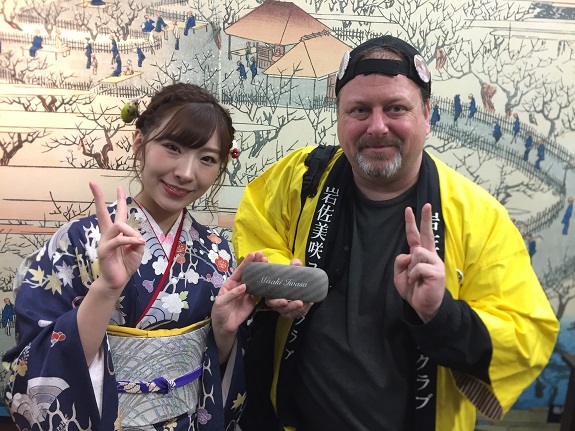 I told Wasamin my plan to get new glasses to put in my special Wasa-case. She asked if I found my old ones, which I didn’t. But I told her that I thought my eyesight may have changed, and I probably needed a new pair anyway. (This turned out not to be true, my prescription was pretty much the same) I mentioned that today was a lot of fun, and I would see her again soon. And with that I was off…

It turned out there was an Atre (shopping center connected to many JR stations) at Kameido Station, so I decided to do a little exploring. Not only did I find a QB House with a relatively short wait, but they also had a Zoffs, which is a discount glasses shop not dissimilar to Jins (the most well-known discount glasses shop in Tokyo) So I got my eyes checked, a new pair of glasses, and a haircut before getting back on the train and heading home. This was perfect, since I originally figured I would have to go somewhere else to get my glasses, and I wasn’t sure if I would have time for a haircut.

As for Wasamin’s December schedule, she has a special Mobame member exclusive event next weekend, which I will not be attending. The following weekend (my birthday weekend!) she will be in Osaka and Hyogo, the weekend after that? Fukuoka and Okayama, before returning to Kanto for a Christmas Eve day mini-live in Saitama. Unless I go to Osaka, the Christmas event will likely be the next Wasamin event I attend, although we can probably look forward to some Christmas cosplay for that event!