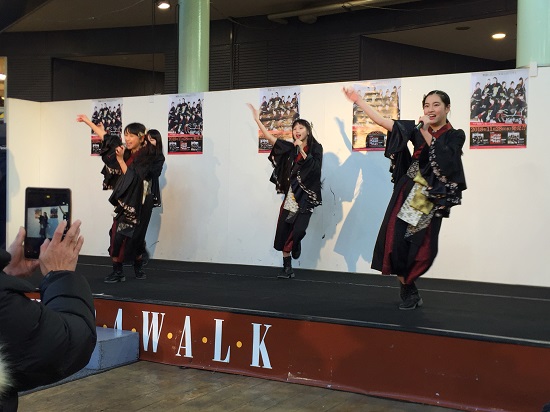 I’ve had a quiet week. I mainly spent it cleaning the house, catching up on rest, and studying for my last finals which are coming up next week. Checking the schedules of my favorite idols, I noticed Mingaru were performing in Saitama this weekend. I like going to events in Saitama as they are relatively easy for me to get to. I also noticed that both Yuua and Miyabi were slated to perform. I hadn’t seen them since their 1-man live in Hamamatsucho, so I was motivated to see the performance. It was free after all. With that in mind, I headed out Saturday morning for my little adventure…

To get to Wakaba, where they were appearing, you have to take the Tobu-Tojo Line. Normally for me that means I have to head down to Ikebukuro to catch that train, and then head back up. However, I realized that the Tobu-Tojo Line goes somewhat close to where I live. So why I am I going all the way down to Central Tokyo? I had a choice; I could walk 6 minutes to the bus that takes me to Tokiwadai to catch the train, or I could just walk for 20-25 minutes. It was early, so I decided the exercise would be good. I’m glad I did it too, since I discovered a really nice Supermarket about 10-12 minutes from my house that I didn’t know existed. It is one of the many things my local neighborhood lacks, so I’m glad I found it. Anyway, I made it to the train and was on my way…

I had been to Wakaba Walk once before for a Wasamin mini-live. It’s a cute little outdoor mall directly connected to the station. The stage is in the center square, just below the food court and next to the Supermarket. Since I got there somewhat early I decided to have lunch (Indian Curry) before the show. After that I headed down and purchased a ticket for Minyo Girls’ Christmas 1-man live, which afforded me a ticket for a signed cheki. The five members who were present (Miyabi, Yuua, Rina, Izumi, Ryo) were roaming the mall and handing out flyers for their performance. I positioned myself in the standing area not far from where the girls were, but this time none of them came up to me. As it got close to 1pm, the girls went backstage before returning to for a warmup song. There was an issue with some of the mics which they never seemed to iron out Some of the girls’ mics were too hot while others were too low. I also noticed Yuua’s mic was cracking throughout the performance. I have seen this issue happen a lot at these mini-lives. I’m not sure if it is a problem with the venues, or with NagaraPro (Wasamin sometimes has speaker issues) but they need to iron it out since I think it is detrimental to the impression they make on people seeing them for the first time. 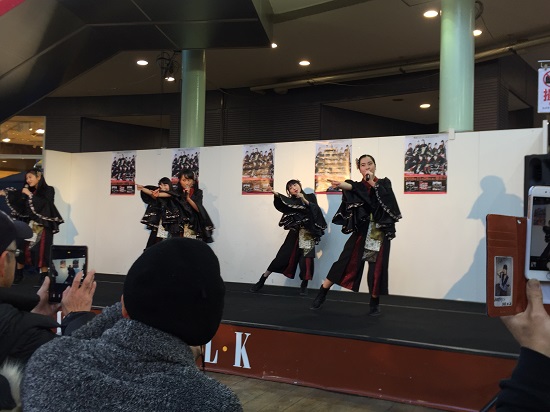 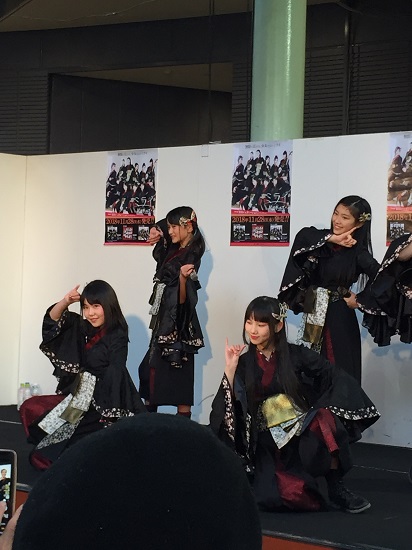 There were two performances, at 1pm and 3pm. For both setlists they did six songs, mainly selections from their new single, as well as songs from their first single. They had a cute MC is the first set where they said what they wanted Santa-san to bring them for Christmas. I didn’t catch all of what they said, but I did get that Miyabi wants a guitar since she is learning to play, and Rinacchi mentioned wanting Nike athletic equipment. In the second show I think they were talking about their favorite anime. I know both Miyabi and Ryo mentioned Doraemon. The musical highlights for me were Kokiriku Bushi, which they performed in the first set, the in the second set Akita Ondo. Oh, and I am beginning to love Secret Game, which is another one of the c/w tracks to the new single. Both sets went on for over 30 minutes, which was quite nice for a mini-live. On the other hand, the weather is just starting to turn very cold. In fact, Miyabi’s mom, who was standing next to me during the first set, kept complaining about how cold it was. Frankly, I agreed with her, and by the second set I was really looking forward to getting inside somewhere where it was warmer. 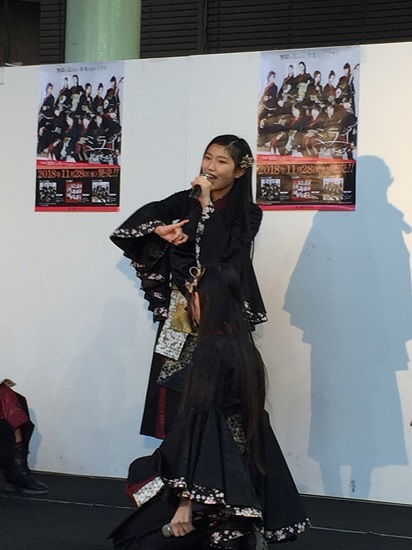 As for benefits, like I said the concert ticket I purchased afforded me the signed cheki, which I used on Miyabi. However, I also wanted to take a cheki with Yuua. So I would need to make another purchase. But first, Miyabi… 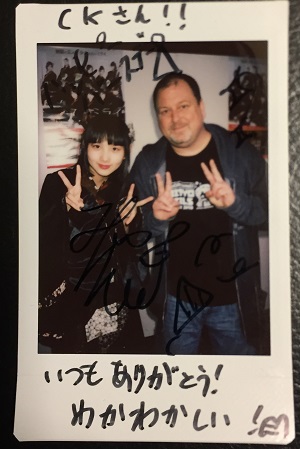 Ryo was running the line, and asked who I wanted to see. She also offered to stamp my card, but I already had that done. Her manager took the cheki, but I neglected to give her the second ticket for the signing since I thought they did that separately at the end. So when Miyabi handed me the photo I told her I wanted to have it signed, so she called her manager back over so I could “pay” for that. So Miyabi began signing my photo, and I mentioned to her that my birthday is coming up. I asked her how old she thought I was, and bless her heart, she answered “20 or 21.” It was about this time that she noticed that the photo didn’t develop, so she called the manager back over once again so she could re-take the photo. Miyabi mentioned she hadn’t seen me in a while (It had been two weeks actually) so I mentioned that I went to the Ikebukuro mini-live that she didn’t perform at. She then confirmed that I had tickets to their upcoming 1-man live events, I told her I had tickets for December and January, and would purchase one for February later this month. In any case, it was an extra-long photo session with Miyabi. I’m glad she was talkative. At the end she asked if I was staying for the second show, which I was. 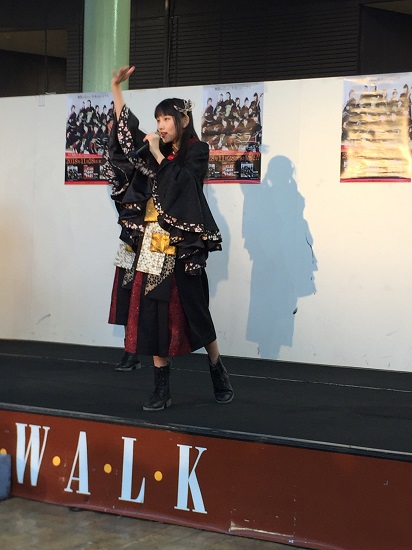 In the meantime I decided to just get all my cheki’s out of the way in the first session while it was lighter out. (I seem to get a lot of “dark” chekis from the Mingaru) So I went to the table and grabbed one of their new CDs, which afforded me a non-signed cheki. I immediately went to Yuua, who I had promised I would come to visit a few minutes earlier. 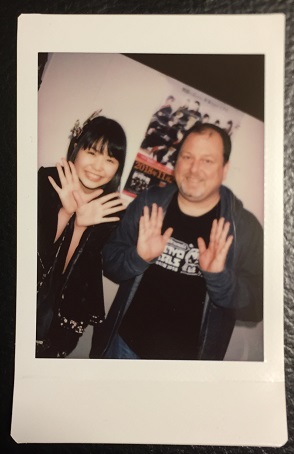 Normally when it isn’t a signed cheki the session is a bit shorter, but Yuua was also in a talkative mood. Also, Miyabi actually snapped the pic, and the three of us were talking for a few seconds. I was telling her I like coming to Saitama (her home prefecture) since I live nearby and it is easy to get to. She also asked if I planned on coming to the 1-man live. I mentioned that I thought I was going to America, but it looks like I am probably sticking around, so I would be there. 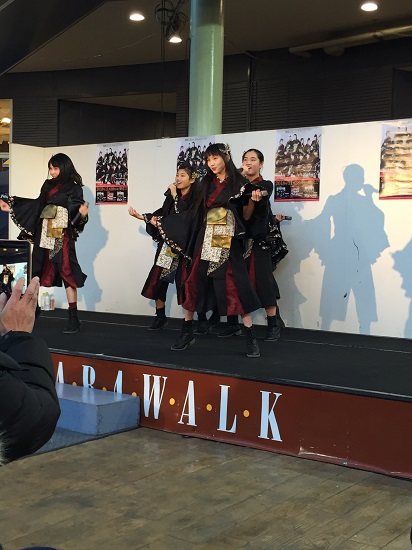 I took both chekis between the first and second set. When the second set ended, I bid farewell to Miyabi’s parents and quickly took off for the train station. As I mentioned, I don’t have too much planned this month idol-wise, although I now have that Minyo Girls ticket for the 23rd. Also, Wasamin has a mini-live in Saitama on Christmas Eve day, so that should be fun. We’ll see what else I can shake out during my six weeks off.