It’s hard to believe this would end up being the only day in December I would get to spend with Wasamin. Most of her appearances this month have been in either Kansai or Kyushu, so this is an event I surely didn’t want to miss. Not to mention that she usually does some kind of cosplay for Christmas. I was going to miss the AKB Zenkoku event at Makuhari, but no matter. I can’t think of anyone I’d rather spend Christmas with than Misaki-chan. 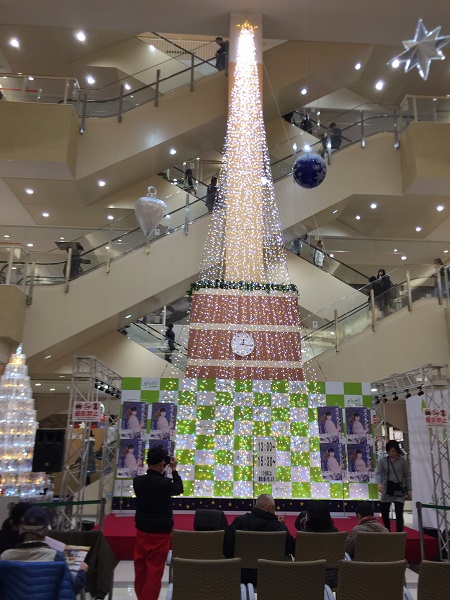 I have been to this mall a couple of times before. Konosu is a 35-minute train ride north from Akabane. The JR station directly connects to the mall, which makes it super-convenient. Since this was Christmas eve, the mall was in full-decor, and bustling with last-minute Christmas shoppers. Not to mention the mall’s resident Cozy Corner and KFC had long queues of people picking up their traditional Christmas Cakes and buckets of Chicken. I was always under the impression you had to pre-order the KFC Chicken months in advance. However, this particular branch was selling them “on the day,” so if I wanted to I could’ve picked some up. However, I had a busy day and evening planned, and I had other “pre-ordering” to do…

As expected, the local silverback community had camped out pretty much all the seats early, so most of the Wasafans organized themselves in the back standing area. The CD pre-order queue was quite long, but I was there 45 minutes early, so no biggie. I ordered four copies, which would afford me two 2-shots with Wasamin. I was especially interested in taking a photo with her during the later set, where she promised to wear a Christmas outfit. Her “snowgirl” cosplay she wore in Hiroshima on Sunday was adorable. But Wasamin can make just about any outfit look cute. There was a packed crowd for the early show. Here are the day’s setlists…

I was hoping she would sing something “Christmas-y,” but she really doesn’t have anything like that in her repertoire. (The only time I recall her singing a Christmas song was at her Christmas Fan Club Live a couple years ago) This is also one of those malls that restricts the volume of the performance because they don’t want it to disturb the shops, so I guess it was fitting that she chose some slower songs for the performance. Once the first set ended the queue immediately formed, and encircled the entire seating area. It would be a long wait, so I queued up as quickly as I could. Finally my turn came. It was my chance to present Wasamin with her Christmas gift, which I picked up the day before in Shinjuku. I also wrote her a Christmas fan letter.

Wasamin changed the pose at the last second. Originally she did a pose pretending she was sleeping, as she did with most everyone who brought her a gift. But I noticed her shift right before the photo snapped. It’s still a nice pic though. I decided to talk to Wasamin about the TBS show she was on last week. I told her that I enjoyed the part where they did the “magic” clothes change, and that her outfit was extremely cute. (If you watched the show, the MC exclaimed “Mecha Kawaii!!!”) I have seen her wearing that outfit in Twitter photos before, and I have always liked that look on her. At first she seemed confused about my comment, although Ichikawa-san (Wasa-manager) knew what I was talking about the entire time. “Kimono kara, kawaii fuku made!” Ahhh, now she got it, LOL. She thanked me for the gift, and afterwards I decided to grab some lunch. When I returned the handshake line was still going, so it was definitely a successful day for her. I camped out in the local Choco-cro to await the later show… 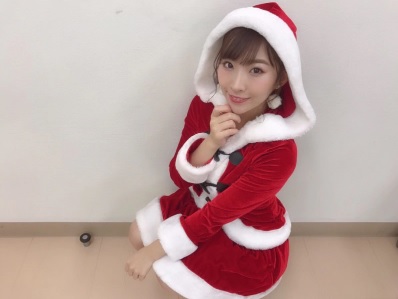 So Wasamin came out in her “Wasanta” outfit, which showed of her cute legs quite nicely. Interestingly, the mall PA system kept going off during the set, and at one point she began responding to all the announcements. They were calling out names, and she would respond to the PA “Yuko? Is Yuko here?” “Yuko-san, if you are here please pick up your Ice Cream cake” while pointing to the Baskin Robbins, LOL. It happened again in the next MC, and she started laughing. BTW, there was a little old couple standing in front of me, and while Wasamin was singing the chorus of Sado no Ondeko, they both turned to each other and started nodding like “Wow, she’s really good” They did it again on the second chorus too. It’s great to see her winning people over this way. 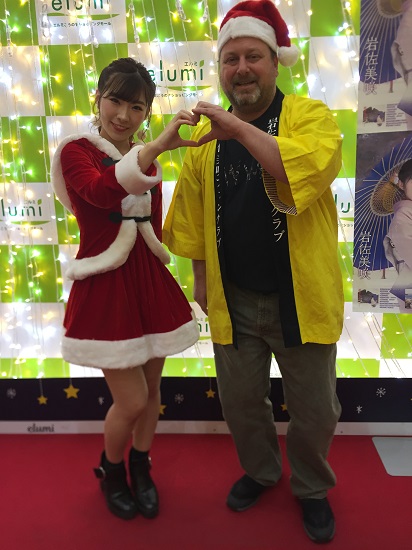 This time I tried to get closer to the front of the queue since I needed to be in Shibuya by 5:45pm. I chose the heart pose because I

her outfit. Afterwards Wasamin admitted that she already opened my gift. “Yeah?” “An assortment of bath salts? And Tea-oil soap?” as she listed off the contents. She looked me in the eyes and thanked me. It was quite cute. I told her the items are made in California. (The shop I got them from is called Soaptopia, which I have considered getting her a gift from before) I then asked her if she read the short letter I wrote her, which she said she did. In the letter I happened to mention some personal news that I am excited about, and she turned to Ichikawa-san to relate the story. She told me that she was really happy for me, and wished me luck next year.

And with that I wished her a Merry Christmas and was out the door. I made the 4:25 train back to Tokyo, which put me in Shibuya at 5:25, plenty of time for my next engagement. BTW, Wasamin has slew of events scheduled for early next month. The scuttlebutt is that the schedule looks so much like one she would do during a single release week that perhaps the 8th single was supposed to come out earlier, and got pushed back for some reason or another But that’s all speculation. As it stands now, in early-January she will be performing at…

For me the two Chiba events are pretty far away, so I will probably miss them. The Akishima event conflicts with the SKE handshake event, but I should be good to go for Ikebukuro and Odawara. And this will lead up to her big concert later in the month. Oh, and one other funny story…

So my plan for the evening was to go to an idol show in Shibuya. My friend Derek has been asking me to go see Necronomidol for quite a while, and since I am technically on holiday I had plenty of time. I got there as doors opened, but decided to hang back and wait for the queue to die down. In the meantime, there was a random idol group promoting themselves in front of the club. This happens quite often at idol shows, and often the girls will timidly avoid me since I am not Japanese. However, one of the members decided to take a chance, and we ended up talking for over five minutes. That’s not all; according to her, she is friends with Wasamin! I usually take that with a grain of salt since I have had idols say that to me before, and when I ask Wasamin she is like . “Uhhh, I met her….I think,” or something along those lines. But it was cute how excited she got when I mentioned Wasamin. Oh, the group is called Hissatsu Emomomomo!! and the member’s name is Minase. In any case, I followed her on Twitter as she requested, so maybe I will go see her perform one of these days She was quite nice.