In my many years being alive on this planet, I have enjoyed a few ‘interesting’ Christmas Eves.  Eating tacos and sipping margaritas in 96 degree (Fahrenheit) weather on a beach in Mexico comes to mind.  But spending it in Shibuya watching a bunch of hard-rock themed idols was a first for me.  This is definitely not the type of idol show I usually go for, so allow me begin with a little bit of background…

My friend Derek and I have known each other for a few years now.  He used to make frequent comments on this blog.  We became friends when he moved to Los Angeles, which was my hometown before I moved to San Francisco.  Now we both live in Japan, and have the opportunity to hang out more often.  I am very proud that he has found a way into working with idol groups, which I know from talking to him over the years has been a dream of his.  He has been taking a crash course, and learning some hard lessons about what it takes to work in the Japanese idol business.

Derek is not the first person in my life who has repeatedly invited me to come see a specific idol act.  My friend DLJ used to always want to take me to see Kamen Joshi back in the day.  He also did the same thing with FES☆TIVE.  To be honest, I am usually resistant to these kinds of invitations for a number of reasons, although in all fairness I did end up liking both of those groups, and ended up being a fan of certain members as a result (Hinari in FES☆TIVE, Himeri in Alice Project)  You could also say that my introduction to Kamen Joshi indirectly caused me to become a fan of Tokyo CLEARS and Sawabe Rion, since I first saw them at PARMS. (Kamen Joshi’s theater in Akihabara)  That said, for me to become attracted to a specific idol group, it usually has to be a completely ‘organic’ process, and when someone is trying ‘get me’ to like a group, it takes away some of that spontaneity.  I want to “discover” the group on my own terms.  Not to mention, I have grown weary of throwing down 3500 yen for idol shows unless there are groups there I really want to see.

On the other hand, I do want to see the work that Derek is doing.  Also, both DLJ and Derek have been happy to accompany me to see Wasamin on multiple occasions.  That made we want to return the favor, so to speak.  So I told Derek that I would be willing to attend a Necronomidol show when I had the time.  Moreover, I told him that this holiday season would be a perfect time, as I would be in Tokyo and be free most evenings.  I was originally supposed to see them a couple weeks ago in Meguro, but I didn’t hear from Derek until it was far too late for me to make it in time.  So we decided on this Christmas Eve show.  After all, his group were the headliners. 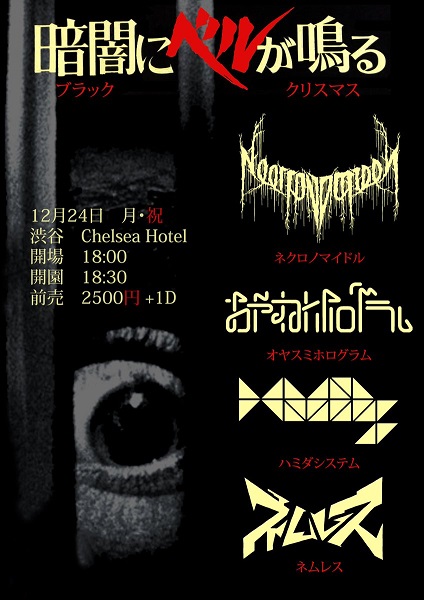 I spent the day in Saitama at Wasamin’s Christmas live, which I already posted about here.  That ended around 4:15, which gave me plenty of time to catch a train back to Central Tokyo for this show.  In fact, I was a bit early, so I camped out in The Hub down the street and used my coupon for a free Christmas beer.  Shortly before showtime I walked back over to the venue.  However, I didn’t go in immediately, instead waiting for the entry queue to die down.  The building that houses this venue is also the location of a couple other live houses, including Shibuya Milky Way.  One of the groups playing upstairs was outside passing out flyers to promote their appearance, and one of the members approached me.  We ended up having a nice conversation, which I also talked about in the above Wasamin post, and I will expand on in my next post.  But it was getting close to showtime, so I excused myself to go watch the show.

I had been to Chelsea Hotel once before, to see Chaki perform a solo live back in 2016.  It’s your usual dingy little basement live house, but it has a nice stage, and a great sound system.  As I paid to get in the first act was just getting started.  I wasn’t in the club for 10 seconds before I spotted Derek standing by the coin lockers.  I knew he would be super-busy for the entire night, and we wouldn’t have much time to chat, so after a quick greeting I hung back by the bar.  Since I had never seen any of these groups before, I wanted to survey the scene before I dove too deep into the atmosphere.  Here are my thoughts on the four groups who performed… 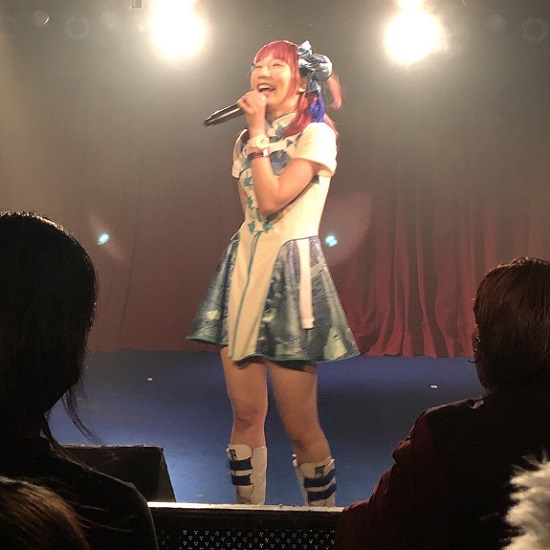 It is either Nem-ress, or Nameless (as the katakana styling would indicate), I’m not sure.  She is a soloist who performs extremely high-energy EDM-styled music.  The best way I can describe her is like Kyary Pamyu Pamyu on steroids, or maybe a human Hatsune Miku?  Every song was fast-paced, with a pounding beat, and she jumped all over the stage.  This is definitely not the type of idol music I could ever see myself getting into.  Not to mention the endless frenetic pace of her show was a bit too much for me.  That said, she is very good at what she does, and does a great job of interacting with her fans in the audience.  There are various examples of her live performances on YouTube…

By the way, since I was hanging out by the bar I saw a lot of the fans coming and going and was surprised to see a considerable number of foreigners in the audience. 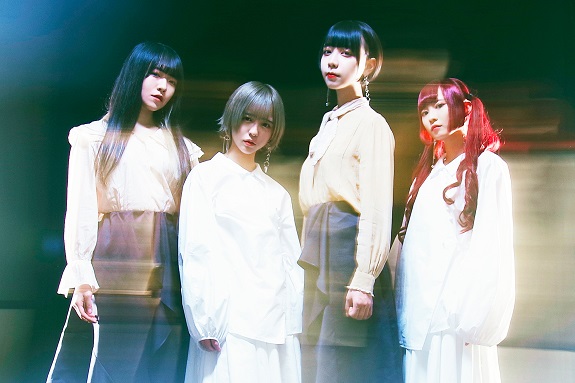 This group is like the Radiohead of idols.  Their sound was a lot like experimental rock.  The members all wore black, giving them a sort of Gothic look.  Of the four members, I felt the two taller girls, Hasegawa Beet and Mitsui Ameba were the most talented, singing-wise.  It seemed like their 45-minute set was one long song.  Ultimately I think the girls are individually talented, but I couldn’t find anything to latch onto in their performance that would make me want to see them again.  Here is a recent live video from their official site.  I actually like this song… 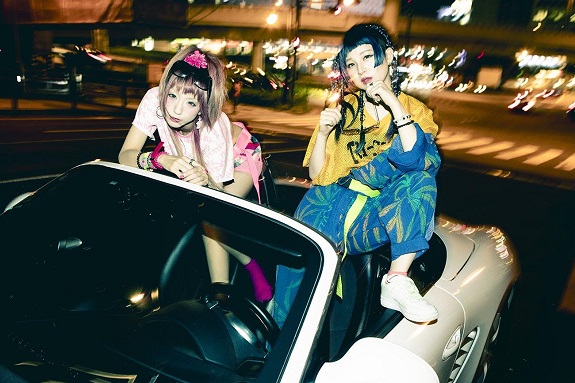 Okay, this group I have heard Derek speak about on multiple occasions, as they were part of the overseas tour he organized earlier this year.  I was surprised to learn that they were only a duo (for some reason I thought there were more members)  Of the three groups I had seen so far, this one was more my style.  They did have a bit of an edge to them, but their songs sounded more like traditional J-pop, and they interacted very well with the audience, at one point one of the members, Mochizuki Kanami, jumped into the crowd, riding on someone’s shoulders.  By the way, of the two members she was the one I liked the most.  Here is a recent PV of their song Ghost Rider, which they performed at the show.

At the end of Oyasumi Hologram’s set, I took a break outside.  Each group had a 45-minute set, so I had been standing by the bar for two hours already.  In the meantime I briefly talked to a couple of fans, one Japanese and another from the U.K.  But I wanted to get back in before the headliners hit the stage, since they were the reason I came.  When I came back inside, the area I had camped out for the entire evening had been overrun with people, so I lost my spot.  I instead decided to go closer to the stage for a better look at the group. 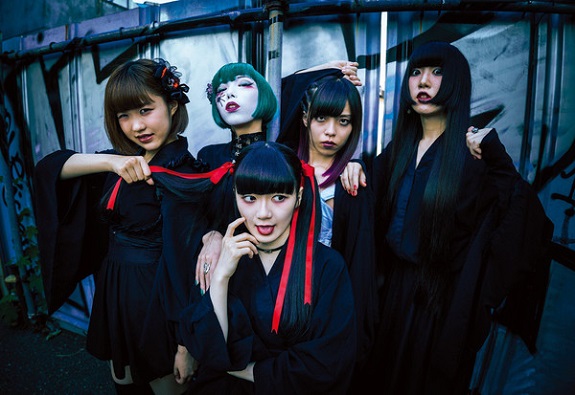 As I took my place on the lower level, I could really feel the power of the sound system, especially the bass.  It was vibrating throughout my entire body.  From the moment Necronomidol took the stage, I could tell they were on another level from the other acts on the bill.  The choreography, coupled with the music, was quite an experience.  I was also surprised to learn that Sari, the girl with the face makeup, is really the focal point of the group.  She has incredible stage presence.  Those of you who are fans of the 48/46 groups are surely familiar with the way many people describe Keyakizaka 46 member Hirate Yurina.  I think the same superlatives could easily be used to describe Sari.  By the way, eventually the vibrating heavy beat of the music became too much for me to bear, so I went back up to the bar area to watch the remainder of the show.  What I also found interesting was that their last song had much more of a J-pop style, and was quite a departure from the rest of their setlist, and the audience went absolutely crazy for it.  Here is their latest PV…

After over three hours, the show ended.  The four acts took their places in various spots around the venue to do Buppan services.  Necronomidol were on the stage, and had the biggest crowd scene by far.  Sari was the only member who I had any desire to take a cheki with.  However, I was unfamiliar with the group’s system, and their table looked like complete pandemonium.  I decided to skip it, and instead go home to enjoy some nice and mellow Christmas carols.

In summary, I did enjoy the show.  Though with the benefit of hindsight, I didn’t need to get there so early.  I would have been fine just showing up for the last two acts, which I often do when there’s a multi-group bill.  You show up when the groups you want to see take the stage, and leave when they’re done.  On the other hand, the hard-rock/goth idol thing just isn’t really my scene.  Not that I can’t hang; In America I have been to Iron Maiden, Metallica, Motorhead, and Judas Priest concerts on multiple occasions.  Not to mention I have seen Babymetal a few times.  But it just isn’t really the style I look for in J-pop.  Would I go to see Necronomidol in the future?  Maybe.  Although admittedly Sari’s pending graduation is a concern, as I feel she is such an integral part of the group’s identity.  We’ll see what the group dynamic is like once she and Hina graduate next month.

I attended another idol ensemble show last night in Otsuka, so please look forward to that writeup!