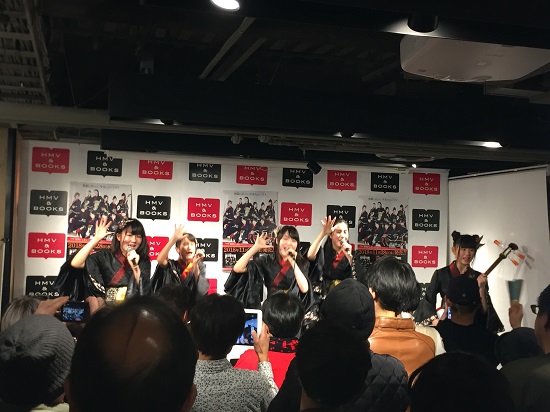 I mentioned in my last Mingaru event report that they had a slew of mini-lives coming up and that I hoped to attend some of them. In the meantime I have been battling a cold ever since Christmas. The cold medicine I have been talking has done a great job keeping it at bay, but last Wednesday it really knocked me out, enough that I completely forgot about Minyo Girls’ even at HMV Esola in Ikebukuro. However, I was heading to Akihabara on Friday night for the AKB kenkyuusei show, so I decided to medicate myself and spend the afternoon in Shibuya for lunch and Minyo Girls’ second set at HMV. After all, Yuua would be there, as well as Ramukyun. Two of my 3-top.

I actually got to Shibuya in time to see their first event, but decided to have lunch first. Unfortunately for me Shibuya was packed, and it was tough finding somewhere to have lunch. I ended up back at HMV 30 minutes before the show. Initially I ended up on the wrong floor and ended up in the middle of a boy band event on the 7th floor. Eventually I found my event downstairs. I picked up two CDs, and grabbed a spot in the back of the staging area. I ended up hanging out with the moms for the show. A couple of the fans asked me why I wasn’t at the Wasamin event at Sky Tree, but it wasn’t like a normal Wasamin event, there was limited space, and most of the people going were there to sing karaoke, which I wasn’t interested in doing.

As usual for their in-store or mall lives, half the group was there. For this show we got Yuua, Ramu, Rina, Minori, and Ryo. Interestingly, a bunch of the fans of the boy band came down to watch, it was a nice sized crowd. Unfortunately, the shop had them turn the volume really low. Much lower than the Boy Band event upstairs. I think part of the reason was because there was some sort of fitness supplement promotion also going on right next to the stage. As a result the show sounded quite muted. Also, Yuua had some sort of ’emergency’ where she had to leave the stage for a few minutes, and the other four had to cover her with a long MC. Luckily, Minori and Rina are good talkers, so they kept things moving. Among the songs they performed were her two singles and Akita Ondo, which I have mentioned is one of my favorites of their songs.

I was trying to decide whether to do two chekis with Yuua and Ramu, a signed cheki with Yuua, or what I ultimately decided, a group shamekai. Usually when you do a group shot, you go on stage, pose, and then briefly greet the members before you leave. However, one guy in front of me really took his time, greeted all the members before the shot, and then practically did a full handshake with all five members after the shot. The managers were trying to get the guy to move along, but you could tell they weren’t used to dealing with fans overstaying their turn. So when it came my turn, I knelt down, and asked Rina to choose a pose for me. She decided on the double-peace pose… 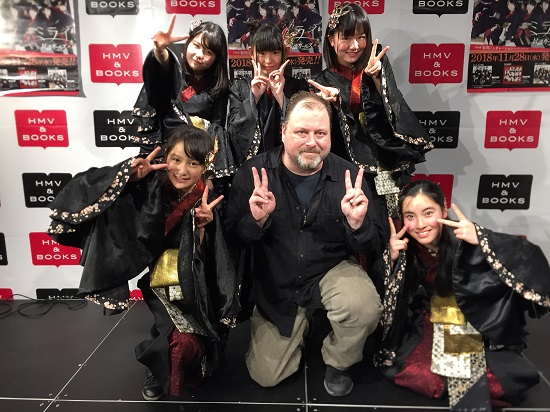 So this time I took a little longer to shake each members hands and greet them. Not nearly as long as the guy before, but I wasn’t going to rush off stage after they gave the previous fan so much time. 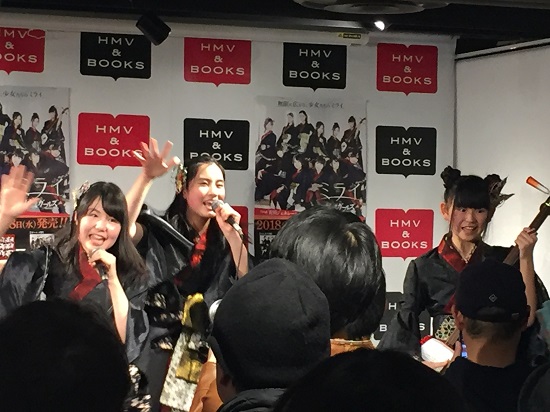 My next Minyo Girls event will likely be their one-man live in Shinjuku on the 27th. Since they aren’t promoting a single at the moment, they probably won’t have too many free lives in the near future. But you never know, they pop up in odd places. But my vacation has eight days left, so I will be much busier in the coming weeks.  From Shibuya I headed off to Akihabara since I had cancel machi for the Friday night AKB48 theater stage…

For the second consecutive time in 25 days I had a very high cancel machi number, meaning my chances of actually winning the show were very low.  I had Cancel Machi #130 December 10th, and #116 on January 4th. However despite losing I did draw a yellow chopstick both times which meant I got to through ‘High Touch’ with the members after the show.

As for the Pajama Drive stage, I am really enjoying Ranchan’s expanded role. She is still centering a lot of songs and running quite a few MCs. Also, the December show  was Omori Maho’s seitensei. So I had the opportunity to wish her a happy birthday, and I took a pic of her fan club flowers… 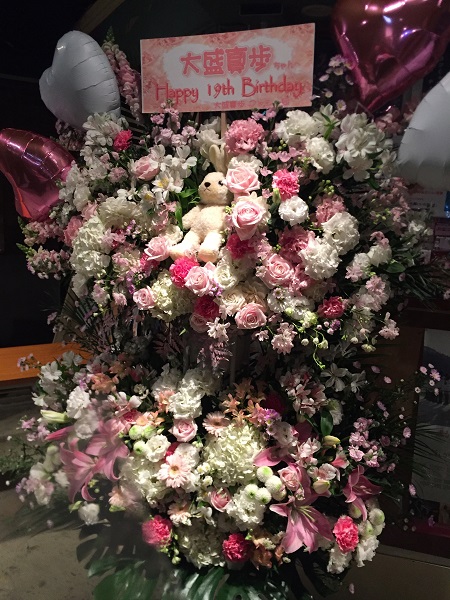 I was mildly surprised to see the way fans seem to be warming up to Okada Rina. To be honest my first impression of her was that she is a bit aloof, but it seems as if fans are drawn to her general sarcasm.

As for the High Touch, the nice thing is that the girls just assume I was in the theater for the entire show. This is why when I have done handshakes with the kks and draftees lately they always remark how they often see me at the theater shows. I don’t bother to correct them either.

I am pretty much guaranteed a great reaction from Ranchan, Sorachan and Hitomin. In fact, this week Ranchan began jumping up and down when she saw me, LOL.

Surprisingly, Sato Shiori has started giving me an extra special reaction. Satomina gave me a bright reaction in December, but January was more on autopilot.

I tried to get a reaction out of Ishiwata Sena, who I did a handshake with recently, but she was fairly non-reactionary. Katsumata Saori is usually bright and friendly.   I also got a big “English” reaction from Harima Nanami, which was a bit of a surprise since I have met her before.

Anyway, hopefully I will get a better “win” in the near future, as I am getting quite tired of getting these ‘nonvitations’ all the time.  The good news is that I won for one of AKB’s Request Hour shows, so that should be a lot of fun.