Wasamin is in the middle of a fairly active pre-release week, with events 5 out of the last 6 days, culminating with an event at Fountain Plaza in Sunshine City. Mind you, she has done pre-order events at Sunshine City before, but this almost felt like this was originally supposed to be a “Release Week” event, especially since it was taking place on the notorious “furage” Tuesday, coupled with a Sunday event scheduled at DynaCity, a venue where Wasamin has held her “Sunday Final” release week event on more than one occasion. All that said, there was a pretty good chance this event would have at least one nice surprise. It turned out we got two of them.

I woke up with a bit of a hangover after indulging in too much jalapeno-infused cider the evening before, and then going on a 2 1/2 hour subway trip where I fell asleep and missed my stop multiple times. So I spent the morning and early afternoon medicating myself as best I could since there was no way I was going to miss the event. I had recovered to the point where I merely felt tired, then grabbed the bus by my house which conveniently stops at the rear entrance of Sunshine City, arriving 45 minutes before the first event. 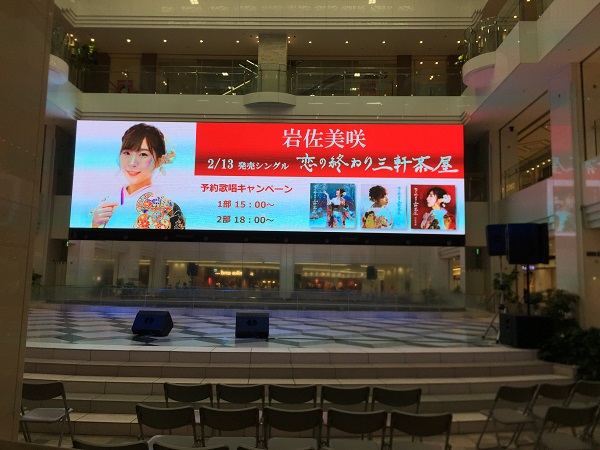 Sunshine City events are unique, as they have a seating area which is only reserved for people who purchased CDs, and you draw for your seating priority assignment. Also, regardless of how many CDs you pre-order, you can only draw a ticket for one of the two events. If you wish to have a seat for both, you must fill out two separate forms. It’s kind of a pain in the ass, but whatever, I’m used to it. I filled out one form and paid for my CD’s, opting for an early event seat ticket. I drew #39. Okay, it’s a small seating area. I could still probably nab a second row seat. After hanging out with a few of the fans and filling out a Wasamin birthday card, there was still plenty of time before we had to line up, so I filled out another form for two more CDs, this time opting for a late event ticket… 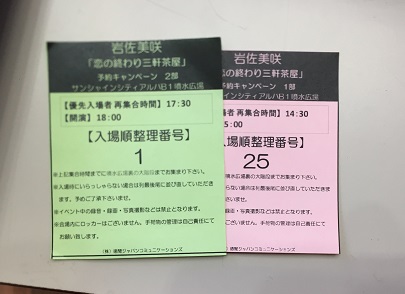 Number one with a bullet! Meanwhile, one of the other fans had multiple seat tickets, and upgraded my #39 to #25 for the early set. We headed back to the queueing area, which is on the exit stairwell near the Cold Stone Creamery. I looked like there were around 50 or so people in the pre-queue. As we headed in I had a choice, I could be in the front row on one of the ends, or 2nd row dead center, which technically is much closer to Wasamin. I chose the 2nd row seat. Finally 3pm rolled around, Wasamin took the stage while the fountains blasted into the air. Here is the early setlist…

Wasamin singing Wakara no Yokan, which is one of the c/w tracks on the new single, was a pretty big indicator of what was coming next. Wasamin admitted she was nervous as this was her first public performance of the song. It’s a bit of a change in style from her previous singles. My first impression was that it reminds me of Oshibe to Meshibe to Yoru no Chouchou. I also thought it might be appropriate for Wasamin to sing this in a slinky cocktail dress, as opposed to a kimono. I also liked the background harmonization, which was As for her performance, it felt like she was feeling her way through the song, as her voice kinda dropped a couple times in the verse. Unlike Sado no Ondeko, where she belted the song out right from the gate, this one may take a little tweaking in the coming weeks. Or at the very least would see how she does in the evening performance.

They lined us up for handshakes/2-shots by where we were sitting, which put me about 30th in line. The didn’t allow us to queue up until the first row finished. However they failed to notice at least one guy from the first row re-queued for a second visit before we were even called over. WTF? Eventually my turn came… 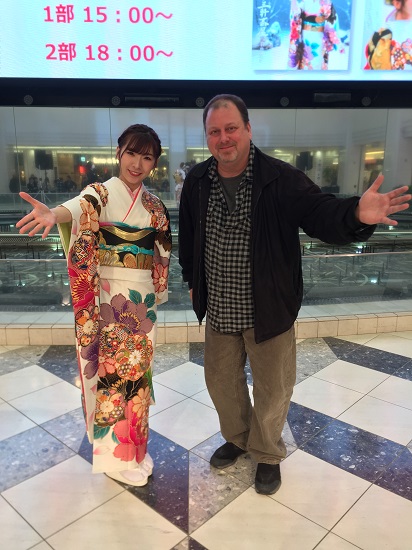 Oh, and if you haven’t seen the CD covers… 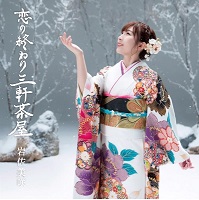 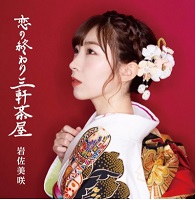 I never know what pose to do. Sasou-san though it was funny though. I congratulated Wasamin on the performance, and told her I want to hear the song again. She replied “aren’t you staying for the second performance?” To which I replied that not only was I coming, but I had seating priority ticket #1! I also asked her about the kimono she was wearing. It is supposed to be the same kimono that she is wearing on the CD jacket, but I noticed a few subtle differences. At first Wasamin was confused, and asked Ishikawa-san (Wasa-manager) about it. Ishikawa-san told me I was correct, and was surprised that I noticed the differences. I’m not sure if it is different, or they digitally changed it on the cover, or what. But it is indeed slightly different in a few spots.

From there I excused myself as I wanted to grab a bowl of soup from Soup Stock Tokyo. I have never been a fan of borscht, but they have a Tokyo Borscht that looks really good. However, I chickened out and instead went for their new Kimchi-Oyster soup, which was really good. I still had plenty of time, so I ended up resting on a bench upstairs until it was time for the late show. With my #1 ticket, I took my rightful place front row center. Here’s the setlist…

Despite both Wakare no Yokan and Anata being c/w tracks on the new CD, she has performed both songs in the past. In fact, she has performed “Yokan” on multiple occasions. I bring this up because Wasamin absolutely belted the hell out of Anata. It is such a dramatic song, and her voice was bouncing off the walls. I crowd suddenly got bigger, and the reaction she got was much bigger than I had heard the entire day. In fact you could hear people cheering from pretty far back. After that we got her second performance of Sangenjaya, and her vocals sounded much cleaner than on her first try. That said, I think it will take at least a couple more performances for her to truly own it. BTW, she does this cute little hand motion during the chorus, forming a sort of triangle. She explained the reason for it before the song, but I didn’t understand the explanation. Also, during the instrumental portion of the song she turns her back on the audience and raises her arms, so you get a full view of her kimono. It is similar to the “poses” she does during Sado no Ondeko. After the last song Wasamin informed us that there was one more surprise; The full MV of Koi no Owari Sangenjaya. Here is the MV preview, which Tokuma released around the same time as the video was shown…

According to Wasamin she hadn’t seen the completed video before, and she was excited to be watching it for the first time together with her fans. She was excited to see our reactions. Not only is the song a departure from her usual style, this video is also a bit different, utilizing actors to dramatize the song’s story. At first I was wondering why they didn’t have Wasamin act as the girlfriend in the video, until she explained that the two actors, Takuma Zaiki (from Prince of Tennis) and Kanae Yumemiya are both from NagaraPro, so a bit of cross-promotion for Wasamin’s teammates. 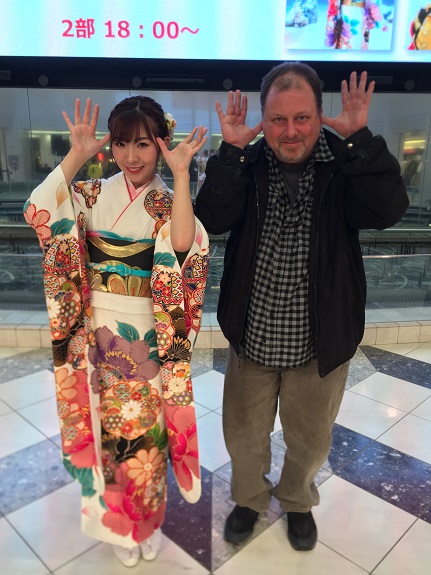 This time I was around 15th in the queue. Again, I am always wondering what pose to do, and at the last second I chose this one. Wasamin didn’t understand what the pose meant, although her assistant seemed to be familiar with it, and was laughing. I explained to her that it is kinda of a child’s pose, like “Nya Nya Nya Nya!” So she got it. I felt I needed to give Wasamin a review of the MV, so told her that I liked Wasamin’s expressions, which almost seemed like a reaction to what the actors were doing on screen. I also told her that her Anata performance was incredible. I told her I planned on attending the next event in Odawara, and was on my way. It was getting late, I was still tired, and wanted to get back home and in my warm bed.

I came home and immediately searched the internet to see if Tokuma had released the MV, and sure enough there was a preview posted online. Now that she is singing her new material I am really looking forward to the event this weekend. Not only do I want to hear how she is progressing with the new single, but I am hoping she sings Anata again. It is interesting how they chose to tweak Wasamin’s style a bit for this single. I think they are really trying to find a song that catches on with the public so that she takes another big step in popularity. Could this be that song?  We’ll see.

Oh, and one additional bonus.  I forgot to post this here, but Cécile Corbel, who Wasamin performed with in France last year, posted a produced music video of their duet of the song Sayonara no Natsu.  It is very pretty, so please enjoy.