It is one month until the release of Wasamin’s new single, and this week she embarked on a series of promotional events covering Western Kanagawa, Shizuoka, Mie, and Aichi Prefectures. Being that my life is about to become super-busy for the next three months, I wanted to at least attend one of the events this weekend, the closest being the event in Odawara at DynaCity.

Of course “closest” is a relative term in this case, as Odawara is a fairly long trek from Tokyo. If you go by Shinkansen from Tokyo it takes around 35 minutes at costs close to 4000 yen each way. I instead chose the Tokaido Line, which from Akabane station takes around 100 minutes. But it is one-third the price of the Shinkansen, and stops at Kamonomiya Station, which is much closer to the mall than where the Shinkansen stops. All things considered, I would probably only save 30-40 minutes door to door via the Shinkansen. Not to mention I enjoy the leisurely walk through the residential neighborhoods from the station to the mall.

DynaCity, which has gone through some pretty big renovations since the last time I came here, was hosting a whole bunch of NagaraPro artists over the weekend. On Saturday it was Minyo Girls and Hayabusa alternating live events. For Sunday Wasamin was alternating performances with NagaraPro newcomer Tatsumi Yuto, whose debut single last year is really nice…

After my 2+ hour journey from Northern Tokyo, I arrived at the mall around 30 minutes before Wasamin’s first event. Yuto-kun was in the middle of his meet and greet, and people were beginning to queue for Wasamin. Like at Sunshine City, DynaCity also employs a priority seating policy where CD buyers get first crack at the seats. In fact, technically I was there early enough to get a priority ticket, but I was extremely thirsty, so I decided to get something to drink instead. By the time I came back the seating was completely full. However, I did my CD preorder, receiving a priority ticket for the late event, and taking a spot in the standing area. I had just put on my Happi Coat when Wasamin took the stage. Here’s the early setlist…

Usually there are more than a few regular Wasafans who camp out in the standing area, but this time I noticed I was the only one, which made me stand out a little bit, especially during Niji no Watatte, where we do the Wasamin call inside the verse of the song. The first time I screamed her name at least a half-dozen people jerked their heads around like “WTF?” LOL. Wasamin debuted two of her four new c/w tracks on Tuesday, so I guessed she would probably sing the other two today. That was pretty much confirmed when she sang Ohisashiburi, ne as the third song. Of course she finished with the new single, and as expected any kinks in her Tuesday performances seemed to be ironed out. She sounded great! Immediately after the last song a handshake queue was formed to the right of the seating area, I was able to get a somewhat closeup spot in the queue, lining up around 20th or so. I had pretty much decided which pose(s) I was going to do today. 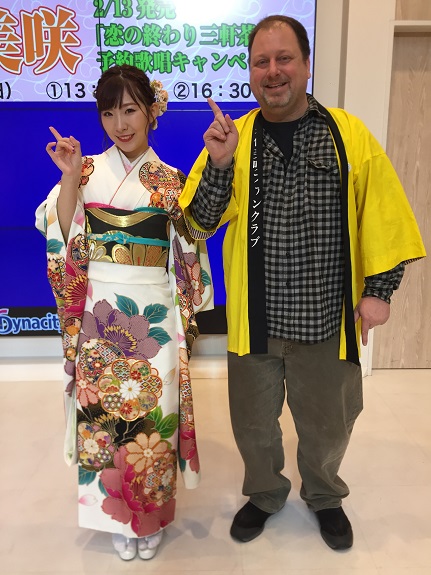 Since this is a new song, that means it’s time to learn all the new ‘hand gestures’ Wasamin does while performing it. It’s a fun little exercise Wasamin and I often talk about. (It’s an idol-fan thing, she usually exclaims) She does a bunch of cute little hand gestures throughout the chorus of the song; waving her finger back and forth is one of them. In any case, I told Wasamin that I when I got home Tuesday night I found the new MV preview online, and had been watching it repeatedly. Furthermore, the more I watched it the more I love the song. She thanked me. They seemed to be pushing members through a little bit faster than usual, probably because they had to make sure they finished in time for Yuta-kun’s next performance, but I would see her again in a little bit.

I had over two hours until the next Wasa-event, and decided to go up to the top floor of the mall to check out their new food court. When you consider all three wings of DynaCity, plus the connecting Ito-Yokado mall next door, the food choices are practically infinite there. There are like four separate food courts. I ended up going to their new Kaitenzushi and then camped out at the ChocoCro where I cashed in two free iced coffee coupons I had been holding on to. In the meantime I ran into Kentaro-san, who helped me decipher all the ‘Ichigo Bonus’ benefits of Wasamin’s upcoming solo concert.

I made it back in time for the priority seating call, and despite only having ticket #34 scored a front row seat on the right side. i was eventually joined by Caster-san, who had missed the early event to attend the kenkyuusei concert at TDC Hall. I wasn’t aware that Caster was a Honda Sora fan, but he arrived wearing his Ozora Tsuinzu t-shirt and holding his Sorachan uchiwa. Meanwhile we were all talking to and cheering Yuto-kun, who was just finishing up his fan handshakes. It would only be a few minutes until Wasamin took the stage. Like the first show, the Tokuma rep attempted to warm up the crowd by starting a pre-event Wasamin call. The late setlist…

As expected, Wasamin sang the 4th her new c/w tracks. And now Sado no Ondeko has officially graduated into a “past single” that will be rotated as the opening song of her live events, a fact she noted herself during the first MC. My seat was right in front of the speaker, so the sound was very loud for me. BTW, Wasamin has been heavily promoting her DAM Channel appearances, where she hosts a regular show. If you search around YouTube a few episodes pop up from time to time, but I think you have to have a Live DAM subscription to see it legitimately. She did mention her upcoming solocon as well, but since it is sold out she doesn’t promote it too heavily. Also, I had a great opportunity to jump to the front of the queue after the show. I could’ve been first in line, but waited for someone else to queue first and then lined up behind them. It wouldn’t be long before my turn. In fact, I was already getting my pose ready on stage, but they screwed up the first guy’s pic. It was cute though, Wasamin was the one who came up to me, and apologetically asked me to wait a moment… 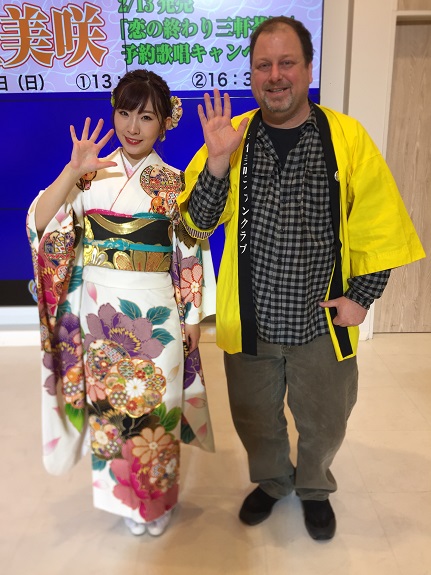 So this is another one of the hand gestures she does in the chorus, a kind of back and forth wave of her hand. There are a few other cute hand gestures she does, although the main one, the ‘triangle’ gesture would be sorta hard to demonstrate in a still photo. Instead she and I did it together while we were talking at the table. I also told her that I had spent part of this week watching all of her concert DVDs. She thought that was cute, LOL. Since I had a long train ride home, I didn’t want to hang out all night waiting for the handshakes to end, so I bid my goodbyes and started my trek back to the station, catching a 17:35 train which got me back to Akabane around 19:15.

With the benefit of hindsight, I probably should’ve spent the night in Odawara, and then attended Wasamin’s event in Fuji today. The sky is completely clear, and the view of Fuji is probably spectacular. But it’s probably good that I stayed home instead as this is the final day of my five week vacation. As of tomorrow, it is back to the grind. My next Wasamin event will be her solo concert on the 26th. I’m sure it will be awesome.  And coming up next weekend, AKB48 Request Hour and a 48-group handshake event.  Now THAT should be interesting.