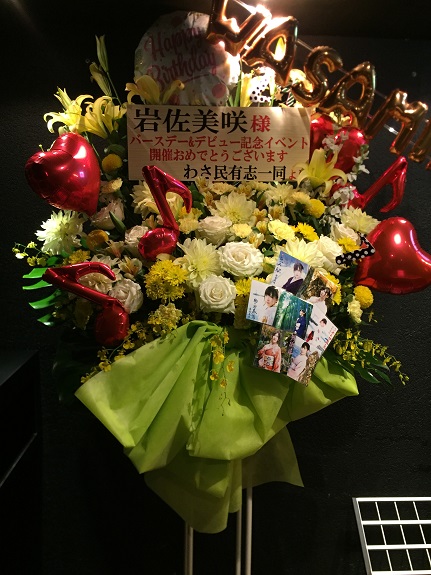 This event was announced back in November during Wasamin’s ‘Love Live’ concert; a Fan Club event on the 7th anniversary of the release of Mujineki. Of course it was also doubling as a Wasamin birthday party, since her actual birthday fell on a Wednesday this year. We knew from the beginning that the party was scheduled for a Friday, but what we didn’t know until the tickets arrived was that it was scheduled for 1 p.m., right in the middle of the day. This could be an issue for a lot of people…

In fact, at first I wasn’t sure if I could go. Not only do I have class on Friday, but I also have work. I checked the train schedule, and technically I could make it to the event if I went straight from my Japanese class. Work was another issue however. The good news was that I had yet to select my days off for the coming months, so the first chance I had I put in a request to have this day off, which was granted. That was a relief. Although I didn’t really have any time to search for a birthday present, so I was coming empty-handed. I’m a bad Wasafan, I know.

So cool, I just needed to get through my Japanese exam, and I was off to see Wasamin. In fact I finished my test a few minutes early, which gave me a head-start. Everything was going as planned until I arrived at my transfer station and found out the train was delayed. Shit! I could wait it out on the Asakusa Lineplatform and hope the train arrived soon, or I could take another route which would definitely make me late for the event. Finally the train arrived, and dropped me off at Higashi-Ginza station just as the event was schedule to begin. The venue was a block from the station, so it only took me around 3-4 minutes to get there.

Surprisingly, when I arrived the event hadn’t even started yet. I checked in, and was given an assortment of paper; a birthday card to fill out, a question sheet, a quiz form, and a feedback form. I noticed the seats were numbered, but wasn’t sure which seat was mine. It turned out I was in the front row, NICE! I sat down, changed into my Happi coat, put my stuff away. It turned out Wasamin was running really late as well. The event ultimately didn’t start until 1:20 p.m.

By the way, she looked adorable in that outfit. Wasamin is very stylish, while at the same time she dresses quite conservative. But she is absolutely stunning. After a brief greeting they brought out her birthday cake, being extremely careful not to drop it, especially as they climbed the steps to the stage. After a round of ‘Happy Birthday to You’ we were treated to a photoshoot session. Since I was in the first row, I was in the first group. And per usual I was off to the side. 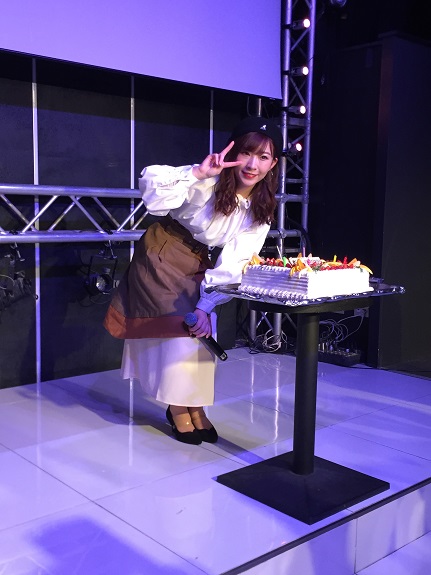 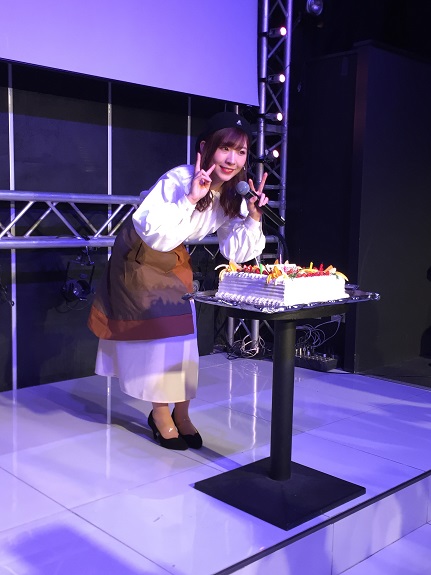 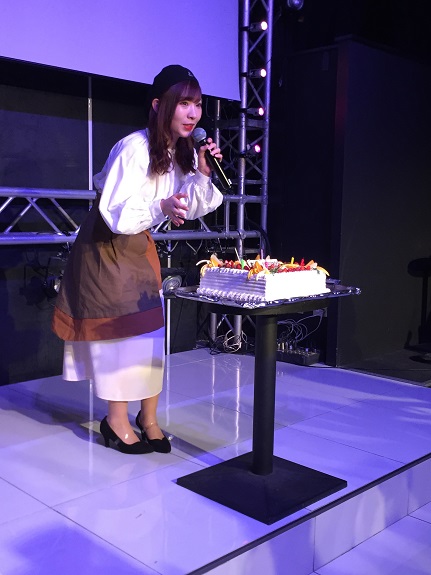 There was also a film crew from DAM Channel present. Wasamin has a show for Live DAM subscribers, and they were filming a show opening for her next episode with all of us in it. It took a couple of takes for the fans to have the correct amount of enthusiasm, but we got it done. Next we got a mini-live of sorts. Here is the setlist…

Since Benoa is part of Pasela Resorts, they were using the Karaoke System for Wasamin’s performance. So for some of the songs, including Mujineki, we were watching the actual MV of the original artists. In fact, I caught Wasamin glancing up at the monitors a few times during Mujineki. It was also neat to hear Wasamin perform that Aimyon song, since it just came out a couple months ago. Neraiuchi, which she sang for the first time at her concert last weekend, was again a lot of fun. 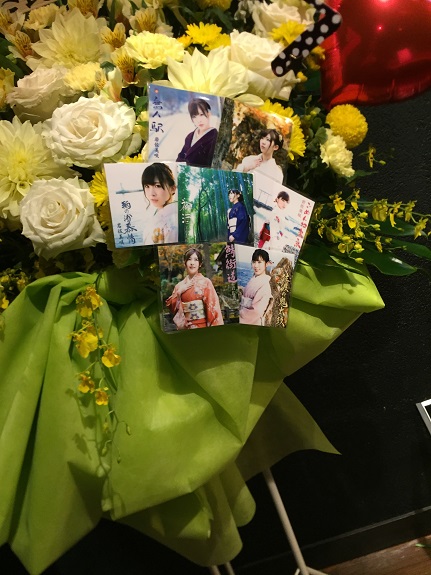 Closeup of the Wasa-flower decor

The Wasamin Quiz was quite difficult. The top score out of everyone who was there (around 125 people) was five out of seven. The questions were…

1. What anime character is featured on the Tokuma Homepage? (I had no idea)
2. I didn’t understand the question, it was a choice of three numbers having something to do with her blog.
3. In which prefecture was the Mujineki MV filmed? (I should’ve gotten this one, I knew it was a northern prefecture that began with the letter “A” and guessed Aomori, it turned out to be Akita)
4. What was Mujineki’s 1st week Pop Single Oricon Ranking? (5th, I knew this one)
5. What was the 2nd song Wasamin sang at her concert on Saturday? (Ryoshu, knew this one too)
6. Which hand would Wasamin throw in a game of janken? (I guessed scissors, she threw paper…and lost to Ichikawa-san, who threw scissors, LOL)
7. What did Wasamin have for breakfast in Yamaguchi on Thursday morning? (I was close. I knew it was a hot beverage because I remembered the photo she posted, and guessed Hot Chocolate. It was Cafe Mocha) 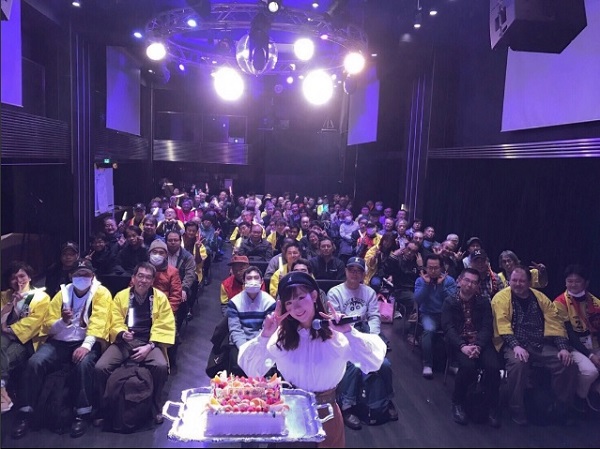 Finally there was a Q&A session, and again Wasamin pulled the questions randomly out of a box. I usually don’t submit questions since I can never think of what to ask her, although this time I did have a question in mind. Since I was late I didn’t have a chance to submit it. Oh well. 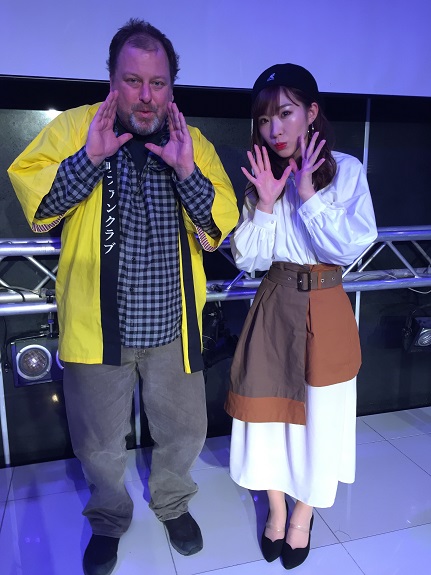 We ended with a 2-shot handshake session. I chose a “blowing out the candles” pose since 1) it was her birthday, and 2) she had a rough time getting all the candles blown out earlier. I told her that I was rushing to get there after my Japanese test, and told her about the train issue.. She replied that she was happy it turned out that way so that I didn’t miss anything. I didn’t have the chance to apologize for not bringing a birthday present, but I will get something for her next week during her release week festivities. 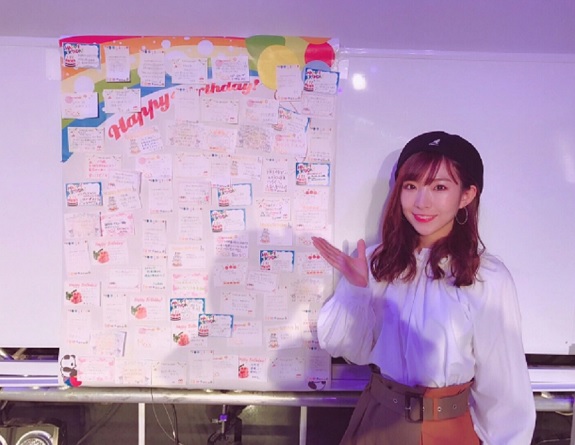 After that I wrote her a message on my birthday card and affixed it to her birthday poster. After that I was off. I had a 2 1/2 hours to kill before I had to be in Akihabara for the AKB Kenkyuusei stage, which I had cancel machi for. So yeah, it was a long day. Luckily I have no plans for the weekend, so plenty of time to catch up on homework.