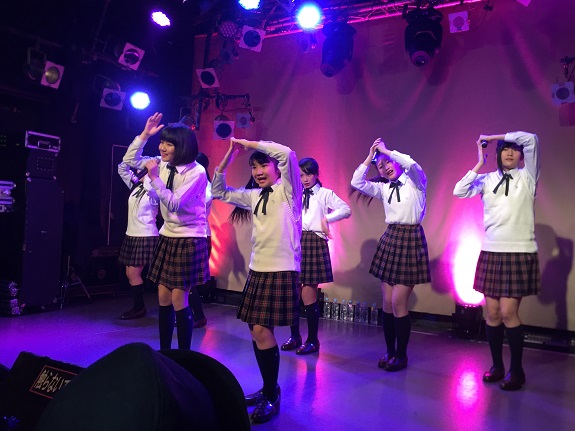 It seemed like it had been quite a while since I had seen a Mingaru show. In fact, the last time was just after the first of the year in Shibuya, and before that the Christmas ~fiery performance~. I had a ticket for their January one-man live, but ended up skipping it to see Wasamin. So I was looking forward to the show, except…

When I checked the lineup a couple days ago, I noticed that my “2-top,” Miyabi and Yuua, would both be absent for the performance. Oh no! What would I do without my two favorite girls….oh wait! 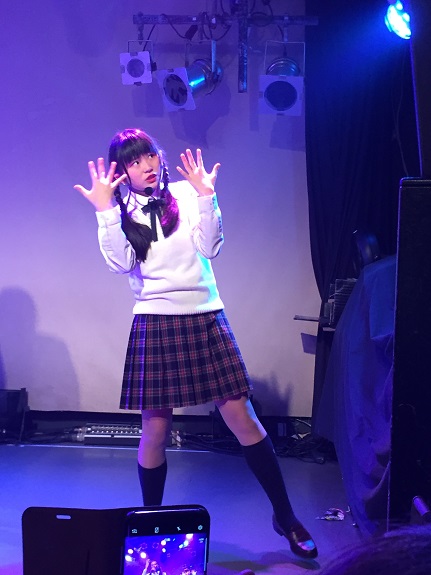 This would be the PERFECT opportunity to spend a little time with my Mingaru “secret oshi” Ramu-kyun. Ya know, the more I pay attention to Ramu, the more interesting she is. For starters, she has that slow, sing-song speaking voice, which everyone finds adorable. It’s almost like she doesn’t know how to speak. Except if you check out her personal twitter, she constantly makes some of the most verbose and silly posts an idol can make. Sometimes it’s hard to believe it’s the same girl. Moreover, this past week she seems to have discovered the TikTok application, which has brought her goofy antics to another level. Oh Ramu-kyun, I look forward to having fun with you this weekend! 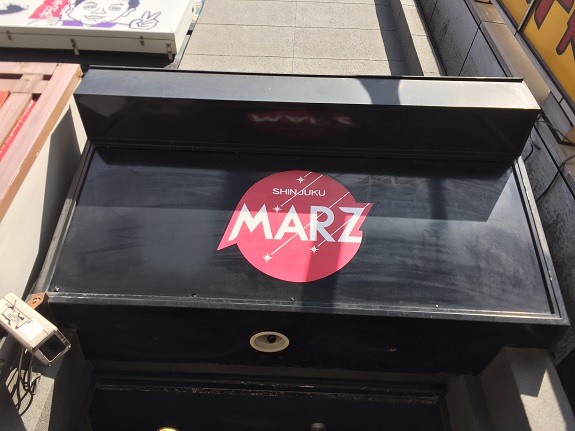 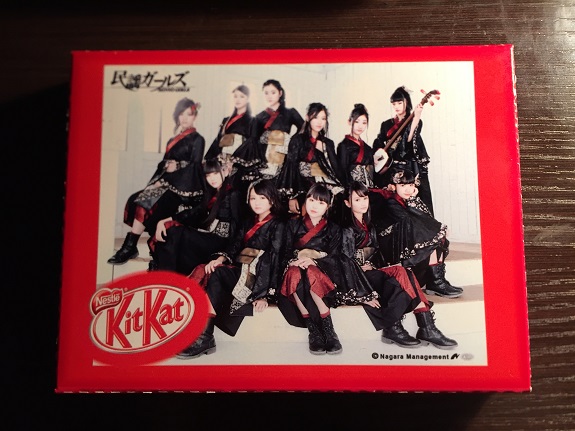 I headed out to Shinjuku early enough, and arrived at the club with plenty of time to spare. Our first treat was a Valentine’s Day special Kit Kat, with the members on the packaging. (Wasamin had a special Kit Kat just like this a couple years ago) Rinacchi was at the door handing them out to us as we entered the venue. Shinkuku MARZ is pretty much all standing area (with the exception of a small seating area for the members’ families) and is first-come first-served. Per usual, I scouted out a spot on the right side, opposite where Ramu-kyun usually stands. I was one back from the stage, with two relatively short guys in front of me. In what seems to be a tradition, random people will come over and try to squeeze into the cracks up front to be closer to the stage. In fact, one guy tried to take the spot reserved by one of my Wasa-buddies, but when he came back from the goods table he pushed the guy back, LOL. I was pretty thirsty, so I decided to head to the bar for my prepaid beverage, and when I returned nobody had tried to take my spot. Good! It was time for the show to start. 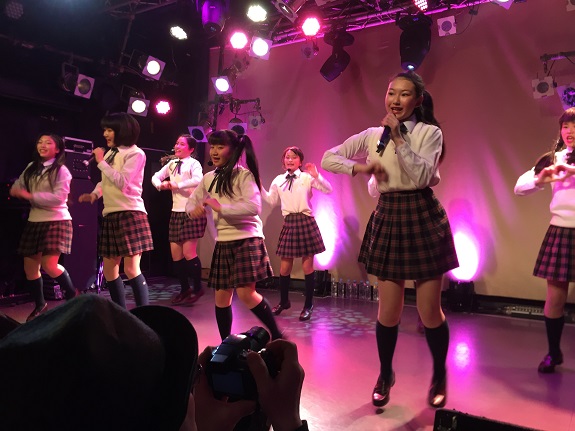 Instead of their usual “one member at a time” entrance to the stage, they all came onstage together. They were wearing their outfits from the recent single, and performed three songs from the release, in including Mirai and Love♡Metal, which to me sounds like a song one would find on a Babymetal CD. Seriously, and it’s a really cool song too!

After a quick MC where the members introduced themselves, they quickly ran offstage as we watched a short VTR. The video summarized the dates of their upcoming live shows, and contained video greetings of the three members who were absent. A couple of the performing members had hinted on social media that they would be wearing school uniforms as the theme of the show, which was Valentine’s Day. Sure enough, they returned to the stage in what seemed like the same outfits from their 2nd indie MV, opening up with Koisuru Fortune Cookie before splitting into smaller units…

Chocolate Disco sounded about as good as you could expect a techno song to sound being sung by two young girls with no voice affects. Although Rinacchi is a good singer, so she sounded alright. I didn’t know the song Kako and Izumi performed, but it was definitely out of Kako’s range, which made for a few cringe-worthy moments. Minori singing solo was a surprise, and she wasn’t bad at all. The three cutest members doing a cute song at the end was all sorts of win. The rest of the group participated in the final chorus.

The monthly prize giveaway was a signed program from the event in Cambodia the girls performed at earlier this week, along with another box of chocolates, and of course I didn’t win. No matter, IMO it wasn’t one of their most memorable prize giveaways. They performed three more songs before leaving the stage for an encore. Oh, and I noticed during the final set that Ramu had busted all of the strings on her shamisen during the last three songs, but kept on pretending to play as if nothing was wrong. When she came back out for the encore the strings had been repaired. 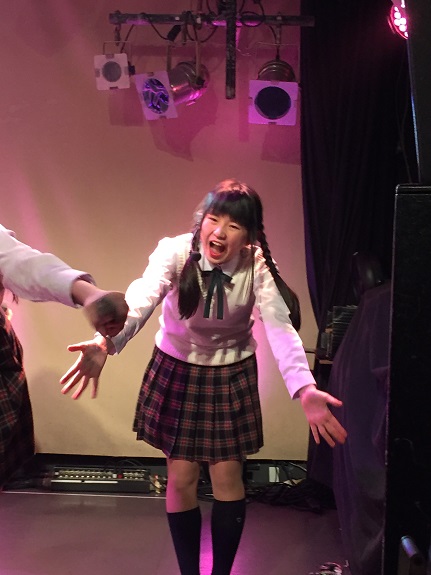 Well, the highlight (or lo-light) of the encore was the graduation announcements of Kako and Izumi. Both of them stated that they wished to focus more on their high school studies, and that balancing being an idol and a good student had been a challenge. Their final show will be the next one-man live at the end of March. It didn’t seem like the announcement was a big surprise, to the members or the audience. That said, Ramu-kyun was crying her eyes out through the entire speech. Minori made a speech afterwards in tribute to the pending grads, and that seemed to affect all the members. The show ended with the girls doing a tearful medley of Ureshii Namida and Mirai. 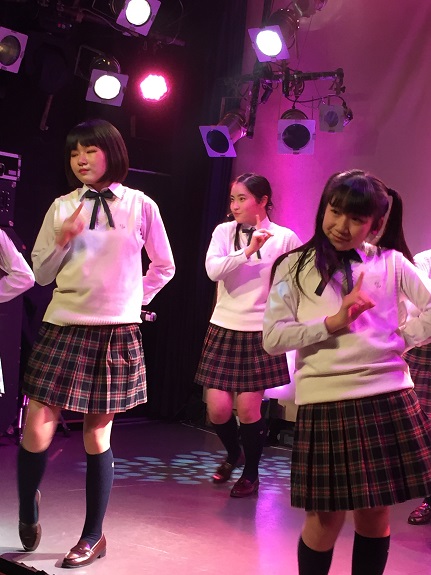 I hadn’t yet purchased anything from the goods table since the line was really long before the show, so I immediately queued up. My plan was to purchase two tickets for the March one-man live (for me and a friend) which would give me four tickets to play with. I knew I wanted to take a cheki with Ramu-kyun, the rest I would play by ear. I decided not to do a group shot since Yuua and Miyabi weren’t there. When the queues opened for the individual members I went to Ramu’s line first. Only they weren’t offering chekis, just shamekai. Well, okay…

Posing with the Kit Kat. They don’t give you too much time to talk during 2-shots. Well, that depends on which staff is taking the photo. Some are a lot more lenient than others, so I didn’t get much time to talk to Ramu. There are a few things I really want to talk to her about too! Up next, I queued for Yutori and another shamekai…

Yutori always seems so thankful when people come to take photos with her, especially if they aren’t her regulars. She used to be the center girl for this group way back in the beginning, then sorta took a backseat when Miyabi and Yuua emerged as co-centers. But she’s a really sweet kid. And it’s amazing to think that once Kako and Izumi graduate next month, tiny Yutori will become the oldest member of the group. Sheesh, she still looks like the youngest!

So I waited around for the cheki portion of the event to start. In the meantime I watched the two guys who at every event do a huge photography production with a bunch of members. They bring lighting, reflectors, the whole shebang. Frankly, I think they are taking advantage a bit since they ultimately spend a ton of time with each member just “setting up,” but they do seem to spend a lot of money at each event. And now that the girls are keeping track of how many photos and signings they individually sell, I am sure they are happy to get the business.

After that they started the “item signing” portion of the event. Huh? When are they doing chekis? I asked one of the managers, “you aren’t doing 2-shot chekis anymore?” She kept repeating that I could buy 1-shot chekis and have those signed. But I wasn’t interested in that, since the 1-shot chekis are random, and the one time I bought them I got a bunch of members I wasn’t a fan of. So I confirmed that I could save my remaining tickets for future events, and took off for lunch. Taiyou no Tomato-men. 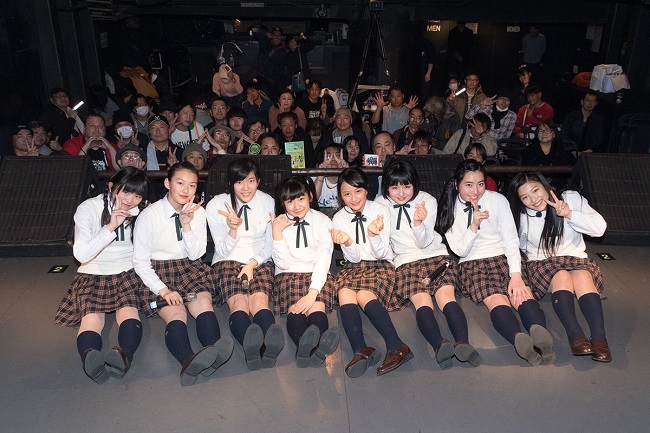 As for the graduation announcements, Kako didn’t surprise me. For one, she is the oldest member by far. Plus, she commutes in from Nara Prefecture. She is also one of the least popular members, so…there ya go. Izumi is a bit more of a surprise, especially since she was recently named Captain of the group. But again, she is also an older member, and not among the most popular. So I guess that means Yuua will be promoted to Captain, and if they name another co-Captain, maybe Minori? Rinacchi? We’ll see. 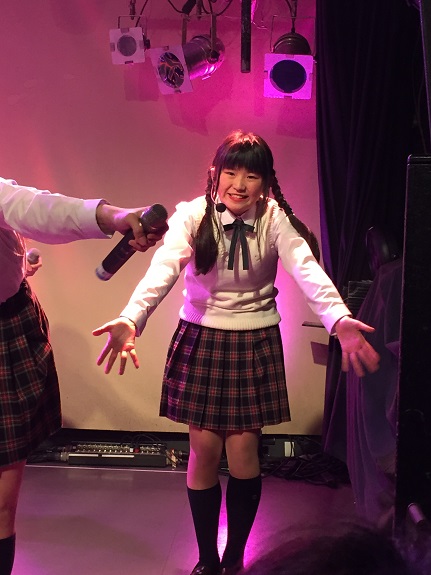 I’m also wondering when they might announce a new single. They are about due.